What could this possibly be? (not my chickens)

I'm in my 70's too. I have several cameras up on my property and most nights see a predator on at least one of the cameras. Often times I see the same predators. Some can be distinguished by unique markings or injuries. Whatever it is, has probably been lurking and it will keep coming back. Since it likes chicken put some chicken in the trap. That is what I do. Could be a fox. This is the time of year when the kits are now left to hunt for themselves. I have been seeing some on my cameras. Good luck...

I let the fox take the bait for a few days then set the trap. This fox was coming around during the day and killed my special favorite hen. It was my fault. I let her out and got distracted. I still hate myself for not putting her back into her pen while I was distracted. 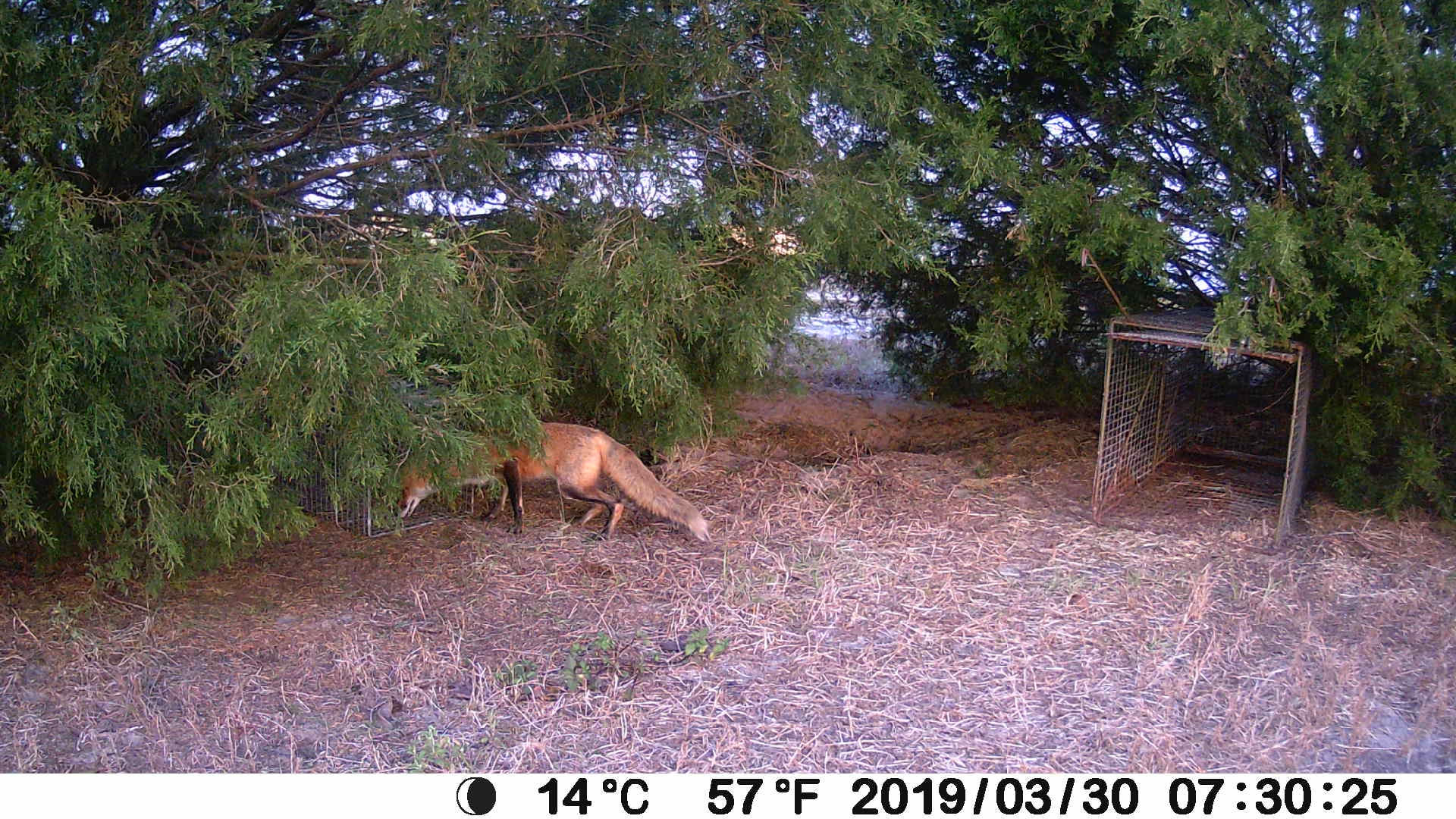 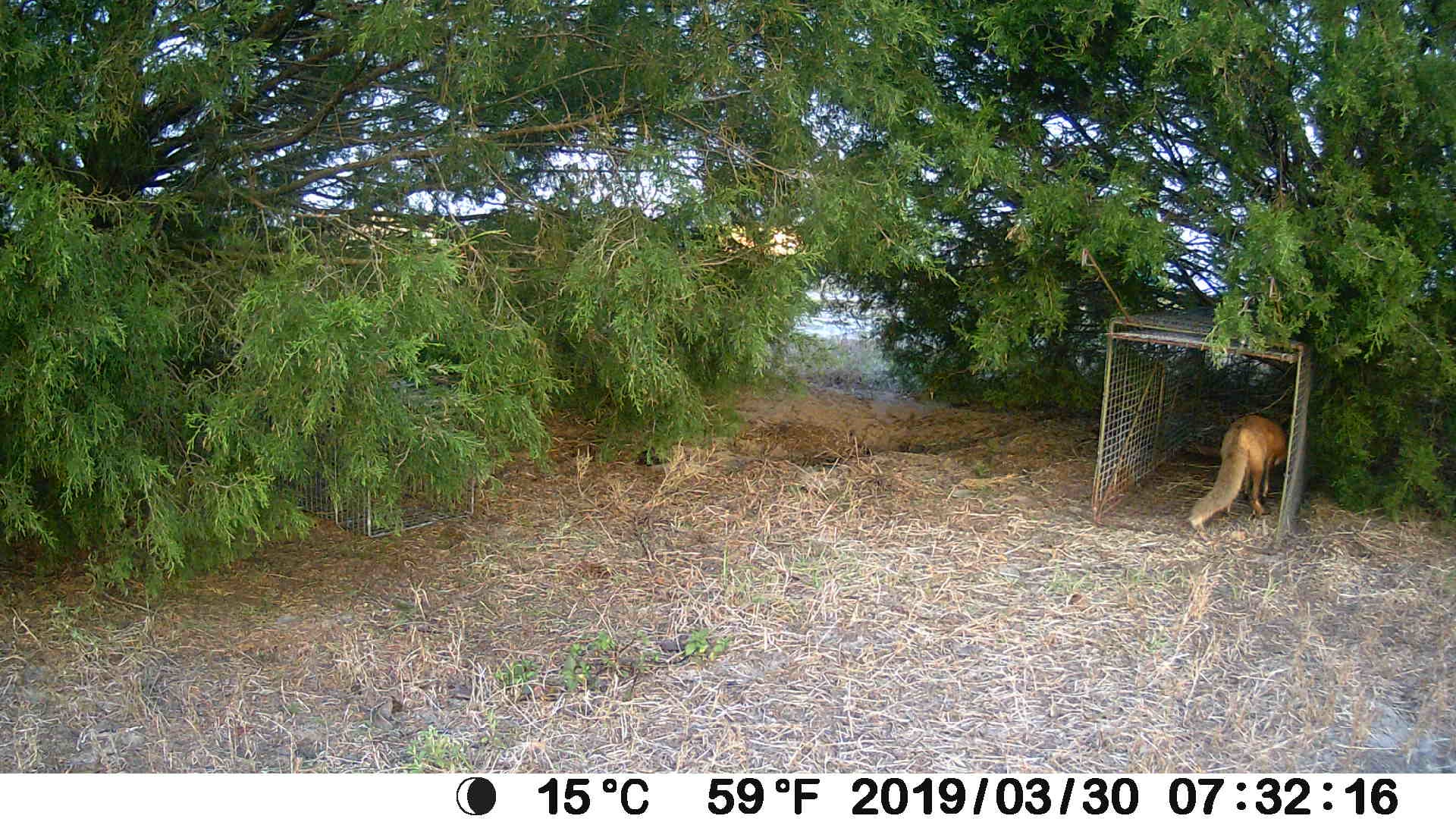 In the pictures above I also had a trap out for a coyote. I used a body of a bird that was killed as bait. The coyote wouldn't go into the trap but a leg was sticking out and the coyote grabbed the leg and pulled the trap over then tried to dig under the trap to get the bird. You can see where it dug in between the smaller trap and the larger one. It's a big trap 5' deep. 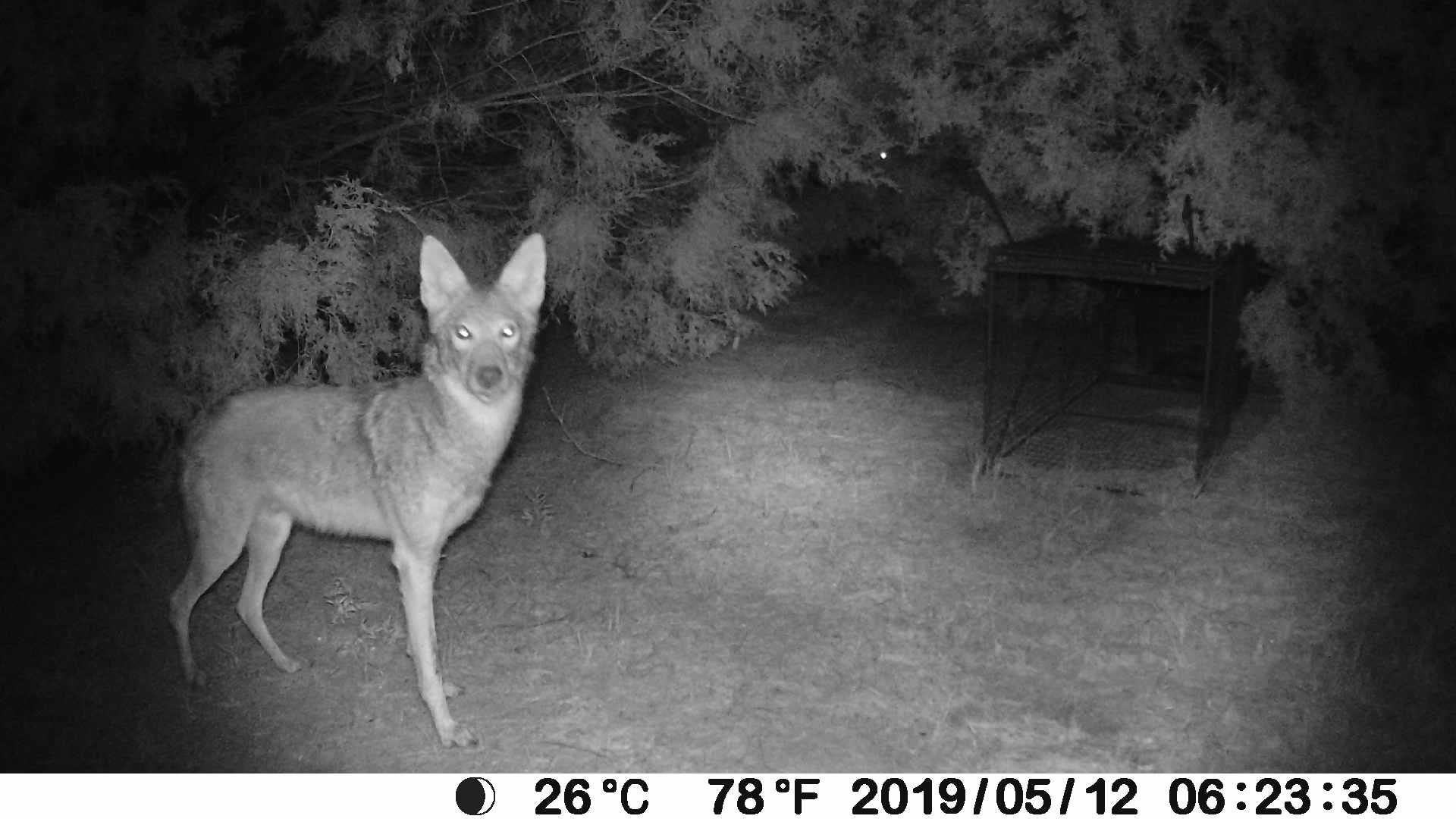 cmom said:
I'm in my 70's too. I have several cameras up on my property and most nights see a predator on at least one of the cameras. Often times I see the same predators. Some can be distinguished by unique markings or injuries. Whatever it is, has probably been lurking and it will keep coming back. Since it likes chicken put some chicken in the trap. That is what I do. Could be a fox. This is the time of year when the kits are now left to hunt for themselves. I have been seeing some on my cameras. Good luck...

Thank you! I think I'll talk about getting him a game camera set up. We have. a big trap like yours so maybe he needs to use ours because all he has are the smaller ones I think. We'll tell him to use chicken in the trap.

penny1960 said:
Cover the chainlink with hardware cloth weasle can get in the chainlink .. Chainlink alone is no security for birds
Click to expand...

Good idea, I will mention that to him when we see him next.

Since the coop is basically wide open, I'd suggest running a few lines of electric wire around the pen, starting quite low to the ground and keeping a very small gap between them. He can use a solar charger.
J

Oddly enough, I was having a problem similar to your neighbor’s, and I just found the culprit! I don’t have nearly as many birds as Bob had, but I was having issues with one or two of them being killed or going missing every so often. Often I’d only find part of a wing left, but occasionally I’d find a whole bird, with its butt ripped off! I’d seen an opossum in my muscadines a few months back but didn’t think much of it. Tonight I was awoken by my birds hollering in their coop. I went out in my bare feet even, just in time to see the opossum coming out of the coop and then run off. It dug a small hole at one corner—I hadn’t seen it because the nest box on the outside wall hid it from view. And although most of my floor is plywood, one area is sand with chicken wire dug into the ground. The darned opossum managed to get in around the chicken wire! Anyway, I went in and found one of my birds with a bunch of feathers missing from her backside and a 1” wound right at the fat pad. She’s inside for now, I filled up the hole at 2am, and tomorrow I’m going to put some cement on the floor of the coop, then cover that with sand. I also read (on BYC) that lights are good deterrents for opossums, so I moved a solar motion detector light next to the entry point, and will be fixing it to the coop properly in the morning.

Since you mentioned Bob saw an opossum at one point, and it doesn’t sound like he’s had a massacre—sounds more like a slower trickle of attacks—I wonder if he’s experiencing the same predator I am?

We have possums here in Southern California. The other day the Santa Ana winds were cranking and I went out to check my chickens food and water. I have 2 coops attached. One I used shade cloth across the side of my house using the 6ft block wall and my house. The first little coop I had is inside there and we added the outer 8x4 coop to it. I put a pair of nesting boxes on top of the little coop as it helps when the wind is blowing so hard.
Anyway I went to check and I see this furry thing curled up in the nesting box. We have a young kitten so at first I thought oh the cat is here. But at second glance it was a young possum! I know how it got in and at night they have no access to my girls because the coop is closed.
I wondered if it might be hurt because when I touched/petted it he didn't do much except it's natural defenses, open mouth, drooling and hissing and that was almost non-existent. Closer to dusk I went and bothered it further to check for injuries or illness and found nothing except his tail was missing some of its length but it was an old healed injury.
I took him into the yard and was hoisting him onto our 6ft+ block wall as he peed and pooed on me. Lol. Haven't seen hide nor hair since. He just decided to sleep in the snuggly box with the hay!.

We feed a couple neighborhood cats and occasionally a possum will eat their catfood. They eat rodents and snakes but will eat the eggs and chickens too.Be careful.It will be back.

C
What happened to my chickens?
2

What attacked my roo
2