*What if Chickens ran The World?* RP!

A) By participating in this game, I promise that all BYC Rules will be followed and that I have read and understood the Role Play Rules that are in a sticky at the top of the Games forum.

B) I promise that all content is to be rated G and suitable for all ages.

C) I promise that there will be no swearing, cursing (including censoring by using symbols) or inappropriate adult sexual activity or innuendo. This extends to mating, breeding or innuendo in non-human characters as well.

D) I promise to treat others with respect and kindness as is the BYC way.


@Kaylas Chickens @Brahma Chicken5000 This is a continuation of #TeamWendy.
You are a chicken. ANy type you want. No clue what you want? Ideas in the poll

It's happened. America is now ruled by chickens. The humans are finally gone. They've gone away. Wendy is the President. Just have fun and roleplay as a chicken. You have intellgence. Use it. We all free-range in a GIANT(!!!) coop and run. Have fun

Name-
Age-
Gender-
Breed-
(If hen)Color of Eggs-
LOoks-
Personality-
Part of Government?-
What did you do when humans were around-
Extra-

Name- Sephora
Age- 8 months
Gender- Pullet
Breed- Wyandotte
(If hen/laying pullet)Color of Eggs- Extra Large Brown Eggs
LOoks- Golden Laced Wyandotte, Profile pic, AMber eyes, Yellowish legs, rose comb
Personality- Spicey, Sweet, Sassy, Feisty, sensitive
Part of Government?- No, too young (Must be at least a hen/rooster, can't be a Pullet or Cockerel)
What did you do when humans were around- Kept as a laying hen at a small human nest, with friend Bubblegum.
Extra- Friends with Nipper and Bubblegum

Name- Nipper
Age- 5 years
Gender- Laying Hen
Breed- SIlkie
(If hen)Color of Eggs- WHitish/brownish
LOoks- Splash SIlkie, AMber mixed with green eys, EXTREMELY FLUFFY!!! Even for a Silkie
Personality- Rude at first, but when you get to know hjer shes really sweet and cuddly
Part of Government?- Yes, she is Vice President (Why not?)
What did you do when humans were around- House Pet
Extra- Bubblegum and SEphora are her friends 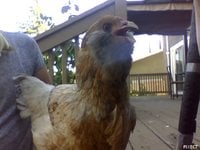 Personality- Sweet, Shy, Cuddly, Cute, Submisive
Part of Government?- No
What did you do when humans were around- Kept with Sephora
Extra- Best FRiends with Sephora and Nipper.

Name- Fluffles
Age- older than the moon and as young as a newly hatched chick.
Gender- hen
Breed- silver Sebright
(If hen)Color of Eggs- no egg. She is too stressed for egg.
LOoks- elvish beauty
Personality- no.
Part of Government?- secretary of treasury
What did you do when humans were around- pecked stuff.
Extra- Yes. Very.

This just reminded me of an English paper I wrote a month or so ago...we were supposed to make up a Greek tragedy and write up a scene from our play.
Mine was about a rooster who tries to attack his farmer and ends up in freezer camp

*Nipper*
"Hey Fluffels, would you rather have free Mealworms, Free Tomatoes, or Free Corn?" I asked her. "I have a BAWK! Excuse me! I have an Egg Laying Meeting at 4:00 and need help deciding. I also have a Cluck, Cluck, Cluck, Peck 'n Scratch class to teach at 3:00 sharp."

Sephora day said:
*Nipper*
"Hey Fluffels, would you rather have free Mealworms, Free Tomatoes, or Free Corn?" I asked her. "I have a BAWK! Excuse me! I have an Egg Laying Meeting at 4:00 and need help deciding. I also have a Cluck, Cluck, Cluck, Peck 'n Scratch class to teach at 3:00 sharp."
Click to expand...

Fluffles growled unhappily. "Mealworms, of course. More protien is vastly more important than squishy tomatoes or useless corn." She clucked under her breath as they paced down the secret corridor of the coop and into an oval office. "Hush now, here comes the Vice President. And for pete's sake, control your animal speak."
Share:
Reddit Pinterest Tumblr WhatsApp Email Share Link