What kind of roo is this?

I think he is a buff Orpington but wanted to check... my son won him at a easter party and he was one of those colored chicks. He use to be all orange. My 2 yr old named him Tractor and he is a very sweet roo. 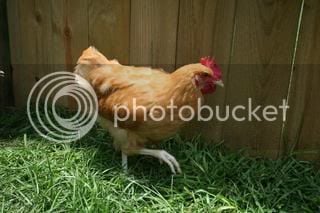 looks like a Buff Orpington to me. White legs and looks just like my girls except the comb and wattles are bigger. How old is he?

I think your exactly right BO Roo and he looks like he would be a sweetie.

Oh he truely is! He has even become a "mommy" to our little sebright, if he is away from her she sqawks (non-stop) until she finds him or he finds her. Its pretty funny! And even though he is young and gets bullied A LOT... no one had better mess with his little girl or he will go after them, even if it means he gets hurt.

Ive taken up guard duty in the back yard, just to keep him safe.

Awe that is so sweet! What a good boy! I have a light brahma Roo that was kinda scrawning when he was little so of course he got alot of extra love and attention from me Cause the other boys always beat him up. But I guess the all the extra attention gave him alot of confidence because today though he is not the biggest, he is the best sooooo sweet to any people but you let one of the other roos step on his toes so to speak or mess with the his girls he'll put em their place but quick.......You don't mess with King Honeycomb {I couldn't help myself) LOL. Anyway your boy might be small now but sounds like hes got the makings for a great Rooster! Good luck with Truck! Great name too! Sandy

Thanks Sandy! Thats very encouraging! How many other boys do you have and how well do they get along? We are trying to decide if we need to get rid of a few roos... (Im pretty sure we do) we have 9 chickens all together 5 of which are roo's. We are so attached to all of them but ive been told before to long they will be fighting and hurting the girls and possibly go after my toddler. Just thought I would see what you think? We only have an acre and they all free range.

Hi there! Im by no means an expert on the subject but I can tell you about my personal experience if that helps? But I have alot of roos most of them Im not going to keep but Honeycomb and another Salmon Faverolle Roo named Oliver. But of the 5 Light Brahma roos I don't have a single mean one amongst them yet, They all get along pretty well, they have tiffs of course but they are settled mostly by posturing but no bloodshed, Honey comb has kicked other roos off the girls and has yanked a couple combs and done some chasing, but that is just the normal roo thing, pecking order and all. I have a second Roo (light brahma) that is Honeycombs second in comand and he (bad boy) does give me the stink eye every now and again and I just walk in and pick him up and he just sits there, and then I will put him down and give him alittle chase just to remind him that I am the boss. LOL But none have been aggressive toward me or anybody. I also have some cuckoo Maran boys and they are not nice boys at all, they will scream at you and scatch you if you pick them up and even try and bite you, They will not be staying here long. My boys (human kids) are all grown. But the little girls from across the street come over all the time and are with the Light brahmas and weve had no problems, but my advice would be to watch there behavior very carefully especially when you little ones are around them cause you just never know. I don't think that there is any guarentee that they will or won't be aggressive in the future. but just keep reminding them that you are the boss. I do think that you have too many roos for the number of girls that you have I think that they will eventually harrass and hurt the girls. So i would pick the one maybe two even that would be pushing it for just 4 girls. I think the boys would be fine together if you didn't have the girls but it might cause some problems this way. Thats just my opinon though.
Just a side note( I think that Light Brahmas are Notoriously friendly birds too that could have something to do with the sweet natures too. so breeds do play a part).
Let me know how things are going with you and your chicks! Good luck Sandy
Oh heres a picture of my Honey comb its not the greatest but I just love bragging about him. LOL

The guy holding him is my eldest son Dustin. I think Honeycomb was 16 weeks in this picture.
Last edited: Jun 21, 2009

Buff Orph. And he isn't being a "Mommy" so much as being a "Gentleman". A good Roo protects his ladies!