What Rabbits Do You Have? Show Off Your Rabbits Here!

Hoping some people can help me out here. I've had rabbits for about 8 years and never had mites until this year. Back in the fall one of my rabbits got a case of the Cheyletiella (non burrowing) fur mites. I didn't take him to a vet because I could tell from the dead skin and fur loss it was that mite, so I treated him with Ivomec and cleaned out his hutch and he's been clear for months. Now just this week I've found that a different one of my rabbits has the mites again. Im treating the same as before but what I want to know is where these mites are coming from? I don't have dogs or cats and my rabbits don't really leave my property or play around the yard too much. I used to show them years ago and never had this issue. It's frustrating me thinking about how they might keep showing up. I read something saying rabbits with poor immune systems are more vulnerable but I don't see what an immune system has to do with mites? My rabbits are old (almost 9 and 7 years old), but still. I'm away at school for most of the year and my mother takes care of my rabbits while I'm gone, but she's not a fan of giving medication. In the fall I blamed it on contaminated straw, but my rabbits aren't using straw in the summer so I'm clueless as to why the mites are back.

Old Philosopher said:
Urgent question about fostering!!
I have 2 does kindling within 3 days of each other. The first one to kindle destroyed all her nesting material in her box and made a hair nest on the wire outside the box. I rebuilt the nest which she also destroyed. She kindled 2 days ago and had 5. Now she has even removed the last bit of hair from her cage and the kits are all over the place. One died at age 2 days. Another is a "runt" obviously not getting fed enough.
The second doe kindled last night. She has a classic nest and 5 happy kits.
I am tempted to foster the kits from the first doe to the 2nd doe, because their continued care from the 1st doe is highly questionable.
Am I jumping the gun? I hate to loose more of the infants due to neglect.
HELP!!
Click to expand...

UPDATE:
The fostering failed. The 2nd doe with 5 kits immediately segregated HER kits from the foster kits. All the fosterlings died. Of the second "happy kits", I lost 3 two days later. That leaves her with 2 kits. One of those has splay legs (all four limbs). I went back through my records and these two does were out of a previous doe that threw a play legged kit 2 years ago. Understanding it can be genetic, I now seem to have a polluted gene pool!
I'm going to give them one more breeding, but if I get more splay legs and abandonment issues, they are all going in the stew pot, and I'll stick with raising chickens. I took a 3 year break from raising rabbits...now I'm beginning to remember why. I was wrong about the 1st doe. She had 7, one dead within hours. So out of 12 kits from 2 does, 2 survived and one's crippled.

I have 3 Mini Rex does: 2 are Castor(Sunset & Mahogany) and the 3rd is a Broken Black(Coraline).
Sunset is the aunt and half-sister of Mahogany. Rabbit pedigrees and relationships can be so strange.

Coraline gave birth last night to a litter of 4(REW, Broken, 2 Solids?) so far might have more coming. This is her 4 or 5 litter and all the rest have been very successful.

I have to many rabbits to count!
I mostly raise Meat and feeder rabbits, but I think it be fun to get into show and I have two pets one of them also being a fiberstock.

I'll try to get pictures at another time but my list goes as follows.

Rudy Cuty - He's a red New Zeland, he's surprisingly not that big but he's kind of bulky. The guy told me he was a read but he looks more like a cinnamon to me with a darker face. He's a shy guy and dosn't like being touched but he loves to come up to the front of the cage when you walk by making it look like he dose. He's been a very good buck I love him to pieces.

Nutmeg - She's a large New Zeland Charli, she's a scardy rabbit sweet and an okay mamma, I had another rabbit i got with her who was an excellent mother but unfortunately a heat wave took her from me.

Hot tot - She's an Angora New Zeland mix I got from a friend, she's a sweety with a strang habbit of attacking the hand full of straw that I toss into her cage. She's got this strange habbit of changing fur colors subtly. She's black and white but She's been changing more and more to have more brown in the mix.

French fry - Is a Flemish Giant I got from some freinds she's and excellent mother as well.

Coco - is the other Flemish Giant i got from the same freinds, she'd a good mother but she's a grumpy stubborn girl.

Sugar Pea - Is the daughter of the other rabbit I lost, I don't know much about her since she's still new but My avatar is a pictuer of her.

Nevin - he's a rescue rabbit and unfortunately there's not a lot of information about him because of that, he's either a caly or a NZ. But he's a sweet boy even if he's really messy.

Cookie - a little chocolate dutch I got for my grandma since she wanted a bunny to hold, she lives with me now and she was a really good mother, I think she really wants to have another litter but I don't have a dutch to breed her with...

And finely Sprigg - He's a lionhead mix (Pretty sure its with an Angora but I could be wrong) we adopted from our local humane society, he's shy and wasn't handled a lot apparently so we are working on that.

That's all of them so far, I don't think i'm missing anyone.

(This is the same rabbit in all of the pictures, just different lighting & places) her name.... is Bunny. 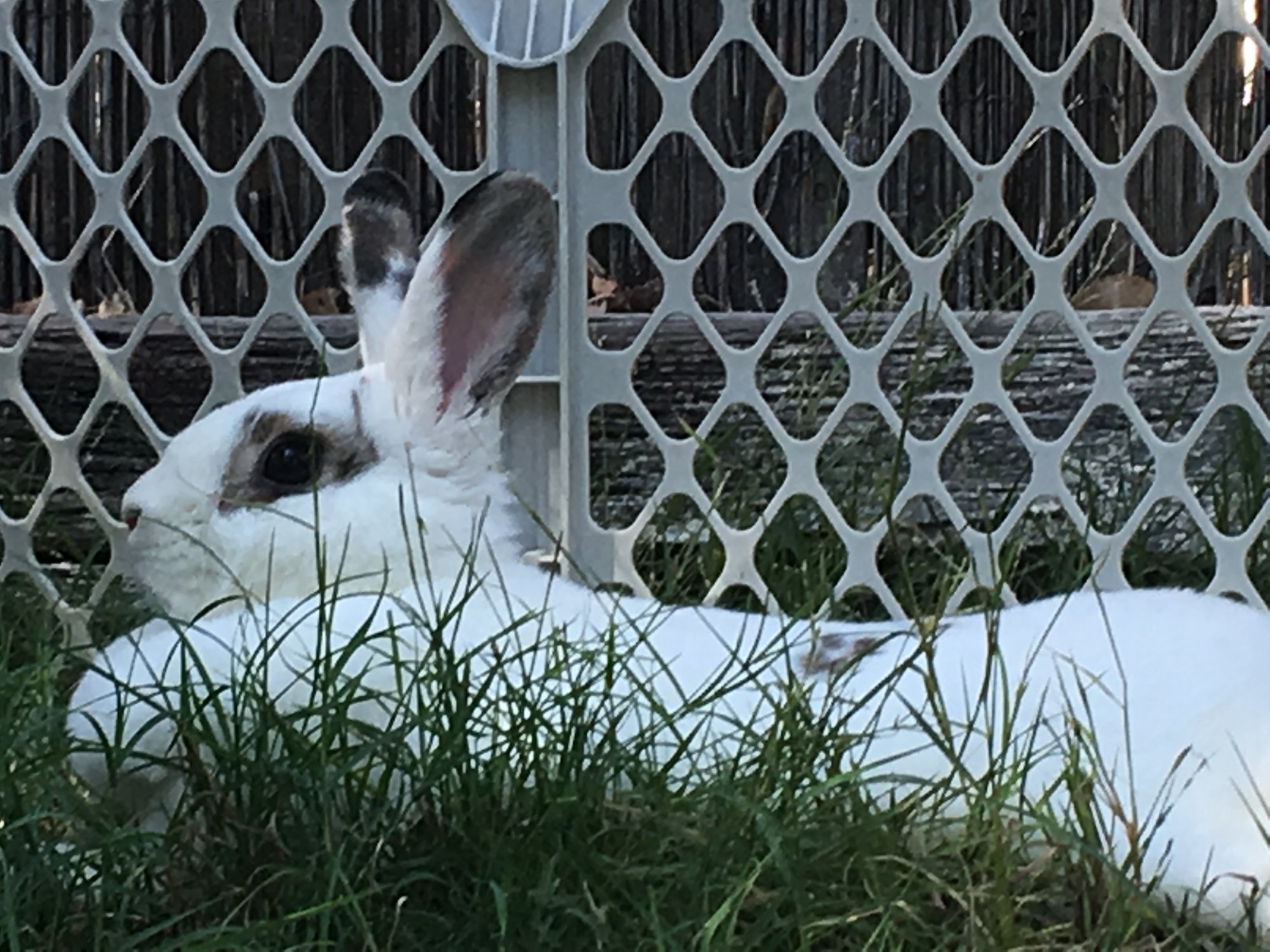 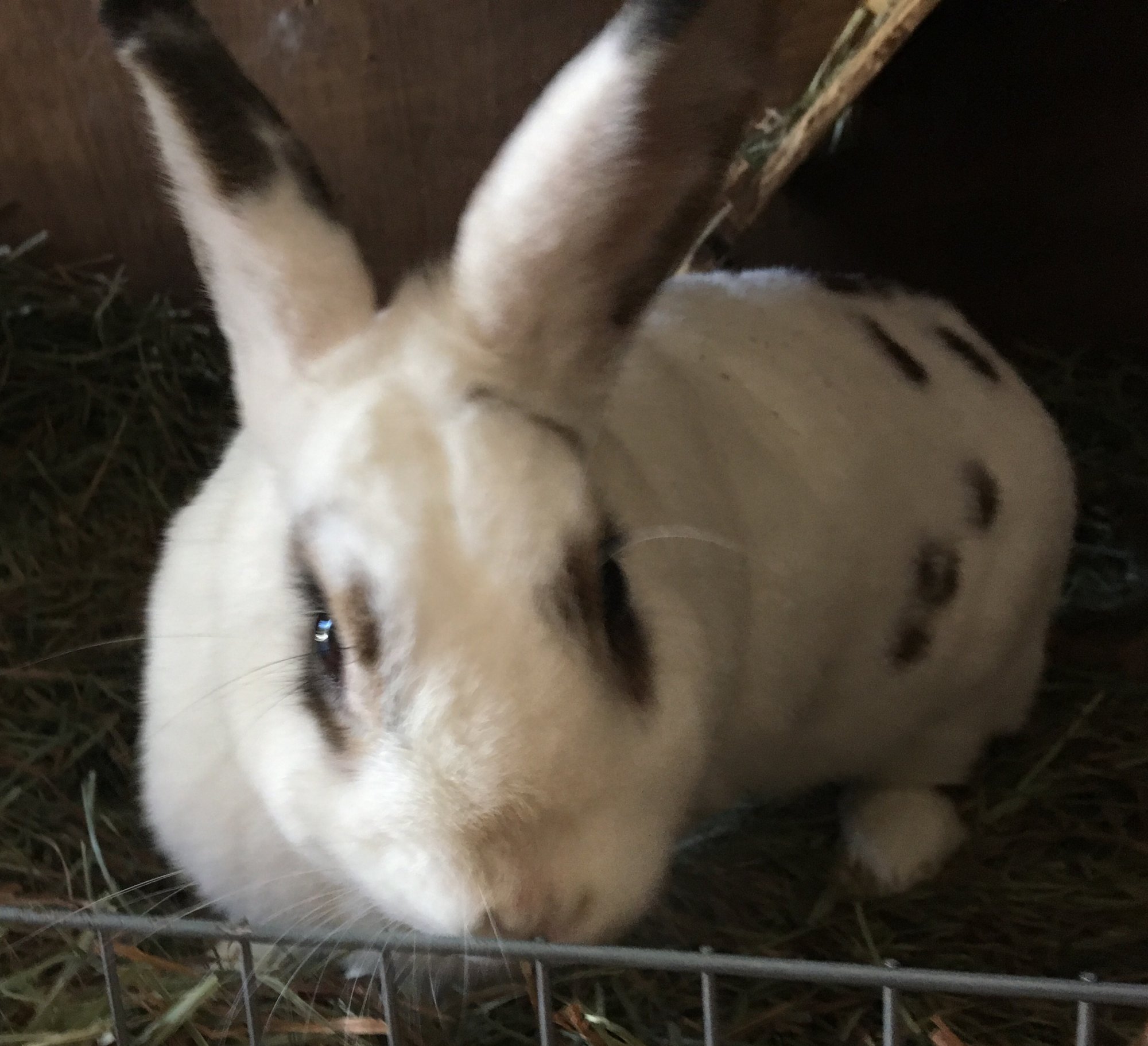 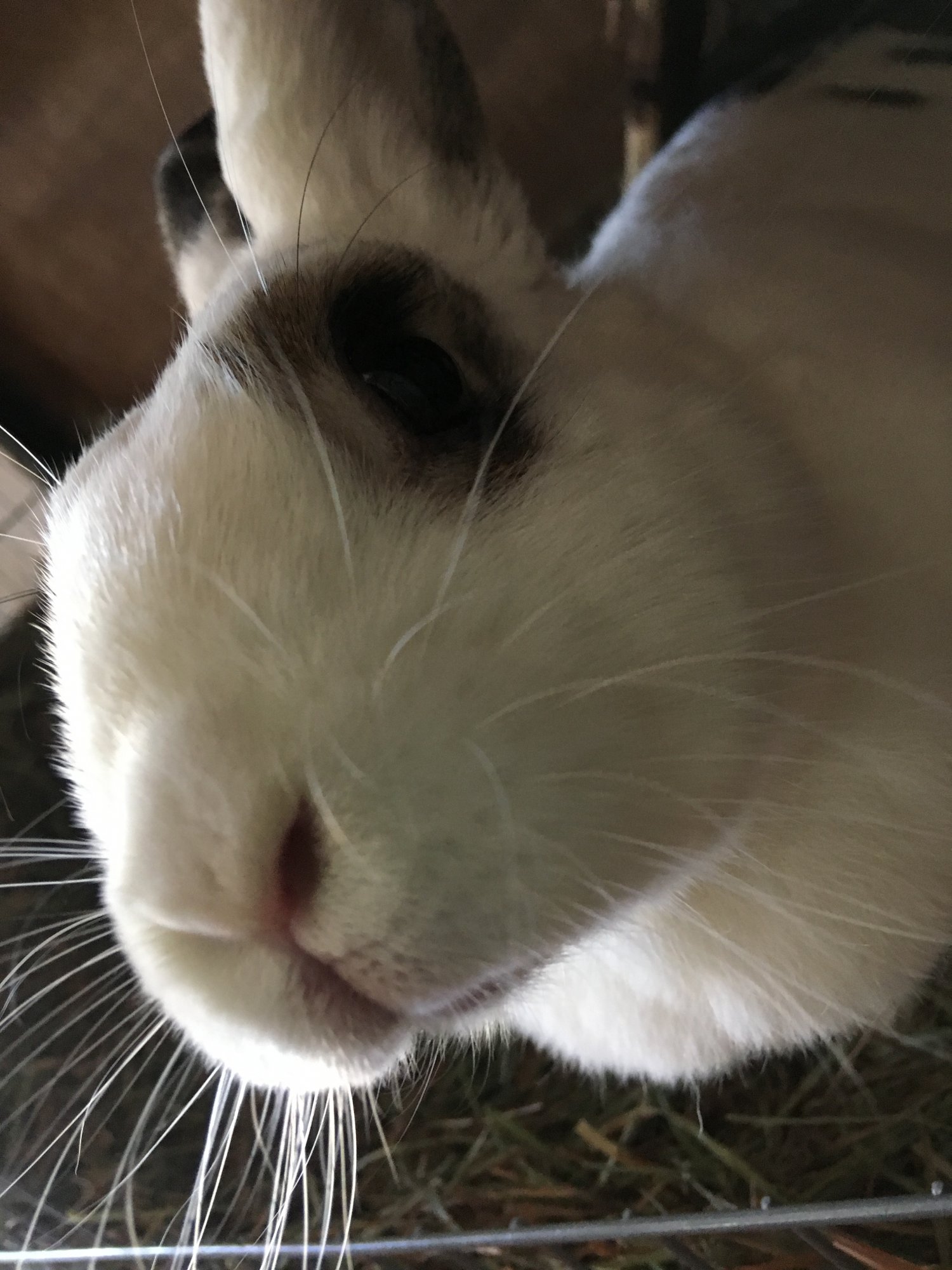 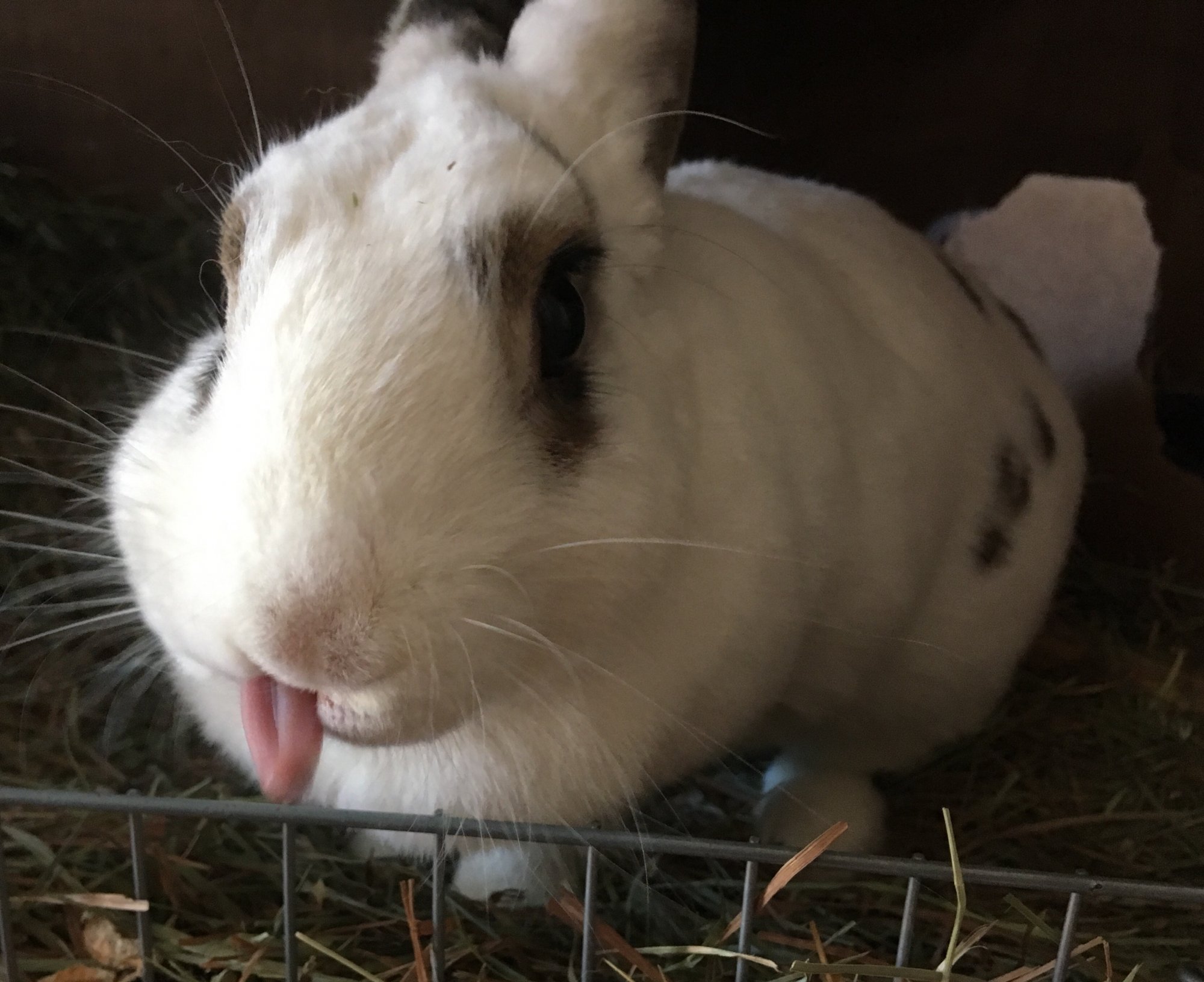 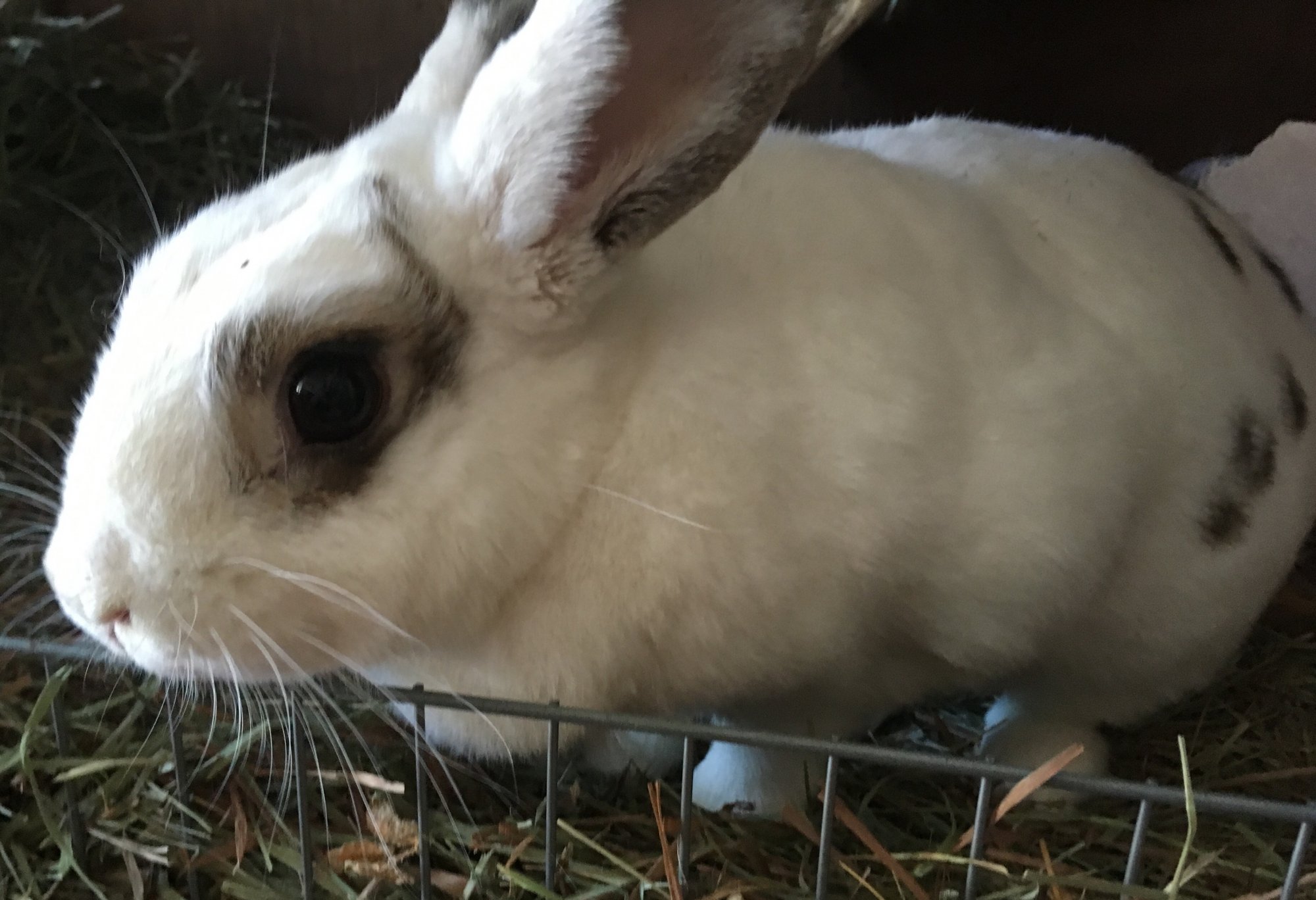 We're down to only eight rabbits at the moment.

It's supposed to be five or six, but we're testing genetics. They're all New Zealand, raising them for meat/4H sales/pets/any other reason someone wants to buy one. I'm interested in showing, but I'm not sure if I'll ever be willing to make time for it. Officially they're livestock, but to an extent they double as pets.

Penny is our herd matriarch, a beautiful blue (that's actually steel based) and a good momma. All of our other rabbits trace back to her. She sure loves her greens!

Pepper is red-eyed white (my daughter's favorite color, NOT mine). Pretty friendly, and raised 11 bunnies her first litter!

Lily and Ellis Mae are both young blue does (steel based again... sigh). I've been bribing them with greens to work on posing them in their cages. It's been working pretty well, but I know they'll be mad at me if I ever pick them up to put them on any kind of grooming table!

Junior is a gold tipped steel, with a light amount of steeling. Not the prettiest color we have, but he carries practically every color in his genetics, so he's produced some adorable litters. Watch your fingers when you offer him greens!

Silver is a blue steel buck. He tries his best to ignore me. I love the blue color, but he definitely qualifies as livestock, not pet.

Cinnamon and Crimson are brothers, both red. We're going to breed them next month, decide which one will be better to keep, and sell the other one. I'm trying to pose them in their cages, too, and I've been pretty pleased with their progress.

Of course, the most fun part of raising rabbits is the babies! We don't have any right now, but we've had as many as 17 cuties at once. They're so adorable!

I only have one lil guy at moment...He's an elderly Dutch dwarf. Used to keep Rex rabbits and want to get a Flemish Giant in the near future, but feel it's best to wait til Spring.

Mini vent/rant about girlfriend and rabbits
2 3

K
Convincing My Dad to Let Me Breed My Bun
2

Any horse people here? Have some questions
2