What to do with a mean tom that I plan to use for breeding?

I bought a pair of turkeys a couple weeks ago along with a male peacock. I've had a mean turkey and peacock before. With the mean bourbon red tom my husband went out , chased after it, and accidently killed him. We had turkey dinner that night. This time I want to keep the turkey alive cause I want to use it to breed the hen. The hen is a bronze and the tom is a wild turkey. They are both 3 years old. The guy we bought them from said she was a good mother and that the tom had been attacking the large snow plows going by but has only attack his son once. He wanted to get rid of them cause he was going to be getting some emus. I decided to buy them since he was only asking $50 for both and it would be a nice change instead of buying chicks and getting to watch the hen hatch them without me having to go through the incubation process. We will probably buy some white hens also. Had some before that we raised that were very friendly and tastey. We tried the blue slate and the bourbon but they didn't have much meat on them for the size of them. The bourbon was suppose to of been a hen but he was younger and acted like a hen till one day he managed to get out of his pen away from the other male then he decided he could strut since the larger male couldn't attack him. My FIL when into the pen today since I couldn't get past the door since his head was stuck in the crack when I tried to open it. He poured some feed out and then turned his back on the turkey on purpose and when the turkey tried to attack he gave a back kick a couple times to startle the turkey and then pened him in a corner and grabbed him. The turkey didn't try to attack him the rest of the time we were in there. That is one thing when you're a large guy doing that but with me being only 110lbs and small framed I don't think it would scare the turkey and I probably couldn't grab onto him.

You can take him on at 110lbs! He is only about 30lbs and if he comes at you, just grab him by the neck and straddle hin and pen him to the ground. Just make you neighbors are not watching! lol

Luckily the closest neighbors are a long ways off. I have seen someone on Animal Planet that was working at a zoo and she had to do the same to a large mean swan. Maybe I'll wear some gloves just incase of spurs. I guess it would be easy to grab him his neck if he is near the door to reach in and grab him. Anyone happen to have any videos of them doing this?
Last edited: Mar 10, 2011

I'm having a bit of a problem with my 2 yr old tom. Actually, I'm not having a problem. The problem is, visitors that are coming over or my daughter going outside. The tom sees my daughter and runs to the deck just waiting for her. We did the pick up thing and it did work for a while. She also chased him as if to pick him up and that worked for a while. Now he is back at it.

I'm trying an experiment. Knowing the pick up trick, the chase the turkey trick doesn't work for long. So, I decided to have my daughters boyfriend feed the turkey some bread. My thought is......... since I don't have a problem with him he doesn't attack his food source. Mine free range and are not in a pen. Well, I'll be darned if that didn't work. My tom no longer was interested n attacking my daughters boyfriend. Now I have to see if it will work with her. The boyfriend was feeding the chickens and the turkey so I guess the turkey thought he was one of the good guys. We'll see (both my daughter and turkey).

Aggressive toms (or roosters) should not be bred in my opinion.

I get rid of aggressive toms as soon as I can get a replacement tom. There is a line between friendly and aggressive that they are allowed to cross once then it's bye bye birdie.

solution for mean birds as follows : Machete+stump+bird = dinner. My flock gets 2 warnings, first is a pin down session, second is a swift punt, and third is my crock pot.

I haven't tried the take down yet. He doesn't seem as aggressive as the bourbon red I had. I wasn't sure if the turkey was attacking me due to him being pinned up now cause the guy had him free ranged. Maybe he feels cornered whenever I go into the area he is in or knows the exit is behind me. We are wanting poults to eat so the poults might not get to the aggressive stage before eating. The hen is so large that I'm not sure why type to replace him with. I don't want her crushed. She hasn't warmed up to me yet but reminds me of an old white turkey hen I had that I loved. We gave her to some Amish since we didn't want to raise through the winter and they didn't have a turkey for Thanksgiving. I knew they would use every bite of her especially with 8 kids to feed. For some reason I love the smell of turkey poults. I had chickens first and then my FIL wanted some white turkeys and I couldn't get enough of the smell of them. They had a different smell than the chicks. Maybe I'm just nuts. The last large white tom we had would take his bath on my hand as a poult and then still try to when he was full grown. Only was about to get one foot on my hand then.
Here is a picture of him when he was taking a bath as a poult. 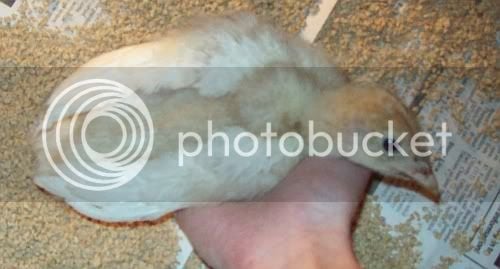 if you have the large, broad breasted white variety, you might as well eat them both, as they get so big they cannot reproduce naturally.

Wild toms need to be aggressive, but, in captivity you do not want to breed those wild aggressive traits back into your domesticated flock. You will have to deal with aggressiveness in the offspring as well. You'll have more than one aggressive problem on your hands down the road. Better to be patient and wait till you can find an appropriate tom to use.

G
Peafowl and turkeys together

Is it possible to breed a Heritage tom to a Broad Breasted hen, successfully?