Breeding?!?! My chinese geese will be 4 months old at the end of June and they are already breeding! The ganders are breeding the geese and the geese are very interested in making nests and setting on the ducks nests but no goose eggs yet. It still has me very confused though as to why 4 month old geese are showing breeding behavior! Any ideas??
Last edited: Jun 12, 2010

Don't know whats up with the geese..
but one of mine laid an egg yesterday at 4.5 months and the males are not intrested in the goose yet,

i am ok with that,

I read where it would be a year to a year an a half before they would start to lay ,mabe we have "special geese"

Do you have chinese geese, i think we have posted on the same thread before.

I'm okay with it too! We must have special geese! And yes, I posted about my chinese geese on your thread!

Where did you get yours from?

My chinese started laying in March from an August hatch date. I didn't expect them to lay this year at all.. I think some geese (chinese) sexually mature very quickly, but usually when they mature, it's out of season for laying, so it seems as if it's delayed. Chinese are probably pretty much sexually matured by 4-5 months (males possibly shooting blanks, females possibly laying weaker eggs), but usually they are hatched later in the season when the goose goes broody. By having early bird goslings, you guys got early bird layers.

Chinese are known to keep going with their season until very late, sometimes setting in the fall.

I love my chinese, but I don't have a male chinese, so my opinion isn't tainted by gander behavior. Mine aren't super friendly, but they're fun to watch and they definitely have personality. BIG personality..

Quote:
I got them from idea, i ended up with 3 pair of chinese, one extra chinese gander and 3 tufted romans one of which is in love with all my extra roosters i have pened up so i am thinking it's a girl and i don't know if the other 2 are girls or boys

They follow me everytime they see me, even on the 4-wheeler and tractor if i don't go to fast, they are love buckets,sweet as can be, well till next year anyway 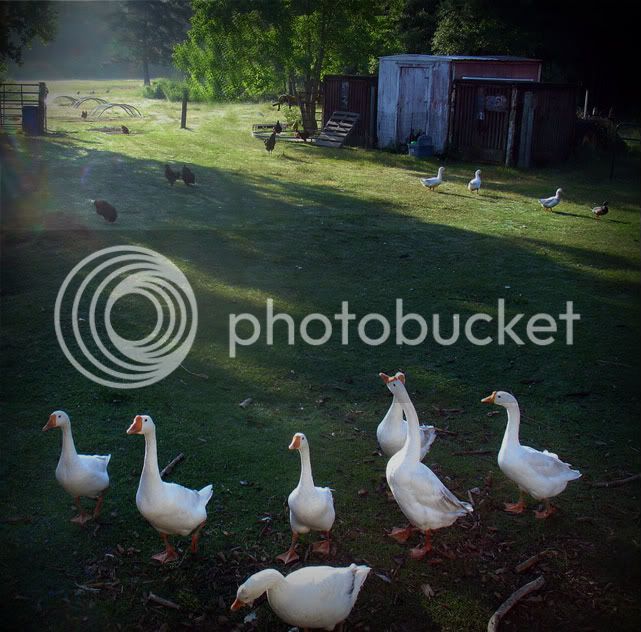 That is a great picture, looks fake it's so pretty! jennifer

My Geese are nuts help

Is it normal that my Chinese Geese only lays eggs 2 times a year?

S
Is it a good idea to get goslings for our bonded pair of female geese.

I Think My Geese Were Breeding...
2