Why isn't there more chatter about Ohio brooders?

AKA hover brooders. I stumbled across mention of it in a different thread that was a few years old, followed the link, and decided to give it a try. This thing is, for me, 100x better than brooding chicks in my basement.

We don't have a garage, so that's not an option for me to have chicks OUT of the house. I have brooded chicks in a kiddie pool with improvised walls. In a plastic dog crate. And in a galvanized industrial brooder (that we got with a bunch of incubating stuff after they had storage unit auctions, and someone craigslist-ed all the chicken stuff they accidentally bought.) The result is always the same: chick dust all over EVERYTHING in my basement, and after about 3 weeks I have to clean the brooder daily or my whole house smells like chick poo. I don't usually get 5 or 10 chicks at a time, for which MHP would be a great option. NOPE. When I get chicks, it's severe chicken math, and it's more like 30+ at a time. What I DO have is an extra small grow-out/breeder/isolation section in my main coop shed. It's 3ft x 8ft, and the exterior walls are insulated because Northern Michigan gets cold, and where I live it's always windy.

Knowing my collector's ways, I didn't have DH build our brooder the standard 2x2 size, I had him build it 2x3. This used one half-sheet of plywood plus 2ft of some scrap 1x4 we had after I goofed on the cut-pattern and we had to connect 2 short pieces, and I used old porch ballusters that we had laying around for the legs. This size gives me 6in of clearance on each side of the brooder so chicks can't pile up in a corner and get trapped, and I kept it about 6-8in off the back wall for the same reason. We used metal boxes, porcelain fixtures, and regular incandesant 100watt bulbs. DH is an electrician, so he decided to use scrap metal-clad wire for the wiring connecting the 2 bulbs, but if you just did 2 separate cords/plugs you wouldn't need to do this as there wouldn't really be any wiring in the "chick area."

I turned the brooder on for about 3 hours before adding chicks. I put a remote thermometer sensor under it and it was reading right around 90 degrees. At the time our daytime temps were in the upper 20s and nighttime lows were in the teens. During the 2nd week, it was 8 degrees one night (which was about 12 degrees colder than the forecast). I put a combination of 34 1-week-old and 3-week-old chicks in. We are starting week 3 of them being outside. I have had 0 losses. Yesterday I used 4 pavers to prop the brooder up a little higher because they are getting bigger and I'm wanting to wean them off the heat a bit more. All of the chicks are almost fully-feathered, although their heads are still pretty down-y still. Adding pics to the 2nd post since they're all on my phone. 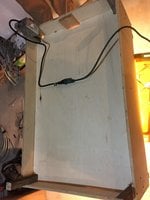 completed build in the basement 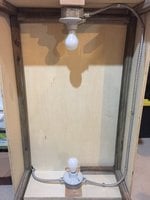 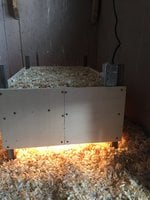 warming up in the coop, i kept 1qt waterers underneath in the corners and a reel feeder along the left edge under the hover for the first week 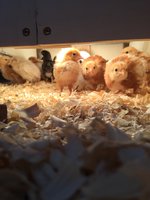 chicks right after putting them in 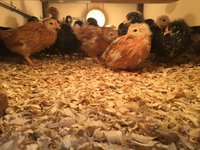 Looks nice! The only other Ohio Brooder I've seen was at a farm where they hatched and raised chicks to sell or grow out a few weeks to sell. They had rectangular wood brooders (maybe 2'x3') and about 18-24" high. They had a 4 sided metal shield that extended to within approx 2 or 3" of the brooder bottom. The 4 sides were the top (attached to brooder lid), and 3 vertical sides to provide the heat retention and draft protection. The light was attached at the top. The light and shield area was perhaps 12"x12" or slightly larger, but was not quite half of the brooder. The chicks could easily move to cooler areas out of the open side or possibly underneath the 3 sides. This farm loved it - they had tried other heating methods, but this one was the most efficient. Also, they could open the lid and the light and shield would come up with it, so they had full access to the chicks with just opening the lid. I think they are a nice option.

** btw, did you have to adjust the height of yours as the chicks grew? What wattage are your bulbs? **

For me, I purchased a heat plate and this has worked well for my chicks (17 chicks). However, I've used a heat lamp for the first few days so that I can more easily keep an eye on the chicks in their first days and it is easier to see movement (or lack of movement) etc with all chicks compared to one another and more quickly aid a chick that may be having problems. If I decide to hatch and/or brood more chicks, I may end up building an Ohio brooder similar in style to the farm I described.

Good luck with your chicks.

I believe the bulbs we are using are 100 watt (2 bulbs). I have raised it up on some paver blocks once, and most of the time when I check on them during the day they are not under ge brooder. On days above 20 degrees I’m turning it off all together.

I expect that it's because the majority of BYC folks are getting small groups of chicks. If I wer getting 30-50 at a time, I'd have different needs than the 4-6 that's normal for me.

And before anyone freaks out, 20C=68F

And I’m not talking about Celsius temperatures. It’ll probably be in the teens his week because Michigan can’t seem to figure out that it’s supposed to be spring.

I am also intrigued with the Ohio brooder. Have been for years.

BUT, I am hooked on MHP as a method for brooding chicks outside. Last season, I brooded 50 chicks with 2 Sunbeam XPress XL pads. The 2 pads together created approximately 24 x 24" foot print, with a 4" alley between the 2 pads.

If brooding more than 50 chicks, I would definitely be building an Ohio brooder. The biggest complaint I have about the OB is that it keeps them in a brightly lit area, especially at night. I wonder how well it would work with two of the ceramic emitters? I much prefer my chicks having natural day/night cycles.
S

This looks nice if it wasn’t for the glaring lights...
I am forever sold on ceramic heat emitters as a heat source. You have all the convenience of a heat lamp - since it provides a circle of warmth it is so easily adjustable to different numbers and ages of chicks, no on can get trapped, you can see all the chicks at a glance and it does not interfere with the day and night cycle. Plus it is incredibly easy to set up. Wouldn’t ever use anything else...

K
Moved my chick to a larger brooder.