Wintering in the barn?

Question: Have you ever tried wintering chickens in a barn? Are there downdides to doing do? We have a lot of extra space in our barn. I can imagine creating a large indoor run for winter. It is unheated, but it would allow the chickens plenty of room to mill about without worrying about snow, ice, and wind. Any thoughts? The barn has a concrete floor so some sort of bedding in the run would be necessary. Any recommendations?

My chickens mostly stay in the shed in winter with occasional trips outside to sit in the sun. Most of my pens have concrete floors. Shavings or hay work well in winter with the hay providing some forage if it's a mixed grass.

Yours should be fine with enough room.

to me its mostly about how much room they have, and a barn sounds pretty roomy. my coop is unheated and they never seem to mind. i usually throw some hay and a couple of pallets on the ground when its really cold so they arent always standing on really cold ground when not roosting

I think it would work fine, but I do think even with roomy space, it is good for birds to be out in the sunshine and fresh air. I don't lock mine in a set up, but let them choose to go in or out.

Only you know how much wind and snow is blowing in so definitely provide Roosts and straw so out of the cold.

I built my new coop in my unheated barn. I let my flock out every day to free range but leave the barn door open do they can come and go. I also have a concrete floor. I use the deep litter method with straw, shavings, then leaves, etc. They do great!

I do it now have done it a lot in the past. Some sort of dry vegetable matter in the form of a hay is good for many reasons and it needs to be kept dry. I also like to have so birds have about an hour or direct sun on cold days at least to sun themselves. You will see they go out of their way to sun themselves. I really like them to get the direct sun in the AM.

It sounds like you are planning on building a "run" inside the barn. Are you still planning on locking them in a coop at night for predator protection or will the run be so predator proof you can consider it a part of your coop? I don't know what your barn looks like but they tend to not be totally predator proof when shut. Don't relax too much on predators.

I don't know what else is in that barn. If they can get to it they will probably perch on it and poop on it. That could be equipment, hay, anything. So a run might be a good idea. Inside a dry barn there is a potential for them to create a lot of dust that will settle on everything in there. That's partly bits of feathers and skin that flake off but their scratching in the bedding will create dust as they shatter the bedding. Some of that dust is dried poop. With most stuff typically stored in a barn that is not a problem, but you might want to keep an eye out to see if you need to cover anything, like equipment.

In spite of what I just said I think it is a tremendously great idea. It gives them an area protected from weather which should really reduce potential for behavioral problems. In New Jersey you are going to see some weather days. My suggestion is that instead of trying to micromanage them, let them do the work. Every day, whatever the weather, have a pop door that you open to give them the option to go outside if they wish. Let them decide if they want to go outside or not.

When chickens wake up to a white world they generally are scared of the change. Mine tend to not go outside for a few days but eventually some get brave and go outside. How deep the snow is and how much forage is available has an effect. If the outside is a barren run they don't have that much reason to go out. I took these photos in Arkansas before I moved. In the first photo the 1" of snow fell during the day. The change was gradual enough they never bothered to be afraid and go in. 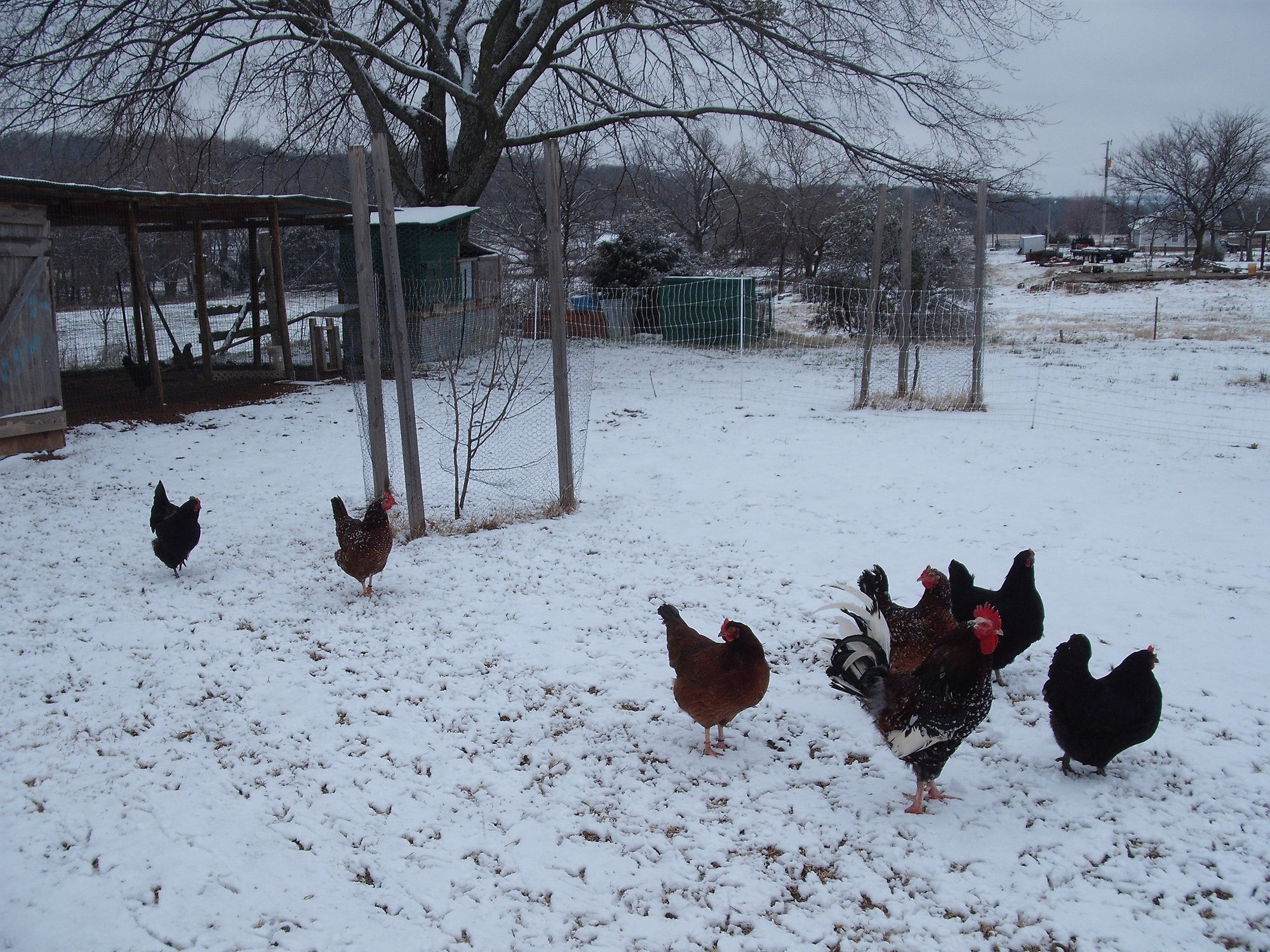 I took the second photo when it was 4 degrees above zero Fahrenheit. I opened the pop door and let them decide what to do. If a cold wind is hitting them they generally stay indoors. But if a cold breeze is not ruffling their feathers mine choose to go out. The cold obviously does not bother them. 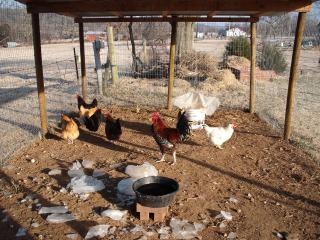 How wet is TOO wet