Would like to expand our run...what's the easiest way?

The title says it all

. We're doubling our flock (only half of those are going in this coop/run...the others are going into a banty coop/run) this spring and need ideas for expanding our run. I was thinking about making a two gate run or a secondary run I guess. The primary one would be what it is now (revamped...it's getting a roof and sand this summer), and the secondary run would be a simple fenced in area with netting to keep out hawks where they could graze and enjoy the meadow unsupervised. Our primary predators are hawks during the day and coyotes (as well as racoons probably, but I've never seen one) at night. They are locked up in the primary coop/run at night and when unsupervised. When I'm working in the coop or can sit around and watch them I let them out to wander the remainder of the property which they LOVE to do.

So what would be the easiest way to expand? How would I cover it? This would NOT be a completely predator proof run, only hawk proof, as the primary run is already built like fort knox. This would just be a place for them to roam that is covered so I don't have to worry about them all the time.

Here it is now: 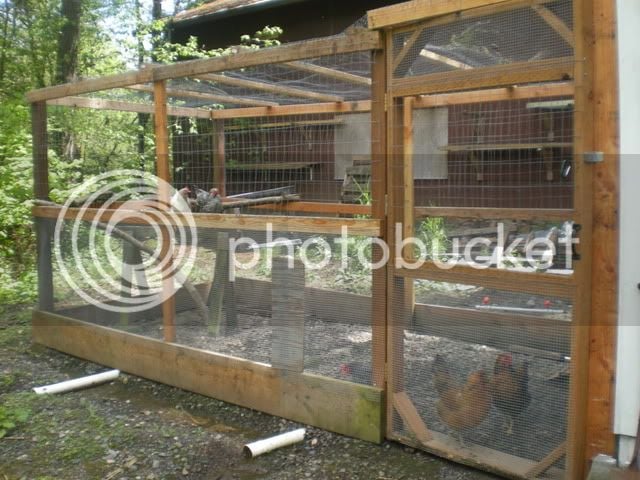 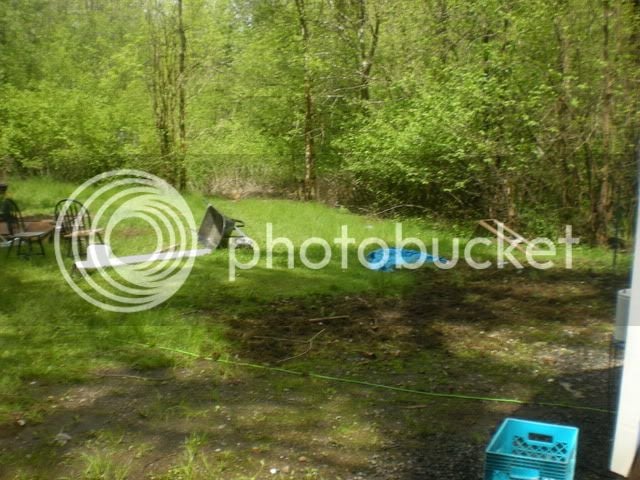 Where the future banty coop/run is going 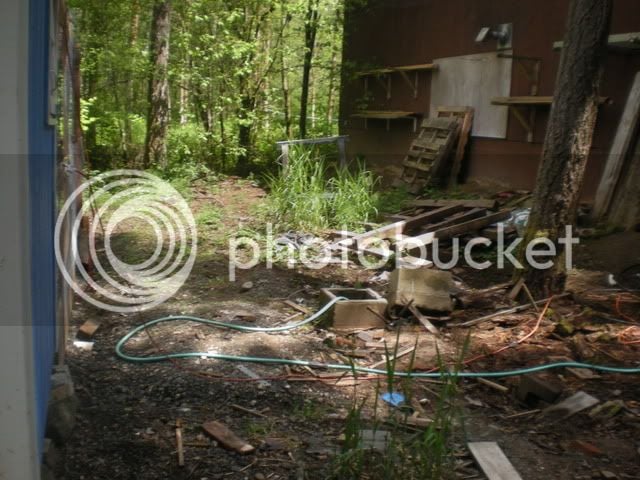 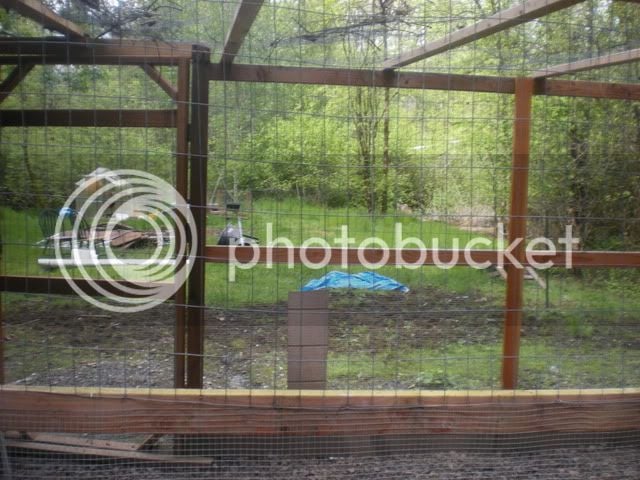 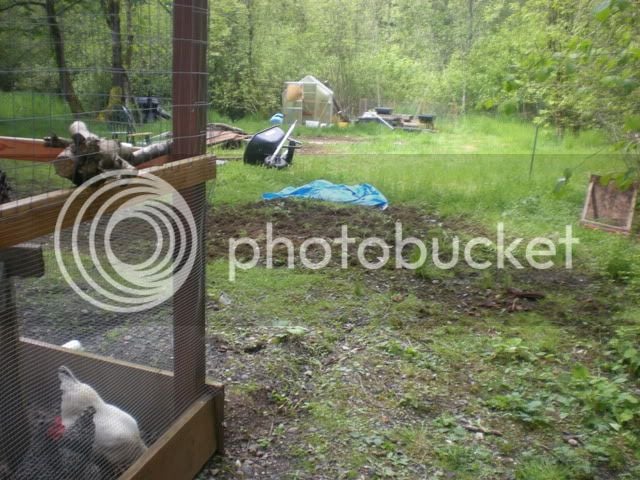 The pain in my rear end 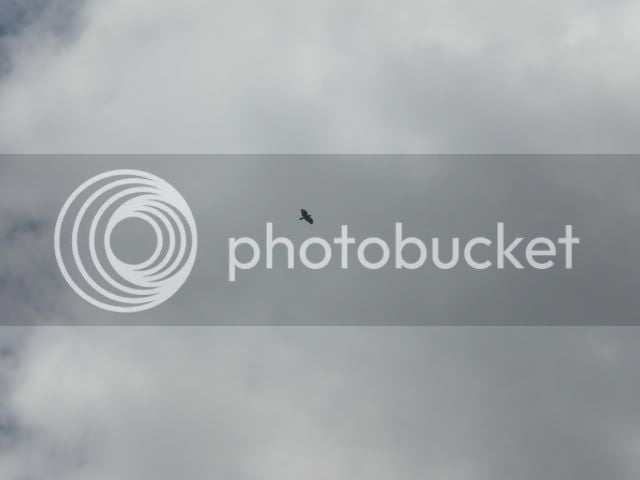 a very crude drawing of what I had in mind 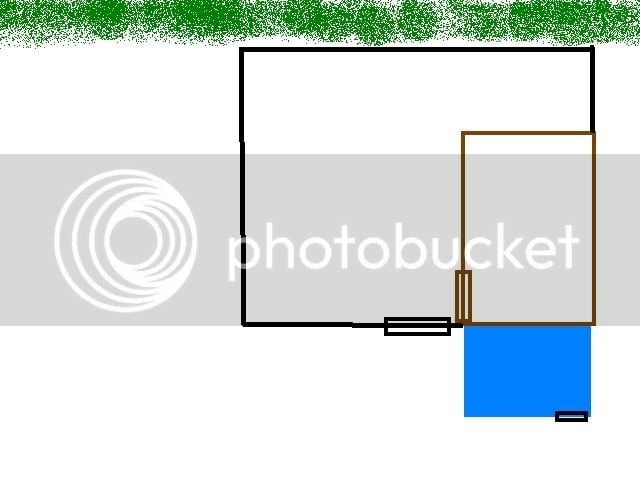 Your plan looks good. Is your current run 8 ft. wide? So that's a pretty large area that you're wanting to tack on...I can only tell you how I'd manage covering it. It looks to me like you're going to have to sink posts in "the middle" so that your netting has some support over that distance, even really lightweight netting like aviary or deer netting. My covered run is 16 ft. wide, and that's the way I went...w/supports at the 8 ft. points. Your area looks wider than mine...
Of course you could try running wire from your existing run supports to the new run supports...that might be enough to hold netting up

Quote:
Yes! I agree, I have supports in mine, I also added bird house

Quote:
Yes! I agree, I have supports in mine, I also added bird house

What kind of netting is that? I like it

. So far I think this would be the easiest way to go. How do you install the posts? Our run was secured with cement blocks buried in the ground. Is there an easier way to do it or is this the best way?

buckboy101: what are cattle panels and how would I add a door onto something like that?​
Last edited: May 30, 2011

We just used a post-hole digger to dig deep, narrow holes in the ground. We actually stuck some quickrete down in ours, but if it's just to support netting, I'm sure just tamping really well with dirt would work just fine - just make sure the holes are deep enough - at least 18 inches.

Just packing with dirt should hold the poles well enough. I grew up on a farm and learned to pack posts from my grandfather. His method was my bane but then some of those posts are still there and I helped put them in over 30 years ago and they've held in horses and cows and even held up the two story barn. First post holes were dug when the moon was full that insured you had enough dirt to repack the hole. I know goofy right but more often than not if I've dug a hole with the moon full I can refill it with the same dirt I took out but if the moon isn't full I almost always run short and that is the case in all soil types. After placing the post in the hole add just barely enough dirt back into the hole to keep the post barely steady. Start packing while holdint the post in place and pack till it won't pack no more. Add another shovel of dirt and continue packing. I used to think my grandfather (and my Dad) wanted to punish me for something with the packing. If I suggested it was good they'd say not yet. but when it was all done those post were sturdier than a 100 year old tree. Cement could not hold a candle to my grandfathers packing. He had a special packing post - a straight branch or small tree that I think was cut back in the dinosaur age cause it was so hard, it was the right size for for your hand in the middle and smooth as glass with just enough ridges for a good grip and the bottom was -from years of use- rounded and about 3 inches in diameter. For those occasional narrow spots you'd turn it over and use the top since it was a little smaller. The real trick is to add only a little dirt at a time between packings.

One more thing as you expand think of your door placement. We are in the process of finishing our coop/run area too. We have a fort Knox open air coop for night time with a 10x20 covered run surrounding it. But I also let them into the area under the blueberry bushes. The door to the run is positioned so that when it closes the run the I can go to the blueberries but the chickens cannot but when its opened chickens to goto the blueberries then it closes off access to the rest of the yard. In other words the openings are at 90 degrees to each other and the door is mounted in the corner so that it can actually close off either of the openings. Saves a bit on building another door.

Yeah I don't know what we're going to do about a door. Can we use 2x2s for a door frame? I'm assuming the fence frame should be made with 2x4s though.

That is a 16ft tall post that I burried 4 ft in the ground the broke cilinder blocks (the ones that have 2 squares) then we placed them in the hole then filled the rest of the hole with cement. I used a plain old shovel to dig the hole. As for the netting I bought off of eBay it is a 25'x25' netting.... Here is a link to the one I bought.
http://cgi.ebay.com/25x25-Net-Netti...903?pt=LH_DefaultDomain_0&hash=item5d2eede03f