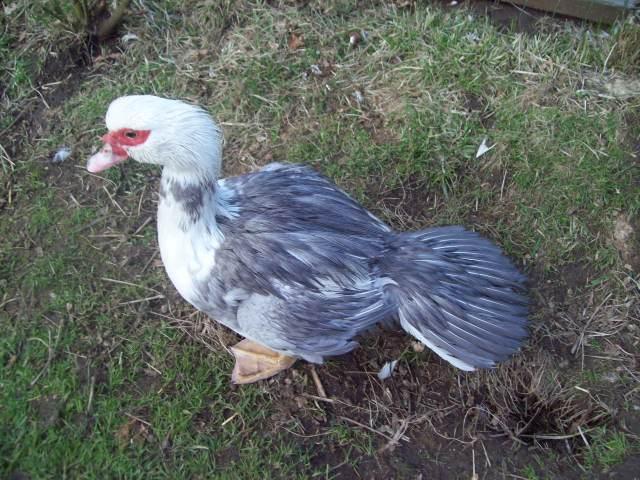 Below is a list of issues/problems that commonly occur with Muscovy Ducks & also tips on how to deal with or treat them.​
(I will add as new things come to mind or as i have to deal with them.) ​ ​
Wet Feather is a condition commonly characterized by "raggedy" or "torn-up"-looking feathers and also an inability to repel water. Wet Feather is one of the most common problems I have seen & experienced with Muscovy Ducks. It is easily fixable by providing the birds with plenty of clean water to bathe in and a clean, dry living area. Black Oil Sunflower Seeds(BOSS) are also a very good supplement to help restore oil production & make the feathers healthier & more waterproof. Wet Feather​
There are many things that can cause this condition:​ ​
Anemia (Iron Deficiency) Anemia is characterized by loss of color in the Caruncles(red mask around the face). If a Muscovy Ducks is anemic, it's caruncles will become pale & in extreme cases, orange in color. Muscovies that are not on proper diets or allowed to free range are most susceptible to this condition. This problem is easily corrected by allowing the bird(s) to free range, feeding greens & acceptable scraps as often as possible. Wet dog/cat food can also be given to birds suffering from anemia. I feed my own flock 2cups of dry dog food, as a treat, once a day to help prevent this issue.​

Foamy Eye Foamy Eye is just what it sounds like, excessive foaming in the ducks eye. This problem is more common in Drakes, probably due to them having more caruncling than hens, but there's no way to really be sure. It is most commonly caused by lack of bathing & injury to the eye but it can also be brought on by stress & sudden changes in the weather. It is more common in Winter because some ducks bathe less or have less access to bath water during that time. Foamy eye is usually easily fixed by providing clean bath water for the bird(s) & making sure they bathe well.

In some cases, Foamy Eye can be a sign of underlying Illness or Disease. If the bird is not having any other obvious problems such as wheezing, runny nose, coughing or being lethargic then there is probably no cause for concern.


Angel Wing Angel Wing is Very obvious in mature birds and is quite displeasing to see. Angel Wing is when the feathers at the ends of the wings grow up & outward instead of in the same direction as the other feathers, against the body. It can be caused by too much Protein or Genetics. It IS fixable if the affected bird is treated at a young age. It is not fixable after the bird is fully grown.​
Because I have never personally dealt with bad Angel Wing, I will suggest you search this website for information on how to correct it with bandaging. There are many very helpful threads on here with good instructions. Much thanks to the awesome BYC'ers!

Less Common Health Problems: Some things I have personally dealt with but are not so common with this breed of duck.​
Staphylococcus(Staph) Infections ​
Bumblefoot is a Staph infection in the sole/pads of a ducks feet(this also affects chickens & other poultry). It is commonly characterized by a round-ish dark scab on the sole of the foot and in more sever cases, a large lump or "bumble", as some people call it, underneath the scab. It is best to treat Bumblefoot as soon as possible and as safely as possible, because it is Staph and is quite contagious to humans as well. Bumblefoot is fairly easy to treat if caught early but it does require opening up the scab on the birds foot & removing the "core" or "kernel" inside, this is the root of the infection. People go about doing this procedure in different ways so for now, I will provide some links to helpful websites with info on how to treat it. Bumblefoot​
Staph Ear infection I have dealt with this problem in two of my juvenile Muscovies. It presented as a large, whitish-yellow plug in their ears. They had no other physical symptoms or problems besides the ears being plugged & a bit of squinting on the affected side. It did take me a while to figure out what the cause of this problem was, due to lack of info online, but eventually i figured it out and my birds are both back to good ear health again.​
To cure this problem I had to physically remove the visible hardened puss from the ear canals. For this, I used a pair of blunt, round-tipped tweezers so that it was easier for me to open the ear a bit and get a better look. After removing all the visible hard puss, I mixed 1TBSP Apple Cider Vinegar to 1/4Cup of water and used a plastic syringe to squirt the vinegar water into the ears to dissolve any softer or liquid puss I may have missed with the tweezers. The vinegar water also really helps to dry the area up and keeps new puss from forming so quickly.​
For antibiotics, I had to visit my Vet to pick up some Baytril(this can also be bought online). My drake weighed about 7lbs at the time so I gave him 1/2cc of Baytril orally 2x's a day for 5 days. My hen that was also affected weighted only about 3lbs and only got 1/4cc on the same schedule. I noticed really good improvement within the first couple days and when i checked their ears on the 5th day they were all clear.
​
Reactions: tjo804

This article answered some of my questions regarding my muscovy. The wet feathers and the orange on the carunicles. Not only did they describe the problem, they suggest a treatment.Very helpful.
Well written article
Read more…

While this is an old thread, is anyone there and can answer a question. Anyone know what would cause a Muscovy duckling (3-months), suddenly became so unstable on its feet that it flips over onto its back frequently, and has difficulty righting itself? Other than this weakness, it is lively enough and does eat and drink.
I am still needed some help too.. I posted ealier this year, around February, about a Very Cold Duck. I thought that maybe she was just suitable to the cold.. Scovy was doing fine until the Novemberish..then she became very cold. We thought that when the weather warmed up, she would be ok again..Scovy is still not acting or looking right.. She is still more lathargic and her beak and feet still look purple..I noticed very recently that she never developed the carunles on her face. She is and always has been small for a Muscovy. Over the last month, I have began to wonder if she has some type of deficiency or if she has some type of genetic or internal issue.

I am trying to figure out how to get more pictures posted, but there are pictures under Very Cold Duck..
helpful but this could have had a lot more diseases on it.
Good info. Thank you I am wondering about my hens feathers now.

Njinja said:
While this is an old thread, is anyone there and can answer a question. Anyone know what would cause a Muscovy duckling (3-months), suddenly became so unstable on its feet that it flips over onto its back frequently, and has difficulty righting itself? Other than this weakness, it is lively enough and does eat and drink.
Click to expand...

I would try feeding it Niacin or a bunch of green peas which are high in niacin!
I am reaching out for some help. I have a Muskovy hen that survived a dog attack. She had 4 puncture wounds that took stitches. And a broken wing. She is a true trooper though. She is a backyard pet and very friendly. The vet does not know alot about ducks; he did put her on antibiotics; but now all her feathers are falling out, and we let her in the salt water pool (her favorite) after 5 days, and she got totally water logged. I wrapped her in towels and she fell asleep on my lap. She has no oil covering. I failed to mention, she lost her mate in the attack. And we have not been able to merge he with the rest of the flock, bc all the other males immediately want to lay claim. So she has stayed separate, in the warm garage. Her carnacals are an orange color and flaky.

My concern is, the vet said to keep her out of water, cause of the stitches. I do not think that is right. I feel that the antibiotics may be causing her feathers to fall out? so....questions for all those out there:
1. Are ducks as naturally hearty as they say?
2. how long can they go without dipping their whole body in water?
3. Do they actually need antibiotics?
She is very healthy otherwise and has a true will to live. I just really want to put her in the yard, but I am fearful of the contaminates?
I need some help. My 7 month old Muscovy duck has no use of his right foot. I went out to feed and water on Tuesday, All was fine! The next day I went out to feed and he would not get up. I brought him in from the coop, gave him a bath. Blow dried him. He has been drinking but was off his poultry food for a day. But he would eat peas ( gave him 1/2 cup). He loves romaine lettuce and he would not even eat that. He started eating his food the next day. But he has bright green diarrhea. While in the tub, I work his foot, but it stays all tight together, sometimes goes backwards. He can use his other foot. But in the last couple of days he won’t even try to stand up. I am thinking he has a bacterial infection of some sort. I have given him some Baytril ( antibiotic that I had got from when his brother was sick. I am wondering if the use of his foot will come back. It has almost been a week.
Angel wing is NOT when the feathers at the ends of the wings grow up & outward instead of in the same direction as the other feathers, it is a malformation of the actual wing causing the wing to twist and point up and outward. If you have a bird with angel wing, you can those feathers to make the bird more comfortable.
You must log in or register to reply here.