Dawn On The Farms Bantam Barn 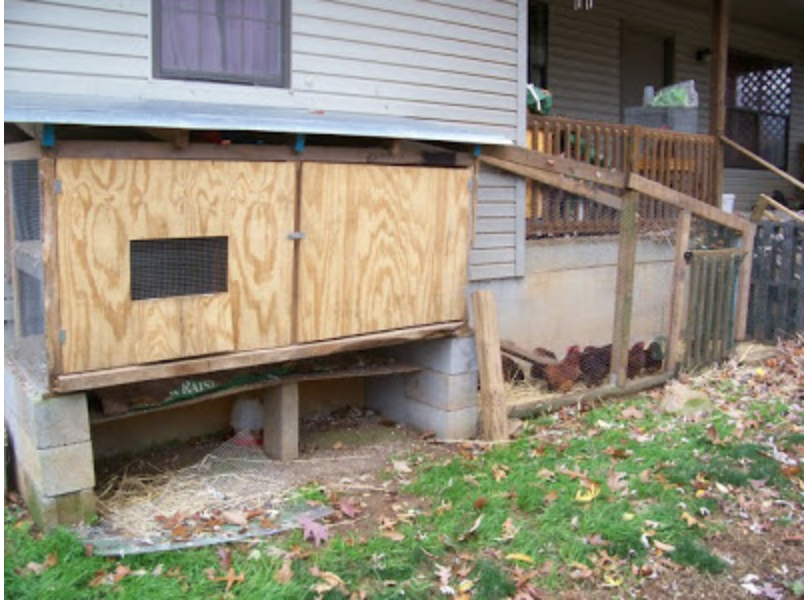 Dawn on the Farm's Bantam Barn​ 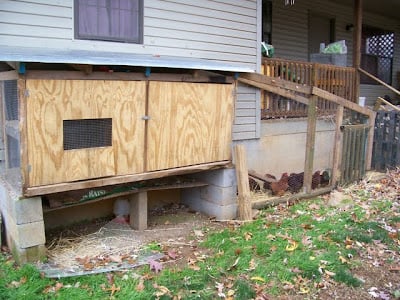 ​
The Bantam Barn got it's start as our Turkey brooder and was converted when my daughter got her bantam Cochins. It only held the turkeys for a short few weeks, so it made sense to use it as her permanent coop. It still needs a coat of red paint, and we'll get there, eventually I'm sure.
It sits right up against our house, and it's been a few months and I see no problems at all with it. We use a wire floor and a shelf below the floor catches the poop, well, most of it. We need to make the shelf as deep as the coop and will, we just used what was on hand to get the job done.
It has an attached run which follows along the houseline & stops at our front porch steps. They have their own little gate that leads out to the yard because we like to let our chickens out as much as possible, but we rotate pens & make them take turns to avoid any fighting or upset between the flocks. Here's how we did it... 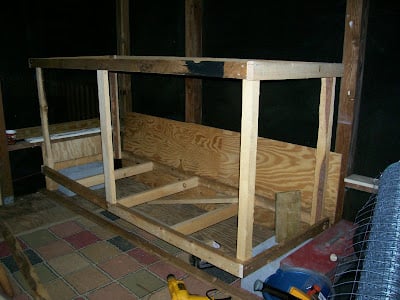 ​
The 7'X2.75' frame was created with scrap wood harvested at a semi-local backyard mill. An ad in Craigslist led us to scraps of all sizes, from the unuseable parts of the logs after they were cut into boards. After building a basic frame, I wrapped to top & sides with 1/2" hardware cloth and put down a hardware cloth floor. 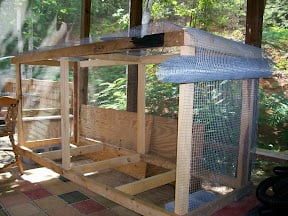 ​
Once we got it outside we used 2 metal corrugated roofing panels and built a rudimentary slope & basic roof frame. We don't expect this to hold any loads since it's mostly protected by the eves of our house. 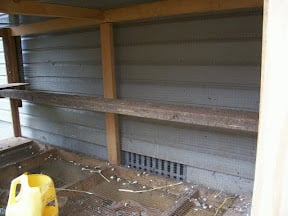 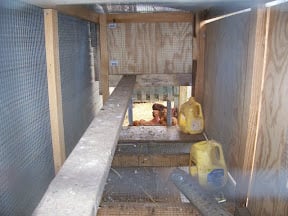 ​
Inside is basic and simple with one 2X4 perch running the entire length of the coop. There is no back wall, only the original wire, and the exterior wall of our house. We cut a door into the wire on one end where their run is attached.
We used 1/2" plywood without any framing for the doors. We're going to have to add framing to it because it's bending with time & humidity. 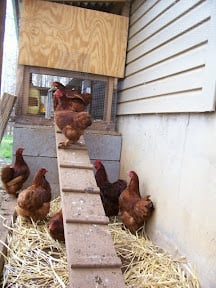 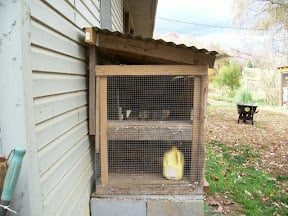 ​
The ramp makes it easier for them to get in and out of thier door, and the plywood keeps the wind off of them in their perch. The closed up end is where the nest boxes will go, two on the top level. A small platform was added to the end of the perch on this end so we can set a basket or two in there when they get ready to start laying.
The run was created from bits and pieces of leftovers from other projects, as we have had many. We made a shape that made sense to us and followed along so that the house's roofline partially protected their run, giving them someplace to go even when it rained. Of course we could throw a roof panel or two over their run, but I think it would look to bulky and it's really not necessary.
​ 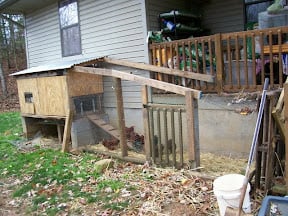 ​
The far end attaches right to our porch railing so very little was really needed to set this up. So far her Cochins are very happy... I think there are 8 pullets and 1 cockerel in here all living happily. In the winter we may consider putting some feed bags down on the floor and layering in woodchips and straw for extra warmth on their feet when they are eating, drinking or moving from outside to the perch. The front door also has a hinged window so they can see out at least on those days they decide to stay in.
I hope that we have inspired you on your quest to build your own chicken coop, or maybe to make changes to your own. Perhaps it was just interesting to see someone elses coops, I know I'm often surfing the BYC Coops, just to make sure I'm not missing something cool!​

a bigger run for them to roam in and a solid floor for theor feet to be on, cleaner water and foot system away from theor poop too.
This coop has a few flaws that male longterm housing less than ideal. The wire floor won't be good in winter. The plywood will degrade quickly in the elements.
Read more…