Article Gallery
I have been raising chickens and turkeys for a while, but I am still learning about waterfowl. I would like to share an experience I had with my goose.
About a year ago, someone gave me two Chinese White geese, a male and female. Sadly, before I had them a week, the female died.
The male was devastated. He seemed to mourn for loss of his girl. He would walk around the yard, honking and searching. I looked around in the area for another female, but no one had any for sale. I looked for goslings, but it was the wrong season and the nearest feed store was sold out of geese.
For about two months, my poor young gander mourned. He refused to hang out with my chickens and turkeys. He would spend most of his time moping around in his pond, alone.
He soon became quite mean. He would attack anyone or anything that entered his yard. I tried to tame him, even did some research, but nothing worked.
Then one day I stopped at the feed store to get some supplies, and couldn't help but look in the chick area. There where some bantams, a few sex links and some ducklings.
The ducklings just so happened to be clearanced off. I couldn't resist them. Soon, I was on my way home with several little balls of fluff in a box on my lap- I had decided to add a few ducks to my poultry collection.
There was one brown duck, and the rest were white. I took them home, and put them in the brooder. They loved it! They ran around, flapping their little stubby wings and quacking excitedly.
I soon felt head over heals in love with these chubby, fuzzy little ducks.
The first water they came in contact with they played with. I had to refill their water many times a day! Several of them didn't make it. I was soon left with three, two pekins and one mallard. They grew so fast! Time seemed to fly by. A few months later, they were ready to see the outside world.
I took them outside for the first time, excited to see what they thought. I had locked up all the animals, so they wouldn't get hurt. They weren't completely feathered, so I waited until it was warm. They looked surprised at the world they saw. They had soon explored the whole yard.
One found the pond. She paused, looking surprised at all the water. She soon was in it, playing and splashing. The other two soon joined her.
It was stirring to see three small ducks splashing around in the pond. I watched them play for about an hour before getting them out.
Gander was furious that I had allowed them in his pond without his permission. He honked and honked, pacing back and forth.
I began to let the little ducks out once every morning for a swim, then hurriedly locked them safely up in the barn. One morning, I let them out, then began to get their food.
When I came back, I realized that I had forgotten to lock up the goose. He had just come back from his march around the field, and was not happy. I thought he would injure the ducks.
But he didn't. When he saw them swimming, he seemed overjoyed! He didn't seem to know that they weren't geese.
He got in the pond with the little ducks, and shortly after, he took them under his wing. He became less aggressive and more tame. The ducks, who were all girls, would willingly follow him wherever he went.

Now, they can't bear to be separated, and Gander is fully convinced that these sweet little ducks are his. Every morning they march around the yard, Gander with his head held high and honking proudly, and the three ducks following. They eat together, swim together, and even roost together.
The ducks and Gander seem to understand each other. They are happy together, and Gander has forgotten about his lost mate. All is well in the barnyard.

(Here are a few pics of my goose, with his ducks.) 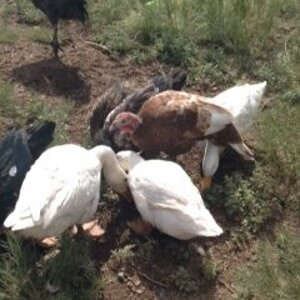 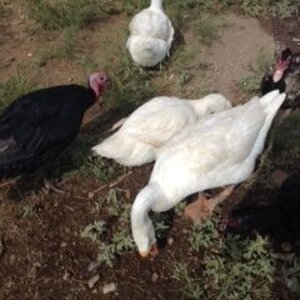 Reactions: IndyGail and kcan2
About author

-7-6-
I live on a small farm with lots of birds. Animals of all kinds fascinate me. I want to be an author. Thanks to anyone who reads my content!
Just to let you know, I really do want to hear your opinions on what I can do to improve my writing skills.
All advice is welcome!
Thanks so much,
M. H. Fielding.