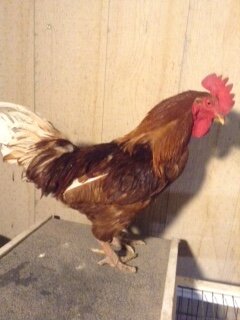 Here is the story of how I came to love poultry.
My flock started out with just a few hens (Or so I thought). We had a Buff Orpington, a Blue Orpington and several RIRs. At least we thought we had all RIRs. Shortly after getting them, I noticed that two of my Reds didn't look like the others. One was really small, and the other had white tail feathers. Her primary and secondary feathers on her wings were also white. She was always being picked on by the other hens, and never got enough to eat. Often, I had to separate her and give her extra food.
The moment I brought the chickens home, I fell in love with them. They were a happy, clucky bunch. They came when I called, and followed me around the yard. Then one day, one of the hens allowed me to set her up on my shoulder. That was when I knew I was going to be a poultry raiser.
I soon discovered that my four Reds, (including the one with white feathers), were not quiet hens. They were much younger than my Orpingtons, who where about two years old. I had been looking into getting a roo for them, and I decided to look for a small and docile roo. Maybe even one who was not yet matured. I finally found my roo.

(Here are my Orpingtons.) 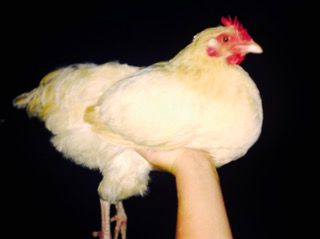 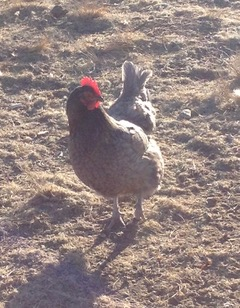 Someone in my area was getting rid of a six month old cockerel, and they wanted to find a home before he fully matured. "He's a sweet boy," They said. "We hatched him ourselves and would keep him, except that he fights with our older rooster. He is free to a good home."
Within a few hours, I was on my way to pick him up. The pictures they put online of him where so gorgeous, and I had fallen in love. Soon, he was in a box in the back of my car and we where headed home. I was so excited!
That night, when I went to put him in with the hens, I realized how big he was. He was a big young cock with a large rose comb and orange-ish eyes. His hackles where white laced with black, and he was quite handsome. He went right into the henhouse, and jumped up on a perch. He seemed to fit right in.
The next morning, I awoke to him crowing. I was surprised! I hadn't thought he was old enough to crow!
I got up and went outside, to see him standing in the doorway of the henhouse, crowing. The hens had all come out, and were watching him rather carefully. They didn't seem to like him. One certain member of my flock was particularly distressed.
Though it wasn't love at first sight, the hens eventually accepted him. Because of his creamy white feathers, I decided to call him Alfredo. The name suited him. Not long after I got him, I let my flock out to range for the first time. What a joy that was, watching the chickens happily parade around the yard! They enjoyed it almost as much as I enjoyed watching them.

(Here is a pic of Alfredo. I had to edit the pic, because there were people in it who asked not to be shown.) 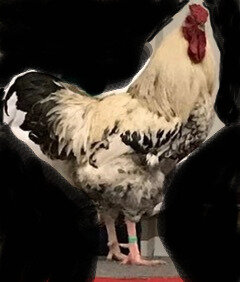 I began letting them out once a day. I looked forward every day to watching them march around the yard, with Alfredo at their head. He was a good roo, young though he was. It soon became obvious to me that my Buff hen was his favorite. She would sit next to him on the perch at night, and was always near him when they ranged.
I was happy, and they were happy. Everything went perfectly, until about a month after Alfredo came. I had some family over, and lots of doors were left open. I had just let the flock out to range, when my little white dog, Rosie, ran out of the house. I didn't have a fence around the yard, it was still being built. The part of the yard that did have a fence was the part she had access to, and she had never seen the chickens. She ran straight for the nearest one, which was my largest RIR. She attacked it, and injured it. I tried to get there in time to stop her, but who can outrun a dog? For a little thing she is really fast.
Alfredo had been in the other side of the yard, and wasn't able to get there in time. I don't know if he would have attacked the dog, but he might have.
I put the flock back in their run, and tried to help my poor little RIR. I soon knew it was no use. The injuries she had received where mortal. Rather than let her suffer, I put her down.
I felt discouraged after that. I felt that I had failed my flock. I had failed to protect them, and it had cost me one of my hens. It wasn't the dogs fault for attacking my chicken, and it wasn't the chicken's fault for not staying closer to the roo. It was my fault, and I felt ready to give up.
But my Roo had other ideas. For the next few days, he would run up to me and dance for me, as if he knew I needed cheering up. I soon decided against giving up. I still had a flock, and they needed me. Not long after, there was a fence to protect my flock from my dog.
Soon, I was ready to get more hens. One of my friends was giving away a few hens, so I went to get them. I brought home a leghorn and two Rocks.
After the hens got to know each other, my backyard was peaceful. I was once again happy.
That did not last long.
I noticed that my young Red with the white feathers was shooting up. She had long legs, much longer than my hens, a long neck, and extremely shiny feathers. She had been my favorite hen, and she would ride around on my shoulder. She also came when I called. The first time my dad had seen the little red hen, he had called her 'Pot Pie.' Much as I hated it, the name stuck.
Soon, I noticed what seemed to be saddle feathers on my hen. I didn't know much about how to tell the gender, but I knew none of my other hens had saddle feathers. Why did this hen have them?
My answer came not long after. It came loud, long and clear. It was a crow. She was a he! I had two roosters, when I only needed one!
I had heard that red roos where mean, so I started looking for a home for my roo. It was no use, no one wanted an extra roo.
One of the reasons I had decided to raise chickens was for meat, but I wasn't ready to butcher yet! The thought of my poor little cockerel being killed horrified me. I knew I had to keep him, whatever it cost.
I didn't have another coop, so my poor little boy had to live with the other roo. He was constantly chased from one place to another.
I still didn't like the idea of killing chickens, but little did I know that butchering was the answer. Some friends of mine convinced me to order some Cornish X meatbirds, and I soon gave in. I had to have another coop to house the meatbirds, so I soon had two coops. for several weeks before the meatbirds where old enough to live outside, I had an empty coop. That's where 'Pot Pie' lived.
About the time a friend offered me a tom turkey, the meatbirds where ready to live outside. I soon had a third coop, this one for my turkey. I put my little 'Pot Pie' in with the turkey. After a while, Alfredo was too old to keep up with the young roo, and was constantly losing fights. My dad finally told me that we could only keep one roo. That was hard for me. Finally, I decided to keep Pot Pie. He was, after all, the younger of the two. He became the flock leader, and I still have him to this day. He is in the prime of his life.

(Here is a pic of Pot Pie, guarding his flock.) 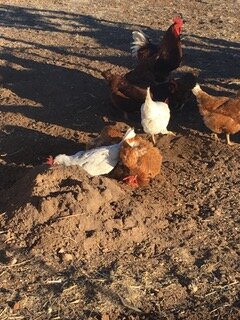 By the time I had my first turkey, I had brought home several chicks.
That was the story of how I got to where I am today. Sadly, of my original flock only two remain. But I have learned some important lessons from my experiences. First, don't just give up. It may seem like a good option, but it's not. Mistakes happen. That doesn't mean you have to give up.
Second, I learned to take responsibility for and learn from my mistakes. No matter what you do, bad things will happen. None of us can stop that. Lets instead learn from our mistakes, then try to help others from our experiences! This is why I like BYC. It allows us to teach each other, and learn from each other.
Thanks for reading!
Reactions: Dottie the Chicken, OneHappyRooster and SoftSilkie
About author

-7-6-
I live on a small farm with lots of birds. Animals of all kinds fascinate me. I want to be an author. Thanks to anyone who reads my content!
Just to let you know, I really do want to hear your opinions on what I can do to improve my writing skills.
All advice is welcome!
Thanks so much,
M. H. Fielding.