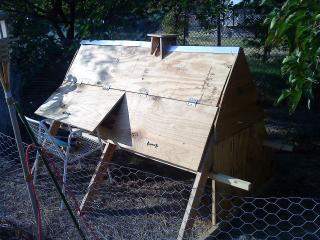 GryEyes' First Coop - A Tractor!​
I had no carpentry skills when I began this project, and many would say I still don't. [grin] But now I own a power drill and a circular saw, and I've been using them. The chicken coop/tractor is a little wonky and I'm not quite done with it, but I don't think the chickens I haven't gotten yet will mind.​ ​
Here's the ventilation "cupola" I hammered together. I was worried that the plans I was TRYING to follow didn't provide any ventilation (other than the places where there were gaps, but that's bad construction, not PLANNING). I'm sure I can build something better, later, but this will do for right now.​ ​
Here's some detail of the hardware used for the "egg collection" hatch and door to the lower pen area. I decided no raccoon would be able to open a twist-closure carabiner, so that's what I use to secure the latch. This weekend I'll be attaching the wire enclosure for the bottom pen.​ ​
Those pole things poking through the plywood are the "handles" which are supposed to allow two people to move the tractor, but I live alone, so that's gonna be interesting. Still, they were in the plans, and I might have a friend help, some day... so they're there. ​ This is the back side, showing the portion where I put the plywood all the way down to the ground in one corner, per the instructions I found elsewhere on BYC. (Chickens will run to a corner to escape racoons, instead of gathering in the middle, away from all walls; if the walls are only wire or hardware cloth, claws could still damage the huddled chickens. This gives them a secure corner when they're downstairs.)​ And this is the ramp to the upstairs, with a wire threaded through the floor and up through the top "V" of the roof, to haul the ramp up at night and close the floor hatch.​ I've placed linoleum on the upstairs, inside floor since the above photo was taken. I'll be using deep litter, so I'm also putting a little rail around the hatch opening to help keep the litter inside.
Temptation at checking out chicks "ahead of time" at a feed store proved too great; I bought four, each a different breed. I was sensible enough to buy "older" chicks for those I could - about a week old. But there were no older chicks in the Brahma brooder, so one of my new peeps was only 2 days old. By the time I had them five days, the 3 older chicks had names: Rhoda, Rebecca and Hilary. The temporary name for the baby is "FuzzButt."​ (More to follow as I learn how to use this page feature.)​