Article Gallery
Leave a rating
Laney's Little Flock of Crazies!
​
I started off living away from my dads, with 8 chickens... 3 Frizzles (Elvis, Jareth and Sarah), 3 Pekins (Cosette, Cameron and River) and 2 of random unknown breed (Darla and Bette).... So when I first moved back to my fathers, we made a pen for the chickens at the back of our half acre property.... My brother lives down there in his own place, and said he was happy to have the chickens down there.

Well, for an extended period, my two Frizzle Roosters, Jareth and Elvis, kept waking him up (at I believe, something like.... 4am ) ... so I moved the pair, and my Frizzle hen Sarah with them, up into my fathers back yard. This left 3 Frizzles in my fathers yard, and 5 chickens in my brothers yard. Then disaster!
Only two nights later, my brother was awoken at about 5am by an insane hysterical shrieking from the backyard. My Pekin hen Cosette, was standing in the middle of the yard, shrieking, while a fox stood no less than 2 yards away, devouring her friends. My brother ran into the yard, taking a shot at the fox with his sling-shot. The fox disappeared. 4 of the 5 chickens were dead.
I was informed first thing upon waking and I went down to retrieve my little Cosette, the only survivor. No way in hell was I leaving her there.
She was placed in my backyard with the three Frizzles.

A few weeks later, I received four more chickens. A purebred Silky (Floof), a XBreed Silky (Flower) and a weird looking game bird crossbreed of some variation. A butt ugly thing that had super long legs, and could fly up onto our 2nd storey roof -No lie- (Cretin) and a pretty, small sized Sussex layer (Princess).

Well, I had this little herd of 7 in my backyard. They weren't there long when Sarah, the Frizzle hen went clucky. After a few days, she was no longer laying eggs, but my Pekin hen, Cosette, WAS.... Sarah of course, diligently stole these eggs for her own sitting fun.
Dad finally got fed up with the chickens pooping all over the backyard and made them a pen a little farther down, but thankfully, still close enough to the house that its safe. Sarah was left in the backyard sitting on the eggs that she had stolen from the lovely Cosette. I told dad I didn't want her with the others because when the babies hatched, the others might attack and kill the babies. Dad was fine with this.

Within a week, one of my Frizzle Roosters, Elvis, was dead of unknown cause. We removed the body and no big deal.
Within a week of him dying, my Silky, Floof, completely disappeared. No body, no trace of her anywhere.
And then within another few days, Cretin the Ugly, disappeared also. Off into the abyss of unknowns.

In the backyard meanwhile.... Sarah's absconded eggs, stolen from my precious survivor, Cosette, had hatched. Four babies. Adorable. One was born with a large hard, orange thing on the outside of its stomach... due to this abnormality, it couldn't sit properly, or walk properly. And it died within 24 hours.
Of the other three babies? Sarah, when digging in the dirt accidentally dug the dirt into a big mound, RIGHT NEXT TO THE WATER BOWL!!! This gave a direct path up and into said water bowl. One beautiful baby drowned in the water bowl early hours of the morning.
And another, for some random reason was found dead.
What was left? A lone, completely white baby who I later named Hobbit.... a young one who effectively speaking has "two moms". The mom that laid the egg, and the one that sat on the egg and now is still looking after the offspring!

So, things went well for a few weeks, but then tragedy. I walk down into the chicken yard farther down, to find my pretty Sussex with a snapped neck. She had reached her head through the chicken wire to get at something on the other side and her head got stuck. Thrashing around, she managed to break her little neck. So, that left me with a flock of THREE, in the bottom yard.... the main man, Jareth, my favourite, Cosette, and the strange looking crossbred Silky, Flower.
The strangest thing was, in the bottom yard... its almost as though Cosette and Jareth have formed their own couple, and that they have adopted Flower.
Cosette and Jareth are never far from each others sides... and Flower follows along behind like a diligent little chick following mother. They're like a lovely little family....

Until Cosette went clucky (not that she had anything to sit on, as she wasn't laying anything and neither was Flower)!
I was thrilled!


MEANWHILE.... in the top backyard:
Sarah and her little Hobbit are going well. Sarah had begun laying eggs again, and though I didn't think about it, I grabbed a handful of her eggs (four in total) and stuffed them under my broody Cosette. Cosette maintained her cluckiness for the next 10 days weeks... before deciding it bored her, and leaving her eggs alone! I wondered if maybe she somehow knew the eggs weren't fertile? So I candled them.

Not thinking much about where baby had come from, I ecstatically raced into the house and tried to think... "how do I make an incubator". Dad, who knows how to do these things, but doesn't care much, wasn't much help. So.... I was left without much choice in the meantime. I stuck a little basket on top of my computer... and put the egg in it with a thermometer. Amazingly, the temperature there was perfect! LOL!!!!!!! I of course immediately ordered a small incubator online, but until it arrived... I had my computer incubating the egg!

On one of the days I was waiting for the incubator to arrive, I checked the egg, and went to turn it, as you do, to find the egg had heated up massively. The egg felt like it had been COOKED, literally hard boiled hot. I of course freaked out, cooled it down as quick as I could, and raced where? To the internet, and the backyardchickens forums to say "noooo! I think I killed it".... I had a few kind people advise me that maybe I didn't, it wasn't a huge deal... just wait it out. But..... it was at this point that I began to wonder and think about the egg. I knew that it was Sarah who had laid it, and I knew it was fertile, which meant of course, that my rooster, Jareth, must have at some point abandoned his lady love Cosette and gone to do the dirty with Sarah. How rude! But this meant, in my way of thinking, guaranteed Frizzle baby! Hooray! I DEFINITELY wanted this one to hatch. I didn't learn until later about something called "Frazzles" and how many have problems of a nasty kind.

Anyway, I was very thankful when my incubator arrived (a WEEK after I'd ordered mind you). So, the egg was in the incubator for the next 4 days, until... joy of joy, it hatched. A beautiful lonely baby who I named Nugget. LOL!!! Nugget then seemed to think I personally was "mom" and every time I walked away from her in the brooder, she would start shrieking in hysterical distress. I tried a stuffed toy, I tried a ticking clock stuffed INSIDE the toy so chick could still hear it... I tried a mirror. NOTHING.
So I was forced to buy her two companions.
I found the nearest breeder I could who had chicks and got two similarly aged Isa Browns. So now, this little trio is happy in the brooder. 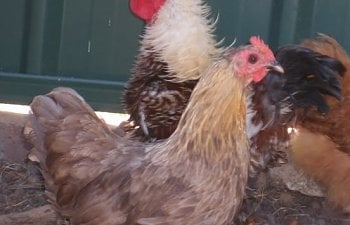 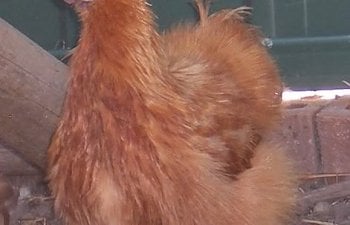 Sarah: adoptive and obsessive "mother" of Hobbit
Hobbit: actual daughter of Cosette and Jareth, but cared for by Sarah! 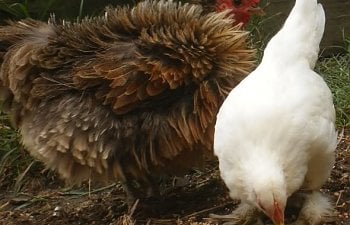 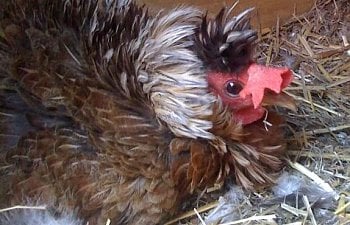 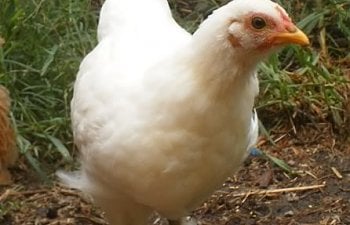 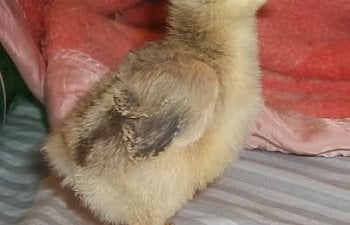 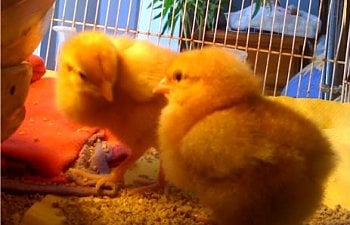 So, all in all, my little family unit has gotten all confused!
I recently made attempts to put Sarah and Hobbit in the lower pen with Jareth, Cosette and Flower, and they wouldn't have it! They ran and hid in the grass, and as soon as I walked away, they fled the scene and reached the backyard before I did!