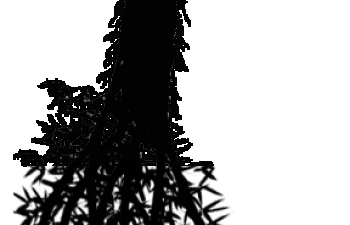 ​
Warning: I tend to talk way too much when I comment, so don't think I am trying to be a know it all, because chances are you know more than I do...I just love talking about peafowl, sorry about that some times I think I should just say nothing cause I must get anyoning at times. 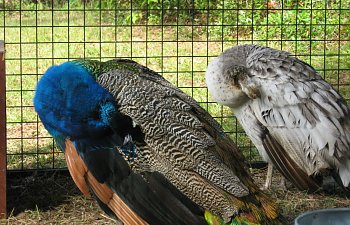 The males name is Fire and the female is Ice. Once we free-ranged them all was well until Fire ran away and hasn't come back home since. He will be greatly missed. I am sure he is still out there somewere roaming around in search of who knows what since he didn't even stick around places that have peafowl. Fire: 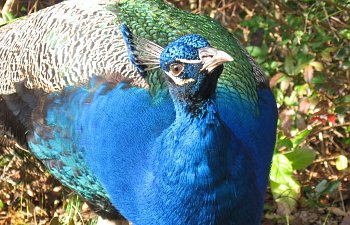 Currently I have 5 peafowl all in a 40x50' pen. Maybe I will create a new page to show pics and talk about the pen. Now I will show pictures and tell a bit of background info about the peafowl I have.
Ice: Ice is a blackshoulder peahen. She is going to be probably around 3-4 this year. Ice was a zoo peafowl, and when the zoo closed she went to a lady who has peafowl and she took all the zoo peafowl and was selling them. Ice is our only remaining first bird from our pair since Fire ran off. Ice no longer has a free-range life, but she is very happy to be the boss bird only answering to the athority of the two males. She also gets the kind and good lookin' Dragon as her mate. 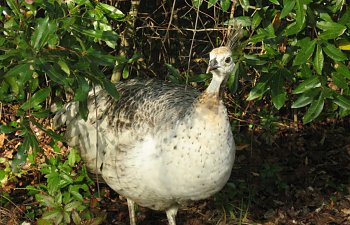 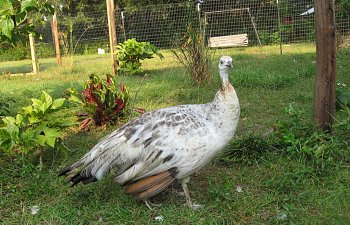 Alto: Alto is an India Blue peacock that is two this year. He is quite the unique one of the bunch. We couldn't have just two peahens right, so we got Alto from the same lady we got Ice and Fire from. He was in a pen with another male the same age, but Alto was taller so I said I wanted the taller one. I also noticed he acted sort of comical so I wanted him. He has turned out to be a very wonderful bird! He has his first eye feather this year and he is the friendliest of them all. He likes to follow me around the pen and is very interested in what I am doing. He just loves to display for the peahens too but his favorite girl is Pip! 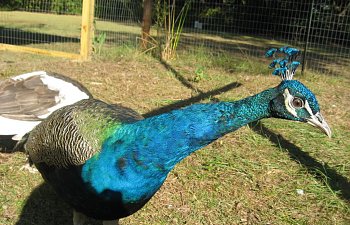 Damsel: Damsel is my first India blue pied peafowl! Damsel is a peahen that is two this year just like Pip and Alto. We got Damsel the same day we got our pied male, but we got Damsel first. Damsel was very flighty when we got her and she was all ruffled up because the boy we bought her from had trouble catching her. She lost a ton of feathers! As if that wasn't enough Ice horribly picked on her always jumping on her, but now that doesn't happen as much. Damsel went from being the spookiest to being the most likely to take any food out of my hand without any hesitation. Even Alto hesitates sometimes but Damsel is totally trusting and loves to try new foods! 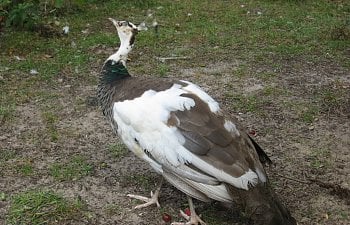 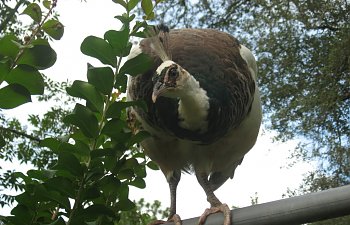 Peep: This is the newest addition, my first ever peachick! This chick came from an egg I collected in the peafowl pen and I was able to hatch it out in my wonderful GQF styrofome incubator! This is the first chick of any kind I have ever hatched and the first baby animal I have ever raised so it is very exciting and new. For now we are calling the peachick Peep, because of how much noise it makes. We think Peep is a male, but are still not sure. Peep is about three weeks old and is a dark pied, meaning he is split to pied. I am pretty sure Damsel is the mom and I know Dragon is the father. Peep is living inside our house for now in a baby playpen with a top. 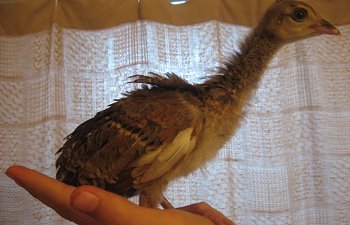 The Three Angels:
(picture to come)
These three white peachicks came as a bit of a surprise. We were suposed to get one free white peachick from a lady but our friend bought three white peachicks from her and gave them all to us for free to raise on one condition: That we give him one of them, a male one. It is hard to sex white peafowl but judging by the size of the three, it looks like I have two girls and a boy which is too bad cause I wanted a male white peacock for myself! Oh well at least they were free! One of them I like a lot, it is the smallest one that I definately think is female. I call her Goldielox.
Peafowl that have passed away:
A pied peachick that hatched too soon in 2011 was my first peafowl fatality (one of the peafowl must have accidently broken open the chick's shell before it was time to hatch), then on August 5, 2011 my dear peacock Dragon was found dead in the pen. We think a raccoon killed him. Not too many days later Pip my two year old IB peahen was also killed by a coon. She was Alto's girlfriend.

I hope you have enjoyed the beauty of peafowl! 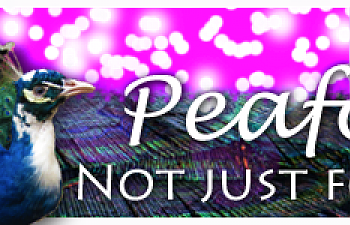 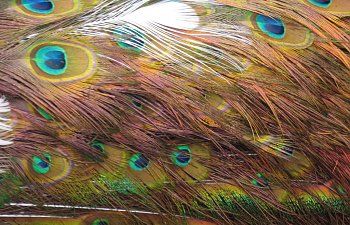 Nice Peafowl You Have there i have one Black Shouldered Peahen as well (well thats what i think she/he is.) I want to know if wild peafowl are okay to catch or whats up with that?