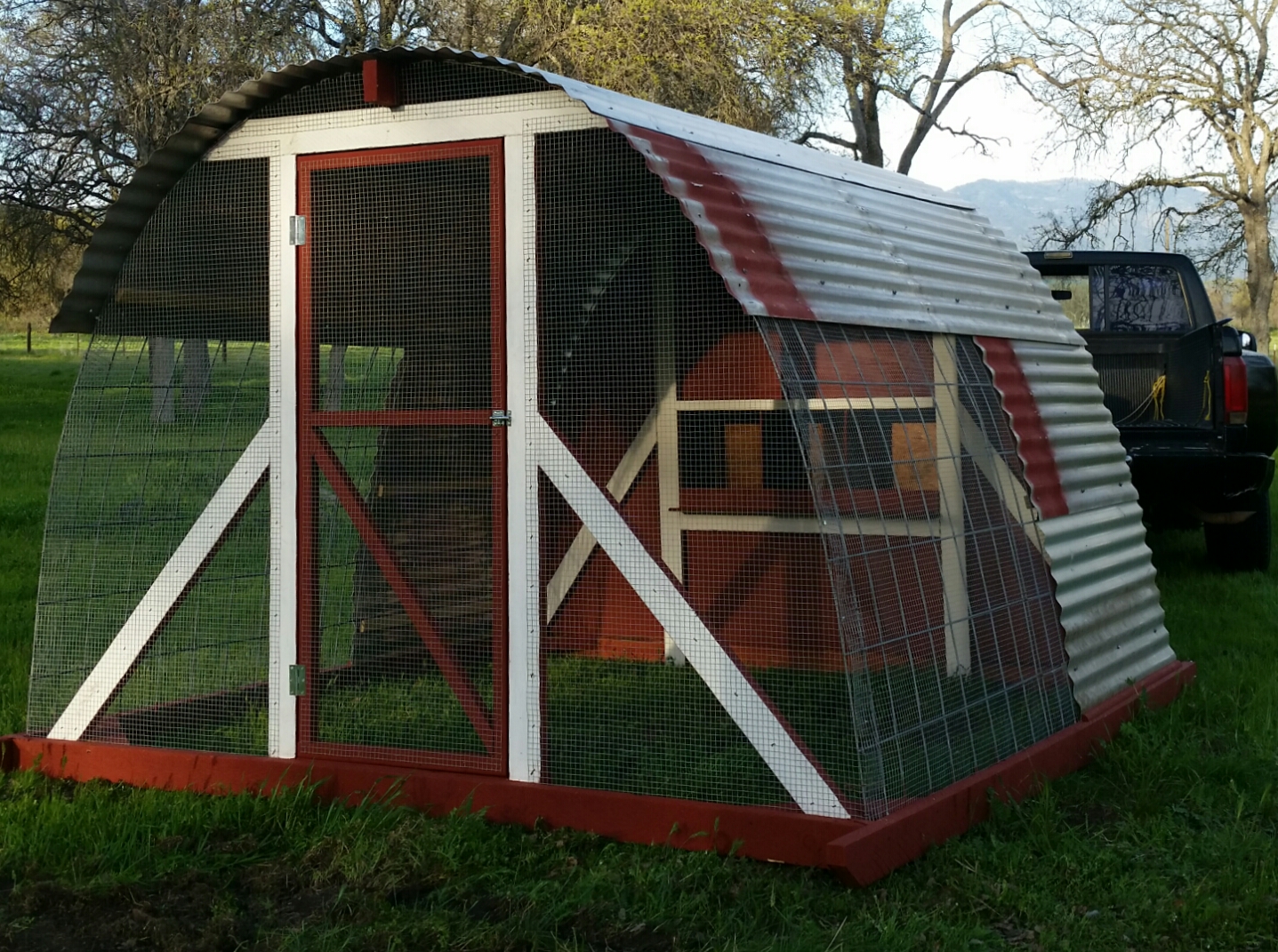 Our cattle panel coop was inspired by multiple designs, including several here on BYC. Thank you to everyone who has shared their photos and experience. It's been a big help. Since we combined ideas from several coops, we worked things out as we went and didn't have formal plans.

We used a basic 8x8' two panel design with 10' skids for dragging. The cattle panels cost $25.99 each at TSC and measure 16' long and 50' wide. To transport the cattle panels, they can be arched up inside the bed of a pickup truck, several at a time. If you're having trouble visualizing this, you can look it up on YouTube. When setting the panels in the frame, we first partially drilled in some screws for them to rest on. We then used large U-shaped fence staples to secure them. 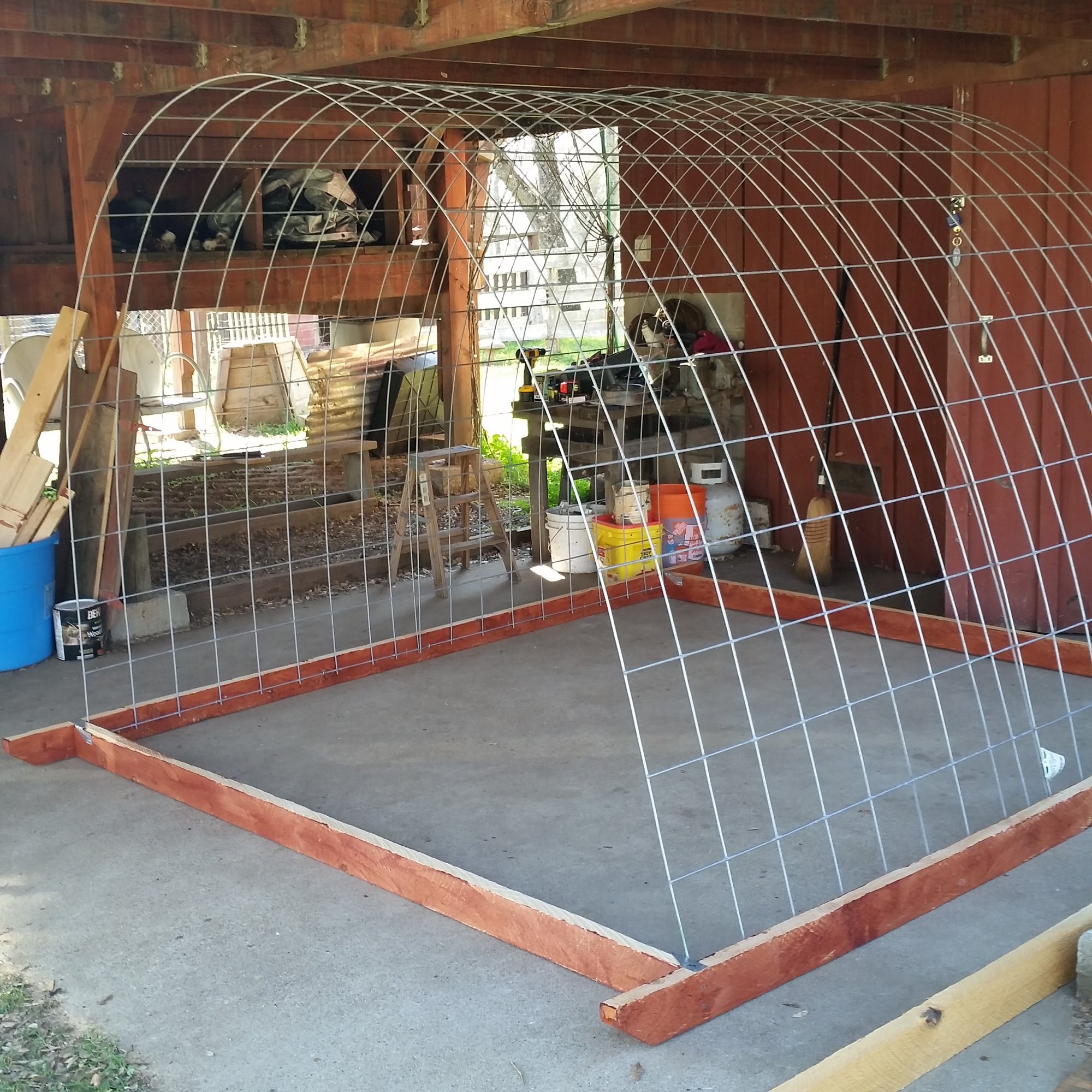 Since we plan to drag the coop it needed to have a really sturdy frame. Everything is secured with screws, not nails. We added corner braces, a top beam, and diagonal supports. The cattle panels are secured to the beams (front and back horizontal beams and top lengthwise beam) with U-shaped fence staples. In the front we framed in a door and in the back an opening for nest boxes. We used minimal screws to secure the door frame and diagonal braces to the bottom of the base in front. An explanation will follow. Note: The metal sitting on top is just a scrap to help us visualize the roof. Also, I didn't take any photos but we made a plumb bob with string and a rock and hung it from the top of the arch. We marked the center of the bottom board and then made sure these two matched up as we attached the framing. 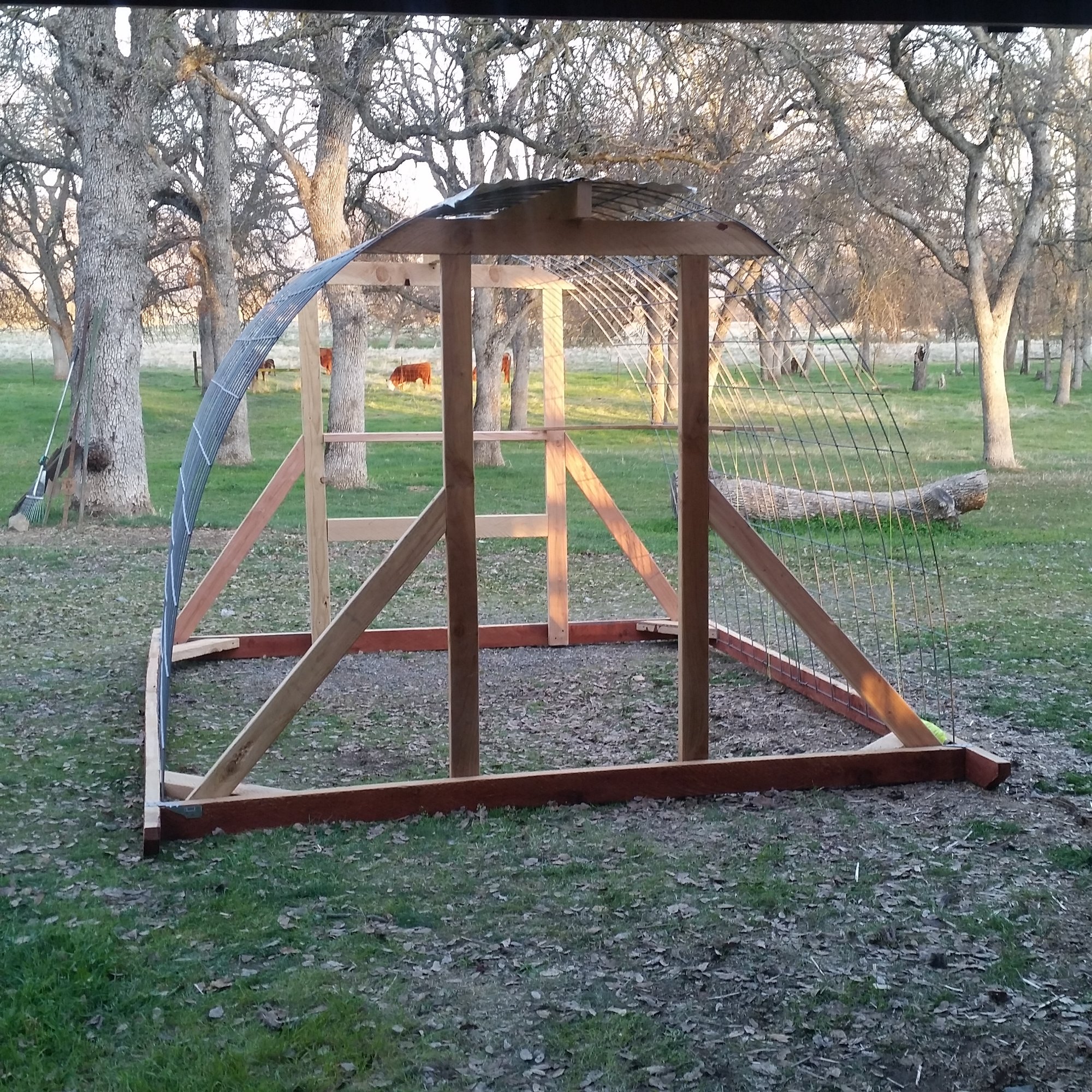 Next we built the exterior of the nest box and began cutting and piecing together sections of plywood for the back wall, attaching them to the frame and diagonal supports. For the curved edge, we traced the line with a pencil and then cut with a jig saw. Note: I chose a top opening nest box design even after reading warnings that they leak. The warnings are true and I should have listened. However, I believe a good solution will be a flexible strip of rubber that covers the length of the hinge seam. 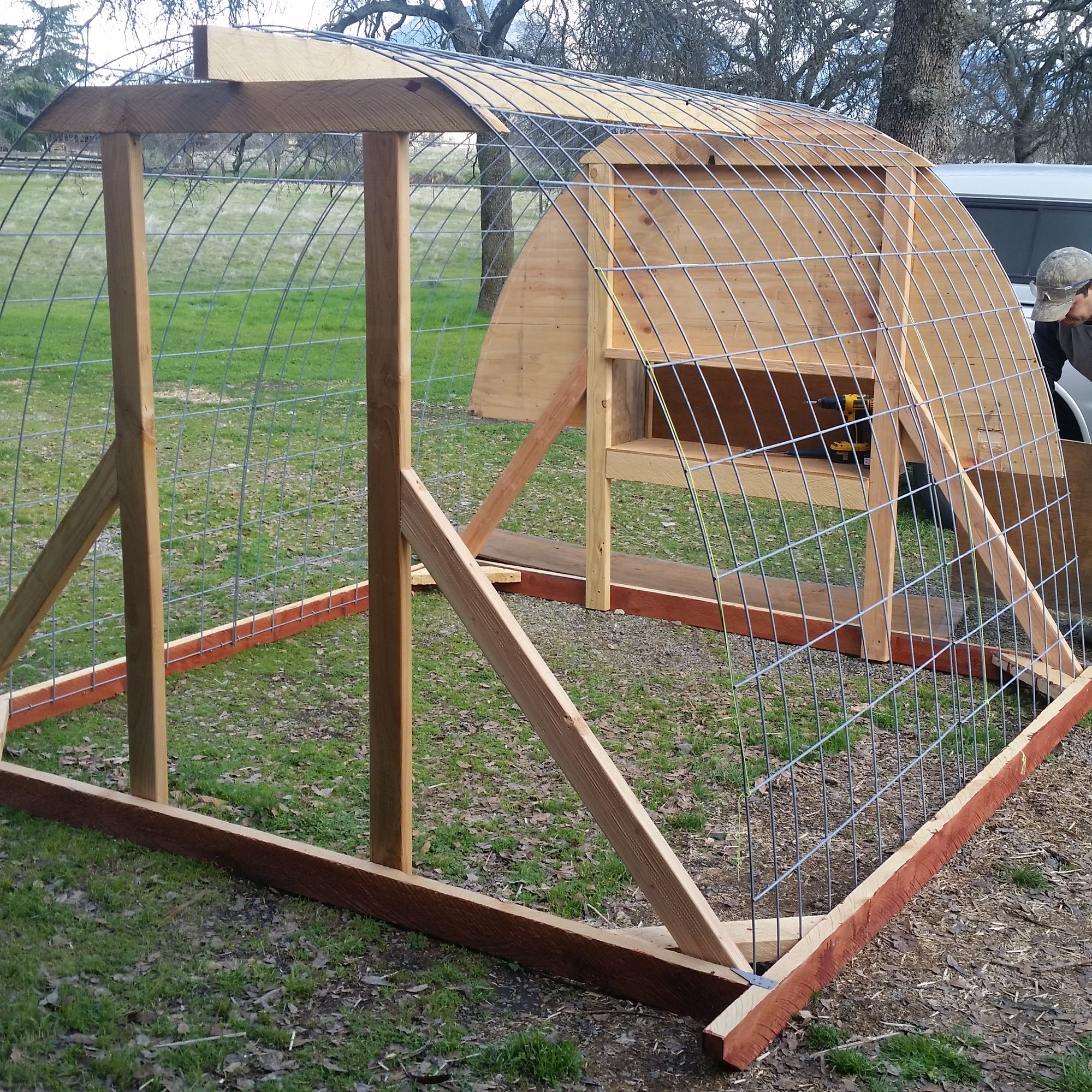 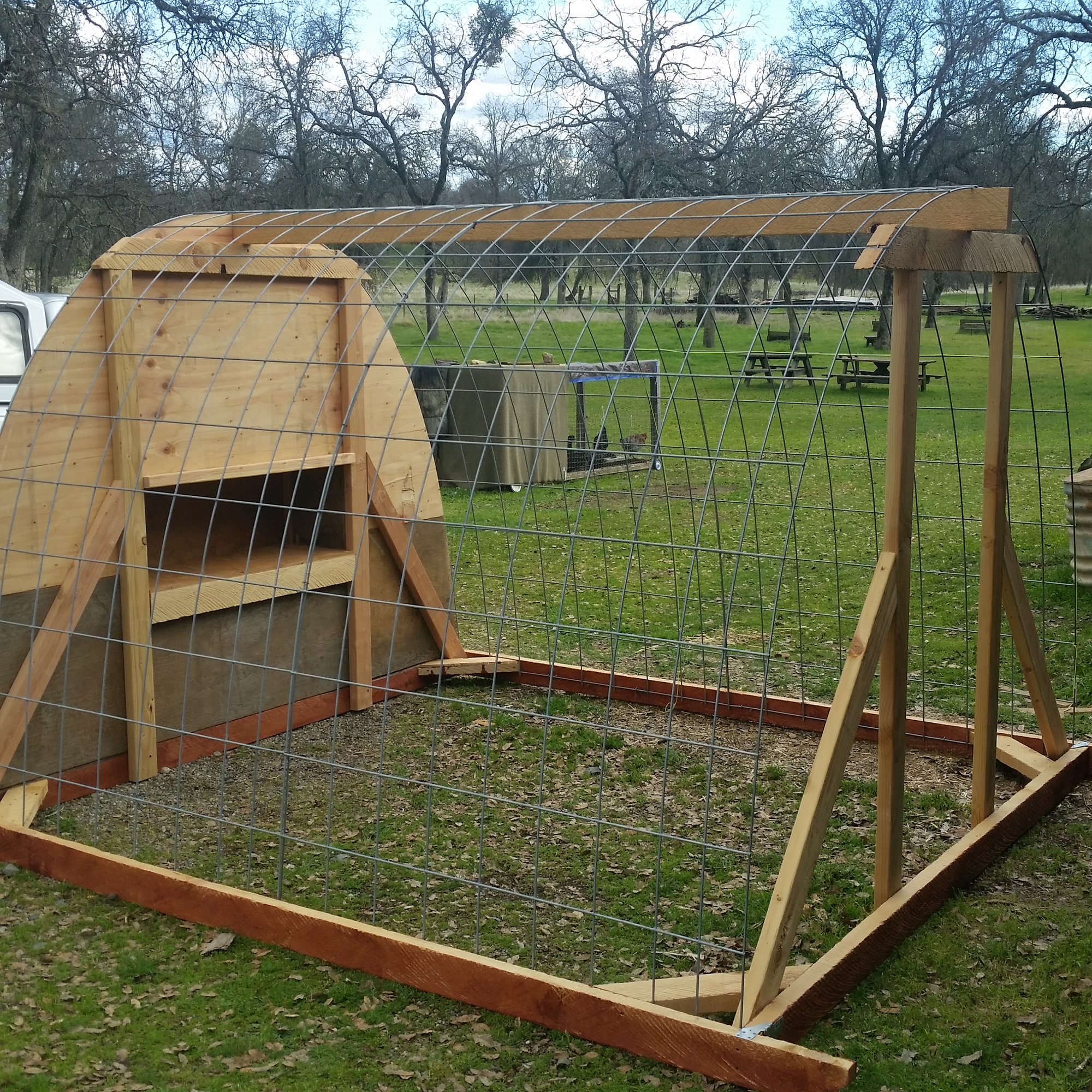 At this point we decided to paint so it would be done before attaching the hardware cloth to the front. We used one coat of primer and two coats of the cheap red and white fence paints from TSC. In the first photo you can see the difference between one coat on the nest box, which looks like a wash, and two coats on the wall. Two coats provided good coverage and stood up to rain within a day of drying. 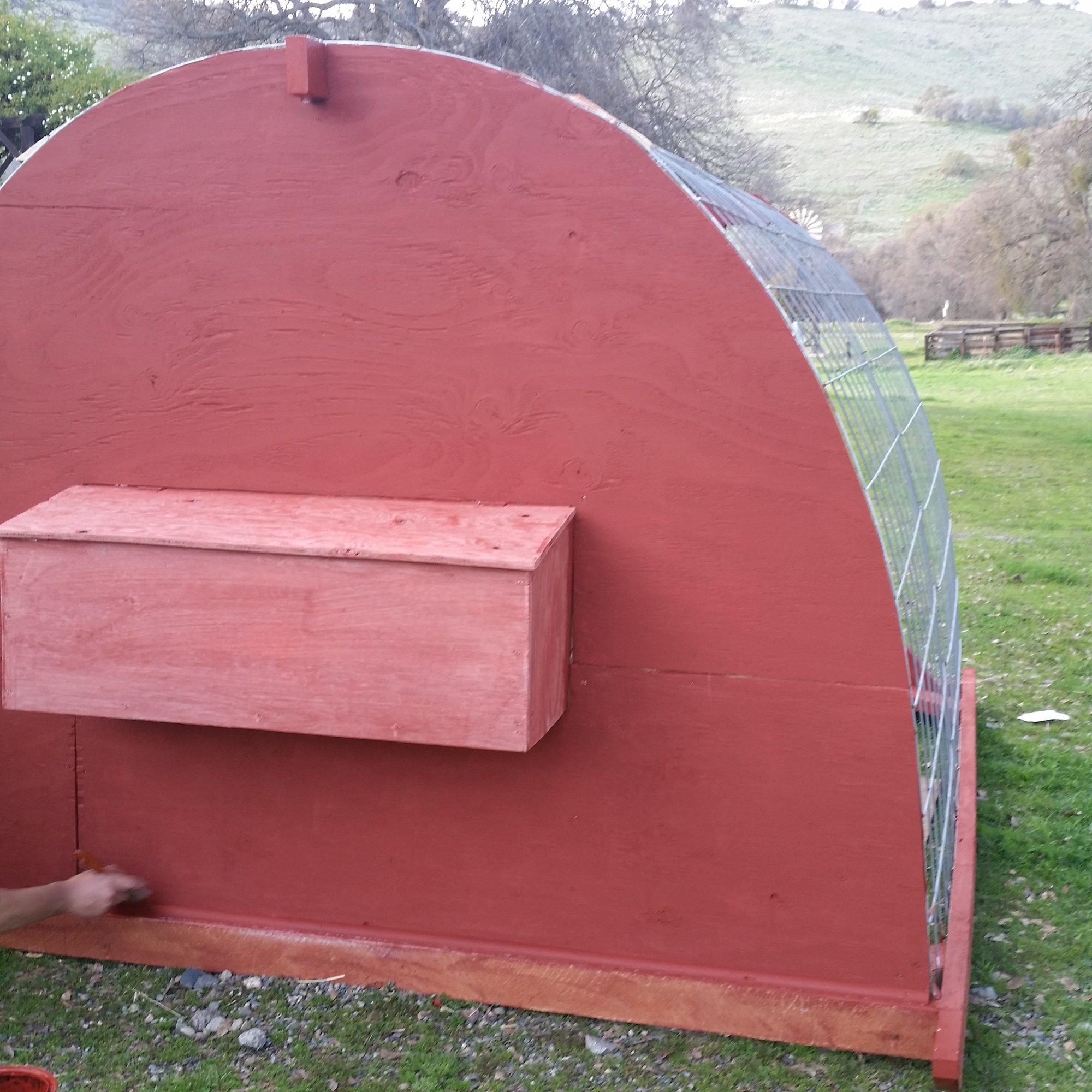 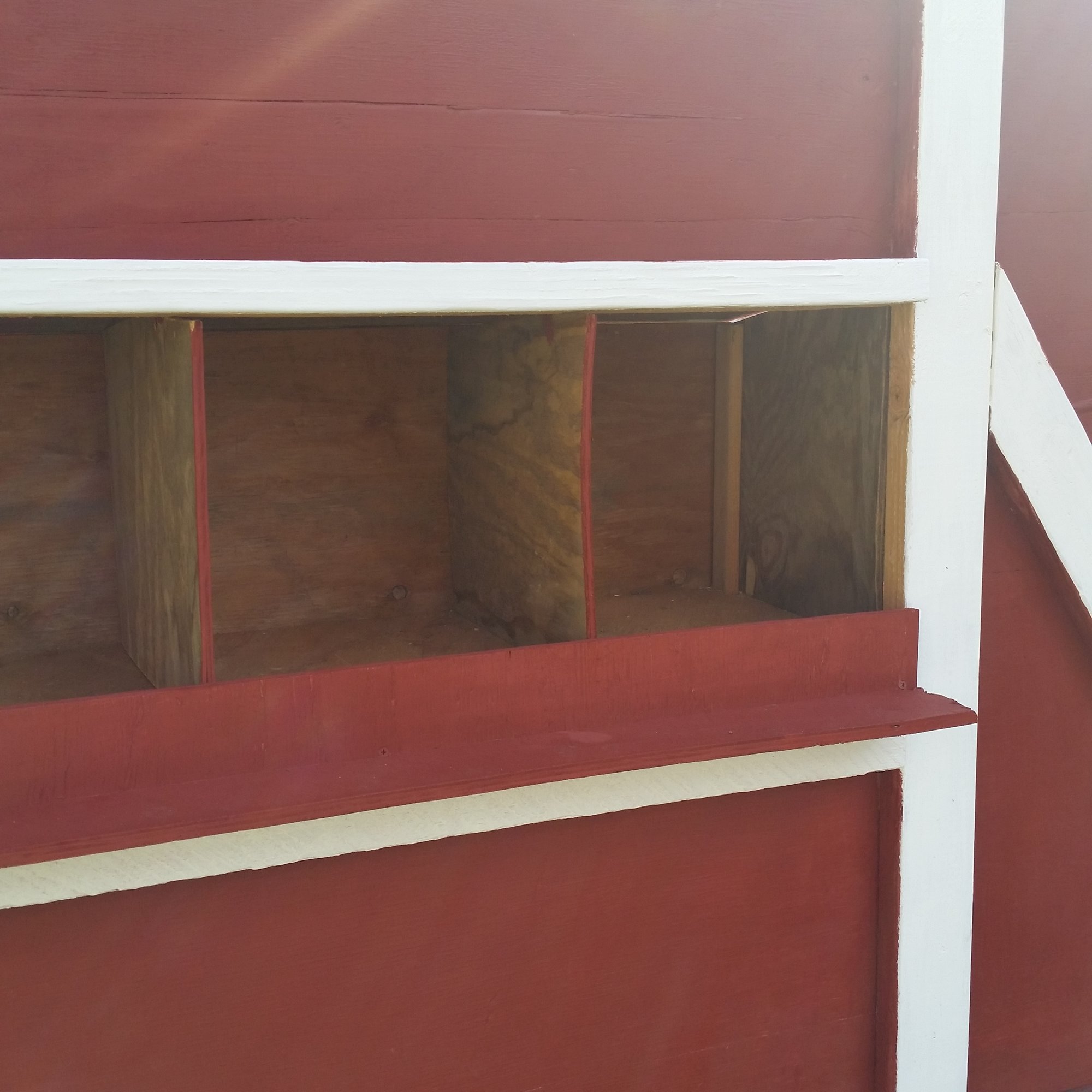 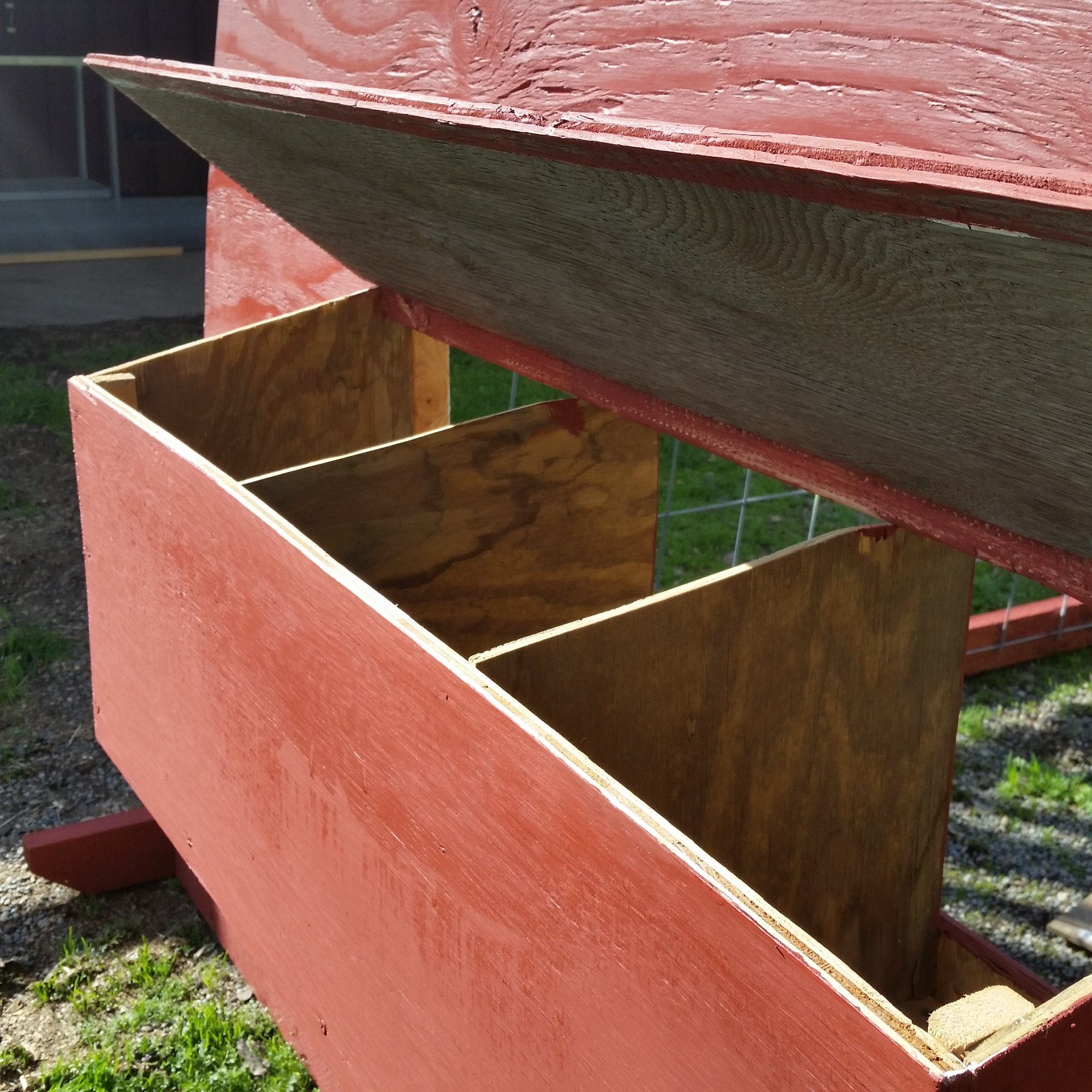 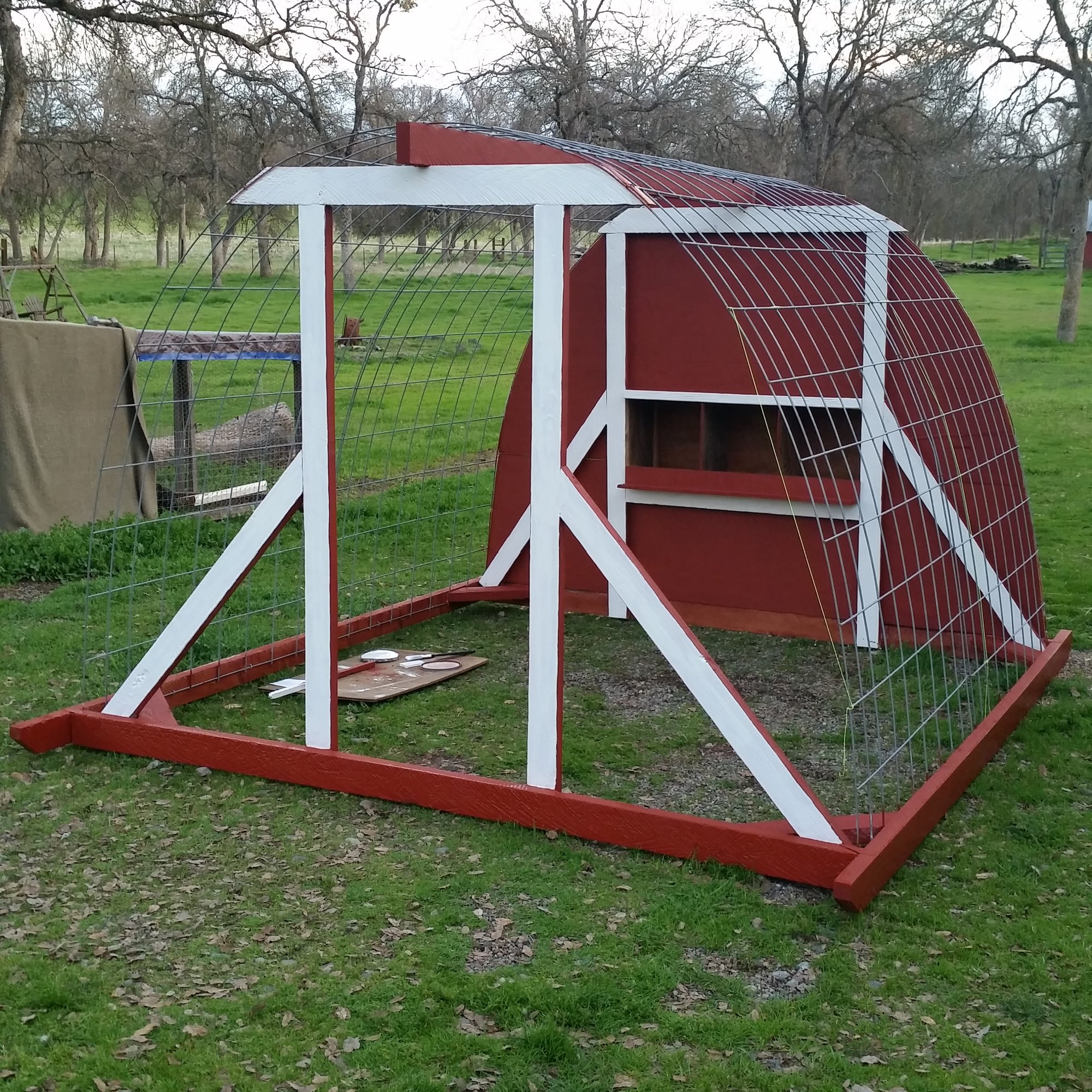 The next step was attaching hardware cloth to the front and sides. We chose the 1/2" size. A 48"x50' roll from Amazon was around $68, including shipping. We attached the front sections first since we wanted the folded edges to lay under the side pieces. I wanted the lower edges to be secured down in between the baseboard and vertical supports so this is why we didn't screw those pieces in too well. We measured and cut the hardware cloth then reversed out the screws to wedge it down in there before screwing everything back in and adding additional screws. This was a little challenging but worked well. We secured it at the bottom with screws and washers. On the outside we used small U-shaped staples that you hammer in. We left several inches of overhang around the curved edges to be trimmed and folded over. 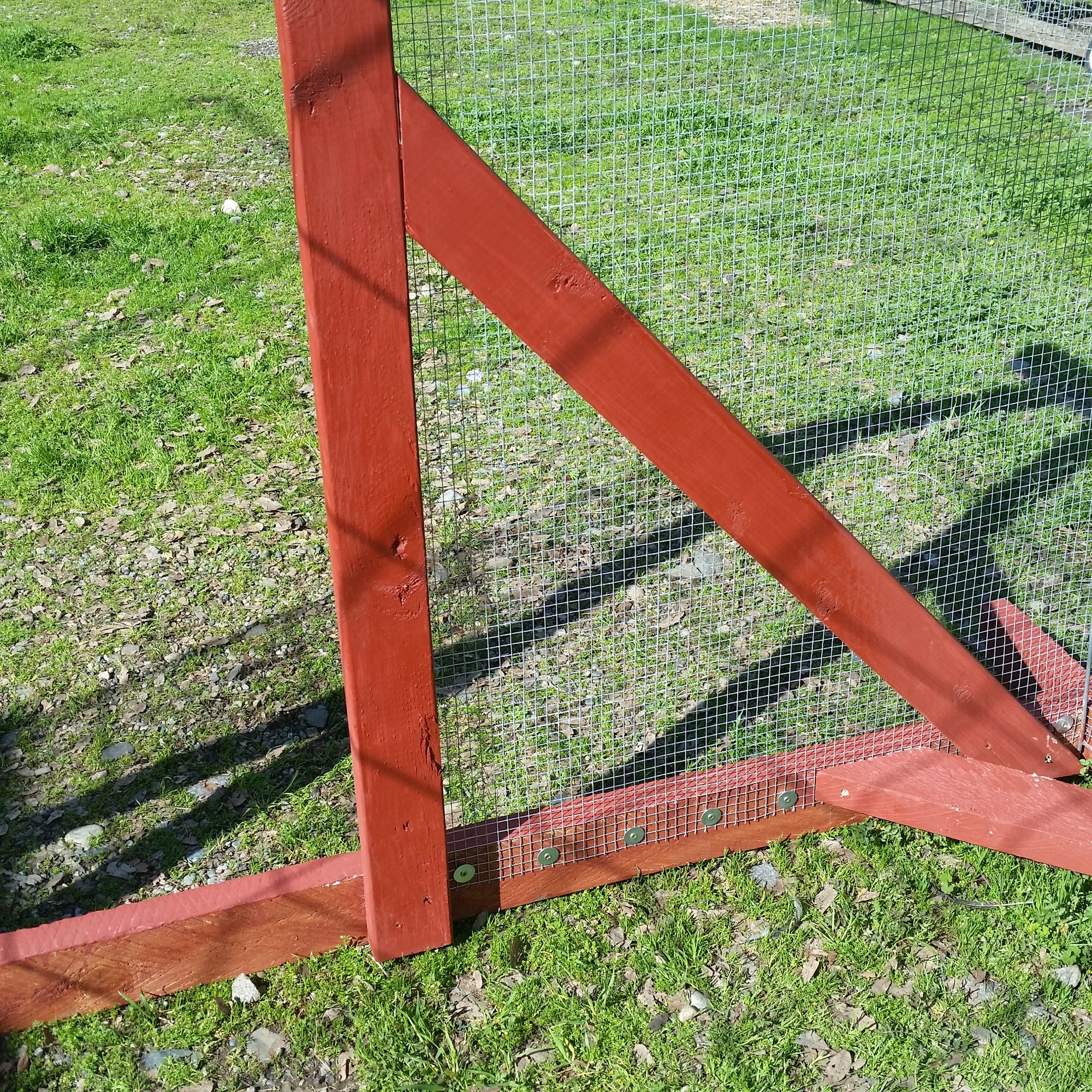 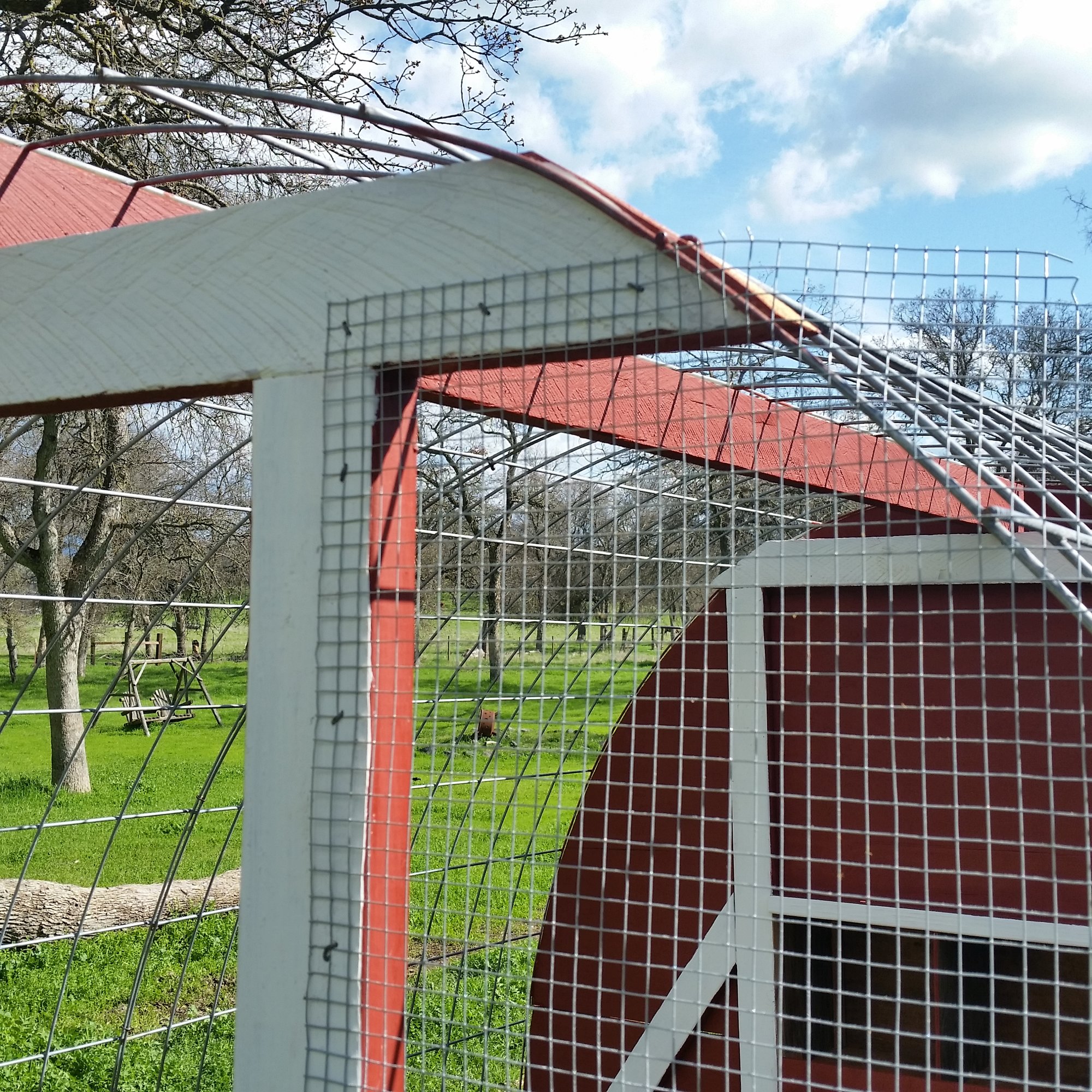 The side sections of hardware cloth only cover the portion of the sides that will not be covered with corrugated roofing. The pieces were easy to slip between the baseboards and cattle panels and secure with screws and washers. We did also unscrew the front corner braces to wedge it underneath. Once everything was fitted tightly we secured the front and side edges to the cattle panel with hog rings. Note: Rather than only using hardware cloth on a small section of the sides, I think it would have been better to run it the full length, going under the corrugated siding. 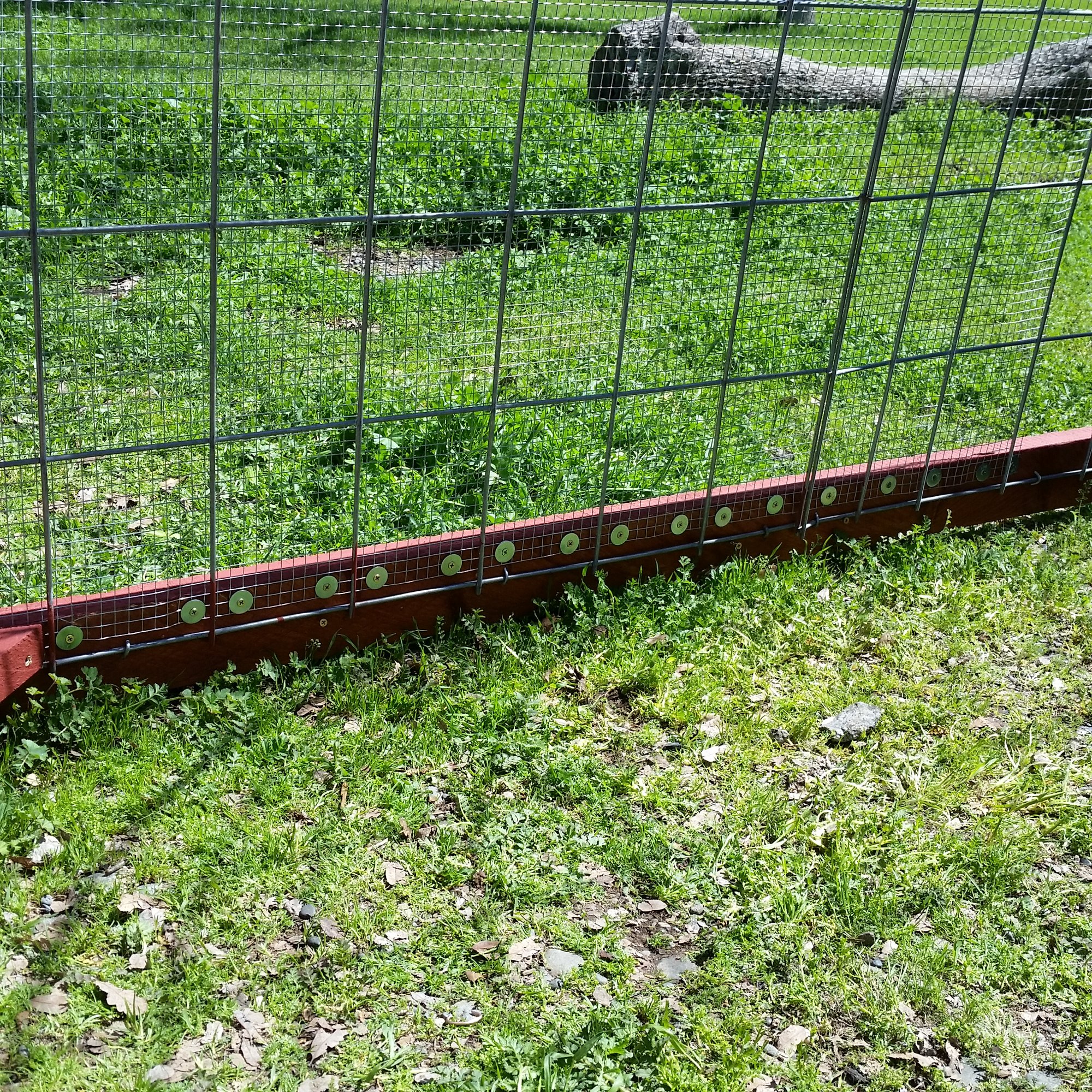 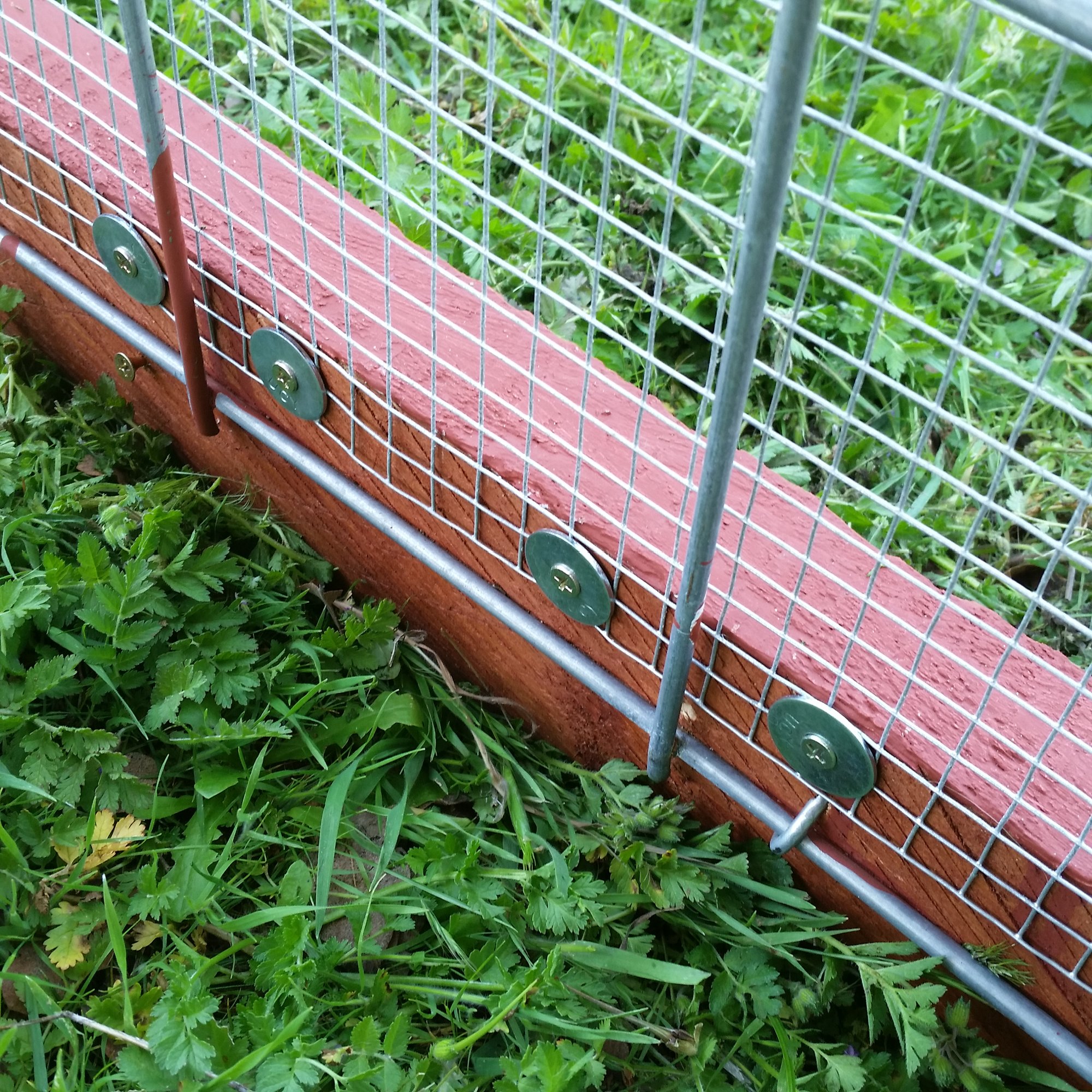 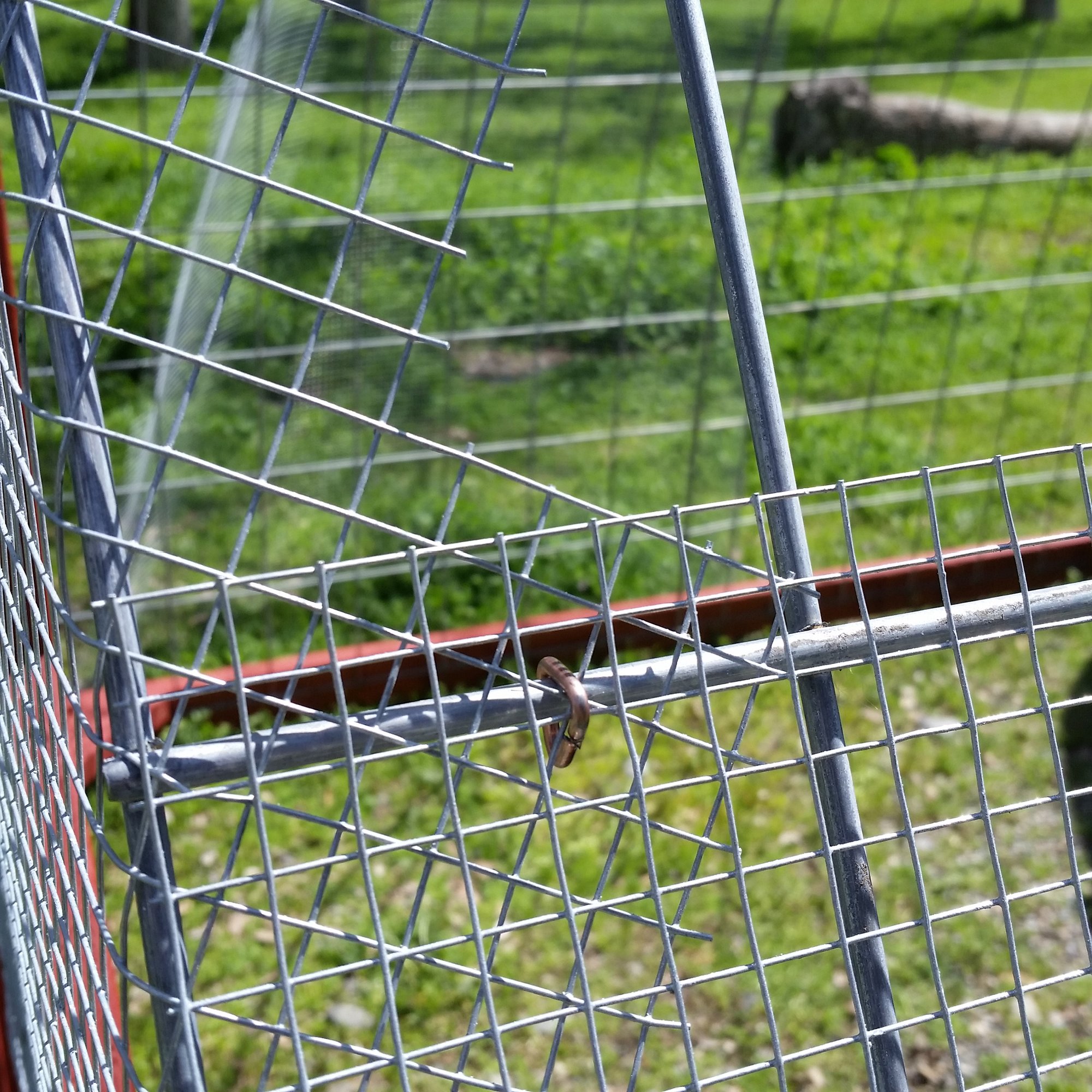 We attached the door and didn't like the gap we saw at the bottom so we added an extra board to make a better threshold plus a small lip that acts as a backstop and keeps it from swinging inward against the hinges. You can see the unpainted threshold in the second photo. 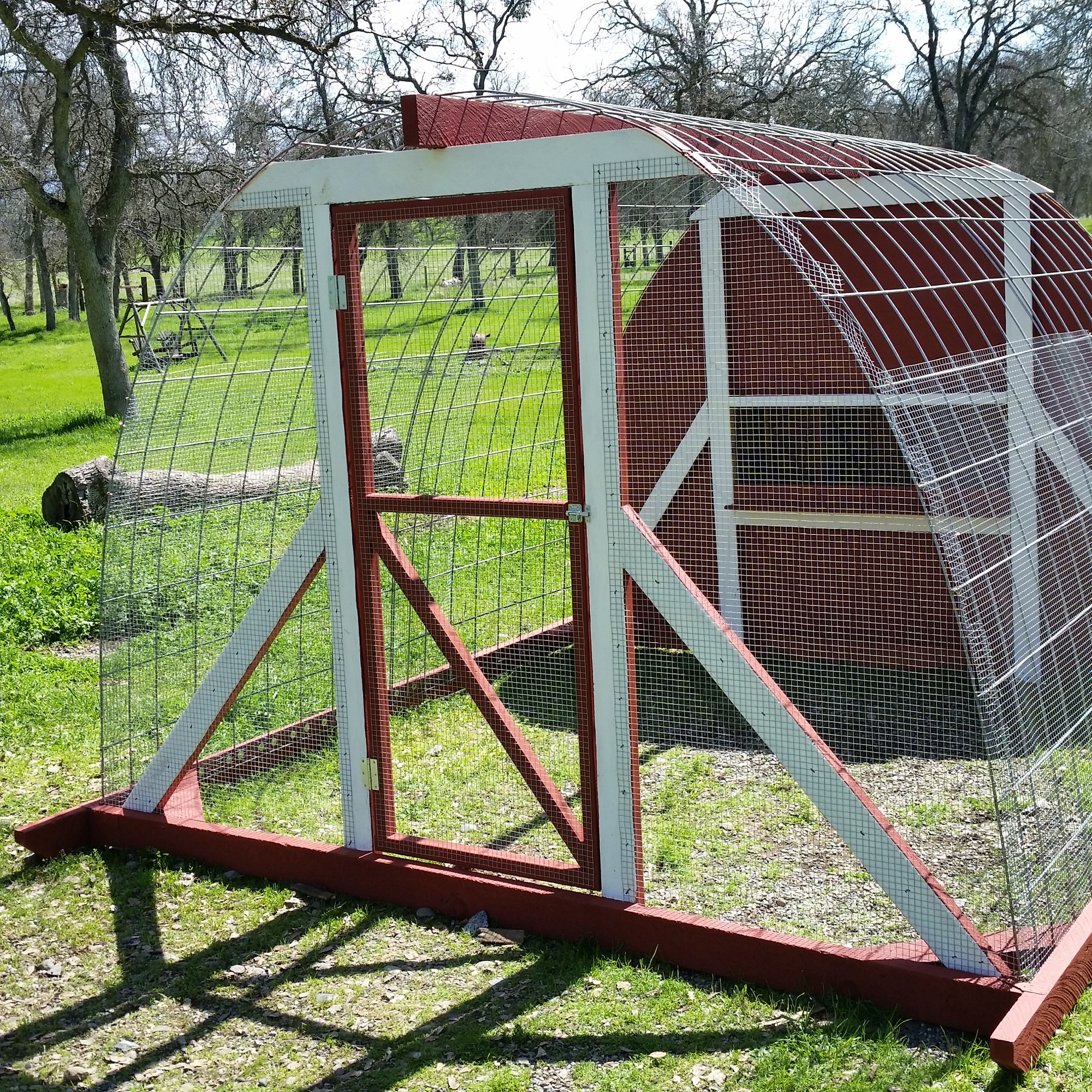 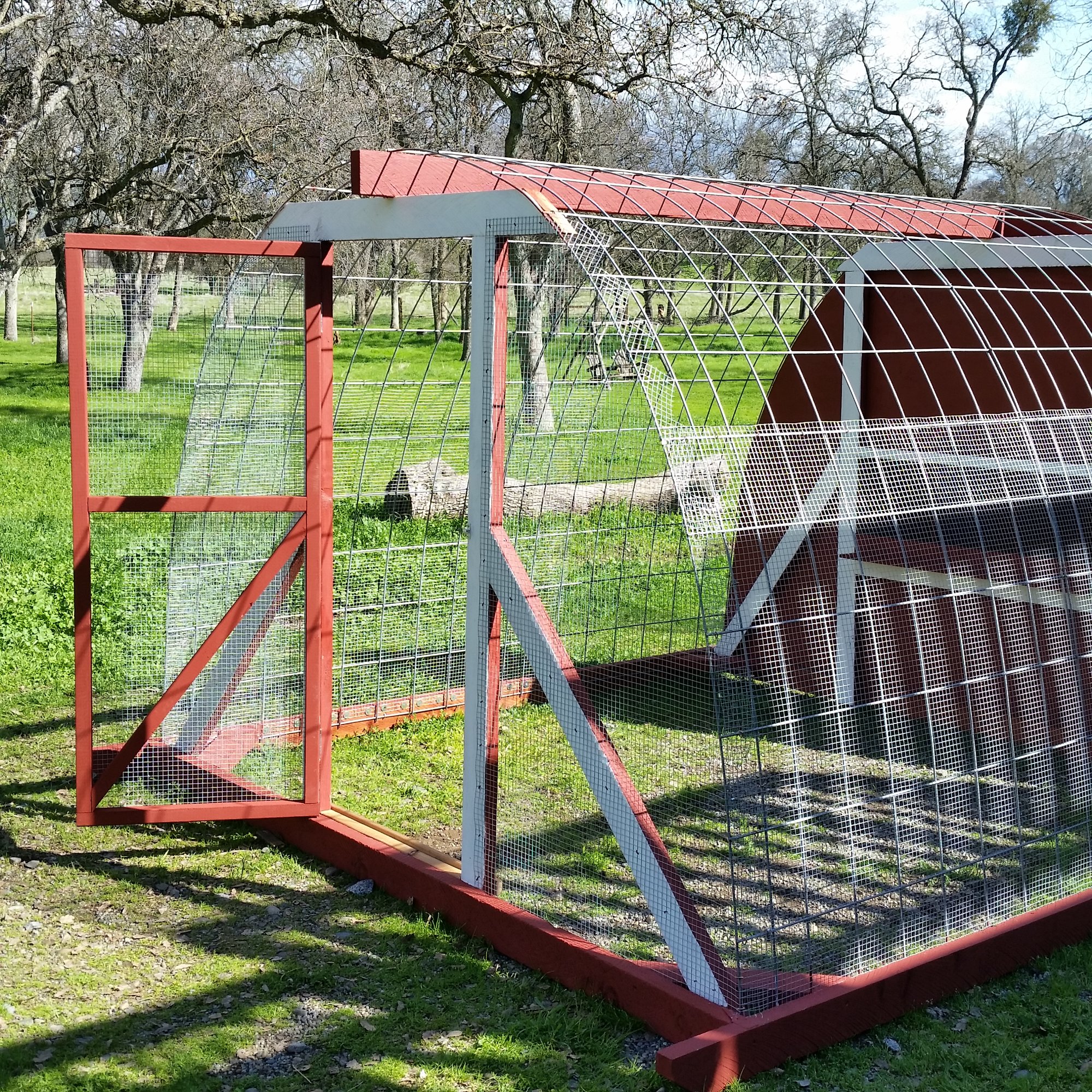 I cut a small section of hardware cloth to cover the opening at the top front of the coop, folding over the excess and securing with small U-shaped staples and hog rings. Then we began attaching our corrugated panels. These were cut with a Sawzall from salvaged pieces we had on hand. They have existing holes and other imperfections, oh well it adds to the charm! We attached them to the cattle panels with back strips made from 1x2's and metal roofing screws, the kind with rubber washers. Aka tuftex screws. 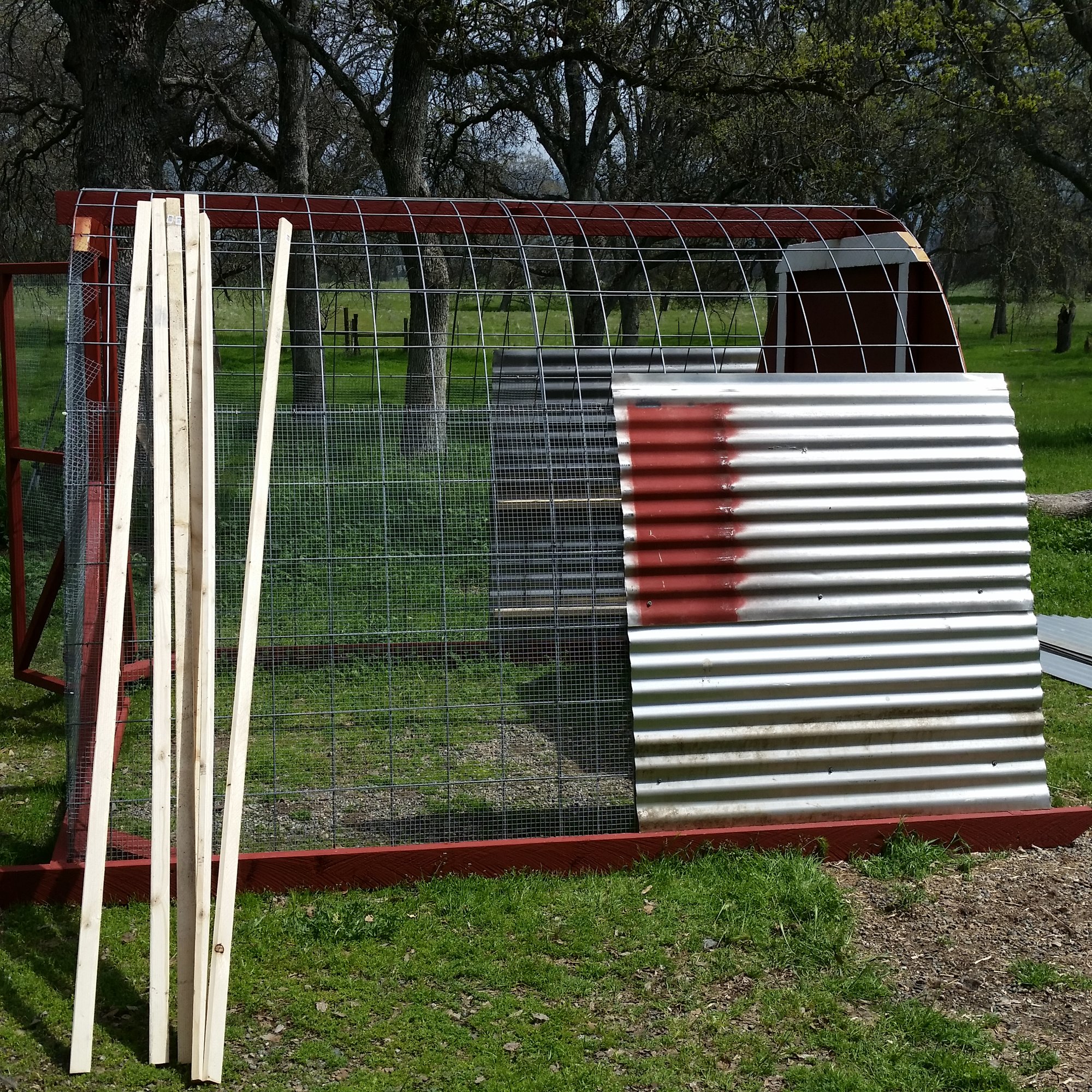 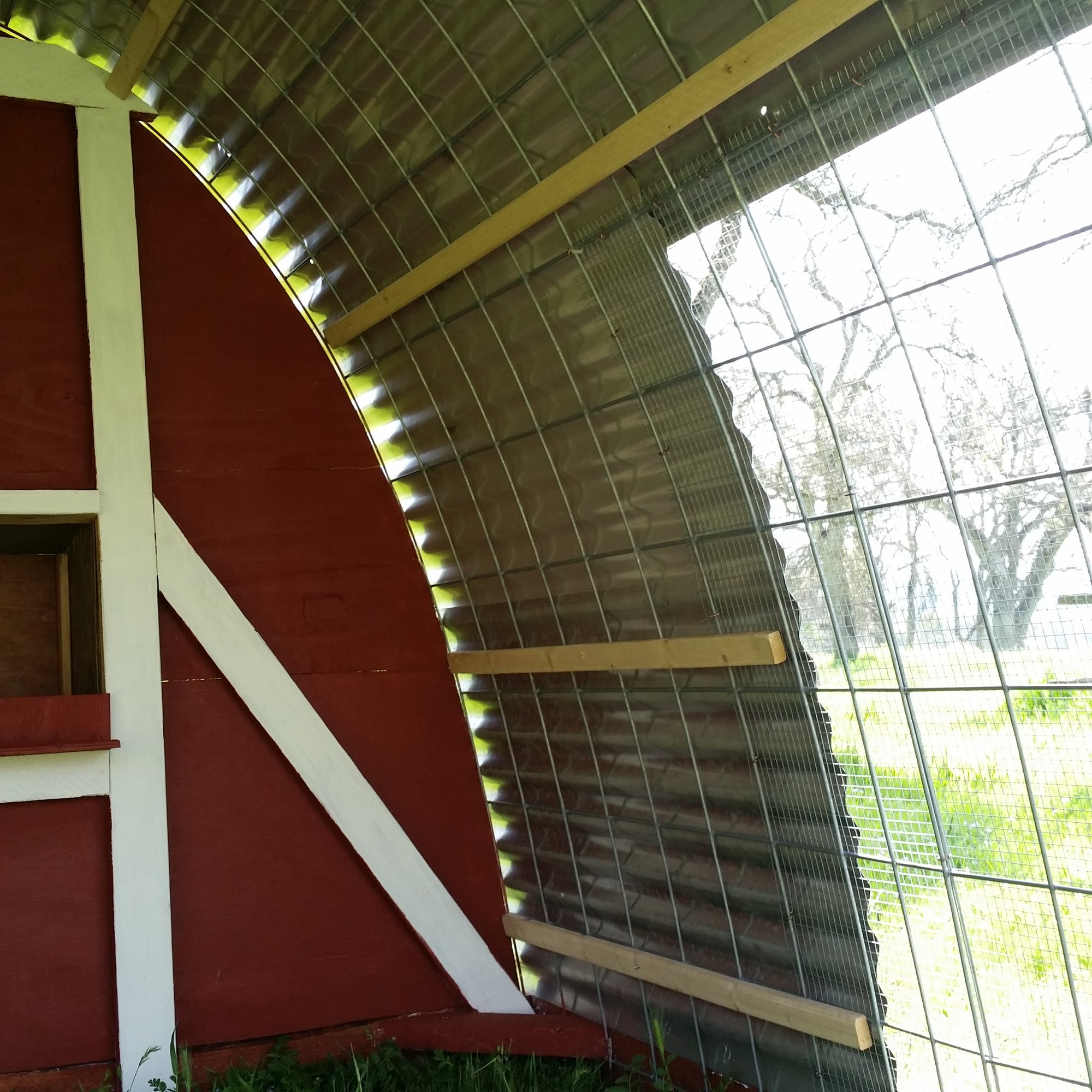 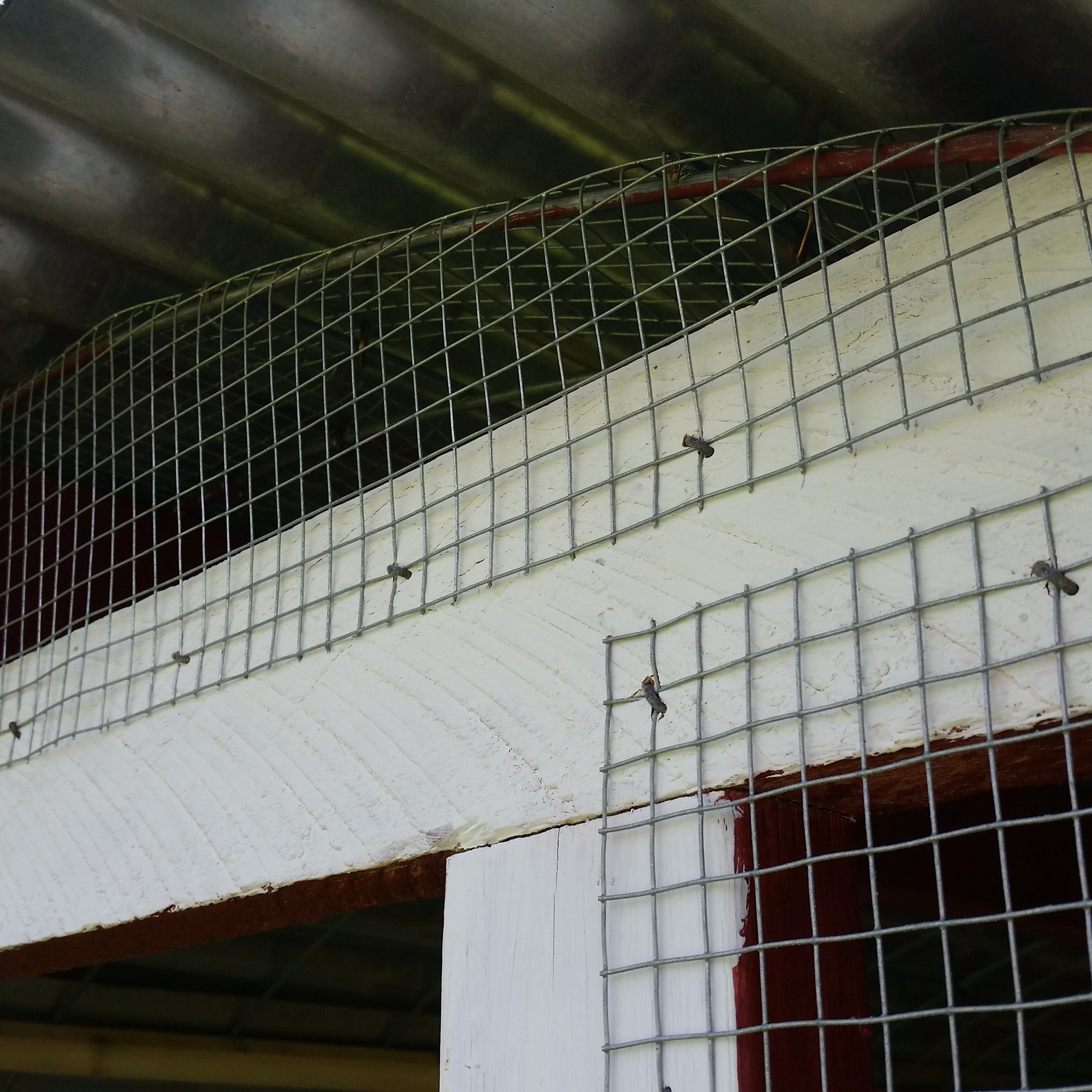 As a finishing detail we put in some 1/4 round molding around the rear and side edges to seal gaps and hold the bottom edges of the corrugated panels securely in place. We painted it before attaching with brad nails. We added large eye bolts to all four ends of the skids for attaching chain or rope. The coop ended up being too heavy to pull by hand but moves easily with a pickup. 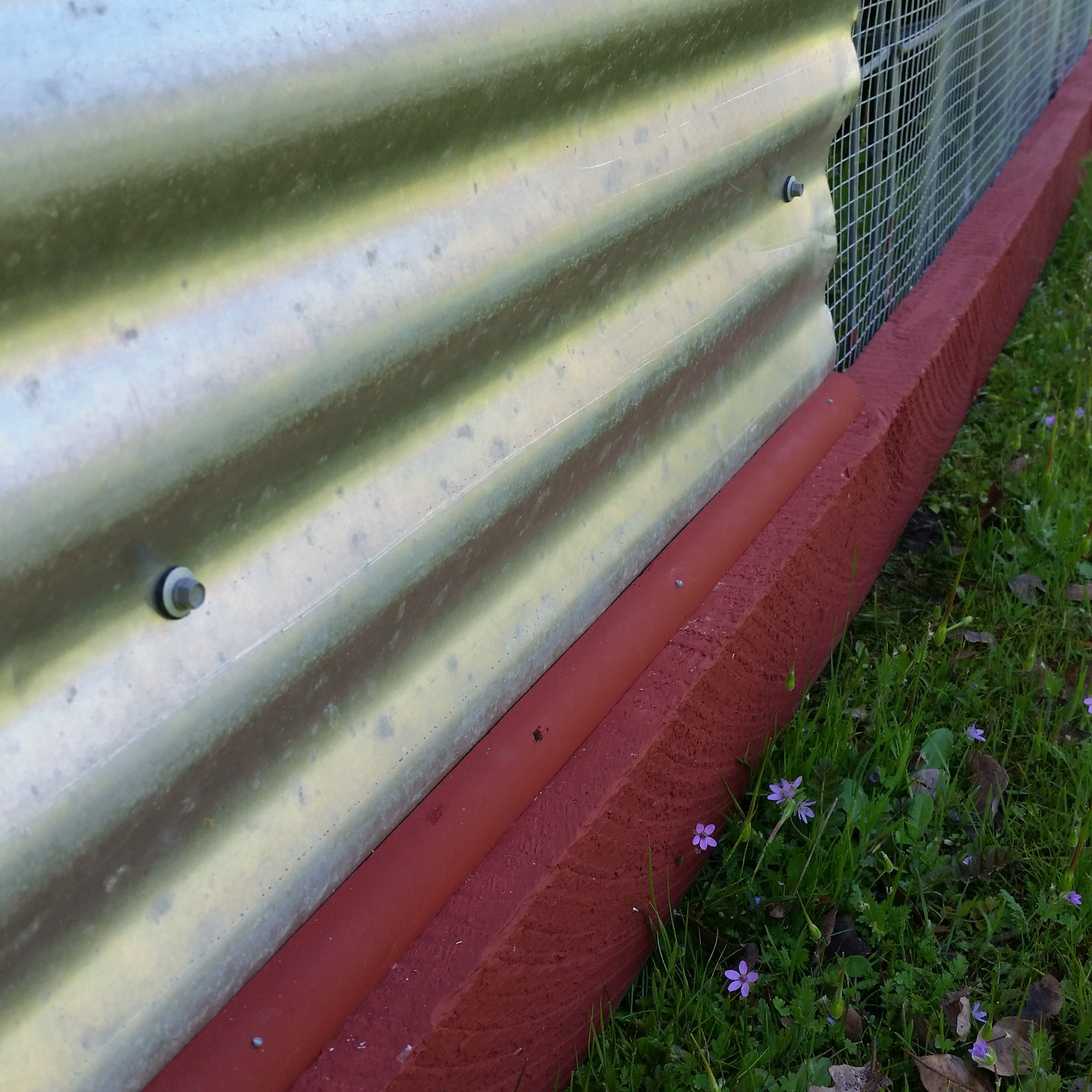 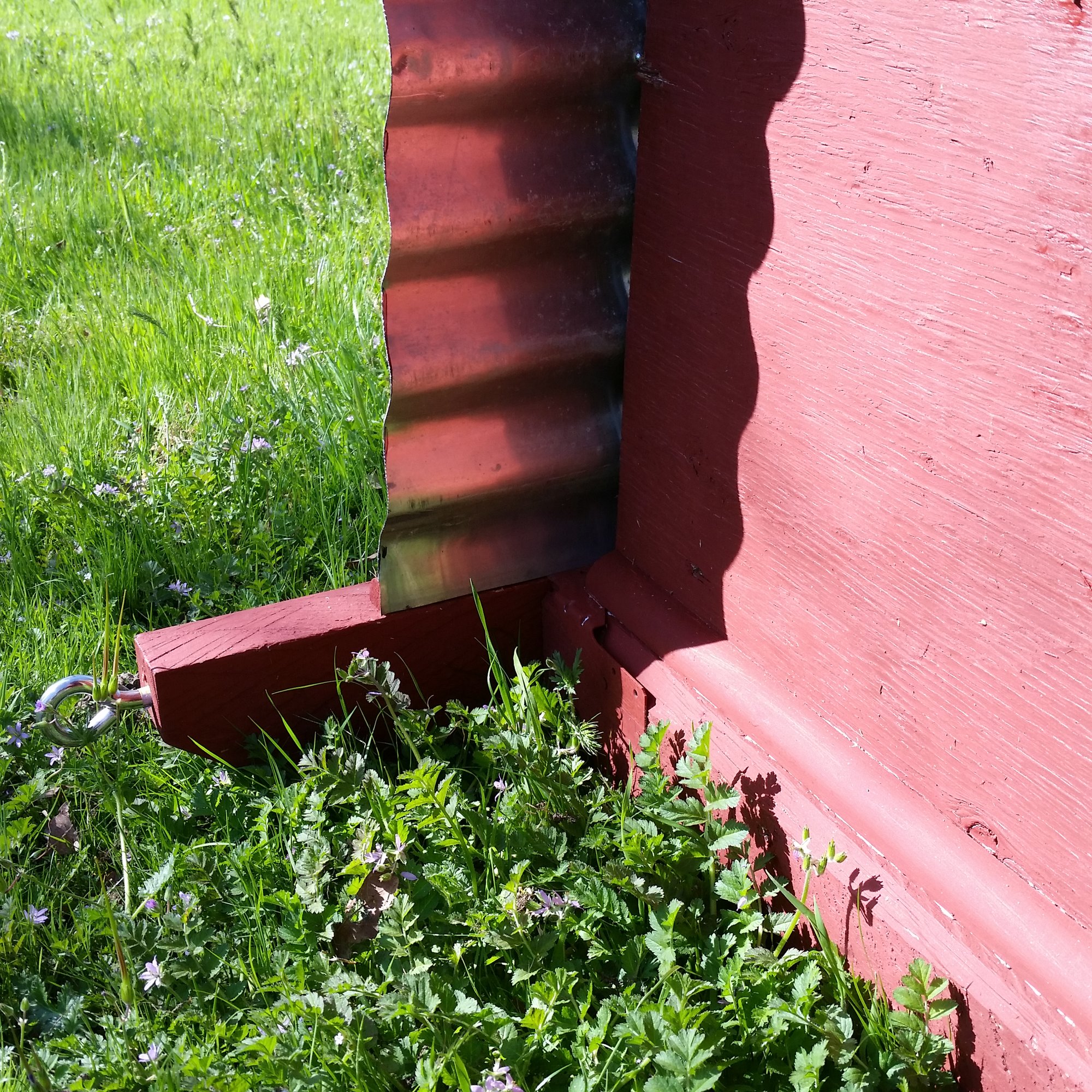 A few more finishing touches. Safety latches for the nest box. Rounded corners on the corrugated sheeting. Roosts, a feeder and a horseshoe for good luck. I made a horizontal nipple waterer with a 2 gallon reservoir. 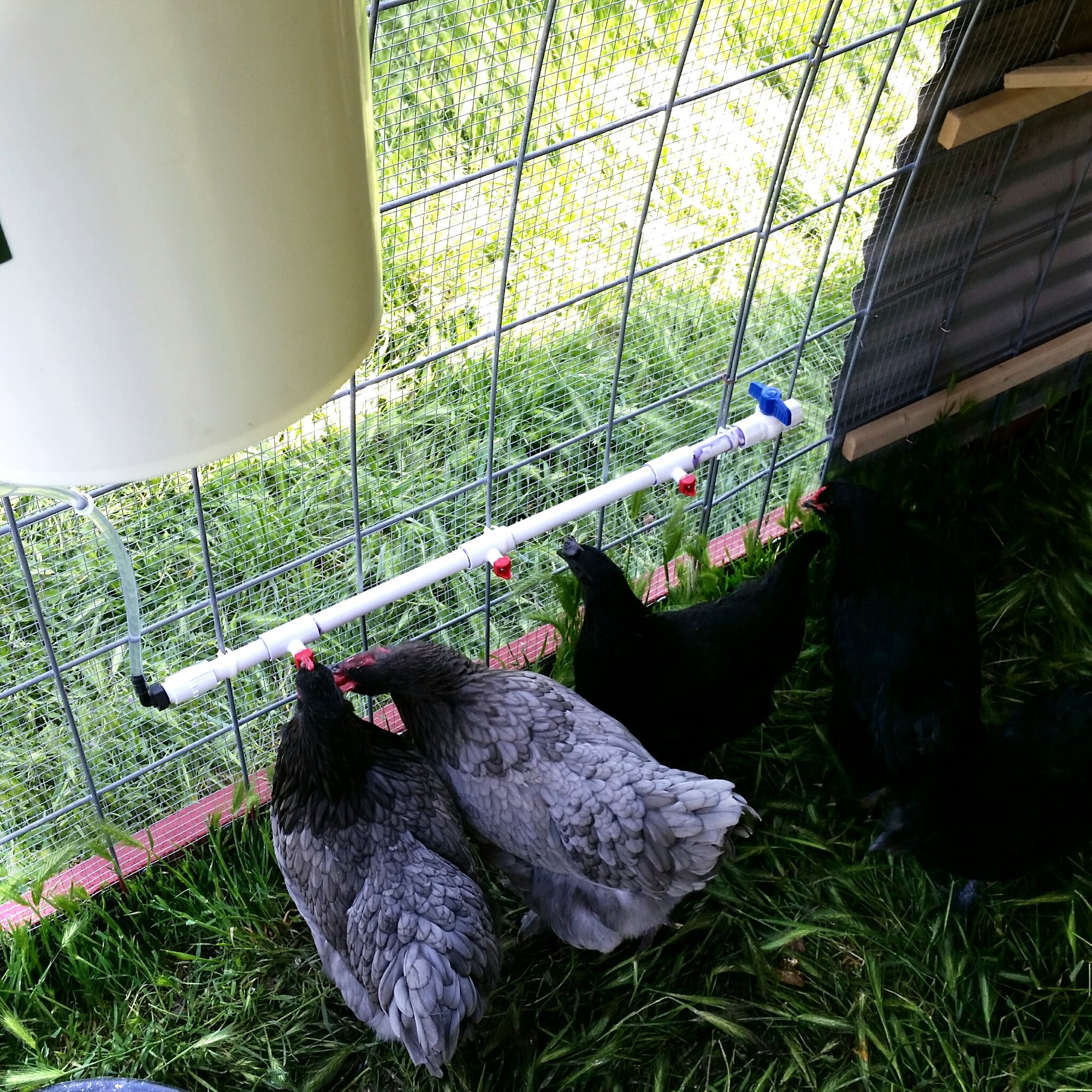 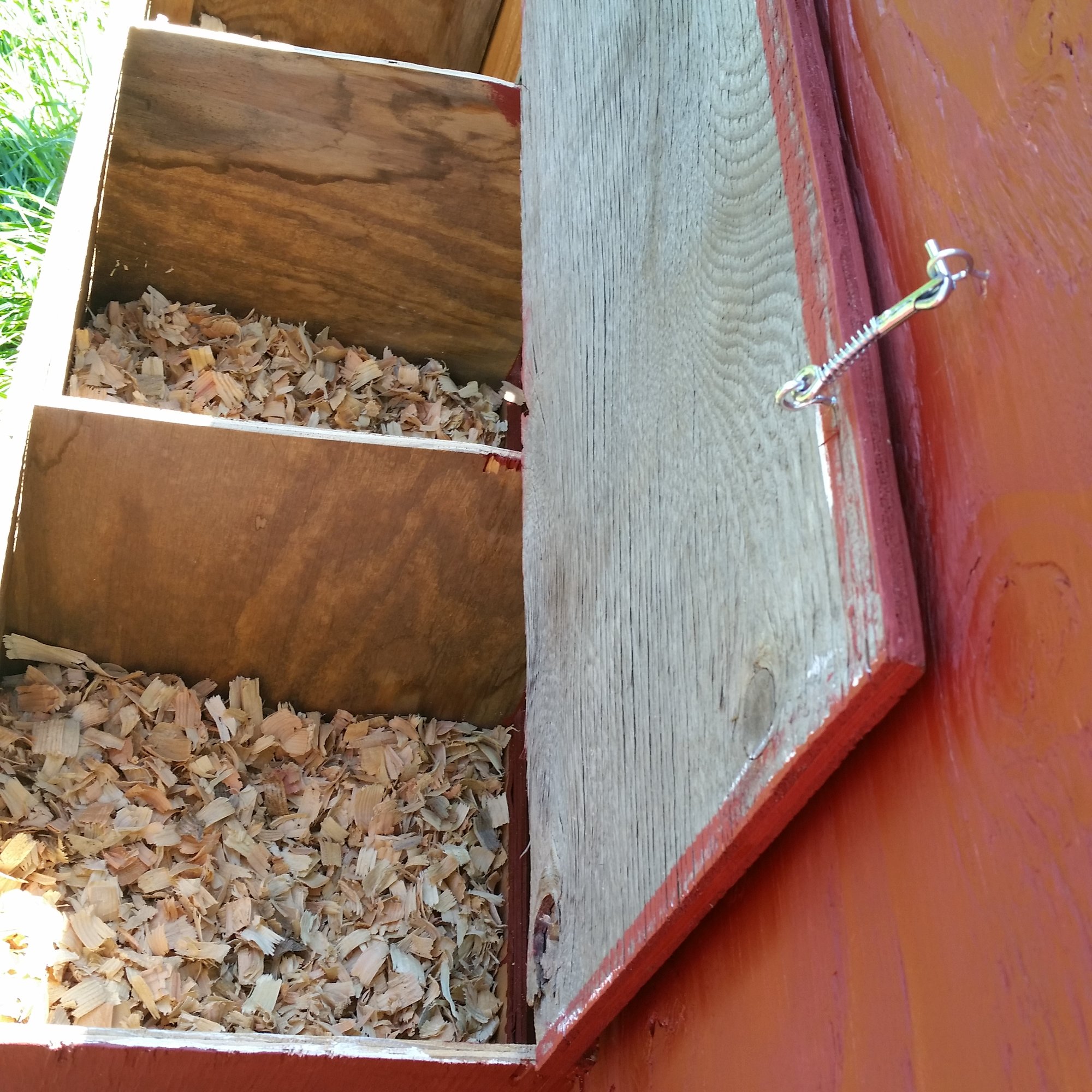 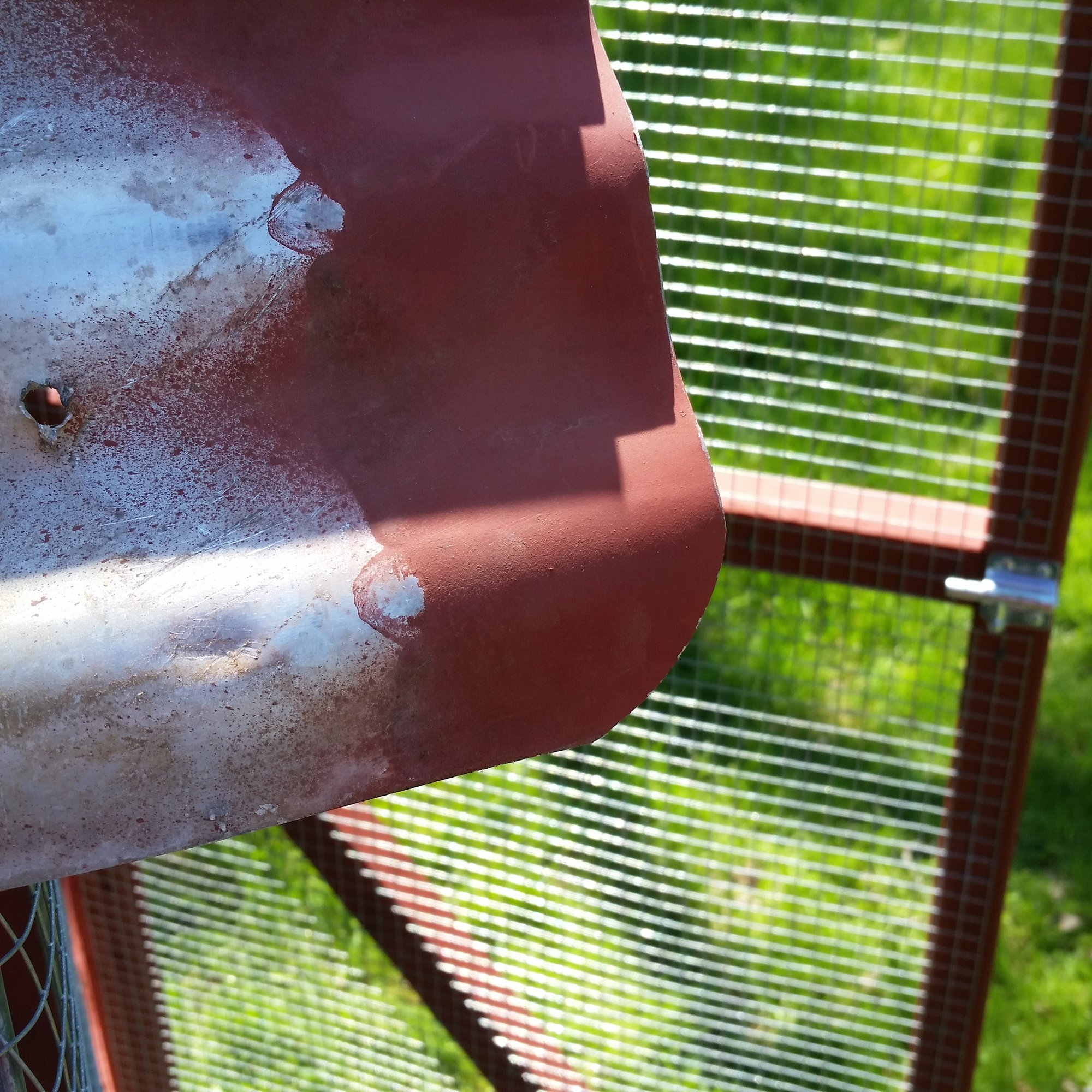 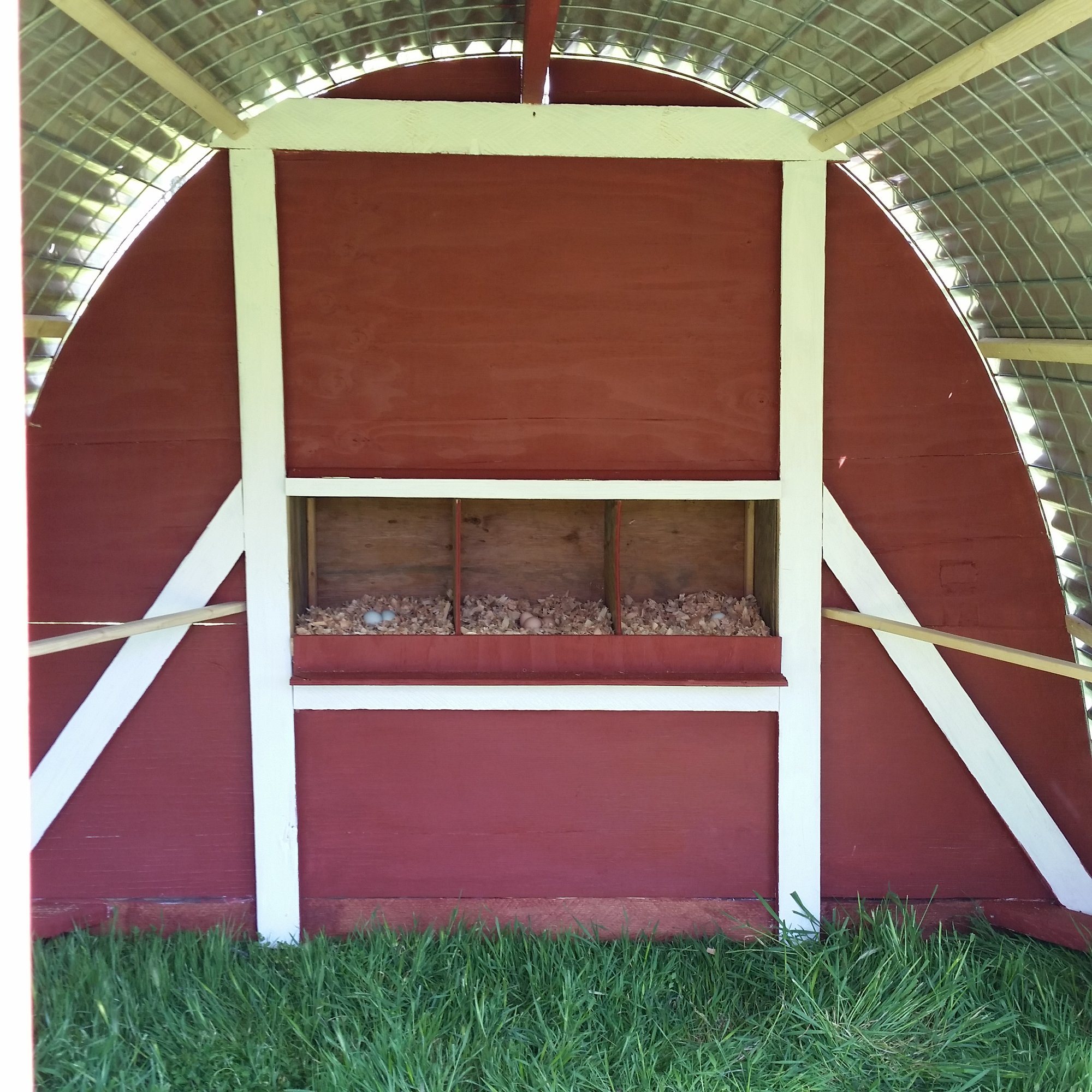 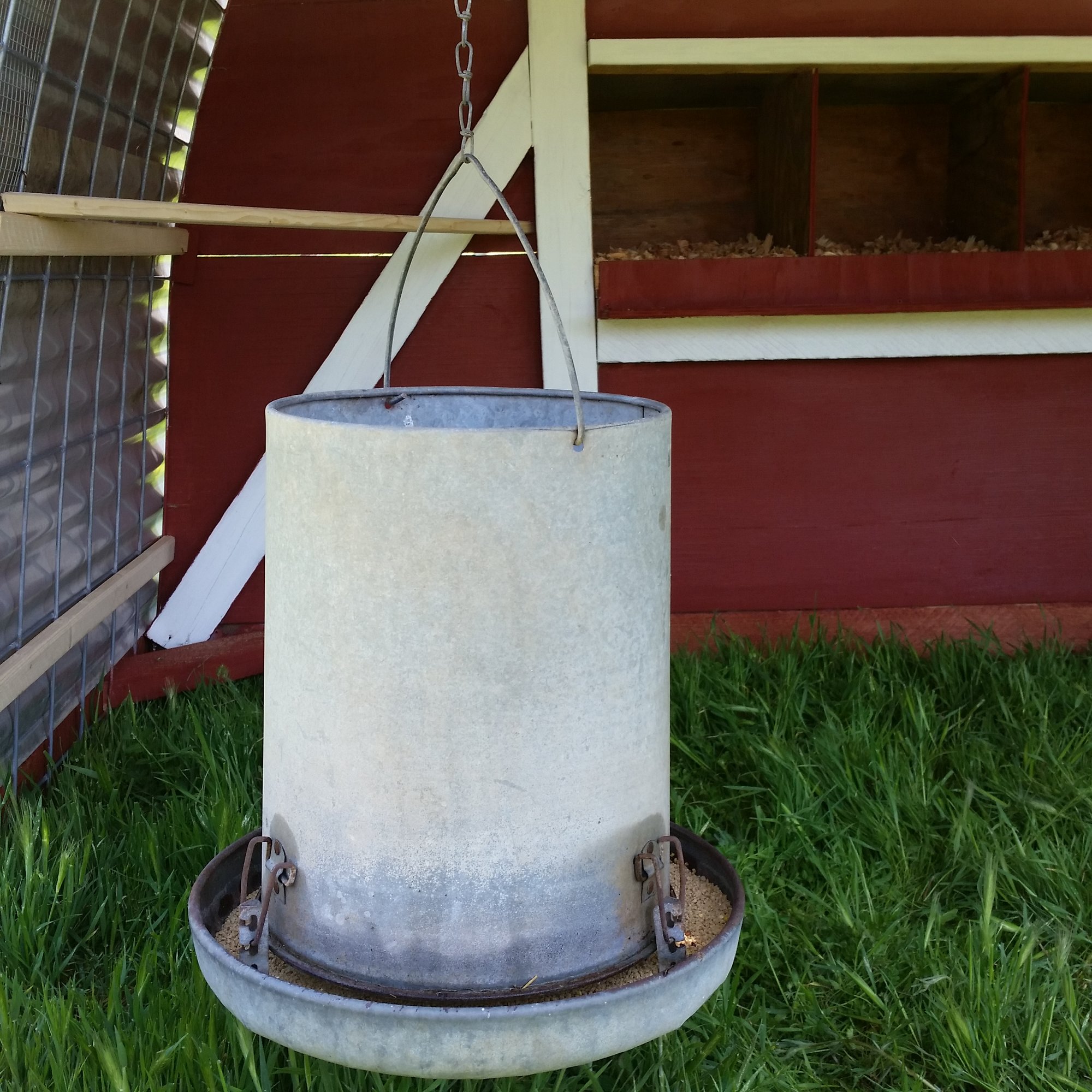 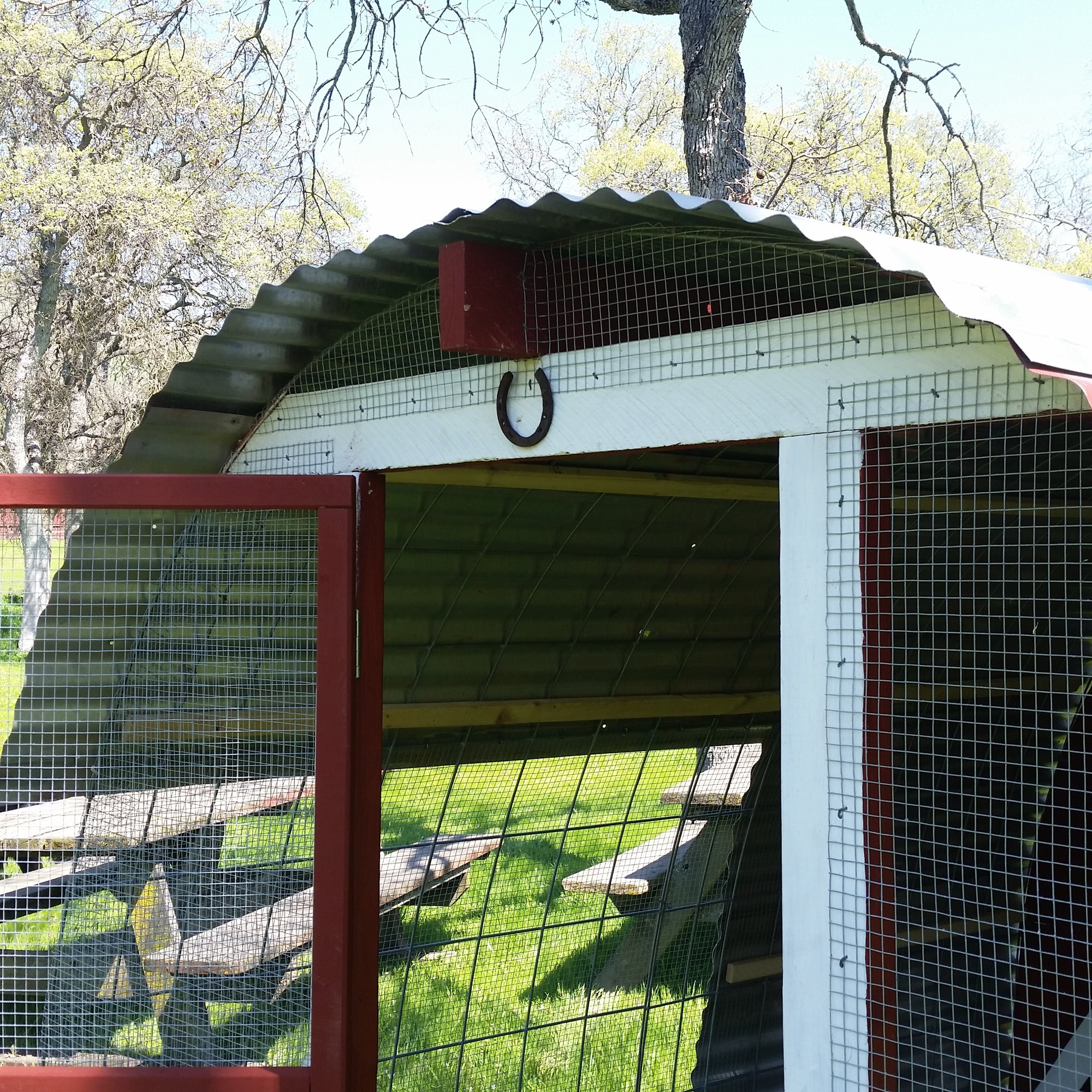 We still have some touch up painting to do and I'll be putting in a dust bath and a dispenser for oyster shell and grit. We're considering a wire skirt to prevent digging from outside.

Were we to do it again, I would choose a back opening nest box and extended the hardware cloth for the full length of the sides. This would have made it more secure against small predators, which could maybe squeeze under the corrugated metal sides. 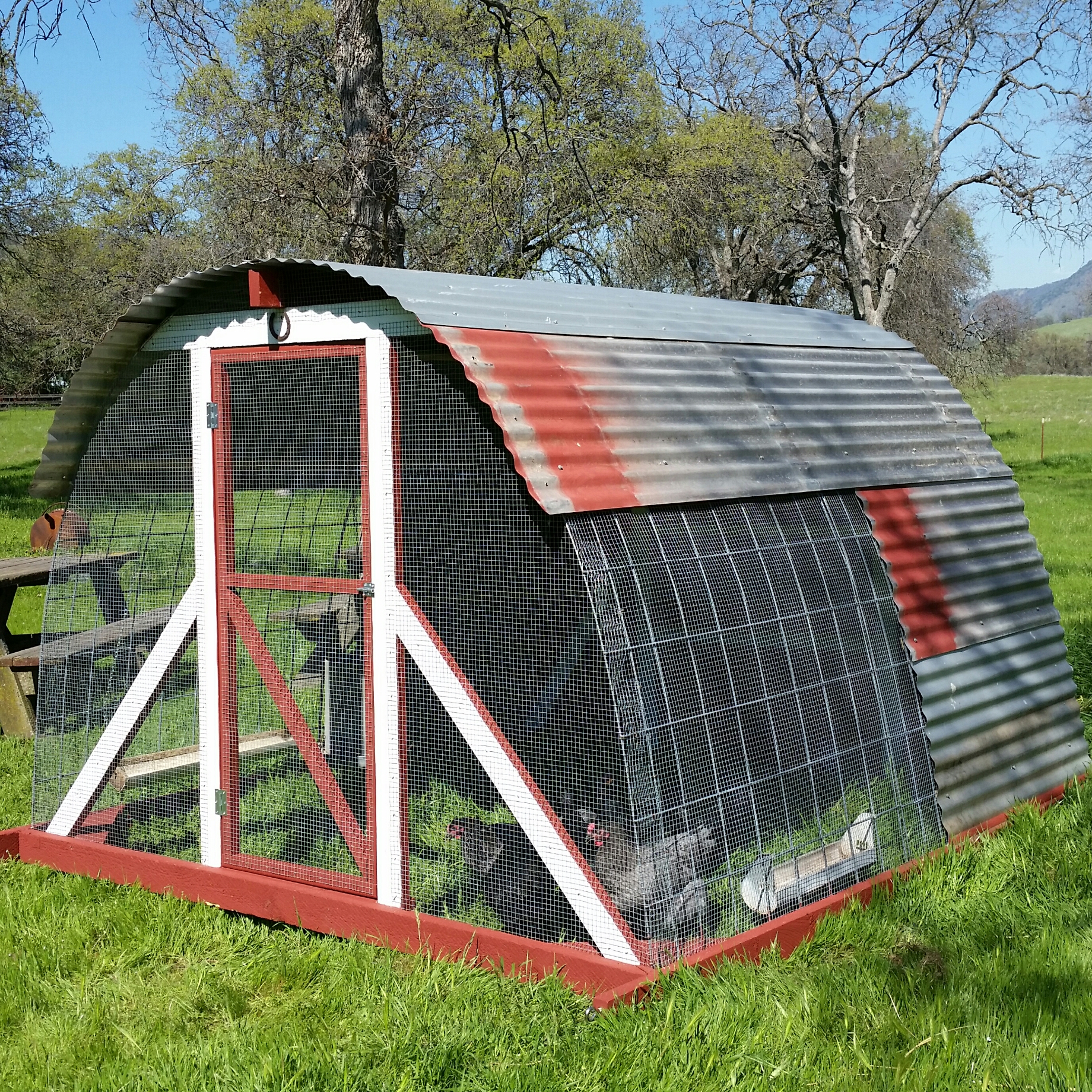 In this photo you can see the day pen we made with 7 ft plastic deer fencing. It is attached to 8' metal t-posts and can be moved with the coop. 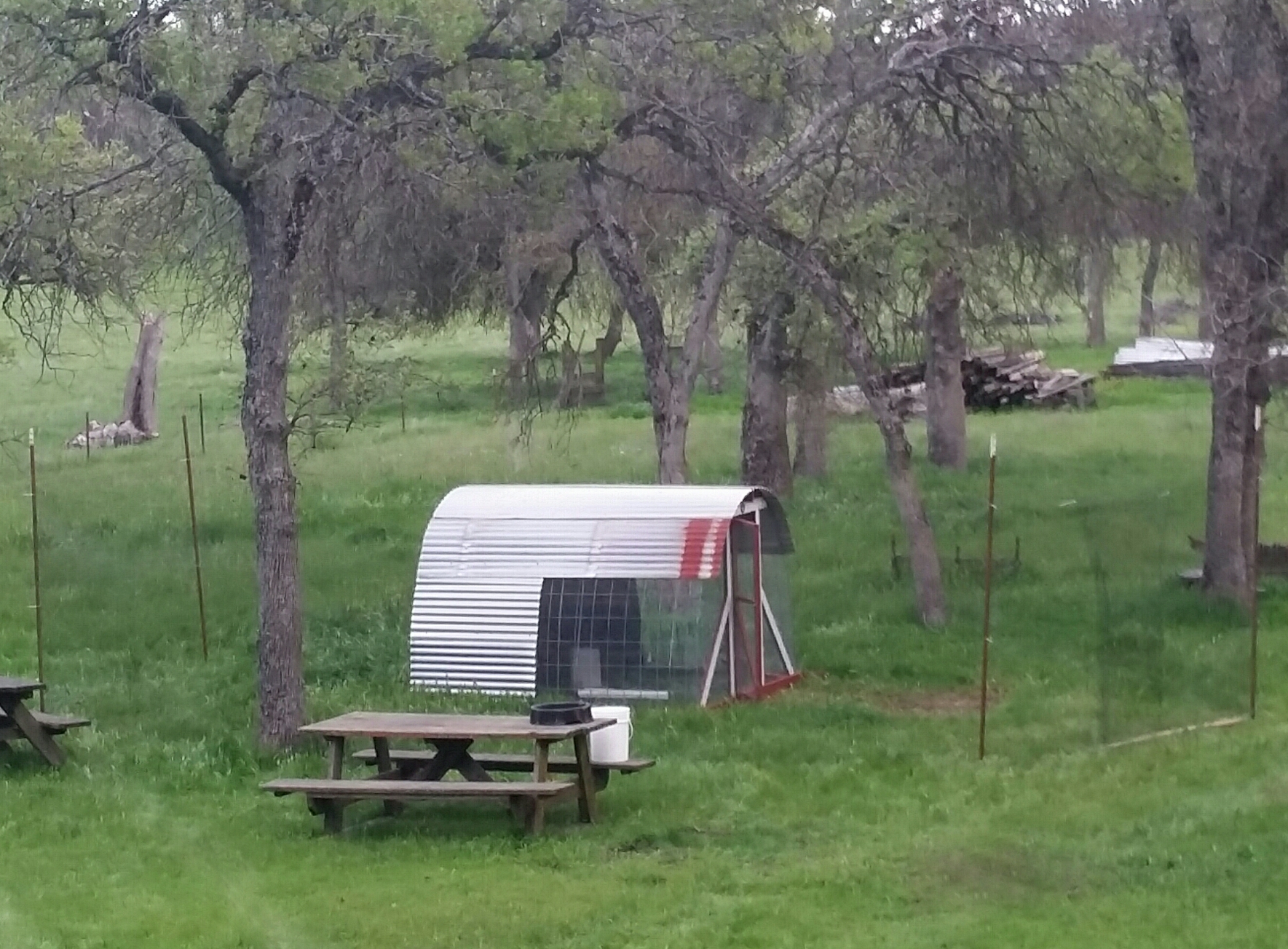 For a small flock this is great. Fresh green when the other gets low. Lots of bugs etc..
I think maybe making it another 50" roll longer would increase the feed area.
But its a choice. Good for a state that doesn't have a lot of cold climate.
Very well thought out. And as usual other ideas show after its built.

Thanks for sharing your coop build story!
Congratulations, we've chosen one of your pics for the CC-POW. Thanks for posting your coop design & pictures to our "Chicken Coops" pages! You can find more info about the CC-POW here: CC-POW Process
Awesome, it looks like it was fun and I know the chickens like it.
Always love seeing new ways to build hoop coops. Looks awesome and thanks for sharing.
Very nice! Will be using some of these ideas for waterfowl coop soon to be built. Love the curved roof. Especially needed here with all the snow we get. We have to do the 1/2" hardware cloth as well or juvenile opossum get right through that 2" x 4" welded wire openings. Thank You for Sharing!
Excellent build. How many chickens do you have and where do they roost at night?
Great job! Looks very secure and safe. I love it!
Well done!!

Thank you! Right now just 6 in this coop and there are roost bars on either side of the nest boxes. I may replace them with a ladder style roost.

Ok, I see them now. Do some sleep in the nest boxes? A horizontal roost above the nest box would make them want to be up there to roost. I love how you re-purposed materials like the roofing.

Repurposing is the best! Yes, they tried sleeping in the nest boxes the first night but I moved them and they haven't done it again. I'm keeping an eye on them and may add a high one like you described.

That's very kind of you!

Eggscoozme said:
Very nice! Will be using some of these ideas for waterfowl coop soon to be built. Love the curved roof. Especially needed here with all the snow we get. We have to do the 1/2" hardware cloth as well or juvenile opossum get right through that 2" x 4" welded wire openings. Thank You for Sharing!
Click to expand...

Thank you! I hope you'll post photos when you're done.

Thank you! I love seeing different hoop coops too. They're really fun to customize.

Thank you, they really do!

sumi said:
Congratulations, we've chosen one of your pics for the CC-POW. Thanks for posting your coop design & pictures to our "Chicken Coops" pages! You can find more info about the CC-POW here: CC-POW Process
Click to expand...

Thank you, I appreciate it!

You're welcome! Thank you for reading it.
This is amazing! We inherited a hoop structure (solid sides used as a shed currently) that is very similar in construction ... I think we could repurpose using some of your ideas. Can’t wait to give it a shot - Your post is such an inspiration!

littlecollier said:
This is amazing! We inherited a hoop structure (solid sides used as a shed currently) that is very similar in construction ... I think we could repurpose using some of your ideas. Can’t wait to give it a shot - Your post is such an inspiration!

That is so sweet! Good luck with your coop