Article Gallery
Leave a rating
Here is my Flock!
I own 5 birds total in a suburban neighborhood. I made each one a little profile in order of aquisition
Baby Album
Sweet Digs (the coop) ​

Dolly
Inspired by Dolly Parton with that blond hair and big chest, Dolly is a buff laced crested polish pullet. She has taken over as rooster after we had to give up Sam. She is a lookout and is always the first one out of the coop and the last one in. She likes to squeal and run fast with her head down like a roadrunner. (the blond, front and center)
Favorite Activity: Watching the sky for hawks, scratching in leaf piles
Favorite snack: frozen strawberries, cracked corn, romaine lettuce hearts
Birthday: 5/5/2008 from My Pet Chicken hatchery 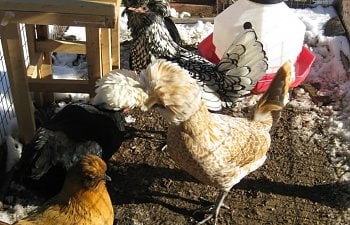 ​
Petra
Petra is a silver laced crested polish. This is the name she goes by most often, but has been called Indy, and Petulia as well. Not sure why we could never agree on a name for her. She has the prettiest feathers of the bunch and a floppy headdress. She is a follower, and runs after Dolly or I where ever we go, including in the house.
Favorite Activity: Jumping high to reach the blueberry bushes
Favorite snack: Fresh blueberries, yogurt, and popsicles if you aren't careful.
Birthday: 5/5/2008 from MPC 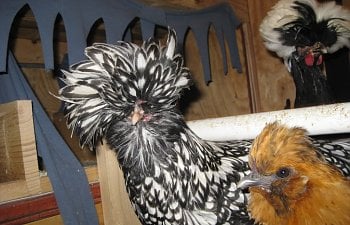 ​
Ophelia
Ophelia is a white crested black Polish. Her crest is so volumous that she can't quite see (we do trim it once and a while, or use a headband) so she is easy to sneak up on and hold. We all baby her because she bonks into things occasionally and its very pathetically cute. She is the proud survivor of an attack by a juvenile red tail hawk her first winter. Her feathers are all grown back but she's a little wary about being grabbed now.
Favorite Activity: high stepping through the garden
Favorite snack: Avocados all day long, oatmeal
Birthday: 5/5/2008 from MPC 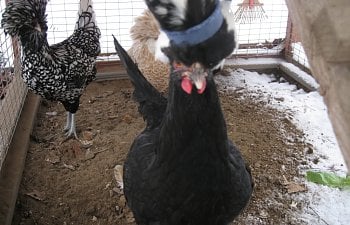 Beverly is our pretty little mutt! She is half black silkie and golden colored random bantam. I adopted her from the farm I work at because they were running out of room. She is SO sweet. She is special to us because of her little feather feet, crest, and poofy cheeks, and also five toes! She is my softest chicken. We think she will make an excellent mom (that Silkie broodiness) and may try hatching eggs under her at some point.
Favorite Activity: digging really, really, really big holes in the lawn, rounding up eggs
Favorite snack: Sunflower seeds, oatmeal, yogurt
Birthday: 4/5/2008 from Drumlin Farm 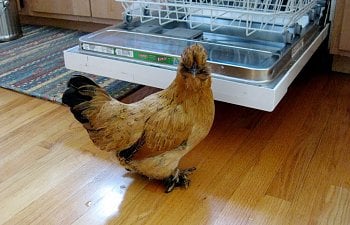 ​
Angie (Angelina)
This is Angelina. She is a black rosecomb bantam from Drumlin Farm. She is like a little black sports car. She is also very sweet and is very good at flying and attacking bugs. Even though she is a bantam, she has layed one egg per day except when she molted. Angie is Beverly's best pal and they hang around together.
Favorite Activity: Sunbathing on her back with her wings out, dust bathing
Favorite snack: blueberries, sunflower seeds
Birthday: 4/5/2008 from Drumlin Farm 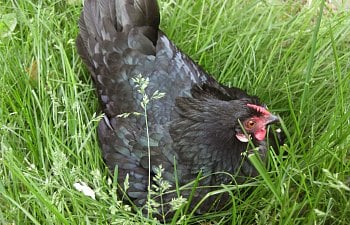 Georgie was a packing peanut sent in the 5/5 MPC order. He is a Blue Andalusian rooster and was SO beautiful. Alas, he was also a surprise rooster. He had to be given away because he began crowing before Sam and our town does not allow roosters. He also would fight with Sam and the Girls. I miss his spunkyness. He now lives with a nice guy who was starting his own flock.​
*Sam (Sargeant Yosemite Sam)
Sam was the most beautiful rooster in the world. He had to go due to crowing, and I hope he found a good home from the animal shelter he was given to. I miss him lots