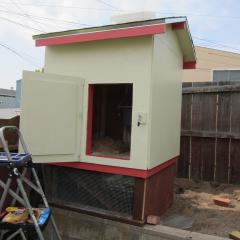 I embarked on raising chickens for eggs after having a conversation with a fellow Master Composter who raises chickens.
Well, as my wife said, I should have built the coop first. After 12-13 weeks, my Amercauna, Rhode Island and Delware were ready to get out of the pallet brooder that I built.
Quick Links
External Nesting Box - Wife calls it a drive through
Water nipple system, if you can call it a system
Chicken Behaviors. You have got to see this, it's funny.

The Design
Design Challenges
What's left to do
Advice The coop has about 22" underneath. This area will serve as a secure external area where the chickens can get a dust bath and just hang loose.
Not very sexy, but it will work. I used hardward cloth and a pneumatic crown nailer (it was faster), but I think that a large washer along screw would be just as good if not better. This side is where the door will be installed. A bit overkill on the studs, huh? I had to keep reminding myselft that chickens are living in this building, not people. ok. So the paint doesn't match with the stained bottom pieces. Oh well.
Today, May 22, 2011, I installed a temporary wall, see the stained painted plywood in the run area?
I will work on extending the run another 3-4 feet.
My wife will be happy that the chickens are now in the home, outside. She said, my chickens were smelling up the house.
My wife was very patient.
I will post more pictures after I have complete the final tasks.
I hope you enjoyed my coop.

As of May 25, 2011
My coop is still a work in progress. Again, trying to keep the floor clear of any items in order to provide more space for the chickens, I installed a rabbit feeder on the door. At this time, it is temporary, but it works.
I used a rabbit feeder and a one gallon plastic jug to hold the feed. I am guessing that the feed supply will last at least two days.

As of June 4, 2011
As I compost the chicken poops, I thought rather than letting the poop go to in the area under the coop, I decided on putting compost in the bottom area.
I will turn the compost once per week and when I feel it is good enough, I will transfer it to my composting bins to finish it off. Anyhow, the next morning (July 24), one of my hens laid her first egg.. Yippee!. I ended up getting two eggs that day. Check out my first egg page.

September 5, 2011 - My Wife Calls it a Drive Through
I decided to install a nesting box that protrudes from the coop as my three chickens are big and my 4x4 coop is too small.
I also moved the perch as the hens were squished on the 22" inch perch. I installed a 27" round perch.

The Drive Through Nesting Box.


The New Round Perch

Nice coop build page!
There doesn't seem to be any ventilation other than the hatch door. Do the hens free range? Otherwise the space is barely big enough for 3 chickens... However, construction looks solid.
Two things that I would improve in this coop are space and ventilation. The design is pretty good overall and I really like the idea of using compost for bedding material.
Read more…

I like your compost arrangement. Can you provide more info on it. Where is it located? On the floor of the coop, or outside under the coop? Did you do the "cleaning" by shoveling the poop on to the compost pile? More detail will be helpful. I really like the concept, but am not clear on how you manage it.
Also, can you provide more info on the solar LED lighting arrangement you have there? My coop is going to be located so far from electrical source your arrangement sounds ideal. What kind of "light bulbs" did you have inside of the coop? How was it arranged? And are you satisfied with its performance? I'd like to set that up as my coop will not have a skylight, so it will be dark inside.. Am going to cut a hole for ventilation and cover it with 1/2" hardwire cloth.
Thanks for sharing your build experience!