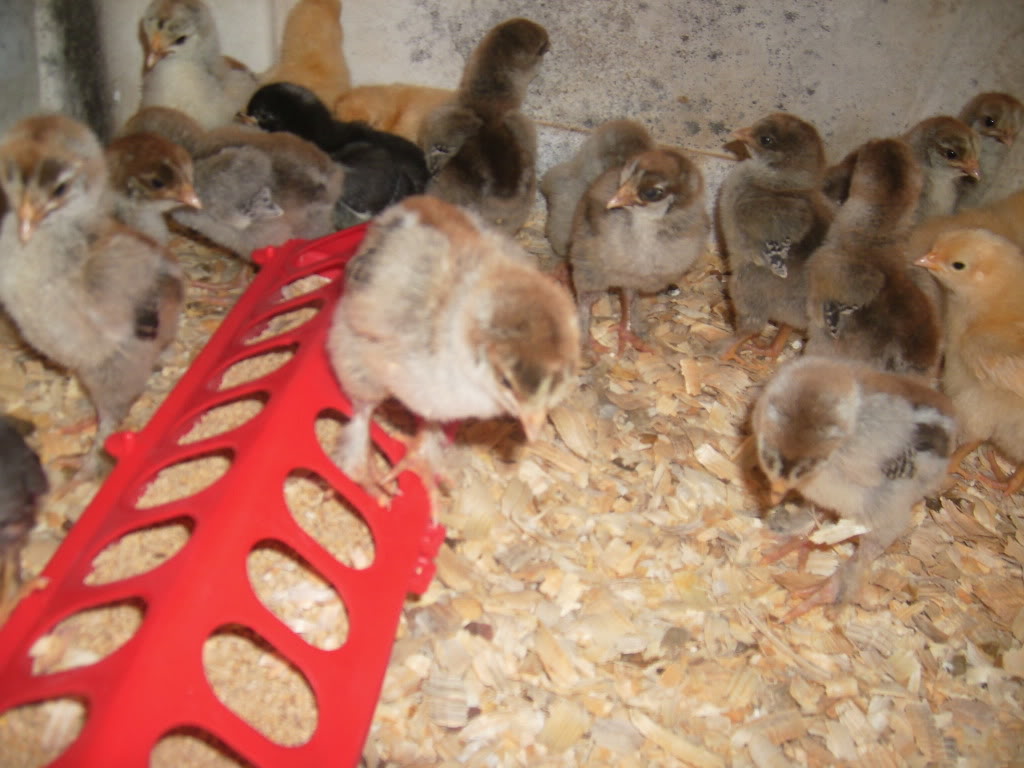 hi everyone from Baton Rouge, LA (well just outside anyways). I recently moved from my apartment in the city, to a house in the country with 6 acres of land! Besides my 2 dogs, and 4 fish, i dont have any other pets. Some people at my work started talking about chickens, and with one search from my phone for "raising chickens" it all started. Once I found Backyard Chickens I was instantly addicted! Anyways on Feb. 17th at 7:20AM (i was angry from the phone call, but perked up when i realized it was because my chicks had arrived!). I ordered mine from Ideal Poultry, a link that i found on BYC, they were close (one state over), and it was an easy transaction with out any problems. So here I was on my way to the local post office to pick up my 6 Buff Orpingtons & 3 Barred Hollands (as well as 14 Dark Brahama roo's that the hatchery threw in for warmth... YIKES!).

here they are exploring their new home on day 3, you can get an idea of how many roosters their are! they are the little chipmunk looking ones with the furry feet 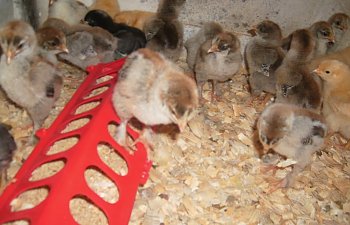 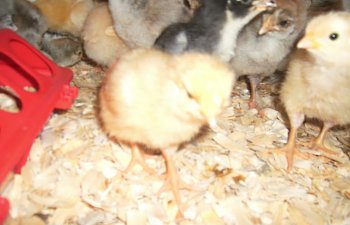 and the Barred Holland hens 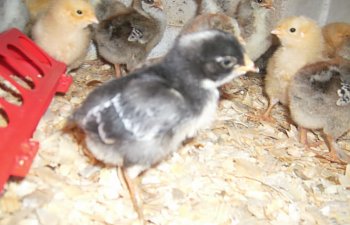 And the Dark Brahama Roosters 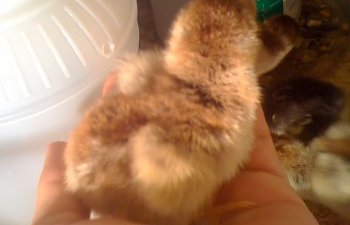 *if you notice, I made homade feeders and waterers using gallon sized plastic mayo containers, and plant pot bases that I purchased from Wal-Mart for 75 cents each... but the problem came into play because they constantly scratch at their feed... so I went ahead and bought a flip-top feeder, and a quart sized waterer, they were a lot cheaper than I thought, 4 dollars for the feeder, and 3 dollars for the waterer from a local feed store.

then it was time to build them a home, i had already started building it by time they arrived, but it took a few weeks to get it to look like this, if you want to know how i built it, you can click on the "Coop and Run" page at the top 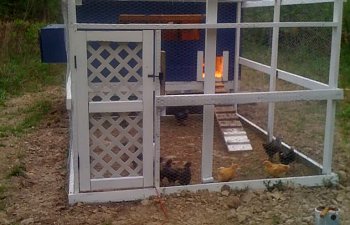 I had no idea that my chickens would grow up so fast! Notice the little tips of feathers coming in on the wings. 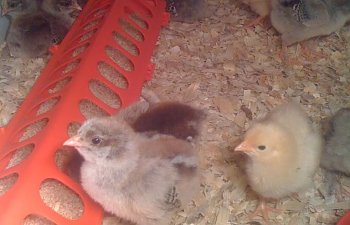 After about a week and a half, it was time for their first trip outside, and they loved it! They were jumping in the air and flapping their wings, it was so funny! 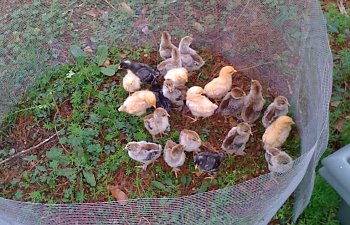 at 2 weeks, I made a small roost, using sticks, in a simple A frame for them to play on while they were still in the brooder... they loved it, and were all over it after a few days! 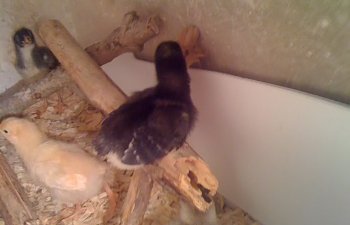 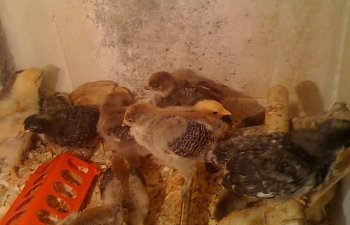 My your a big boy! 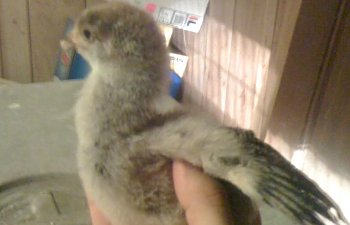 Your so big, that I think its time for me to move you outisde! At three weeks they were way too big for the brooder, I was using an extra large Dog Crate, but with 23 birds, you need a little more room. 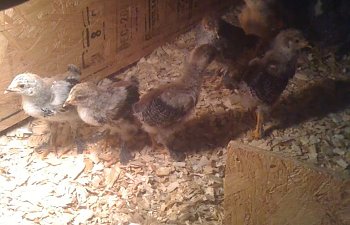 I kept them inside the coop for the next few weeks. It was only around 50 degrees at night here in south Louisiana, so there wasnt much to worry about, but i still wanted to wait until they were completely feathered. The Hens matured a lot faster than the roosters, but after they reached 6 weeks, it was time for their first trip out the coop into the newly finished run! They waited by the door for a little while, but after a few minutes they came out to see the world. The roosters are the brave little guys, so they came out first to inspect their new surroundings. 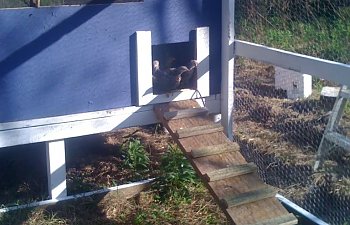 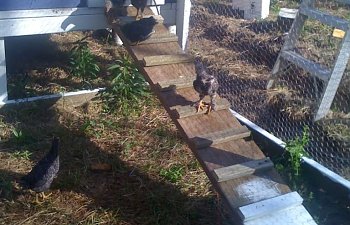 a bad little roo! he was picking on my hens, so I walked around with him for a while. I guess like a time out! lol 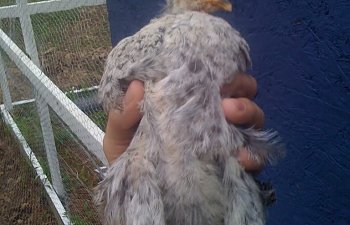 They were quickly drinking their water and eating their feed by this point. I was refilling food twice a day, and water 4 or more times. It was time for a new feeder and waterer. I went to Tractor Supply for the first time, their prices were really reasonable, and my local feedstore only had metal ones that would hold more than a gallon of water. They were quick to explore this upgrade in food and water supply. 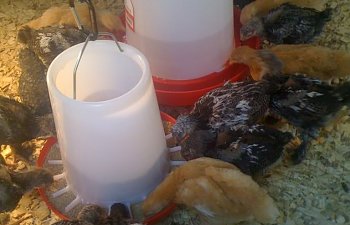 When I first got my chicks, I fell in love with my Buff Orpington girls, because of their little yellow fuzzy butts! But the Barred Holland Hens quickly became my favorites, its hard to belive that they are a rare breed, they are going to lay beautiful white eggs, and they are so sweet! 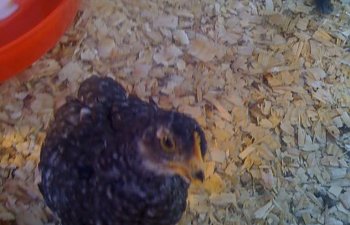 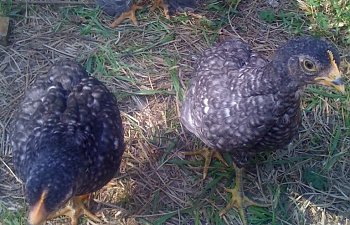 ATTACK OF THE 30 FOOT CHICKEN-A-SAUROUS-REX! not really, but they do look like little prehistoric chickens! 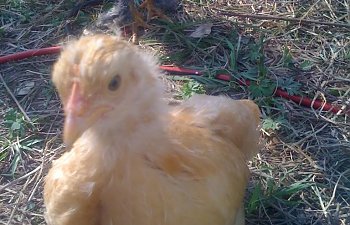 They go in and out, all day! I think they are happiest outside though, every morning they run and jump as soon as I open the coop door. They are always waiting for me. When I apporach the hen house, I start calling out to them and a roar of peeps errupts from the coop! They are always waiting to rush outside. Sometimes I feed them a few cheerio's for breakfast, and they love it! I handled them a lot as babys, so they don't have any bad traights, every once in a while i'll catch an angry roo picking on a hen, but nothing very serious. Here they are, just hanging out! 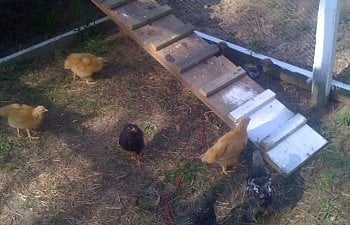 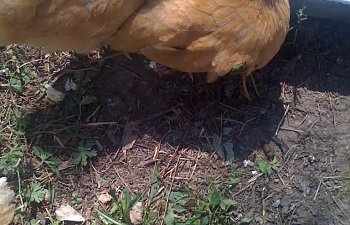 I pull a lawn chair into the run, just about everyday now, and hang out with my peeps. This was the first time, and guess who was the first to jump up onto my lap... thats right, a Barred Holland hen! They really are the freindliest out of all my birds. 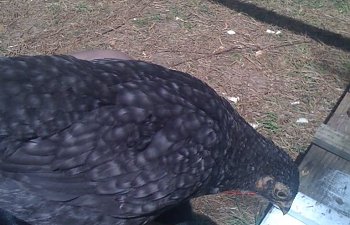 Im going to go out on a limb... and say these are my favorites! 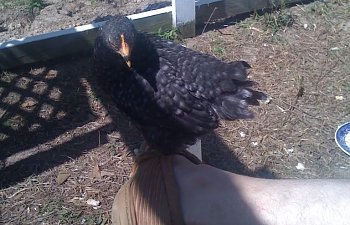 The first time I ever saw one of my chicks sun bathing... I kept thinking "what in the world is this guy doing!?" QUICK TO THE BYC FORUM for some research! lol 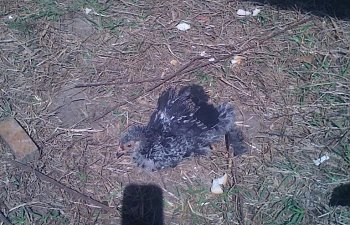 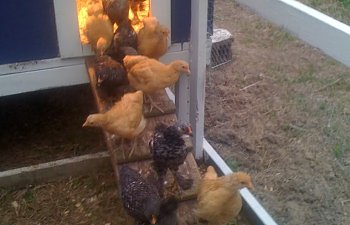 As much as they like to be outside, they always return inside when it gets dark. Simple enough, just go and slide in the door, and tuck them in. I was surprised it was that easy! One thing I did learn is that they will not go inside when it rains... I thought they would, but when the first rain storm came, they were all huddled in a ball, getting soaking wet! I quickly put them in the pen, maybe im just a worry wart, but they were easy to catch because they didnt want to leave the huddle.

OK SURE... everybody can get on my lap! The roo's even jump up their occasionally! 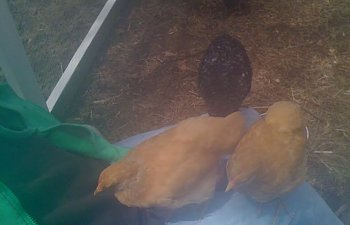 Everybody loves spaghetti! And if you notice the Dark Brahama in the front... looks a mighty lot like a HEN! And here I am calling you "little fella" it must have gotten on your nerves! IM SO SORRY! lol... They are now almost 2 months old, and they love their snacks! 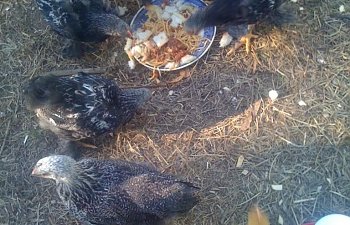 ​
They are now 2 months old, and I have separated all of the roosters, except for one lucky guy, to a "batchlor pad" 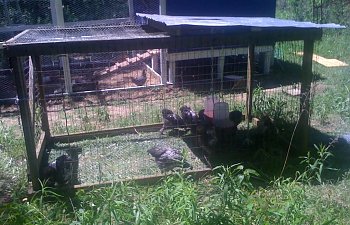 Every few mornings I give them some cereal. They love cheerios and capitain crunch. 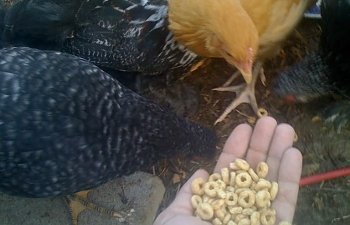