Owl - Chicken Predators - How To Protect Your Chickens From Owls 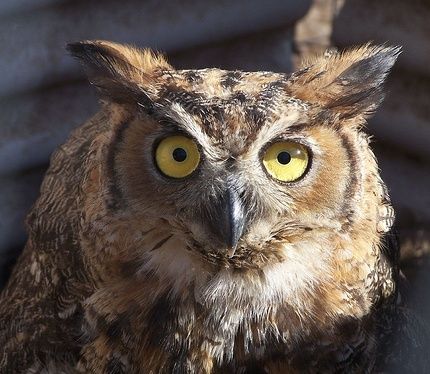 Owls are a group of predatory birds that belong in the order Strigiformes. Most owls are solitary and mostly nocturnal, with some exceptions, such as the Northern Hawk Owl. Owls have acute visual and hearing senses. Their eyes have a large retina that can create a spatial image even in darkness. Owls have asymmetrical ear placements which give them special hearing abilities for easier tracking of prey and they have the ability to swivel their heads over 270 degrees.

They are characterized by their small beaks, large eyes, and wide faces. There are between 220 and 225 extend species, divided into two families: the typical owls and the barn owls.

Owls are found in all regions of the Earth, except Antarctica, most of Greenland, and some remote islands. They prefer to hunt over open habitats and are typically found near places where sufficient prey, primarily rodents, and small mammals, thrive. Areas with open structures such as old or abandoned barns, sheds, and similar buildings are ideal nesting sites for barn owls, though they also make use of natural tree cavities or dense trees and brush. They may be attracted to barn owl nest boxes where natural nesting sites are unavailable.

Barn owls are found on every continent except Antarctica. The Arctic tundra of the northernmost parts of Alaska, Canada, and Eurasia is home to Snowy owls, who are attracted to open areas like coastal dunes and prairies. They have been reported as far south as the states of Texas, Georgia, and the American Gulf states.

This bird of prey employs similar hunting skills as hawks. Perched on a vantage point, such as a tree branch or fence post, they keep an eye out for possible prey and when the opportunity to hunt presents itself, they will swoop in silently and grab their unsuspecting prey with their sharp talons. Studies found them to be among the quietest birds when in flight, due to their serrated wing feathers. This keeps turbulence to a minimum and makes flight practically silent.

If you see dead birds in your area with surgical-looking cuts on their necks, you can be sure this was an owl’s doing. With a sharp beak and talons like those of hawks, falcons, and eagles, this predator can snap its prey dead with its beak right before swallowing the prey whole. It then regurgitates the indigestible parts like fur, feathers, scales, and bones. Owls have been known to snap chicken necks like scissors and feed on them. Unlike full-grown hens, chicks are excellent prey because they can easily cart them away with their talons.

Contrary to popular belief owls will also hunt during the day.

Owls are intelligent birds and they learn easily from observing your poultry farm. Things like keeping night lights on at night can be a short-term deterrent. But if they can get away with a few chicks as spoils, they will do so every day up until you are able to secure the chicken coop. It’s a good idea to spread out a bird net over your chicken run or yard to stop them swooping in on your flock. If the nets are made of meshed fishing lines, the owl won’t be able to see or get through when they swoop down with their outreached wings. You can also put in an electrical mesh fence. Others put visual deterrents like wind chimes, CDs, ribbons, or even strobe lights. You can also try motion-activated sprinklers. Blow-up owl dolls have also been a reported success.

Just be sure not to kill them. In the United States hawks and owls are protected under the law, specifically the Migratory Bird Treaty Act (16 USC, 703-711). If you are reported, you risk paying a steep fine and can even spend a few months in jail.

We consulted our local Game Warden and while he did say that several birds of prey in our area were protected, he also said that we do have a right to protect our stock. (S-S-S) We no longer keep bantams, pigeons or guineas (the guineas roost in the treeline and the owls just pick them off at night). We could keep bantams in the grow pens if we just HAD to have them. Our grow pens are covered and only adult birds are allowed to free range. We have large guard dogs and small watch dogs (alarms) so ground based predators aren't a problem for us.
We did try unsuccessfully to catch one GHO that had figured out the routine, she couldn't carry off a grown chicken so we left her the carcass to eat on to keep her from killing fresh every day while we set the trap. She ate a carcass down and managed to carry it to a nearby power pole, the power company found her at the base of the pole when they came to repair the transformer. Too bad, she was a beautiful bird.
http://www.fws.gov/forms/3-200-13.pdf
Go here if you want a permit to kill/trap your owls and hawks. Obviously this only works for those who can shoot in their area.
Nice. I just found out at 330 this morning from my husband that when he went to close my birds in late yesterday afternoon I had a guest. He said my birds wouldn't go in the coop. He went in and saw a fresh dead bird and an owl.. who was trying to get out but husband was standing in the door. He went towards it moving away from the door and it went out. Now I'm doing my homework to make sure that doesn't happen again. :/ Thanks for this info!
So we definitely heard the telling hoot of an owl in the spruce under which our coop sits and can tell it has a nest there although we haven't yet seen it. We welcome it actually and it's sound was appreciated as we worked today. It sounds like owls will only attack chicks but full grown chickens won't be a problem. We're wondering as we intended to let them free range during the day with our coop door open once we're up how much of a danger they pose to full grown hens and a rooster. We can compromise by only letting them free range when we're outside if need be but want to be able to let them roam and don't want to net our back yard or else kill or trap or remove the owl. Can we just protect our now three week old pullets by keeping them in the henhouse until fully grown?

Also, how have people socialized their dogs to their chickens? I presume chickens are capable of defending themselves with their own talons and beaks?
Owls will kill full grown chickens i just learned. Just lost 4 adult birds in the last 2 days to an owl. I didn't understand what was happening until this evening. I went down to the coop to bring some water and the birds are freaking out. i walk up and a huge owl swoops out of the coop. I was lucky and was just in time or i would have lost another chicken. Its first kill was in the coop in the morning, it basically ripped the throat out of the chicken. Saw the owl sitting in our trees but didn't realize it was here to eat. the next 3 kills were over night. Ripped the head off 2 birds (don't know what happened to the heads) and just killed another without dismembering it. Gonna have to learn how to deal with this. . . yikes