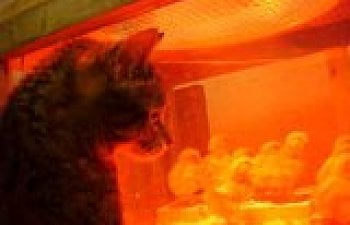 This is my house cat 'Bee' (short for Bumblebee) staring at the chicks in the brooder. Because it's plexiglass, she can see everything the chicks do, and she stays with me when I allow it, her eyes glazed and her jaw often clicking. The lust in her eyes is obvious, and I'm glad hubby and I covered the brooder with hardware cloth and created a latch to discourage her. The brooder is in a basement bathroom and I can lock her out and I'm careful to do that. Sometimes I find her lurking outside and when she sees me she trills and asks the price of admission.
She is what she is. Cats are hardwired to feed on small mammals and birds, and considering her feral roots, I would never expect her to behave otherwise.
Before continuing with some thoughts on protecting my new chicks, I'd like to share the details of an event that occurred years ago at a friend's house. Aileen and Lyle found a magnificent gray angora on their lawn and tried to find his owners when he refused to leave. Now they had a boxer at the time and didn't anticipate having a cat. As they searched for his owner, it became clear that 'Bogart' ( you have to call a cat something) was excessively fond of Aileen. Lacking cat food at the day of arrival, Aileen explored her freezer and cooked some scallops for Bogie. Now Bogie is a smart cat, and I'm sure a little light bulb ent off in his brain at theat moment. Aileen bought him a harness so that he could go outside on a long line but so that he would be available when the owners ere found. Despite their best efforts, the weeks passed, Bogie learned how to control the Boxer and he is with them still. Aileen is not a 'cat person' and Bogie's indoor behavior was exemplary, and I remember remarking at how much I liked him and she told me of his exploits and how domesticated he was. Still, he looked out the picture window with a certain melancholy and often swept the empty space between himself and the birds before clicking his jaw and smirking.

One day when he was out on the line he caught a bird, hard to say whether a sparrow or a junco but Aileen was horrified to find him chewing the head as Bogie sprawled out on the lush lawn. Now i was chuckling inwardly but Ailen truly *was* horrified. She scolded him as Lyle tried to explain that he couldn't help himself and when he offered his trophy bird to her, Aileen stormed into the house, heartbroken. Bogies expression was ' Wassamatta with her? I am what I am, and I tried to share.' Over the next days he was wormed, scolded and kept indoors. But Lyle later told me he lets Bogie out regularly in his harness and if the cat gets a bird, well, why mention it?

My point is that whether you are isolating your birds from a cats, rats, dogs, weasels, ferrets, foxes, coyotes, reptiles possums, skunks or raptors it's futile to think that the genetics of the food chain can be changed. You can hunt some of the predators. I would not be averse to disposing of a rat, for example, but the plain truth is that the niche will be refilled quicker than you can reload a 0.22. Not only that, but poison can be a double-edged sword because a contaminated body might be eaten by a pet, including a chicken. Our planet works that way- eat and be eaten.

So what's the answer? Well, the answer is expensive unless you have access to unlimited free supplies of building materials and wire mesh. I'm not talking poultry wire either, that stuff may keep a chicken in, but several animals, notably raccoons, will reach through it, grab a chicken by leg, wing or neck and kill it by straining it through the sharp edges. Many of us are using hardware cloth, aka mason wire with 1/2" mesh. It keeps out a lot of thing- rodents, reptiles, mammals. A baby mouse might ease through, but you know chickens love to eat them.
It's called biosecurity. I received an email from a dear friend the other day. For decades she and her husband had free-ranged their flocks which included quail, guinea hens, Rhode Island Reds and some amazing show and layer stock. They have wonderful acreage along the ocean on the south shore of Nova Scotia. Though they secured the most valuable of their chickens, they had always used the guineas for insect and tick control. Not any more. The area is more heavily populated and stray dogs have been killing their birds. The first year they thought they had identified the culprits and dealt with them, but a second heavy killing taught that their years of free-range were at an end. Victims of pets. Parts of the peoperty are fenced for horses and the perimeter contains cattle wire, but the dogs jump or climb in. How utterly frustrating.

This site contains a Predator section and I hope you'll visit it. I also hope you won't have a problem! The secret is in coop/run construction and in routine maintenance. Do you have barriers to keep rats from digging up to your birds? Can your barn cats be kept away from your birds? Do you have your vents and other openings blocks to prevent snakes from ascending and descending? Are you fully aware of predator behavior and know how to identify tracks and other sign? Is your run covered, and do you have anti-digging barriers? If you have lost birds in the past, please know how badly I feel. Emotions can run rampant and the horror is real. Of all attacks, I believe weasels, rats and raccoons can be the most unnerving. It's no fun finding a large snake in a nest box, either.