Article Reviews (1) Gallery
In my effort to make things easier for my fellow browsers from the painful land of DSL connections or worse, that dreaded actual modem of very old school dial-up.

We have a whopping 3.5MB/s downloading & streaming speed "in the most ideal weather" and a more normal 2.5-3.0MB/s download speeds.

With that in mind, I'm always trying to be as careful as I can when I'm filling a post with a multi megabyte picture that can really strain the downloading for all other users. Especially those in wifi only mode with a few bars and a download speed of 0.5MB/s.... That's a bit like trying to breathe thru only one side of your nose while hiking up 10 flights of stairs with both arms full of groceries.

So here is a modem friendly photo tweaking thread of free advice.....

I'll start with the following two pics that I have taken. 1st) is in portrait mode the 2nd) is in landscape mode.

I used basic free apps and this can be done just the same within windows the OS, as well. The nice thing to rest easy about is that the original picture stays the same, all this is creating a new image that is a smaller footprint.

So here is photo 1) the portrait mode full image which I have already shrunk ONLY the file size and it is now a much smaller file for use in here. It's now down to 2.57MB in size.

The subject in these pics is our coop in a very early stage of being built.
Portrait Beginning: 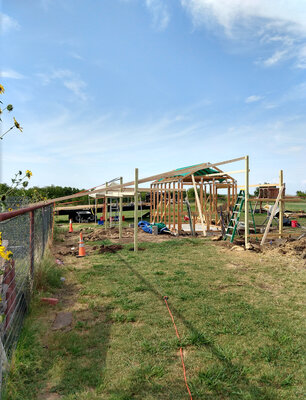 Do make note of the distraction imagery in the picture. Note also all that wasted space in the upper half of the image of "sky." 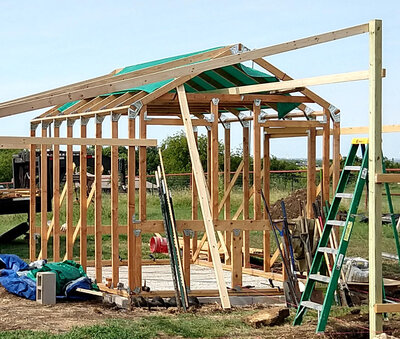 There is the coop. Yes there is still some distraction in the image but, it's a much improved product for starting on task and on topic. The "coop".

Now for the landscape version when you hold the phone sideways...... This image is shrunken even further to a 1.53MB size. 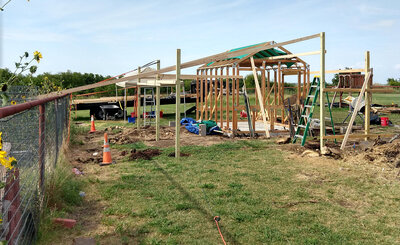 This one I have already cropped all that sky out of the original shot that's well over 3MB in size. No real need to be redundant and waste bandwidth here in the post by having all that sky in this example as well. Fair enough?

Good. So now here we have the same surrounding & distracting stuff in the image of the coop that needs to be cropped out.

Now you have a reasonably good cropped image of the coop AND the frame of the run as well.

What do you think could be further cropped out to give an even cleaner image of the focus in this post of the coop & run?
A) I'd of cropped out that red bucket on the right side
B) I'd also crop at least one more segment of the fence on the left side
C) why not also trimmjuat a bit more off the bottom?

Now, hopefully you can go forth and have a much better time getting that picture of your chick or Roo or DIY project in a cleaner picture and make it easier on the rest of the users when it comes to *seeing* what your post is talking about.

I know we have several very accomplished shutterbugs around here too. So, I'd bet that they will likely complement on your skills with the camera here and there as the weeks, months and years pass by.

I am no expert. Just passing on wisdom that was shared with me years ago. This is not the "only way", nor is it the "best"....
I use it not just in here but, in every other forum as well as on Craigslist when I have something to get rid of.

Perhaps someone else will share a topic on focusing on the birds plumage and how to gently handle the bird for the picture and there could also be one for chicks as well?

Great info for those of us that are tech-illiterate and don't know that a simple "crop" will drop the image size significantly.
Read more…

Hi there! Do you want this in the article section or in the forums as a thread?
Last edited: Nov 17, 2020

casportpony said:
Hi there! Do you want this in the article section of in the forums as a thread?
Click to expand...

Yes. That's what I "thought" I was doing. (Shrugs) guess I oopsed eh?

electrycmonk said:
Yes. That's what I "thought" I was doing. (Shrugs) guess I oopsed eh?
Click to expand...

no worries, just start a thread. I think it's a great subject.
You must log in or register to reply here.