The Art Of Socializing Chickens

What better pet than one that comes up to you, follows you around, and lays a tasty treat? If you haven't caught on, I'm talking about chickens here. When handled properly, most chickens can become quite friendly, smart, and sociable. As I've learned through the years, there is most certainly an art to socializing your chickens and while it is simple in some ways, it can be very difficult in others.


Why socialize?
That's a very reasonable question. After all, media typically shows chickens as "bird brained" egg-laying machines. So if they will lay eggs regardless of how social to you they are, why put the time and effort into socializing?
If, like me, you first got chickens for eggs and then realized that they can truly be a pet, then you probably wanted to make them the best pet. They can be very loyal, help improve your mood, and make interacting with them a lot easier if they are socialized.
It can also make for an interesting experience with chickens if they're social. You may find among your daily adventures that they follow you around, cluck at you, and simply enjoy you being near them.
Before you begin, it is important to consider that not all breeds of chickens will be as social as others. Some breeds, like the Rhode Island Red and White Star, are said to be less likely to be social with you. Others, like the Easter Egger mutts and Orpingtons, are more likely to be your best pet. However, I have had many social Rhode Island Reds, so it is still possible for a chicken of a typically "anti-social" breed to be social. 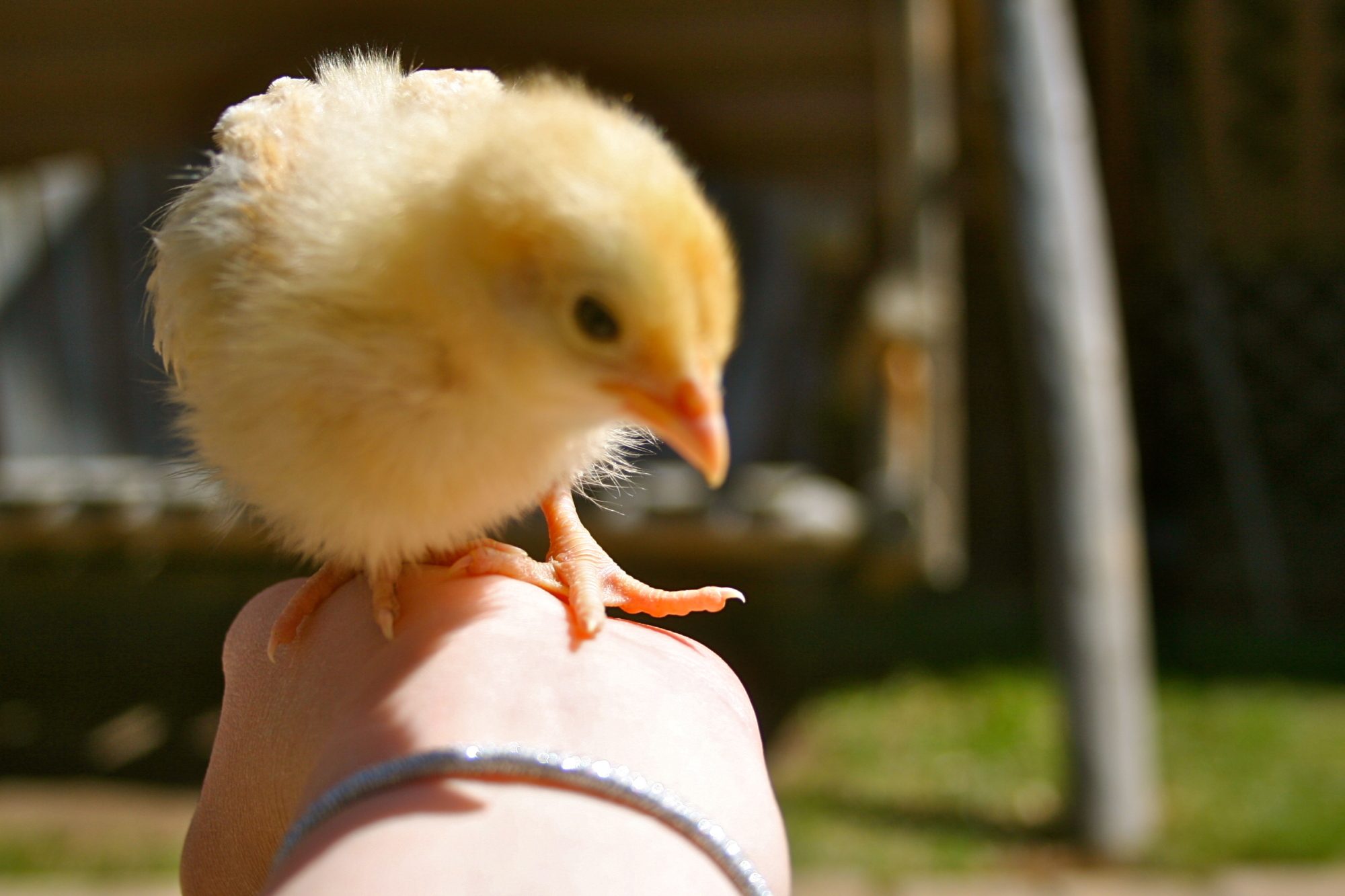 I fell in love with how cute a chick was, and I would spend hours each day watching the chicks, talking to them, making mother hen noises, and gently holding them. This is key: beginning the socializing process when they're a chick. This works great because the chick can spend most of its life with you as its caretaker, and it will soon come to love you. It will learn at a young age that you are there to love it and be its friend.
There are the do's and don'ts of this time, though.
Do:

When you come off as a caring and gentle person who is, most importantly to them, the person who brings them food, you soon can become their best friend. This stage is often very misleading. It's at this time that the once friendly and loving chicks may now seem to hate to be held and pet. However, if you do not continue to interact with them, there's a good chance that any socialization may be lost. As stated previously, visit them often and talk gently to them. It also helps to ease their wariness of you if you hand-feed them treats every few days and call them by their names when holding them. They will come to know you as the wonderful caretaker who brings them treats and doesn't harm them. It is VERY important at this particular stage to visit them often so that they can get used to you. They will be weary, but do not be discouraged. Although you may want to hold them less than what you did when they were chicks, simply talking to them frequently each day will have them thinking of you as a friend.
At this time, hormones also begin to pour throughout their bodies. The once friendly cockerel may now come to see you as a threat. It is very rare that a rooster is as friendly as a hen, due to his instincts and hormones. Hens may temporarily seem very antisocial towards anyone, but as stated above, show them that you are there to feed them and love them. As they continue to mature, also be sure to not make and sudden movements around them. They may view you as a predator or threat, and begin to not trust you anymore.

Adulthood
This is where it finally pays off! The moment that all the months of effort will come to show!

While it may not show up overnight, you'll be sure to notice it if it's there. When you call to them, they may come running to you. They may also follow you wherever you go, beg you for treats, cluck at you, and some will even perch on your arm, back, or shoulder! Mine will still peck at my clothing as I refill their water and food, come running out the coop door when they hear me, follow me around, and cluck at me constantly. They have remained this way because I still interact with them very much. I hold them all often, let them eat from my hand, and make a clucking noise back at them. They continue to view me as a friend because I have continued to socialize with them. But what about if you adopt a chicken when it's an adult? How would you socialize it from there?
Yes, this is definitely harder than beginning this when he/she is a chick, but it is not impossible! I've seen that here, the chicken will act in a similar way to if you're dealing with an adolescent chicken. He/she often may not want to be around you, make an effort to get away from you, and give you the stink eye. Still, treat them with an air of friendliness and don't force them to want to be near you. Approach them slowly, offering treats in your hand. If you get the chance, pick them up and pet them, while you talk and stroke them gently. It will take a couple months before they can trust you, but some will be a very loyal pet.


In Summary
Simply spending time with them, holding them softly, talking to them, and showing your chickens that you are the friendly food-giver throughout any stage of a chicken's life is sure to have them following you as though you were their mother hen. As long as you make an effort to be nice to them and not harm them, continuing to interact with them throughout their lives, they can even be as friendly as a dog or cat.

A special thanks to @Mountain Peeps for the use of the wonderful picture!
Reactions: N F C

Wonderful job!
Great article! Very well written!
Good article!
Good job! I just hatched babies, so perfect timing!
Thank you all!
Wonderful!
Thanks! I plan on having my chickens as pets, and on what I've researched through out the web, you covered it all in one article! Good job!
Nice article. I always give my chickens a good amount of attention, but when I am off for breaks (I'm a teacher) they get even more attention. My first day back after Christmas break was hilarious. I opened the door to my gate and was swarmed. I turned my back to close the gate and had a chicken on my shoulder. I really think they missed me. I have a puppy that they tolerate. One day, when I was squatting down petting a chicken, he started pulling on my sweater. Another chicken jumped on him, in the same way they do with a young rooster who is being rough. I never thought I would have a chicken watching my back.
great article, thanks for sharing!
wonderful
Bravo! Great info for those who want friendly birds.

After hatching with a broody, buying chicks, and hatching in house- I can say that the in-house-hatches tend to be the sweetest. I guess being there since minute 1 really effects their behavior towards people? Don't get me wrong though, I do have some sweeties I mail ordered from MPC... they just seem to take more work to trust people. I don't know, maybe it's just a coincidence, haha.

It also VERY much so depends on the breed, seramas for example, are lovely sweeties, even if not handled much. Same goes for d'uccles (profile picture), COTURNIX QUAIL, bantam cochins, and other itty-bitty bantams. My New Hampshire Red hen is very sweet, so WAS the buff orpington (now decided she doesn't like us after 6 years...). I actually have found it is probably about 50% of how you treat them as babies and 50% just their genetics and breed.

Anyways, awesome job with the article!
Great article! Very well written! Yep, that's exactly what I do! Now I have 4 little lap chickies who run to me everywhere I go.
Very helpful and informative article! Good job! I have a hen (BO) who when about 6 months old would be very hard to catch to put in the coop or to pick up in general. Then after about 8 months, she started to become closer and closer to me. She would let me hold her for a few minutes and would about 3/5 of the time let me pick her up. Now that she is the only chicken and I spend a lot more time with her, she lets me pick her up whenever I want, will peck my clothes for treats and follows me around! When I let her range, I stand next to her and we walk side by side. When standing, she'll go through my legs and when sitting she'll go under! Time with your chickens really pays off!
Great that you mention the teen age unfriendliness! I have experienced it many times. And after they start laying or mature a little they return to friendly. We have a good 5+ lap chickens. 1 is even jealous and chases other chickens off then returns. One tip, babies brooded where they can see you, not a solid wall box, are sooo much calmer! And avoid pressure on pin feathers when holding. Nice article!
Great article! We have done the same...the chicks used to jump into our hands all the time, not so much anymore though but they will follow me around like mama hen around the property...I'll even scratch the ground with a rake for them to show them where the good stuff is...they all def have their own personality lol
You must log in or register to reply here.