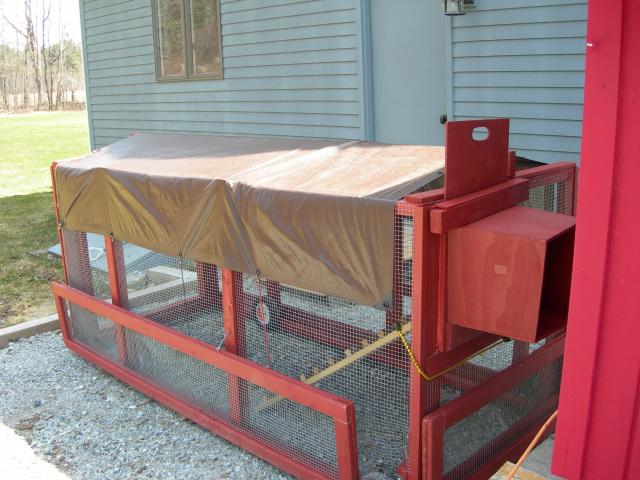 I spent the fall 2008 and winter 2009 building the "Cluck Wagon" in my garage. I started off by buying a homemade trailer sized 4'x4', so I made the coop 4' wide and 66" long with the overhang over the tongue. I drew out the design, bought materials at Home Depot as I went along and decided to fully insulate it because of our cold winters. I saw an old window by the side of a building, so stopped and asked if they were selling it. They said, "If you want it, it's yours". It was a small window that allowed the bottom pane to open on tracks. I took it apart and had two equal sized windows that were the perfect size. I used texture 1-11 on the outside and OSC board on the inside with pink 1 1/2 insulation in between. I built the roof inside the garage too, using two 4x8 sheets of plywood, but couldn't put it on until I moved the coop outside because it was too high to get out of the garage. Moving day was a disaster. A neighbor offered to help my partner and I lift the roof on one cold rainy Saturday morning -- a five minute job, right? That was the easy part, we just stood the roof on end and lifted and slid it onto the coop. Then I hitched my lawn tractor to the trailer and started to turn to move it to where I wanted to park it. The axle broke, the roof fell off (I hadn't bothered to attach it with nails yet) and it almost upended the tractor. Thankfully, I had another trailer and my neighbor had a big tractor with a fork lift, so he lifted the coop onto the new trailer, we put the roof back on and I finished shingling the roof that week. As I was building the front, I cut a round opening for 2" pcp pipe so that I could run an extension cord for light or heat. The windows open and there is about a two inch ventilation space at the top of the side walls 2/3 of the way under the eaves. The pen is 8' long and 44" wide and 44" deep. These dimensions were also dictated by the first trailer. I build it so that it would butt against the coop and could be attached or detached. When we moved the coop to the new trailer, though, I had to alter the pen with a "runway" because the coop wasn't flush with the end of the trailer anymore. I built a gravity fed feeder with a plexiglass front to check the levels and hung it on the inside of the door. It has three compartments, one for feed, one for grit and one for oyster shell. And, of course, a Cluck Wagon name sign. The nesting box door opens to retrieve any eggs once the chicks are old enough to lay. The chicks arrived on April 19th. We gave our wonderful neighbor all but the six chicks we kept. Our granddaughter chose the names of: Barred Rock (Dottie), a Salmon Favorelle (Popcorn), two Aracanas (Hopscotch and Lips) and a Astralorp (Chessie) and a Rose Comb Leghorn (Moncala). The chicks are in our bathroom until they reach the two week mark, then I'll transfer them to the coop with the heat lamp. I check on them at least 50 times a day right now, so I want them in the house. Oh ya, I forgot to mention, I'm a soon to be 62 year old woman and I built it all myself. Not bad, huh? This is My Page.

really liked this article, very nice photos. I like the coop design but I don't think that you provided enough details in the construction process.
The coop is nice but your article needs more photos and details that would help someone with the building process.
Read more…

Thats blooming great, well done, your an inspiration x
Fabulous coop! I admire your stick-to-it-tive-ness. I especially like the idea of the feeder with the Plexiglass front so you can tell at a glance when to refill. I'm about to start building a coop for my new chicks and I think my story will follow yours. Thanks.
Love it! Great job...
Love the name!

May I call my new tractor the Cluck Wagon as well?? I love the name so much, but don't want to offend by being such a copy cat. Thanks!
Awesome!