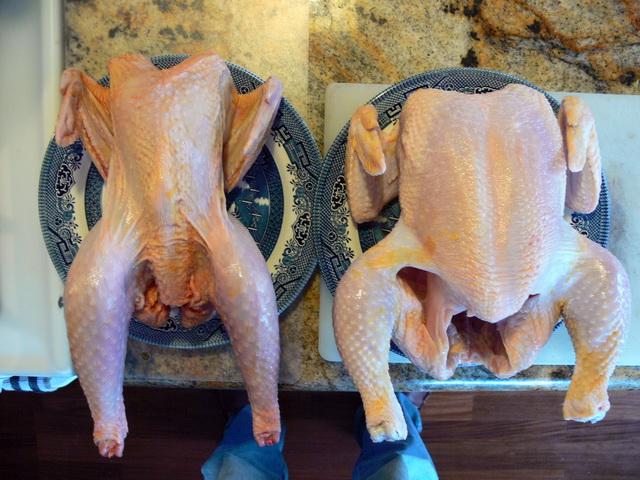 Most Americans are used to eating chicken from the store. Most of this chickens are about 8 weeks old or younger, and just like any other meat source, the younger the animal, the more tender the meat. You can fry, bake, grill, broil, stew, or crockpot store bought chicken, and pretty much be guaranteed you will still have tender meat.

Each year, millions of non-meat chickens are raised. While many chickens either die from predators or natural causes, there are those who look with a hungry eye upon a older, non-laying layer hen, or a rooster that is a year or two old and has overstayed his welcome by becoming aggressive with the hens or even humans. Our grandparents and generations before are used to using these older birds for meat, but use them in cooking methods that enhance the age of the chicken. Coq-a-vin is a common dish that originally was used for old roosters, and the term "stewing hen" has been around for a long time. While these terms still remain around, the tricks and tips used to create these dishes sometimes are forgotten. Without the correct steps and car, the best recipe for coq-a-vin can still fall flat and render a pretty chewy disappointment.

The first tip to using older chickens for meat is to make sure your bird is still in good health. It is not a wise move to consume a bird that is obviously showing signs of illness.

The second, and most often overlooked trick, is "resting" the meat of an older bird. Generally, older birds have had years or running and flapping around, and their muscles are good and strong. The natural course of death causes rigor mortis to take effect, and my personal findings with older birds is that rigor lasts longer in old birds than in young birds. For an ideal older bird meal, even if you are stewing/using a crockpot, one should let the bird sit covered in a fridge for at least 3-4 days. If you are using clean processing techniques (as you always should!), there is minimal to no concern for contamination. I personally have let processed birds sit in the fridge for a week or so, give or take a few days.

This "resting" time not only allows rigor to pass, but allows the chemical reaction in the muscle tissue to occur that is similar to the aging done on prime beef (which "rests" for up to 28 days!) Over time, enzymes in the meat begin break down a stretch out the muscle fibers, and this creates more tender (and often tastier) meat. A balance must be found for this muscle relaxation and breakdown, and the potential for meat going "bad". Properly aged meat of any kind should never have an "off" flavor. My personal experience with resting "old" chickens for a week (and up to 10 days on accident), resulted in no bad flavor or smell, and a quality chicken product.

Brining is also a popular method for enhancing tenderness. Brining requires the use of a mixture of water and salt (usually 1 cup of salt to 1 gallon of water), with the addition of spices and the like. Brining causes the meat to pull in additional water for moistness when cooking, by the concept of osmosis. There are a multitude of recipes available for brine mixtures, but the common theme is to allow the bird to sit in the brine for at least 12-24 hours. Some people prefer to rinse the bird after brining to remove some of the salty taste.

A quick way I've found to brine is to line my refrigerator crisper with a strong, non-scented clean garbage bag, place the bird in, and fill with the premade brine. Fill up the crisper, close the bag up, and let it sit for as long as needed. Other methods include using a cooler and adding ice as needed to maintain a cool temperature.

As for cooking, older birds lend better to low heat, moist types of cooking. I prefer to "roast" older birds in my heavy stainless steel dutch oven. It's also good to remember the temperature when cooking stove top or in a crock pot - boiling water is 212 degrees, and that temp is higher with the addition of salt. This can be a bit high for cooking older birds for stewing. I prefer to treat my stewing birds to a slow simmer in a stock pot - this takes longer, but the resulting meat can be easily shredded and doesn't remain "stringy" or chewy.


Chicken Stock in the fridge - the fat is rising to the top and will be skimmed and saved before the stock is separated to 2 cup increments and frozen: ​
The resulting "old birds" when made into a meal often have MUCH more flavor than store meat. The stock is very rich and "chickeny" and lends well to freezing or canning for later use. I like to keep the skimmed rendered fat in the fridge for use in potatoes - it's rich and tasty. A stewed older bird can create gallons of stock and usually a couple pounds of shredded meat that go well into tacos or chicken salad.

There really is no such thing as a bird that is too old to eat. Resting for a longer time and brining, combined with slow, low cooking will make even the oldest bird tasty!


Chicken and Dumpling soup from an older chicken: Back to How to Raise & Process Chickens - Tips, Information and Pictures​
Reactions: greenwos, ChicKat, MarthaTheRooster and 3 others

This article along with some internet research resulted in a braised old, old, old (6 1/2 years) spent hen being 'braised' or 'stewed' after a process of -- butcher-->rest-->freeze-->thaw in fridge (3-4 days)--->brine in salted water (3 days +)-->cook in slow cooker on keep warm setting (26 hours or more -cooking must continue until the meat literally falls off the bone)

It amazed me that the meat was flavorful, tender, moist and quite good. What I was expecting was something tough stringy and inedible. A laying hen not a meat bird.

Good article. Thanks.
Well written Article!
Reactions: Lady_Bat
We like to soak our Gator, Duck, Hogs and some fish, in a water, salt, ice and white vinegar brine. It makes all meat so tender and clean! Thanks for sharing your knowledge!
Reactions: ChicKat and Lady_Bat
Read more…