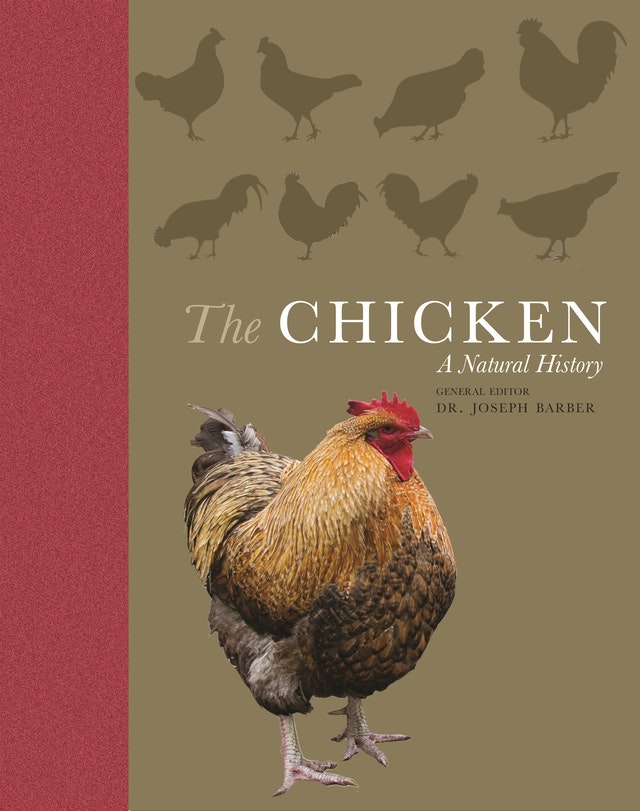 The Chicken: a natural history

A comprehensive guide to how chickens live, think and act, by academics for non-academics
Overview Reviews (2) Gallery
Leave a rating

Title
The Chicken: a natural history

This fascinating book, published by Princeton University Press in 2018, covers the evolution and domestication of chickens (chapter 1), their anatomy and biology (chapter 2), behaviour (chapter 3), intelligence and learning (chapter 4) and the principal characteristics of 40 popular breeds (chapter 5). The authors are academics in various biological sciences, and offer insights into recent research on chickens - some of it surprising, such as that chickens have a good sense of smell, roosters' fertility varies with daylength, and the full genome for the domestic hen was first described in 2004 - but they write for a general audience, and the book is easy to read and well illustrated.

The introduction emphasizes that this book is about the nature and behaviour of modern chickens living in someone's backyard, written in order to help people who already keep chickens to understand them better, and to educate people who are thinking about keeping chickens.

In chapter 1 we learn, amongst other things, that the earliest evidence for the domesticated chicken comes from China, and dates from about 5,400 BCE. The main ancestor is the red jungle fowl, as Darwin thought, but it has recently been discovered that the gene for yellow skin probably came from the grey jungle fowl. Domestication appears to have happened independently in different parts of Asia. Moving into the historic era, the earliest image of chickens in Europe is on pottery from 7th century BCE Corinth. The common sight of a weather vane in the form of a cock arose from a 9th century CE order to all churches in Europe to fix a symbol of a cock on the steeple. As for the Americas, the DNA extracted from chicken bones excavated on the coast of Chile and carbon dated to 1320-1410 CE suggests that Polynesians brought their chickens to the west coast of the Americas at least 100 years before Columbus arrived on the east. Moving into recent times, most historic breeds of chicken are dual purpose; the development of breeds specifically for laying or eating only began in the late 1950s.

Chapter 2 has sections on the skeleton, the muscles, the heart and circulation, the respiratory system, the digestive system, the male and female reproductive systems, the immune system, the skin, the feathers, the wattles and combs, the sensory system, thermoregulation, and adaptations for flight. There are well labelled diagrams for each of these sections, and guidance on, for example, reading the crop and correct handling. Anatomy explains some familiar phenomena, for example, why some chicken meat is light (breast meat) and some dark (leg meat); this is due to the relative absence or presence in those muscles of fat and a protein that carries iron and oxygen, which varies with the amount of work that they do. Chickens use their legs a lot and fly little, so the dark meat is in the leg and the breast is white. In wild birds that fly a lot, the breast meat is dark and the leg light.

Chapter 3 is the longest in the book and covers a wide range of behavioural topics. It first notes the continued legacy of red jungle fowl behaviours in their modern domesticated descendants including, for example, a strong social structure and order, multiple females mating with one male, and the female parenting the chicks alone. Scientific studies of birds have demonstrated that some behaviours once thought to be innate are actually learned. Apparently altruistic behaviours, such as the rooster inviting the hens to eat good food he's found, instead of eating it all himself, or issuing an alarm even if it draws the predator's attention to the bird making the call, have been the subject of some discussion and debate. Multiple hens choosing to lay in the same nest or, more obviously, adding eggs to a broody's clutch, is a form of parasitism allowing a hen to reproduce her genes without the costs of incubating and brooding them (on which see pp. 98-100), so long as one in the flock is willing to brood them. Preening is important for health as well as appearance. There is extensive discussion of flock dynamics and mating preferences.

Chapter 4, on intelligence and learning, is full of surprises. Who knew that chicks have a demonstrable preference for consonant music over dissonance, and can count? And that chicks developing in an incubator should be exposed to natural light, especially in the last few days before hatching, in order to assist their cognitive development, and in particular to help them develop neurons and connections that will be important in discriminating between food and non-food items, in spotting potential predators, and in helping them form strong and stable social groups with other chickens? Chicks start jostling for rank about a week after hatching, and their pecking order is established by six weeks. Rankings fluctuate over time, as birds grow, fall ill, and get predated, so dynamic assertion and testing is normal. And they can change their minds; familiarity may guide their initial preference, say for a particular type of food, but it may change with increased experience of what was a novelty. 24 unique vocalizations have been identified, including the gakel, a whining long note followed by a series of short notes, which indicates frustration.

The final section is some Useful Resources, which includes a much more extensive breed list organized on the same lines, brief biographies of the authors, a bibliography - wherein I'm pleased to see backyardchickens.com appears

- an index and acknowledgements.

Perris
thanks Meg!
S
Sally PB
Great review. You have made me want to buy the book.

Your detailed review motivates to buy this book! Thank you very much for this recommendation @Perris

you're welcome LF ; I'm glad it was useful to you
https://amzn.to/3bVqfCW