This is a picture my mom snapped with her cell phone. My son found his favorite chicken scratching around under the deck. He sat with her and read "Hop on Pop" to her before he had to catch the bus! 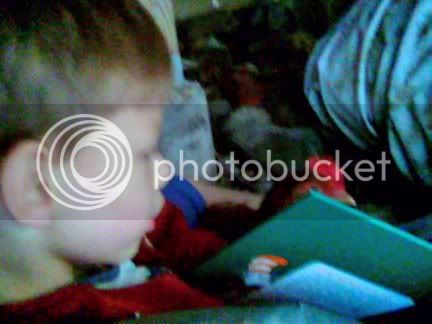 Too cute! I love when our younger three interact with the chooks! Our oldest daughter is trying out for the States Choral competition.....she will sit with the chooks and sing to them! They seem to love it

they all lay at her feet and listen and watch her!

Our first batch of chicks would run to the front of the brooder when they heard his voice. They just loved him. We only have one of them now since all three turned out to be roosters. But he's still the only one who can pick up George the silkie without a fuss. He wishes they would stay small forever but he's getting over it. It bugs him that not all the hens are cuddly like his red stars. And it really bugs him that one of the BOs loves ME more! Oh well. At least he's nice to them. And I love it that's he's so motivated to read. That's a whole subject unto itself.

This is such an adorable picture! what a lovely boy he is, and what a lucky chicken to have such a good friend. Thank you for making me smile!

I figure that anywhere a child is motivated to learn or study is a fabulous place to be! When the 15 year old wanted to sing to the chooks I thought, well, okay......but you know it works and the chooks really do seem to love it!

Thanks guys! I do really enjoying seeing how much he loves our chickens. He is as excited as I am to see who is going to start laying eggs next and gives them little pep talks all the time. Even the rooster. We had a little chat!

The young scholar at home with his flock! Too cute!

Let's see... What first grade level books have to do with chickens...?

Um... There is a book called "Chick: See How They Grow" and a story called "Little Chick's Breakfast" (I have *that* one practically memorized because my little brother loved it back when he was 3, and that was 15 years ago...). You can probably find them on amazon.com. Here are links:

That is cute. I have a son in the first grade too. He hasn't read to the chickens yet though.

Lethargic 6 year old hen with pale comb and wattles seems to be getting worse. Is it parasites?