Hi,
Snowy, our 7 weeks old, White Jersey Giant, injured her right leg and left wing when our waist-level chicken run collapsed 2 days ago.
We didn't notice the injury on her wing until about 1-2 hrs after the incident. There was some brown stains under the feathers on one spot. It seemed to have been dried up blood stain. She could still flap her wings so we are not so concerned of that.

It is her right leg that we are concerned about. She is not able to use it. She can only hop on one leg. We brought her to the vet yesterday and vet said she broke (same as fractured according to the doctor) her femur (slightly above knee). Don't know how serious the injury is as we didn't take the x-rays. We were told there are 3 options: 1) surgery, which will cost thousands of dollars, 2) let her heal by herself (30% chance), minimizing her movements in a smaller space with food and water, 3) euthanize her. We chose choice 2.

We need some advice on three areas:
1. Is there any ways to give her better chance of recovering the leg? Tips to follow?

2. How to keep her moving very little to let the leg heal and not jeopardize her being left out by the flock?
Already with her hopping on one leg among the flock 1-2 hrs after the incident, she got pecked on by 1 chick (I have 8 in total). On the 1st night, we let her sleep with 2 other chicks while the other 5 sleeps in another brooder box. (We have 2 brooder boxes with a connecting hardware cloth window. We got 2 groups of chicks (five and three) and let them roam in the run together during the day but at night they are separated because of some pecking aggression and chick running due to fear). We did put Snowy in a protected cage-like box in the run later on Day 1 of the incident after the pecking and then we let her join the flock. But now that the vet suggested keeping her in her own box and minimizing movements, we made another brooder box for her with a window (with hardware cloth) connecting the brooder box of her peers (the older group). Could see that she loves hanging out near her peers. They all slept near the window last night. However, the chick that pecks on her is from the other brooder box (1 week younger chick) and their brooder box is not connected to Snowy's. What should I do to help her still be accepted by the flock, yet still provide the best environment for her leg to have the best chance to heal? Should I put her back to the run during the day with the rest? Can I continue to keep her in her own brooder box at night for optimum rest?

3. In the event that Snowy's leg doesn't heal, she will only be able hop on one leg, how best can she still function and live with the flock in the future? Anyone has any experience with having and caring for a crippled chicken? We are in the process of building our hen house with attached run (something like the Carolina Coop) and the hen house is about 30 inches off the ground. I am concern that should Snowy's leg remains crippled, she will not be able to sleep with the rest of the flock in the high hen house. She may be an outcast in the flock and I know this is not ideal. Anyone has some success with keeping a crippled chicken well among the flock?

Thanks for your advice.

If you splint it she will have better chance of healing. It may not heal perfectly, but it may heal well enough that she can live normally. A high femur fracture often will require pins to keep it in place, a low femur fracture you may be able to splint well enough. If that is the only option available, then I would certainly try. Below is attached a splinting manual which explains how to examine for and splint various fractures that birds can get. Examples are songbirds, but the anatomy is the same.
You also may find it helpful to use a chicken sling for periods to help her rest it, and eat and drink more easily. You do need to supervise as some birds don't tolerate it, and you don't want her to hurt herself more. Examples below. 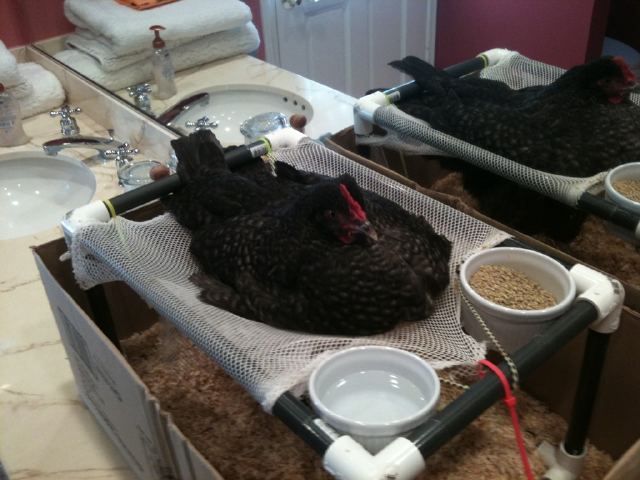 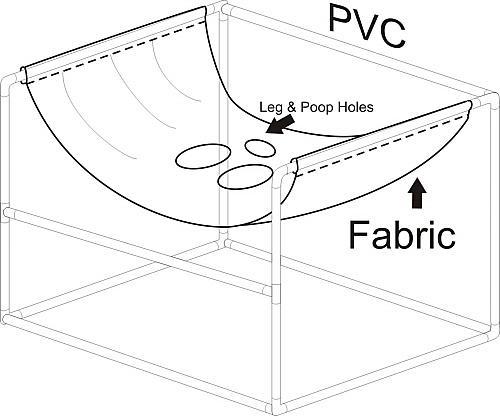 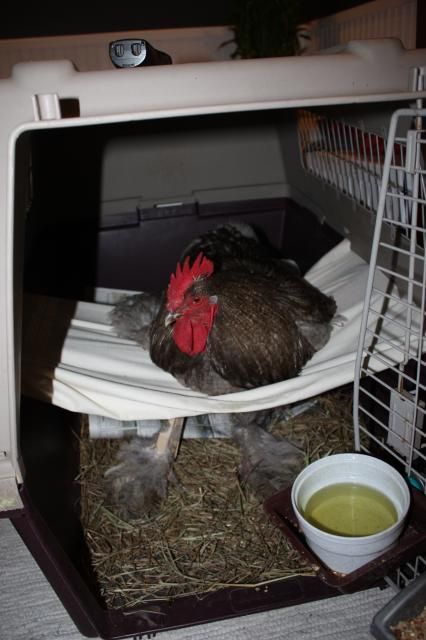 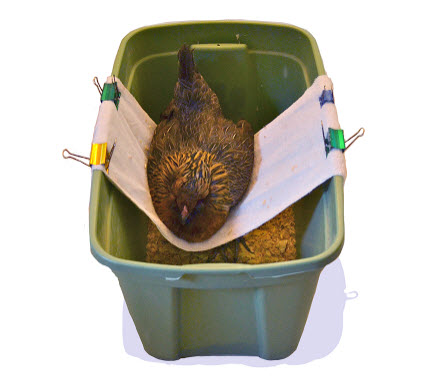 Thank you, coach723, for your advice and sharing the info., pictures of the sling and the Splinting Manual. Should the chick's legs be able to touch the floor or barely touching and somewhat dangling when on the sling? Also, I suppose she should be on it 24 x 7. How long should she remain there? Really appreciate you taking the time to share with me.

Most birds seem most comfortable if their feet just touch the ground, not enough for weight bearing, but so they know it's there. I would adjust based on what the bird seems to like best, how she is calmest. Usually it isn't used 24 hours a day, but for periods of time throughout, with some time out of it. You can also used rolled up bath towels to help prop her up comfortably, which is what I might try at night. I have done them curved around in an oval to cradle the bird overnight. Comfort is going to depend on what works for that leg. The risk being if she struggled and got herself hung up somehow in the sling while no one was looking, she could hurt herself worse. One never knows what a chicken will do, and when. Depending on how the break is, it could take several weeks, or longer to heal. If it's properly aligned and stable (doesn't move when she moves) the healing will be faster. If alignment is not real good or it's not stable it could take much longer. When a break heals it will form a callus, so over time the break may have a hard knot around where it heals, that should eventually go away. If the bone is not aligned well, then there may be a bump always.
W

Thank you, Coach723, once again. I am now looking into making one of these slings/chair.

K
6 week old chick has lost use of legs

Chicken Attacked by Predator few days ago, leg is injured, and she is unable to walk but can eat, What to do?

6-Week-old Chick- One Leg not working?
2