A Chicken Breed for Each Egg Color? (Is that possible?)

One of my many rookie dreams is to have a colorful egg basket to admire whenever I go visit the nesting boxes of my chicken shed. I have in mind nice, calm, cold hardy breeds that lay a minimum of 150 eggs/year, and are preferably equipped with pea, rose, cushion or walnut combs to repel frostbite, though I'll consider single combs too if no smaller comb varieties are known for the desired egg color. My targetted breeds are as follows:

Have I missed one or several breeds of chickens for the above egg colors with comb/cold hardiness/egg ratio/personality I'm seeking out? There are so many chicken varieties nowadays, that it's hard to keep track of all of them. Also, thoughts on this idea, guys? Any favorite breed you'd like to recommend in the above mentionned ones? Good/bad experiences, overall impressions, thoughts on those chickens? It's just a dream for now, but an appealing one I'd like to eventually try out in the future.

Thanks for any input!
K

Following! I also live we’re it is cold.

Terra brown? Is it a brown hen hybrid?

Blue Eggs: Whiting True Blue. (I am fairly sure they have the peacocks comb you are looking for but I am not sure if they are cold hardy)
Green Eggs: Whiting True Green
Brown Eggs: Buff Rocks, White Rocks, Barred Rocks (These have a small comb but not pea), Black Australorps (has a record of laying 364 eggs in 365 days

Chickencrazy2018 said:
Blue Eggs: Whiting True Blue. (I am fairly sure they have the peacocks comb you are looking for but I am not sure if they are cold hardy)
Green Eggs: Whiting True Green
Brown Eggs: Buff Rocks, White Rocks, Barred Rocks (These have a small comb but not pea), Black Australorps (has a record of laying 364 eggs in 365 days

I looked into Whiting True Blues. Sadly, they are not cold hardy types.

It took me a while to acquire and raise my flock. And it wasn't without some problems. But I love the flock and their eggs are beautiful. 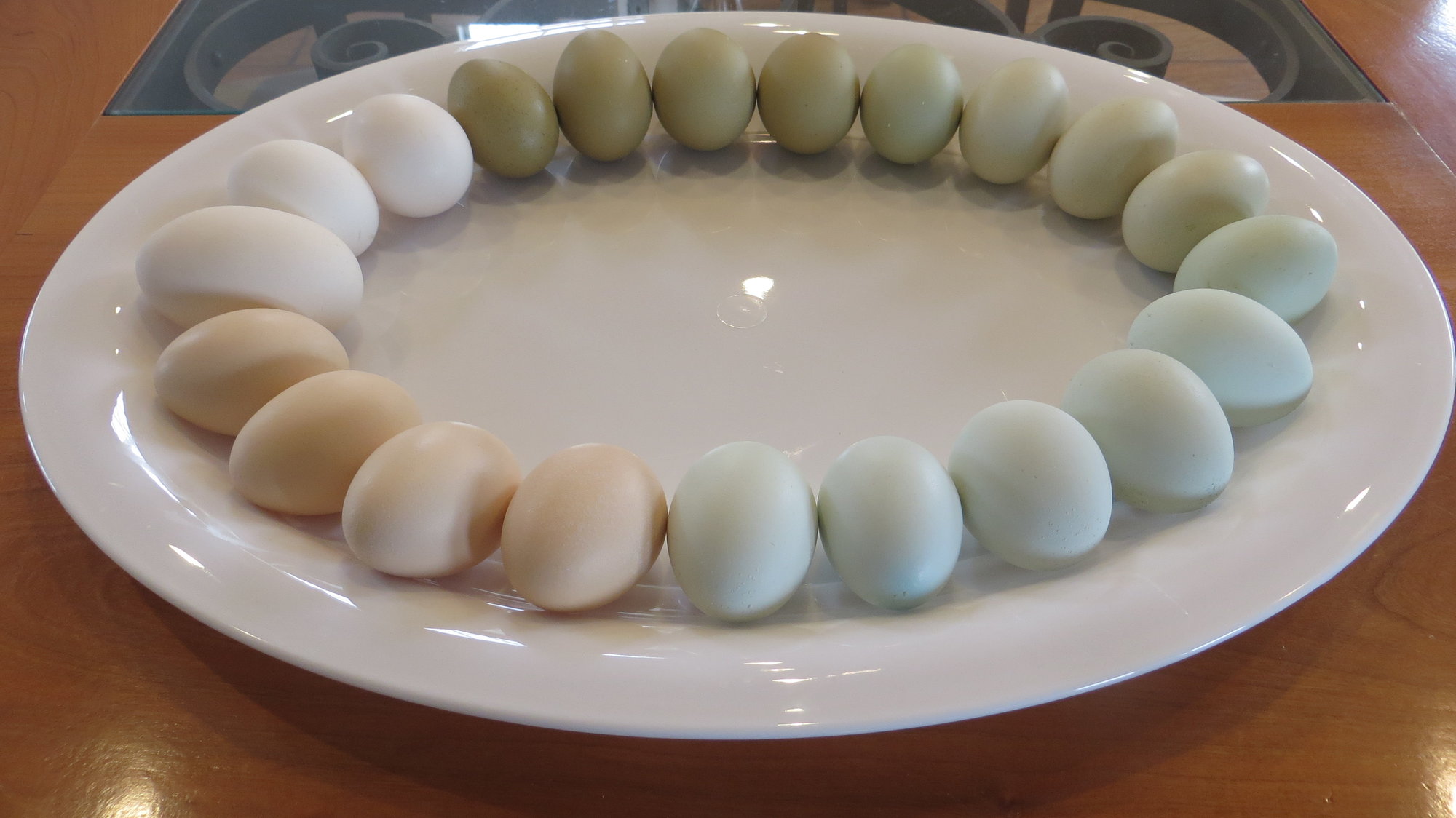 Here's what I have and what they lay:
White egg: 55 Flowery
Beige/tinted egg: Smaaland
Green-blue egg: Cream Legbar
Blue egg: Ameraucana
Green egg: Olive Egger and Isbar (Silverudd Blues)
With regard to cold, the 2 dual-purpose olive eggers I "inherited" seem to handle the snow better than my layers. (My layers sometimes fly from point to point to cross an area of snow.) It's probably just because the dual-purpose birds have more mass and a thicker fat layer.
I am very fond of my sole Ameraucana but she doesn't lay very many eggs. The Cream Legbars, Smaalands, and Isbars lay a good number of eggs. And the Cream Legbars are the most personable of the bunch (or just the bravest when it comes to the possibility of treats). The 55s have a tendency to lay their eggs in what I call "unauthorized nests". (Since mine have a lot of free range space, the daily Easter egg hunt gets old.) In my opinion, the Isbars are the prettiest.
Hope this helps. Good luck!

Bumping up this thread for updates!

As written last year, I'd wanted nice, calm, cold hardy breeds that laid a minimum of 150 eggs/year, preferably equipped with pea, rose, cushion or walnut combs. Single combs were my last choice if I could not find breeds that laid colorful eggs with the above-mentioned comb type. Different plumage colors also became a must later on, as I did not want all my hens to have the same color palette.

A few of the breeds mentioned in older posts are unavailable in my area. The others can only be found at Performance Poultry as far as I'm aware, and the driving distance is too big for me to go fetch the chicks there. I might be able to get shipped eggs of all the above breeds, but the price for that is more than my tiny wallet can handle, since they would be coming from quite a distance. I'll have to pass on these alluring breeds to contend locally. Upon closer inspection of the Wyandotte breed, the chemistry did not pass, either, so I let it go... for now. I might try it again later.

White Chanteclers and Speckled Sussex are two breeds I bought some eggs from, but they did not hatch for the former and only cockerels got out of the latter (the incubation did not go well). Thankfully one sex-linked Sussex pullet made it out of her egg (the cross was done purely to obtain a Colombian Buff plumage), so I still have my beige eggs. The hen is friendly, but does not like to be handled despite being hand-raised.

That's why I've gone for its rival the autosexable Cream Crested Legbar. Again, the green color seems to dominate the blue one in people's backyards of my area. I have hope, however, that at least one of the two hens I have will lay blue eggs, as their breeder had brought new blood into his stock, which laid blue eggs instead of green ones. Personality-wise, one Legbar hen is entirely unafraid of me, and very friendly. She is quickly becoming my favorite girl. My CCL rooster is also very calm and gentle, two more points for the breed in general.

The Plymouth I found for brown eggs is a true godsend. Very curious, sociable, almost unafraid of me, and quite eager for treats and new things to look up, she is always near the coop door when I arrive, and will fly up to the perch nearest to where I am to see what I am doing - and what treats I'm carrying. Her clucks and noises never fail to make me laugh, and she is my steadiest egg layer, as well. I'm very happy with this breed so far.

As for my chocolate brown egg-layer, I chose the Welsumer over the Marans primarily because of its clean legs. It rains alot in my area, which would mean easily soiled feet for a Marans, plus an invitation for scaly leg mites. Putting a Welsumer in the coop decreases these problems quite a bit, so I'll stick with that breed for now. The only downside is that the hen I currently have doesn't seem in a hurry to start laying xD

The Easter Eggers were an early, unexpected gift. I hadn't expected the chicks at all, but the emergency chick-rearing crash-course they gave me is something I am grateful for. True to their mixed heritage, they were very sturdy from the start, and had tempers to match their wits. One lays green eggs; the other is dormant. Both have dominant temperaments, which makes for quite the lively ambiance inside the coop.

In general, my favorite breeds right now are the Cream Crested Legbar and Plymouth. Both are cold hardy, have friendly personalities, and surprisingly don't seem bothered by the cold and high humidity (70-78%) despite having single combs. One of them is also laying right now, so I have at least one proven winter layer. The potential for making autosexed green egg-layers by mixing the two breeds together is appealing, as well. For these reasons, I might stick to the Cream Crested Legbar and the Plymouth for my future blue and brown eggs.

May this update help those who are looking to have rainbow eggs in northern climates! Good luck guys, and happy early New Year!