Look at those nuggets! Yeah they're ready for the brooder, it won't hurt to open the incubator quickly to take em out and then it'll be easier to see what's going on.
What breed are you hatching here?
J

Yes today is day 21. I'm fixing to get them out. I just wanted to wait for the pipped eggs to hatch so they wouldn't shrink wrap. Looks like there are 3 eggs left that haven't externally pipped. When I get the chicks out I will candle them to see if they are internally pipped, if I can tell since this is new to me.

Those are my white leghorns.

Yeah, excellent! Sounds like you have a good plan.
J

I candled them but really don't know what exactly to look for. These are on day 21. Here is what the air cells look like. 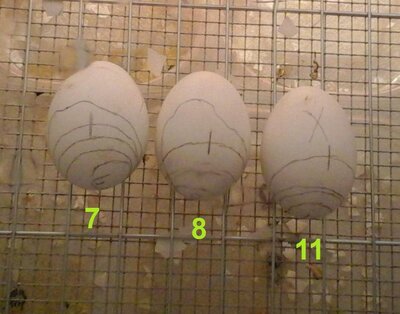 Do the air cells move when you lay them on their side from being in an egg turner like that?

I didn't see anything dark in any of the air cells so i assume there is no head and haven't internally pipped. Just a clear white air cell is all I seen.

I didn't see any movement but I don't know if there would be any or not if they are filling up the shell at this stage.

#7 and #8 is completely dark below the air cell like there is a would be chick blocking all the light. #11 has a big clear spot and looks like a liquid in it. This is what #11 looks like. 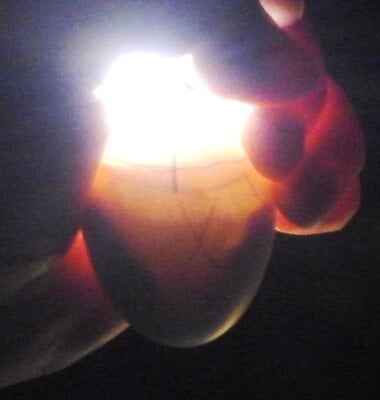 What looks viable and what does not?

7 and 8 sound like they could still be on their way. Concerning that they haven't pipped internally yet- you'd know if they had, they don't like being picked up and will let you know! Might be malpositioned, with the head stuck in a position where they can't pip, I've seen that happen where the head stays down between the feet instead of tucking up under the wing like it should(I don't know what to do about it, I had two in the same hatch like that and I lost em both). Or they might just be taking their time. It's very hard to see veins or movement at this stage. I'd give them another day, see if maybe there was a cool spot in your incubator or something.

11 is dead. If you're interested in seeing if you can discern what happened, you can open it up. When you get liquid like that with no veins, that's a sure sign tho.

with how little the air cell went down, that could also be a malposition with the head at the small end of the egg, but lots of chicks hatch fine like that so it could also be something else.
J

I cracked #11 open and I didnt' see anything wrong with it. It appears it just died.

The membrane was still stuck to the shell. It looked fully formed with a good sized yolk sack. Beak was under wing. It was in the right position to pip.

It's hard to say, then. There's a few things that are associated with specific issues-- malpositions are often related to turning or even storage before incubation, certain deformities are caused by early incubation temperature spikes,others are genetic. Sometimes extra liquid suggests drowning. Could be something invisible, either genetic or related to the health or nutrition of the parent flock. Sounds like the hatch went pretty well overall, so I wouldn't stress about it. Last three days and first week are the most common for incubation losses.
J

Yes it went very good overall. I set 24 eggs and hatched 19. One was infertile and I lost one in a few days to a blood ring. 79% hatch rate.
J

I decided to crack open #7 and #8. They were both fully formed, dead, and malpositioned. Their beaks were pointed towards the bottom instead of the top so they were 180 degrees off. Could that have happened from the chicks rolling the eggs around? There were a couple that got rolled over on their top and layed there but not sure exactly which ones.

I suppose that explains why the air cell dropped down like it did. The air cell looks like it got pulled off the egg wall by what I would assume was the chick drowning or struggling. 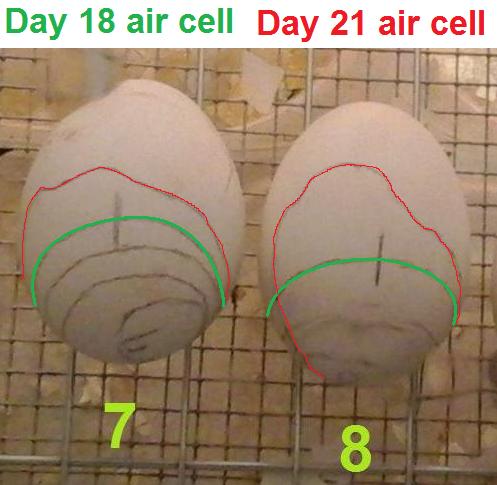 Head down between the legs? That's the position all chicks are in before they move to the hatching position, so that's where things went wrong. I've never seen a scientific explanation of it, but it would have happened/not happened before any other eggs hatched so not that. But something glitching right around day 17, for sure. The time I had that happen to two eggs in my hatch, it was the two smallest eggs, so I wondered if the embryos hadn't grown too quickly and not had the space to reposition, but I've never seen anything to back up that theory.

There was a post I saw from someone a while back who had a lot of losses to that issue, like a concerning %age of the hatch, but I don't think they ever figured out a reason.
You must log in or register to reply here.
Share:
Reddit Pinterest Tumblr WhatsApp Email Link