I bought Baal from the breeder on Nov. 28 of 2009. I put Baals papers in a drawr and forgot about them but just now found them.
If I am correct I have 12 months to send them in from his birthdate. Anyone know any different?
Id like to get them in ASAP.
He is a German Shepherd Dog


I have to pick a name.
"Choose a unique name. Names are subject to AKC approval."

His parents have boring names so I dont want to paly off them..
Here is the meaning of Baal:
(1) A Northwest Semitic title and honorific meaning "master" or "lord"[1] that is used for various gods who were patrons of cities in the Levant, cognate to Akkadian Bēlu. A Baalist or Baalite means a worshipper of Baal.
"Ba‛al" can refer to any god and even to human officials; in some texts it is used as a substitute for Hadad, a god of the rain, thunder, fertility and agriculture, and the lord of Heaven.

(2) Christian demonology:
Is one of the seven princes of Hell. Was ranked as the first and principal king in Hell, ruling over the East.
Baal was either compared to Satan or considered his main assistant. According to Francis Barrett, he has the power to make those who invoke him invisible, and to some other demonologists his power is stronger in October. According to some sources, he can make people wise, speaks hoarsely, and carries ashes in his pocket. 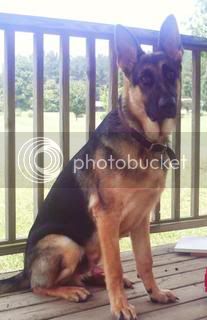 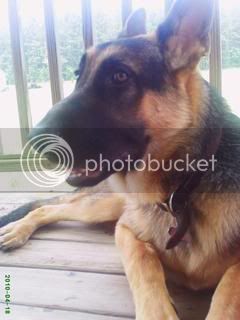 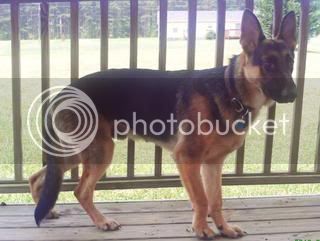 I think if just costs more if you wait longer to get them sent in. What kind of dog is he? I think pics would be helpful

You have a year with AKC from the time they are issued their registration packets. If not there is an additional fee of 35.00 plus additional costs if over two years added on.

Can't help you with the name, pictures and lineage would help.

The last AKC dog we had was already 5 years old so he kept his name. Our first we named Colonel Anwar. His dad was a general and he couldn't outrank his dad. lol
Since you didn't get him from a show or working kennel then for a name anything goes.

You don't have to put Ba'al in his AKC name either if there is something special you want.
But I would search around on pedigree database sites to see if the name you like has been taken.

I really like Baal myself and would like to be counted in.
He does have very good bloodlines so Im told (by someone other than the breeder

Here is is grandfather on his sires side:
http://www.pedigreedatabase.com/gsd/pedigree/618897.html

and his grandmother on his sires side:
http://www.pedigreedatabase.com/gsd/pedigree/179618.html

OK, not very creative but what about Baal vom (insert your last name here) haus. Baal from smith (or whomever) home.

Quote:
lol I mean Ive tried to play my last name into it but it just doesnt sound good...
I want a dominating name..
One that will strike fear into peoples hearts when they hear it
....or something like that

Personally I think his name already is scary and rather dark I always just use the kennel and parent connection when registering my dogs. I am sure someone else will hook you up with better suggestions!
Baal von dunkles Blut (Baal from dark blood)
Last edited: Jun 10, 2010

my parents always named dogs with their last name then dogs family name... to use the last name smith as an example for our old lab,