Anybody seen these problems correct themselves?

I hatched two chicks that had/have some problems. Anybody else ever experience these things and have them turn out okay? First, one chick hatched and there was a huge bulge down around his bottom as if all his innards were on the outside. It wasn't the yolk - that was hanging out there too, behind and beyond this other bulge. He just layed there overnight, and couldn't move around at all. But then today, I realized that it was sort of reabsorbing into it's body. The giant bulge got smaller and smaller and now you'd never know it had been there - except the chick is still quite weak and though it can roll and scoot around now, it can't really sit up on it's own or walk yet. I had it pegged for dead before, but it's shown so much improvement, now I'm not sure. The other problem chick pipped and zipped and then never climbed out of the shell. It would wiggle and squiggle, but seemed unable to climb out. Finally I reached in and "poured" it out. Well, then the problem became obvious. He's got one bum leg. He can move it, but he just can't get it up under himself to balance. If I help put the leg into position, he can sit up and stand there just fine, but if someone bumps him, he goes tumbling and that leg sprawls out behind him. I left both these chicks in the bator all day so that they could try to work out their issues without the interference of the others, but now I've moved them to the brooder too - I just put them into a little plastic shoebox to keep them separate from their sibs. I plan to keep working on some physical therapy with them

. They both seem like tough little fighters, so as long as they're willing to keep trying, I'm willing to help them out. Anybody have any thoughts on the likelihood they'll make it?

Sounds like on the second chick you are dealing with spraddle leg. It can be fixed. You can take a band-aid and make a hobble.
Here's a chick we had who had spraddle leg. He did very well with the hobble and I imagine would have grown up to be just fine. Unfortunately we found him drowned in the waterer,

that's why we put marbles in the waterer now. 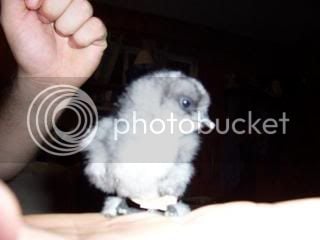 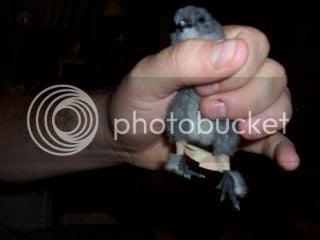 I don't know what to say about your other chick, other then good luck and I hope she makes it!

Yes, yes, yes! I KNEW there had to be a way to "splint" it. I just didn't think about taping to the other leg, and couldn't figure out what would work. Thank you! I bet that'll do it! Spraddle leg is what it's called, eh? The name sure fits. That's gotta be it!

I still can't believe how the other one has improved. Truly amazing. I wish I had taken pictures of him before and now. That's definitely one tough chick!

Edited to add: My spraddle leg one is a silkie too. Is that common for the breed, or is it just a coincidence that yours was too (at least I'm assuming from your picture that it was a silkie)?
Last edited: Mar 22, 2008

Well, bracing the legs has done wonders for the one with the crazy leg. He's bee-bopping around like a little pro now. And he's getting so much attention that he's probably going to be the most tame chicken you ever saw. Unfortunately, the one with the belly-bulge didn't make it. Poor little guy.

aww that is so sad im really sorry abou tthe chic but at least your other one is doing good.

I had a chick that did the same thing. (See my post)
I seems to be fine now. That thing is only out a wee bit. And everything else is dried up and gone. He is sleeping now, but just a little sound from me and he is up and moving!

I had one of my chicks hatch out with the problem that you chick number 1 had and it is doing really well. It started out kind of slow the first couple of days but did reabsorb the part sticking out and it is now just like the others. I think that nub is called a rough navel.
Good Luck and Happy Easter!

B
WHOOP! Chicks hatching before I was ready!