I started my chicken experience in September 2019 when I received 7 ISA Hybrids as 19 week old ready to lay pullets. In early October my sister hatched eight Ameraucana mix chicks from eggs she brought to me from a friend on Vancouver Island. From these eight I ended up with four pullets and a cockerel giving me a total of 12 birds that today give me 8-11 eggs per day and a great deal of pleasure from watching, caring and eating a variety of egg dishes that I find in books, online or through experimentation.

The pleasures I received led to an interest in White Chanteclers a breed originally developed by a Trappist monk in Oka Quebec. These are the one of two APA registered Canadian breeds and was the first being developed in the period 1908-1918 and registered in 1921. Reasons for my interest include:
I have tracked down a breeder of pure White Chanteclers near Granby, Quebec (three hours from me and just south of Montreal), have spoken with him several times and will do a day trip this week to pick up 48 fertilized eggs. Will incubate with hopes of ending up with a single cockerel and about a dozen pullets

While pondering this move I realized that I would either have to get rid of Lestor my current male (a magnificent gentleman who manages his ladies extremely well while first checking things out then standing back while they dig in) OR build another coop to segregate the Chanteclers so as to maintain their purity of breed. I have chosen the latter course and will build a second, smaller 8' by 12' Woods KD style coop to match my current larger (10' by 16') one.
Since i want to take advantage of the Chantecler's reputation as good brood and mother hens I will augment the underneath space to include a floor level nest box using ideas from @aart and/or @jthornton (details yet to be sorted out but I want to produce chicks/laying hens for re-sale in my local area).

There will however be a major departure: I will build the new coop on a converted camper trailer so that it is both moveable and easily transportable should I ever decide to sell it. Not my idea, I must credit @ColoradoPip for that.

To accomplish this I have been watching Kijiji for an appropriate ``platform``. I have looked at house trailer axles and at both old camping and utility trailers for something CHEAP! Patience pays off.

A back neighbour was up for the first time this year and I stopped over to say hello. In conversation I told him of my intentions where upon he asked if I had "looked at the trailer leaning against the tree outside?". I had not so we go outside and have a look.

It is PERFECT platform for the build: 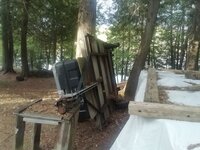 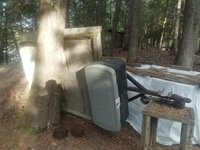 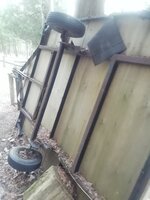 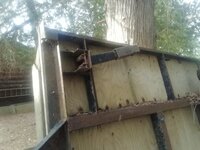 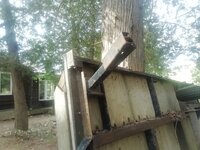 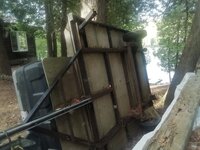 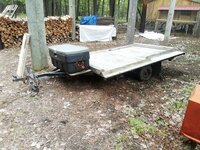 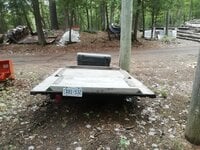 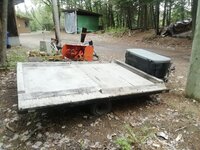 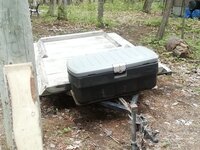 I have previously purchased all the 1" by 6" pine boards and 2" by 1/2" battens. Today I ordered 6`by 6`hemlock beams for the major structural base and the 2" by 3" framing materials. Now on the prowl for used roofing tin that I will prime and paint in bright red. Target cost is under $1000 Canadian!!
Last edited: May 26, 2020

There will be some delay before I start the actual build. I am otherwise very busy and will have to do this in after hours once the balance of my base and framing wood arrives.

Must admit I am more excited about this build than the first larger one.

No worries or hurries.

Ted Brown said:
I came away with 62 fertilized and documented eggs with his handwritten notes regarding parentage of each.
Click to expand...

Better get busy on that coop!

aart said:
Better get busy on that coop!

How exciting!
I’m a fellow Canadian now living in Tennessee. I miss our winters!
Good luck with your birds and build. Sounds like you have a great plan.
Diane

aart said:
Better get busy on that coop! 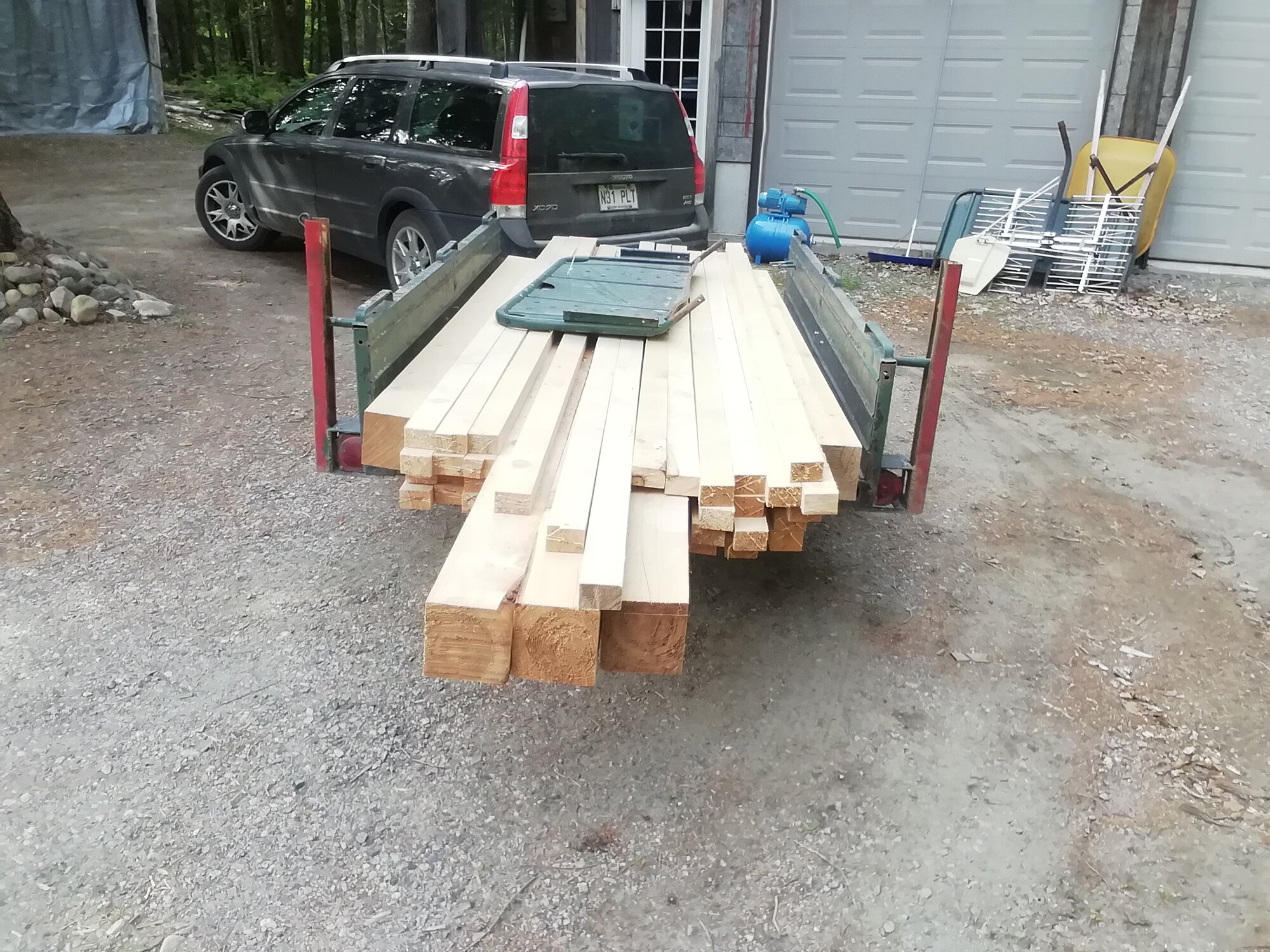 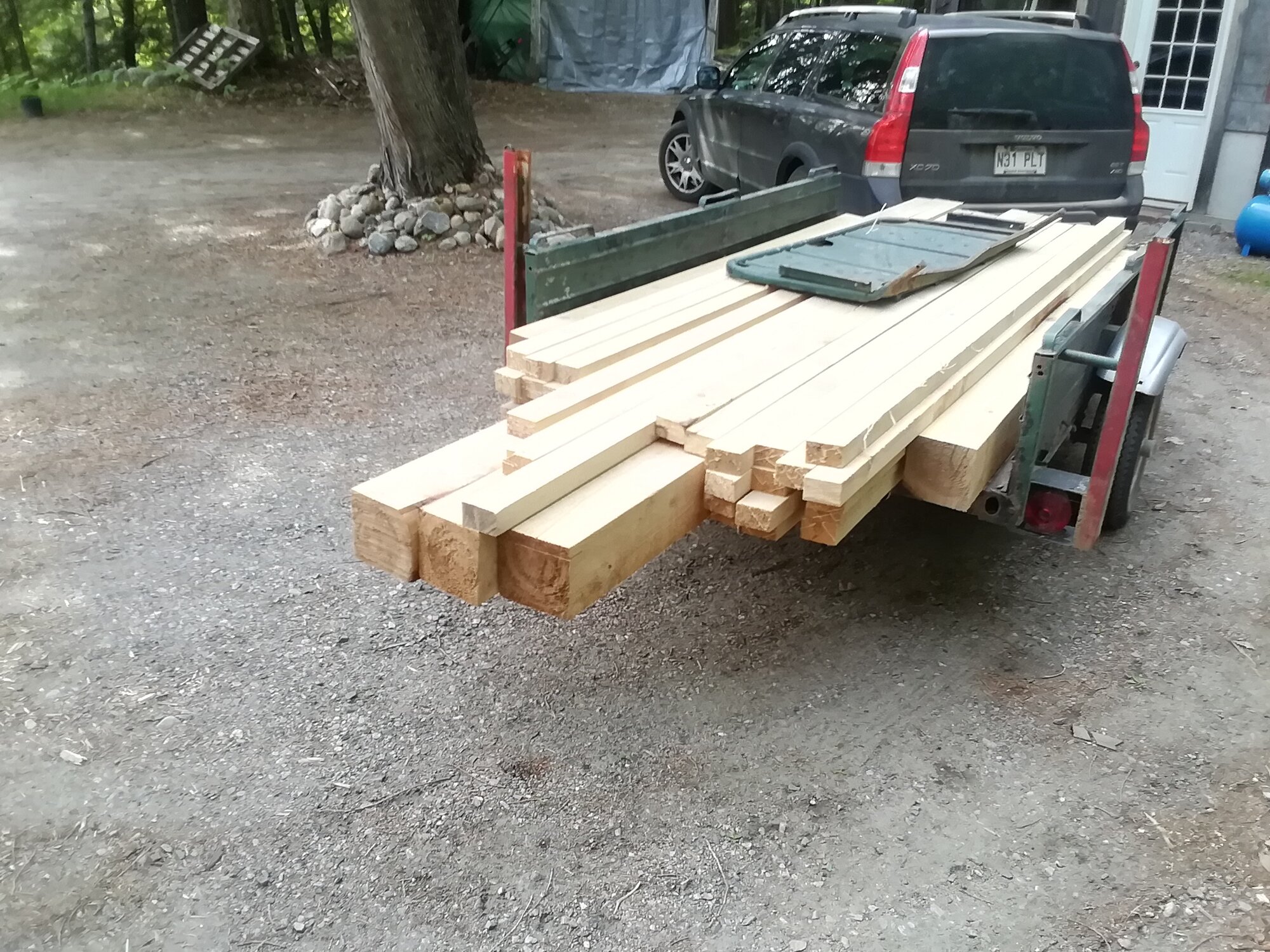 I am otherwise busy so getting time to work on Coop2 is about a few hours at the end of some days. I need to step up the pace, started today by stripping the trailer to it's steel frame. I have a flat tire that needs to get fixed and one of the lights is broken so will need to replace that as well.

The frame is 8' long and the "V" at the front adds a bit more than 2'; width is 6' 7". The Coop will be 8' by 12' so I will build a frame out of 6" by 6" hemlock beams that will sit on top of the trailer frame; overhangs will be 2' feet at the back and 8.5" on each side. I will notch the beams where necessary and then bolt them together using steel threaded rod, washers and nuts.

I will build the coop in panels the same as I did for the first Woods, this build should be quicker as it is smaller and I have done it once already. I have set a tentative finish date of end of July but as I said above I am busy with another project (12' by 30' foot extension to a cabin across the lake). End of July will mean hard discipline, time management and no goofing off! 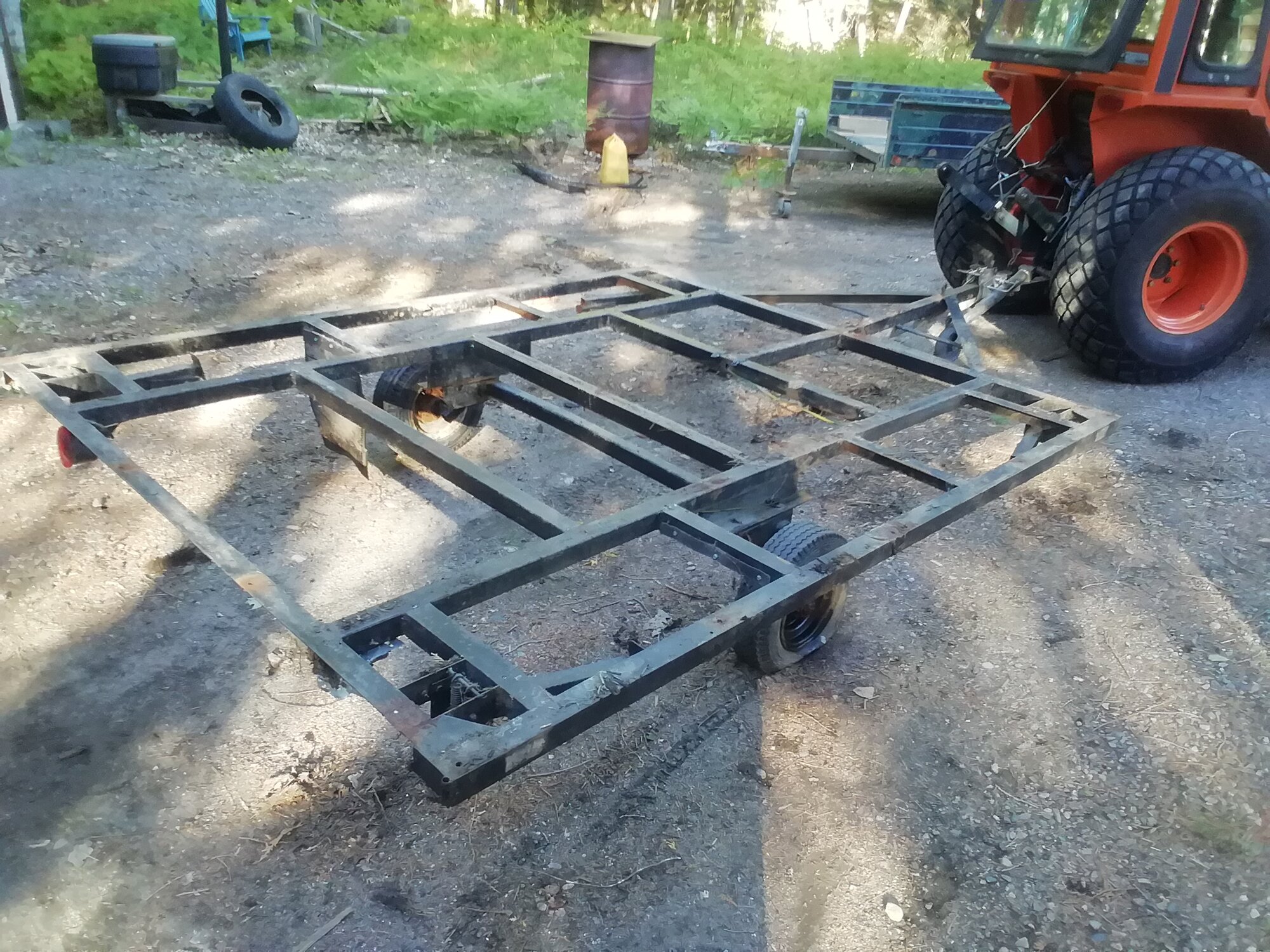 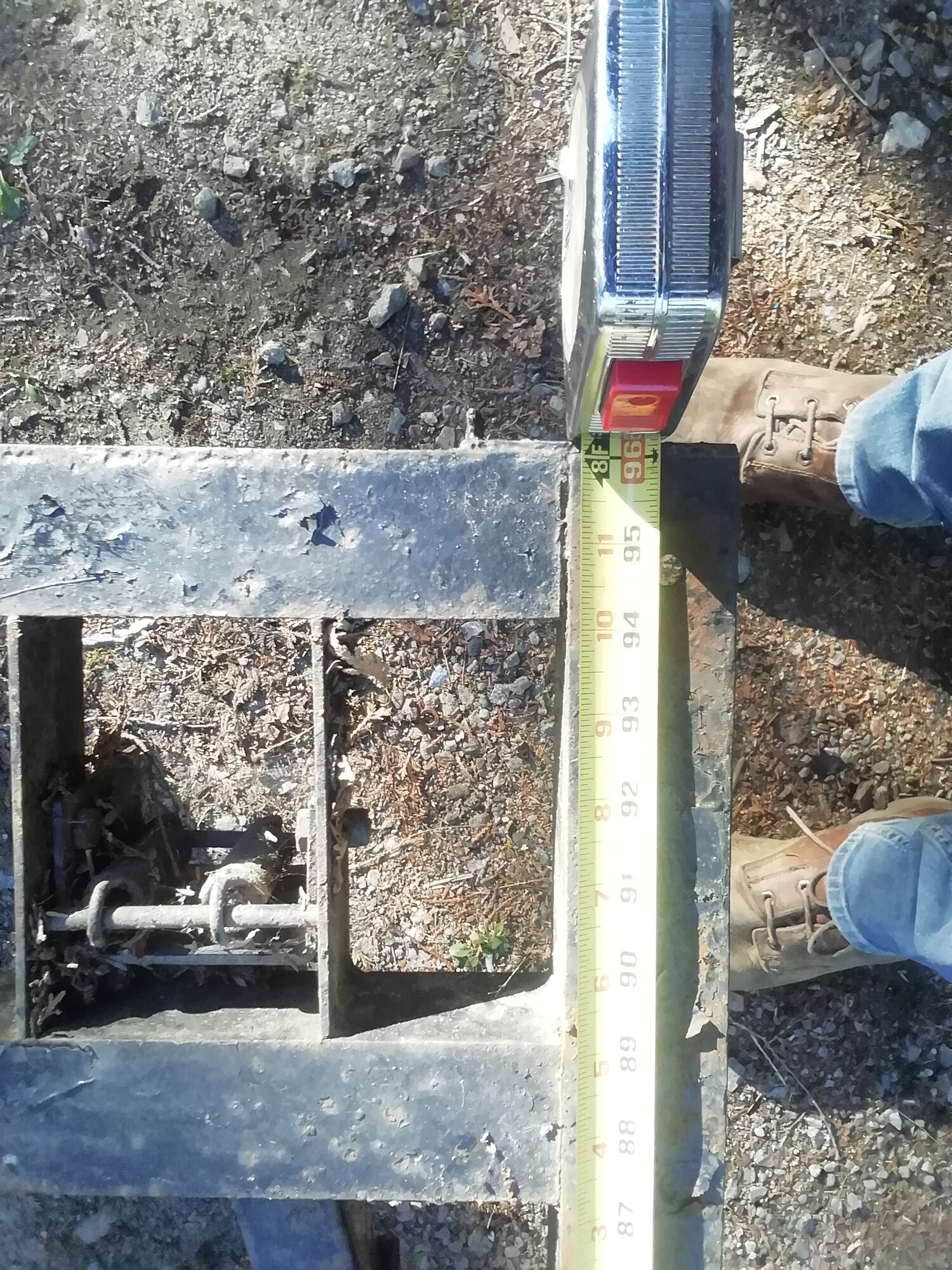 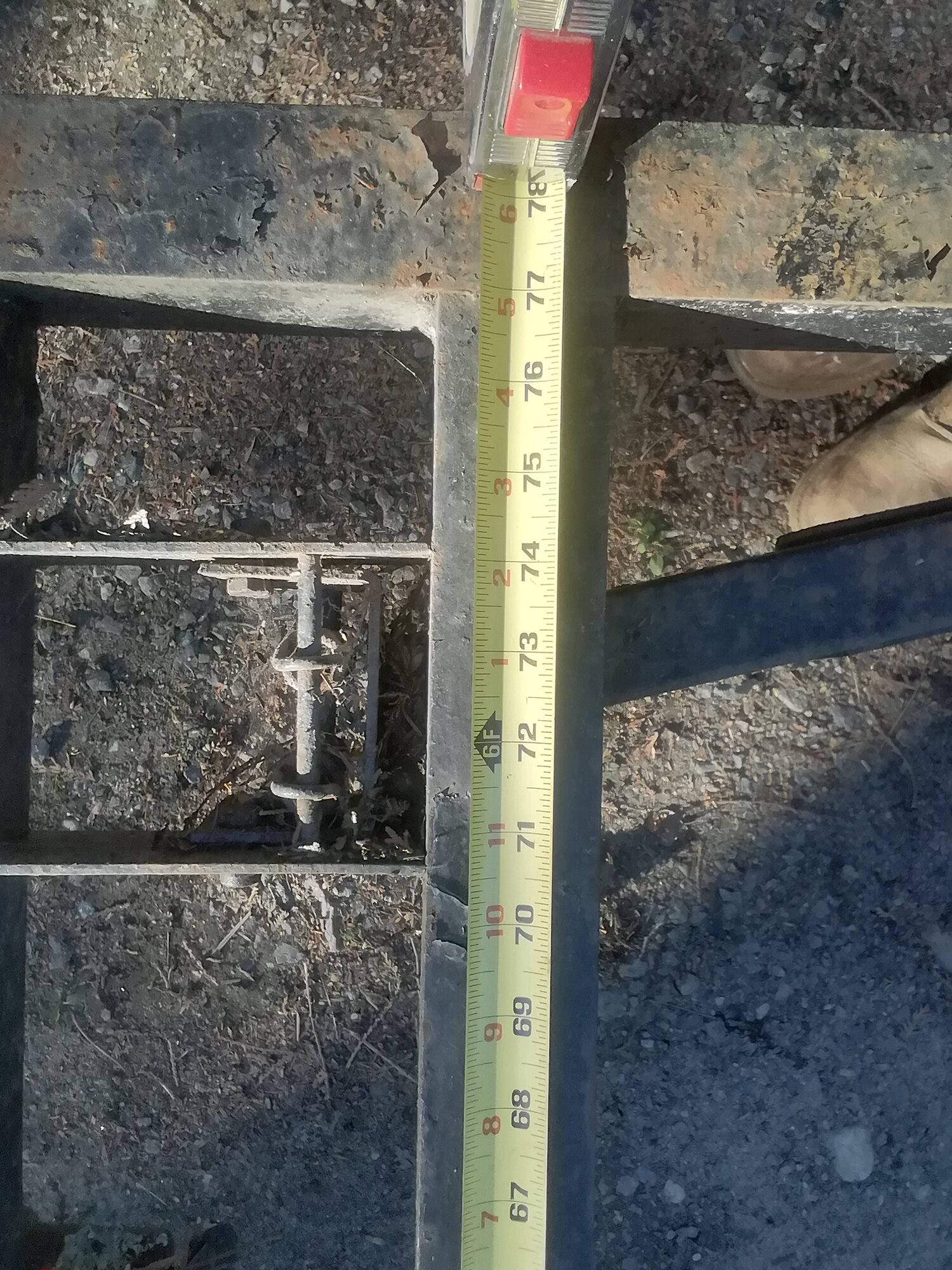 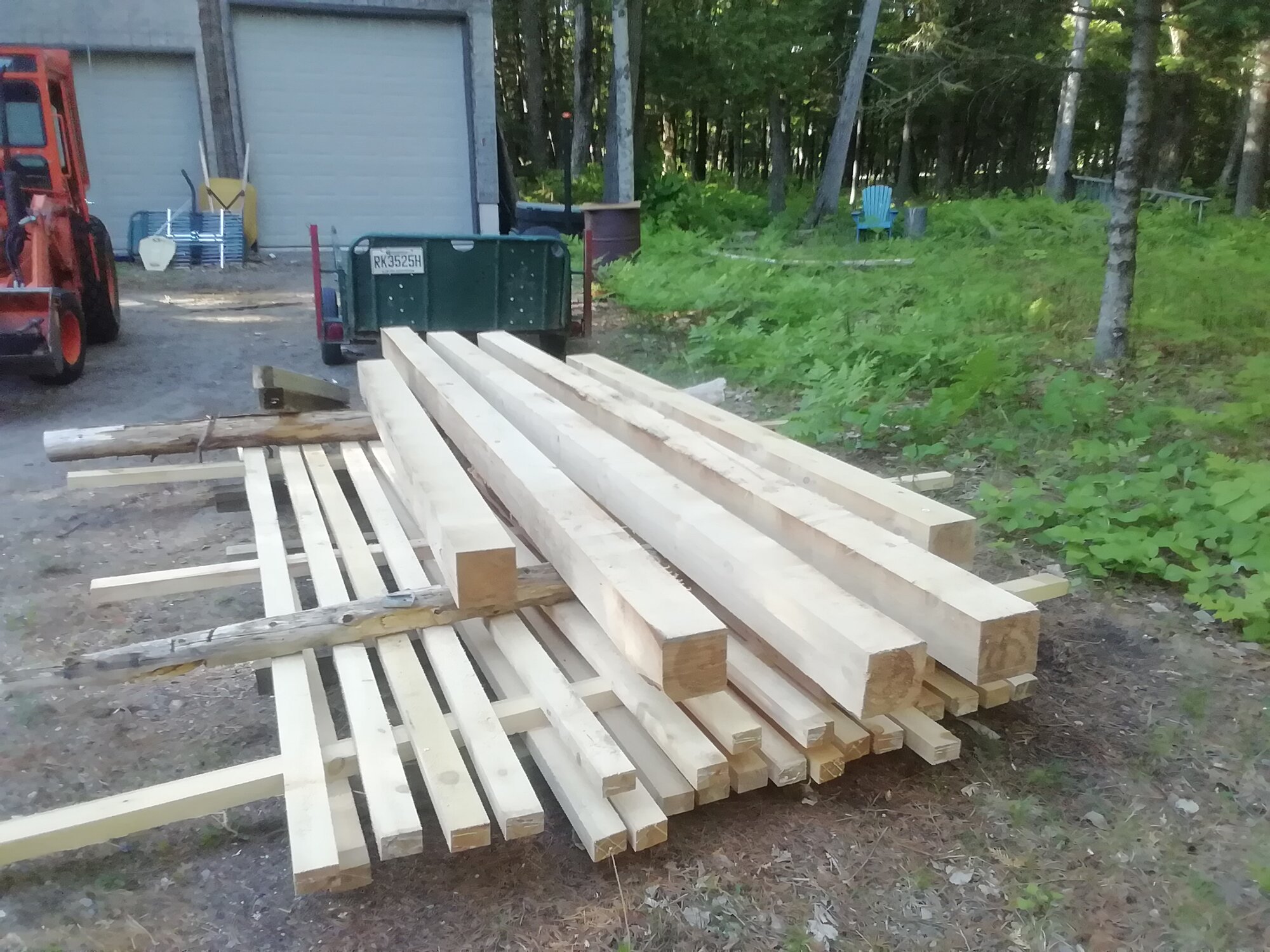 The two of you were 1999 and 2000 on my reactions score! Very appropriate I think, thanks.