Right now I'm most concerned about the chick not really eating. Today is its 3rd day, so it has been around 60 hours since hatch. It does not eat and drink on its own but it will readily drink if I hold the water right in front of it. It will peck at food with encouragement but can't seem to grab and swallow any crumbs. I have tried a soft mash with no luck.

Now I am trying to give it some 100% nut peanut butter with no added salt sugar or oils. It is able to get some stuck in its beak and work at it until it goes down.

I'm just not ready to give up on the little guy yet because even though he is quite wobbly/weak, when he is awake he is very alert and vocal. If he would just start eating I would be more hopeful.

He looks much better than it sounded. Can you try feeding a little wet feed and a little boiled egg yolk? Have the shoes been on long enough to take them off? That might help him get around a bit better. Good luck.

Update on the little one:
I took the straightening shoes off and his feet are still half curled,about a 50% improvement but still not completely straight. I did not make new ones because it was obvious they were making him more clumsy and he kept tripping over and was unable to get back up. Without them he gets around very well. So I have left the shoes off for now.

He has been eating better today, tiny amounts of soft mash only when I feed him on my hand, but regularly. I am adding the vitamins to his food mash and water.

He seems overall much more active and interested in pecking at things today. I am getting a couple more chicks to keep him company on Thursday so hopefully he will eat better once he can copy them.

There are still two issues with him. The first is his 'knees' which will not straighten out and will probably never be normal, I guess. I don't know if they will cause his problems later as he grows.

The second issue that worries me more is his tremors/shaking. He starts shaking whilst walking or standing but doesn't seem to do it when resting/sleeping. I don't know what the cause of this is. The vitamin drops contain vitamins B2 B3 and vitamin E which I have read are potentially helpful.

By the way this chick is from half a dozen eBay eggs given to my broody. Only one made it to hatch. So I don't know if there could be a deficiency issue. I just assumed the problems were due to the repeated cooling of the eggs during incubation.

I'm sorry he's not doing too well. I think you are doing all you can for him.

Good news! The chick is doing so much better now.

Two days ago I got 2 x day old silkies and a Pekin Bantam chick to keep him company. I was happy to get younger chicks so that there was less chance of him being bullied by them, but I shouldn't have worried because he is very active now. His legs are still a bit too bent but his toes are much straighter now and his legs don't seem to hinder him at all anymore. He is fast as a rocket!

I think his tremors are getting less noticeable too.

I really thought this little one was not going to make it after he spent most of his first days upside down and shivering!

This was the little dude before I took off the second set of chick shoes today. 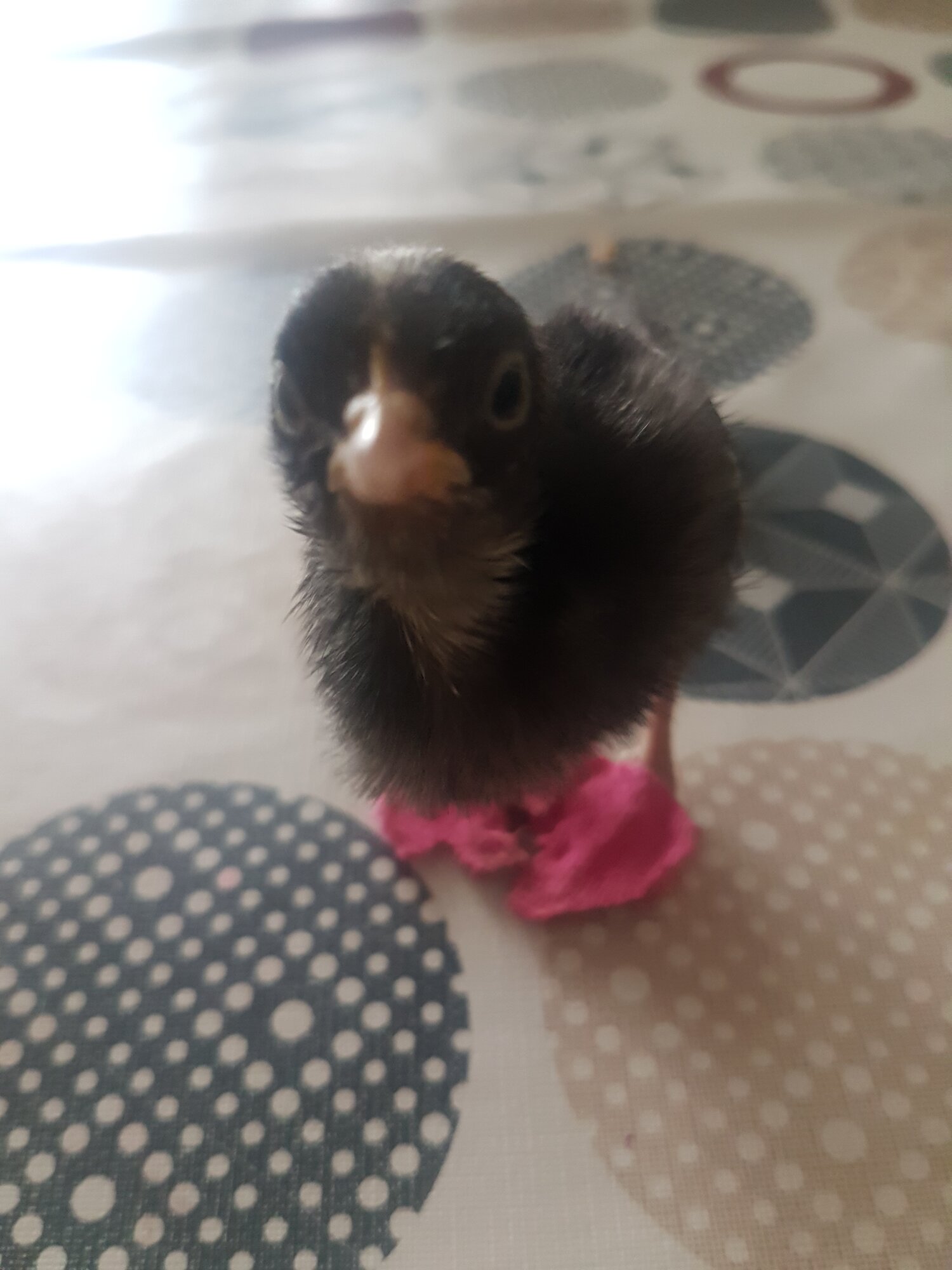 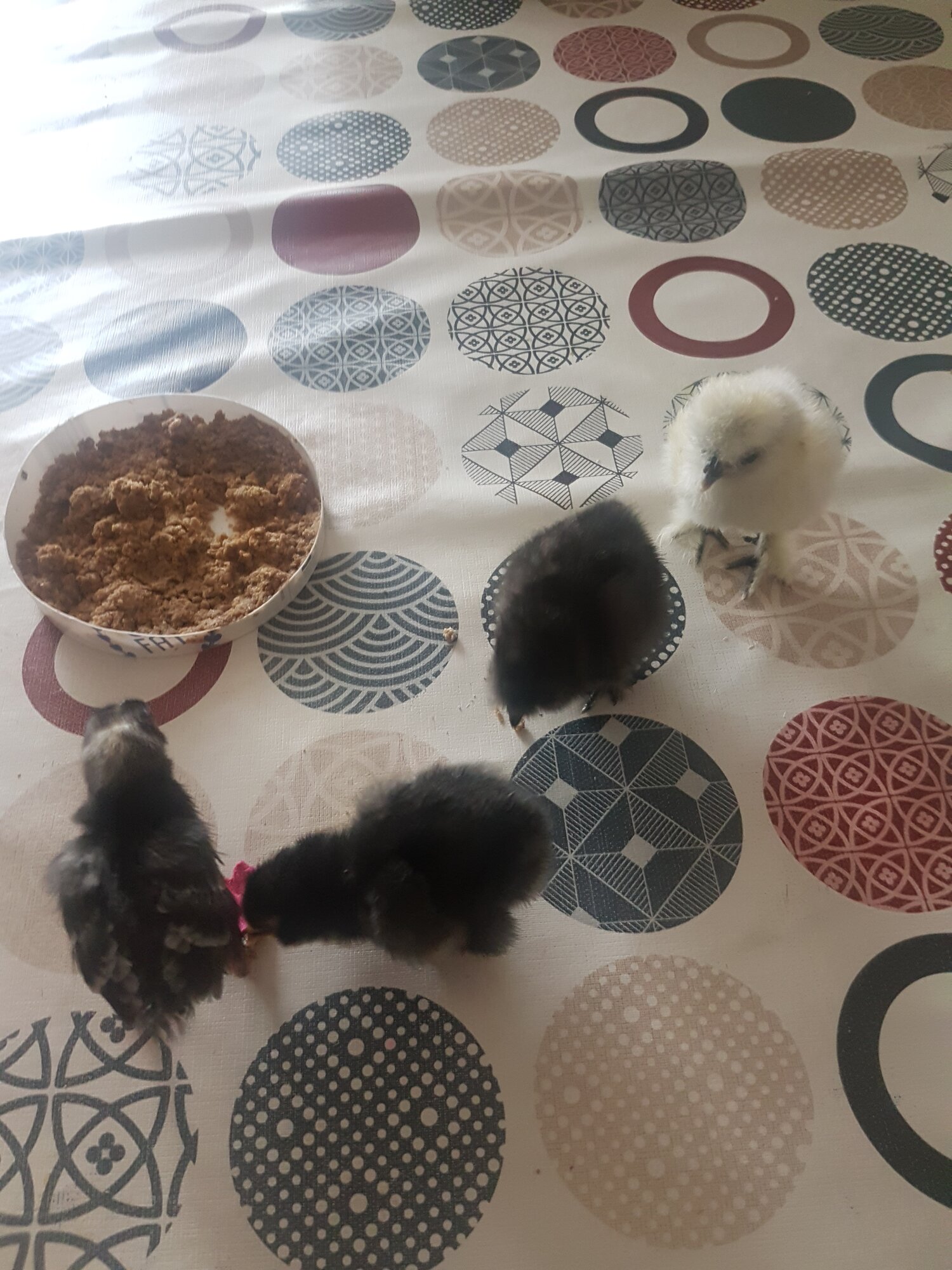 So glad that he is improving and has more company. Keep us posted on his progress.

The little baby who I have named Pip is doing well now. The tremors have stopped and he or she seems to behave like a normal chick.

Except for one thing... I have noticed for a while that he often scratches at his head/ear area. This seems to be becoming more frequent to the point that he does it every few seconds. His brooder mates are not doing it at all, so what could be the cause? See pic below for the scratching in action.

Glad that the baby chick has recovered. Check often for lice or mites on the skin, but chicks tend to scratch a bit while feathers are growing in. I would give a vitamin and mineral supplement a couple of days a week in case there is still some deficiency. They sometimes get certain elements from the soil and grass when free ranging. Dry skin from being inside might also be a problem. You probably have noticed all of the dander that chicks can produce.
You must log in or register to reply here.
Share:
Reddit Pinterest Tumblr WhatsApp Email Link