Hi there!
My parents have gone away for three weeks, and I've been house sitting and taking care of their dogs and baby chicks for them. The chicks were brought home from the local feed store on May 26th so the are about two weeks old now.

Anyhow, I noticed on Tuesday evening that one of the chicks was missing the very tip of her upper mandable. There was no bleeding or anything. At this point they were being kept in a small storage tote with their heat lamp, and they were jumping around quite a bit so I thought perhaps it was getting cramped and she just injured herself. I moved the baby chicks out to the coop.

When I checked on them last night, there were two other chicks with slightly chippy beaks, not as severe, and when I went out this morning, the breakage on both of them is worse. All of the other chicks seem to have either a white patch or a blood coloured spot at the tip of their beaks, and it seems that all of the breakages have been at about that mark.

I know chicks are supposed to lose their egg tooth, but I'm thinking this is not normal, and perhaps the chicks have some sort of deficiency. I'm not entirely sure what to do. This is only my parents second time raising chicks, and they have never experienced this before. I know quite a bit about birds, as I own a parrot and budgies myself, but I haven't been able to find much information online in regards to baby chicks beaks breaking.

Is their anything I can give them to prevent further breakage, and will I need to file their beaks and round them off as they grow back?

Other than that, they seem normal. They are eating and drinking regularly, growing very well, love to cuddle and are very curious and active. They are constantly trying to jump and run and flap their wings.

I've attached two photos, one is of a chick with a broken beak, and the other (With the chicks at the waterer) is to show the blood coloured tips of the chicks with intact beaks. 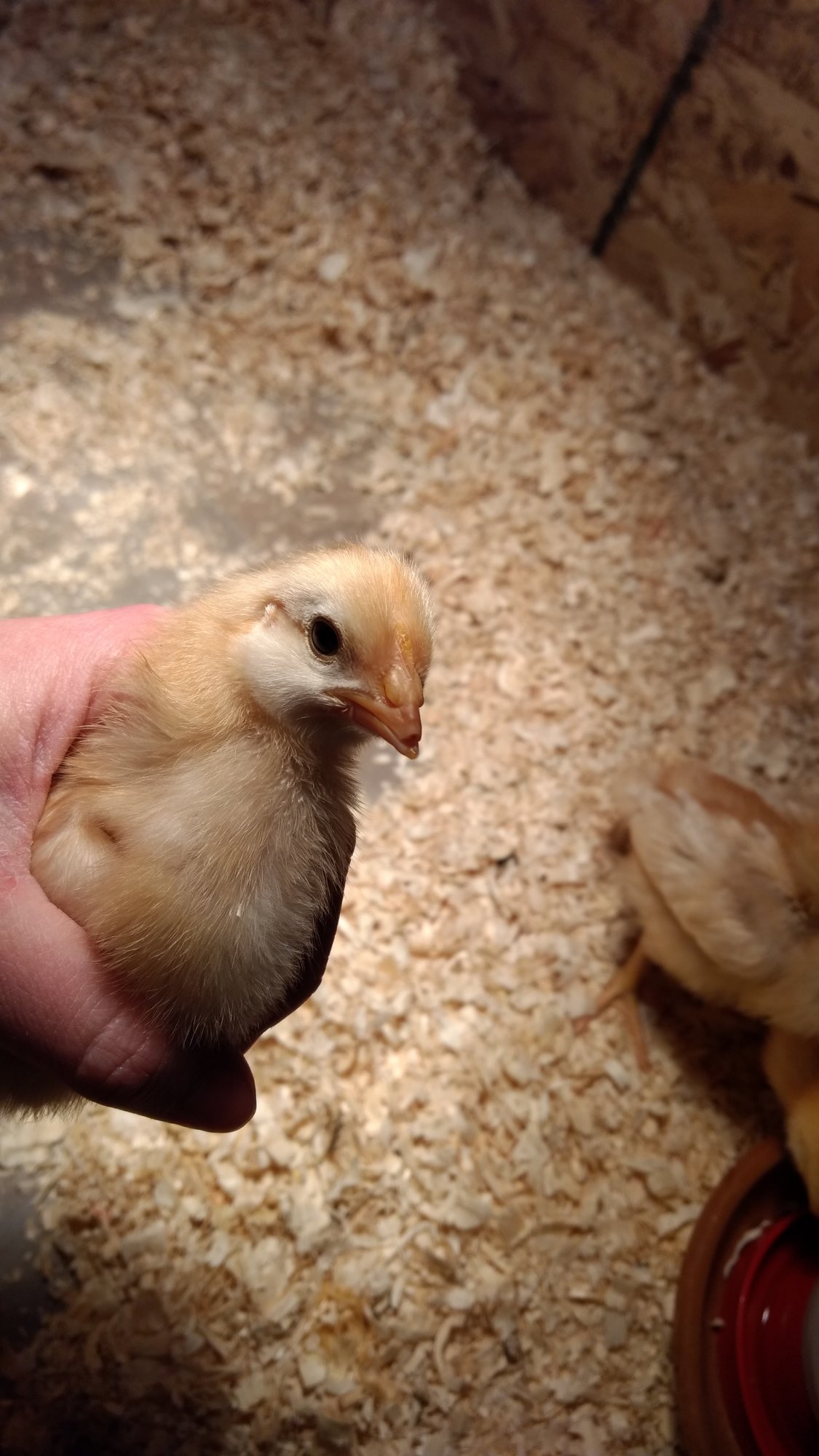 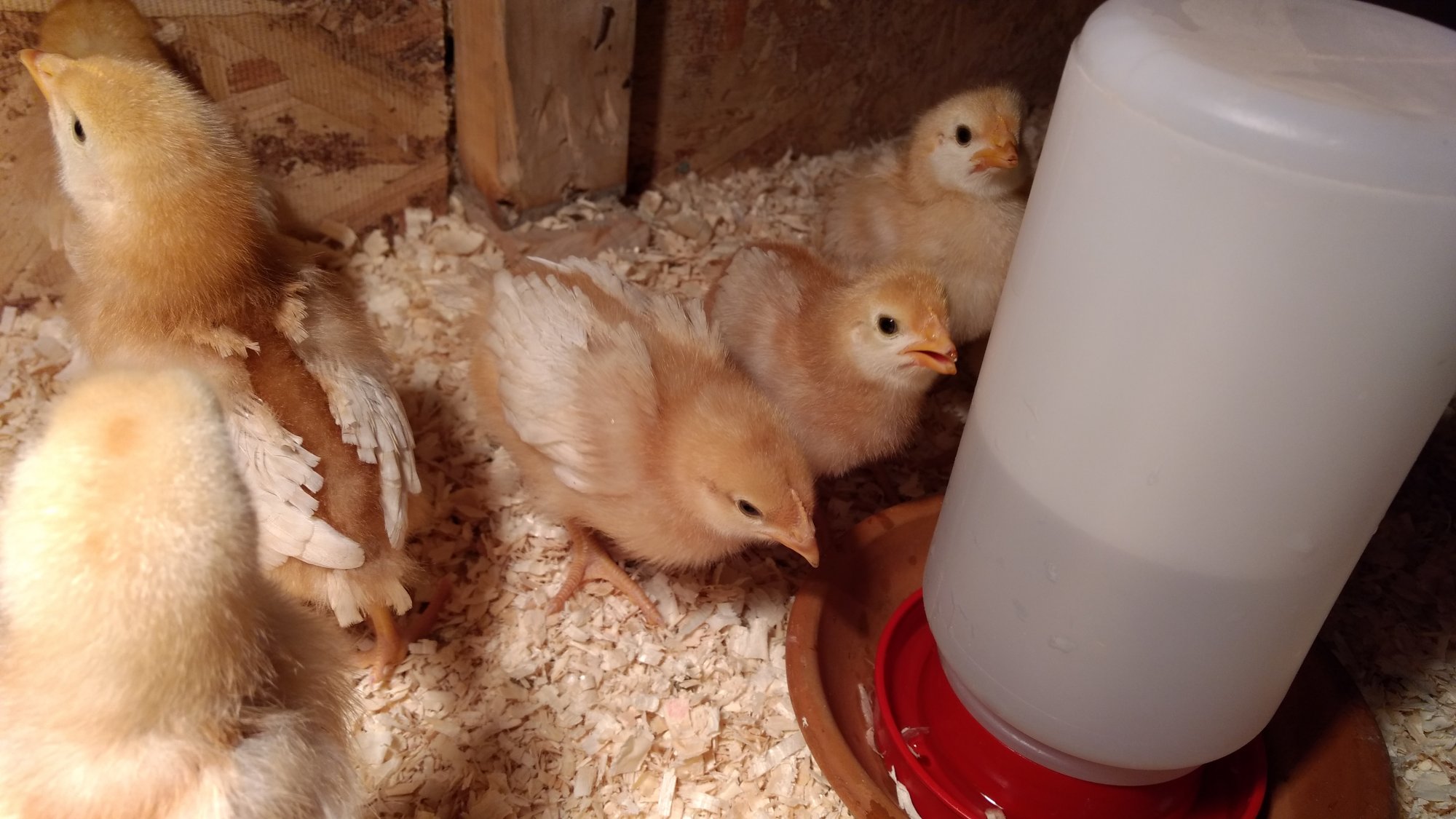 Anyways, if anyone has any advice for me, I would very much appreciate it!

Thanks so much,
Robyn
R

Forgot to mention, they are being fed a chick starter feed mix for chicks up to six weeks. It is supposed to be a complete formula, and is mixed up at the feed store, though I'm not sure of the ingredients.

Can you post some photos of the whole brooder, the water and feed station?

It looks like the chicks are getting their beaks caught in something that would cause them to break - any cracks/crevices in the brooder walls - any where they would stick a beak for it to get caught and break when they struggle?

I would leave the beaks alone and watch to see that they are drinking and eating well. If they have a hard time picking at the food because of the breakage, offer wet chick starter in a deeper dish so they can "scoop" the food.

Since they are so young, the upper beak will most likely grow out some, but in the future the lower portion may need to be trimmed or filed to match, but I would wait to see how it goes first - they have a lot of growing to do.

Thanks so much for your reply @Wyrop Rock So far, the chicks all seem to be eating fine, but I think I will offer them some wet starter, as you suggested. When I went out to get pictures, it seems more of them have their beaks chipping.

I noticed the first breakage when they were in a tote (pictured, though not set up. They were inside the house then, and now I'm just chucking their shavings in there) All they had in there was their feeder, waterer and a thermometer, so I have no idea what they would be getting their beaks caught on.

I've added some pictures of the coop. The sides are mostly chip board, and the chickies usually stay in the middle with their food and water. The only place where there is anything sharp is the chicken wire that lines that coop doors, and I'm certain that they aren't jumping that high or getting up there.

I'm also going to post more close up photos of some of the chicks beaks, so that you can see what the unbroken ends look like. They've always been white or had little blood spots since the day they were brought home, but they seem to be changing and getting bigger. Could it be a genetic defect? Or perhaps the chickens used for breeding were not in good condition and the babes have a deficiency?

I'm puzzled, and it seems like things just keep getting worse! I don't know what to do!

Also, it's worth mentioning, we've had baby chicks in this setup once before, and never had any issues like this!

Thanks for the photos.
@Eggcessive any input?

I do see what you are talking about now. To be honest, I don't know what would cause that. I'm guessing...genetic or possibly deficiency in parent stock. I would offer some poultry vitamins that contain Biotin, Vitamin D3 and B vitamins. Poultry Nutri-Drench would be a good start I suppose, you can also crush a human B-complex vitamin and add it to the feed daily.

I will be interested to see what others think. There's always lots to learn.

BTW the little chickies are just adorable. I like the coop space as well, nice roomy and clean

I know, I'm quite confused, and I've been pouring over internet articles and haven't been able to find anything like what is going on. Three of them now are missing the tips of their beak (Like the first photo I posted) and two more have little chips starting. I've contacted my Dad and he is going to try getting in touch with the feed store today to see if they have any input or have had any issues with other chicks.

In the meantime, thank you for your suggestions! I wasn't sure which vitamins would be good to offer for beak health, so I really appreciate that information and I will see if I can find somewhere locally that sells the Poultry Nurti-Drench, or at least some supplement containing the vitamins you mentioned.

They're so cute, aren't they? My Mom was going to name them when she got back, but I've already started, lol!! And thanks, my Dad and my Hubby worked together to design the coop. Its got an outdoor run too, for when the babies get bigger

I have a very similar situation going on with my one week old chicks. Did you ever discover the problem? We also have a plywood brooder and a very similar waterer. Did your chicks beaks grow back?

Pepper Key Stacie said:
I have a very similar situation going on with my one week old chicks. Did you ever discover the problem? We also have a plywood brooder and a very similar waterer. Did your chicks beaks grow back?
Click to expand...

This thread is from 2017 and the Original Poster has not be on since then, so unlikely they will reply to you.

Do you have photos of your chicks and setup?

Usually at a young age if beaks are broken like in the above photos, they will eventually grow.