We have a blue Americana whose behavior has changed dramatically since yesterday. I noticed last night she was roosting up on a piece of wood in the run instead of in the coop, but it was early evening, so I don’t know if she moved later or stayed out. When I opened the door to let them free range this morning, she didn’t come out with the others. She hung back in the run then reluctantly went out after everyone else had left. She’s typically active, but today she’s been standing around with her head tucked in and wings a bit droopy.

Over the past week, all 5 of our adult hens have basically stopped laying, but it’s probably been closer to 10 days since she’s laid. Based on their age and the fact there are a LOT of feathers on the ground in the run, I’m assuming they are starting their first real molting. (They started laying at the end of last summer and haven’t stopped since.) Some of the feathers do look like hers, but she doesn’t look very tattered. Could molting cause her to act so depressed?

I will say the flock has been through a lot of upheaval in the past month. We lost 13 birds including our rooster, 4 weeks ago today in a predator attack. We added 6 three month old pullets to the mix, but everyone seems to be getting along, and this hen is solidly in the middle of the pecking order of the adults. We also purchased some chicks, then dealt with an outbreak of coccidiosis in them. As a precaution, we treated our adult flock with CORID along with the babies in case it spread to the brooder through cross contamination. This hen and the rest of the flock have finished the dosage for severe outbreak and are on day 2 of the lower follow up dosage. Since it’s a mixed age flock, we are feeding chick starter/grower, with supplemental oyster shell and scratch grains.

Thoughts? Is different behavior normal for molting or am I just being paranoid?

Some do act off or sick when molting. It's usually one that is experiencing a hard molt. The other concern this time of year is they can get sick because of the changing weather conditions and temperatures, and migrating birds can bring in stuff. So watch for other signs of illness like sneezing, discharge, or runny droppings. If you are somewhere wet cocidiosis can flare up in the cool wet months.

Most my birds will exhibit at least a couple-few days of lethargy and isolation while molting.

I just found this thread after a search for behavior changes during molt. My oldest girls are 17 months old now. Out of the 5 of them, 1 SLWyandotte has finished molting, 1 Barred Rock has managed to get past the worst of it and is finally starting to get out and mingle like her usual self, the other SLWyandotte had a couple of days where she dropped feathers everywhere but she seems to be moving past the worst part, the other Barred Rock seems to be in the worst shape and while everyone was free ranging, I found her back in the run roosting and all puffed up (I'm a bit worried about this Barred Rock), & my Buff Orpington just drops a few feathers a day. My roosters have finished up molting and they didn't act unwell or any different at all so Sue (Barred Rock) has me worried. Did you see this in any of yours? Sue started dropping feathers yesterday afternoon and she's been dropping them like crazy

Sue is petite compared to my other LF hens and that's probably another reason that I'm worried. She has food in her crop and will take a treat from me, but I know that molting is hard on them, so she's got me worried

HeatherKellyB said:
My roosters have finished up molting and they didn't act unwell or any different at all so Sue (Barred Rock) has me worried. Did you see this in any of yours?
Click to expand...

Give her a few days.

aart said:
Most my birds will exhibit at least a couple-few days of lethargy and isolation while molting.
Click to expand...

Thank you @aart for your reply. I brought her inside because I wanted to get a look at her poop to make me feel better but that didn't really help. Does this look OK? She does have something in her crop and she will eat scratch and raisins (she doesn't get this often but since I was concerned, I wanted to make sure she'd take something). She is moving around more now that I have her inside. 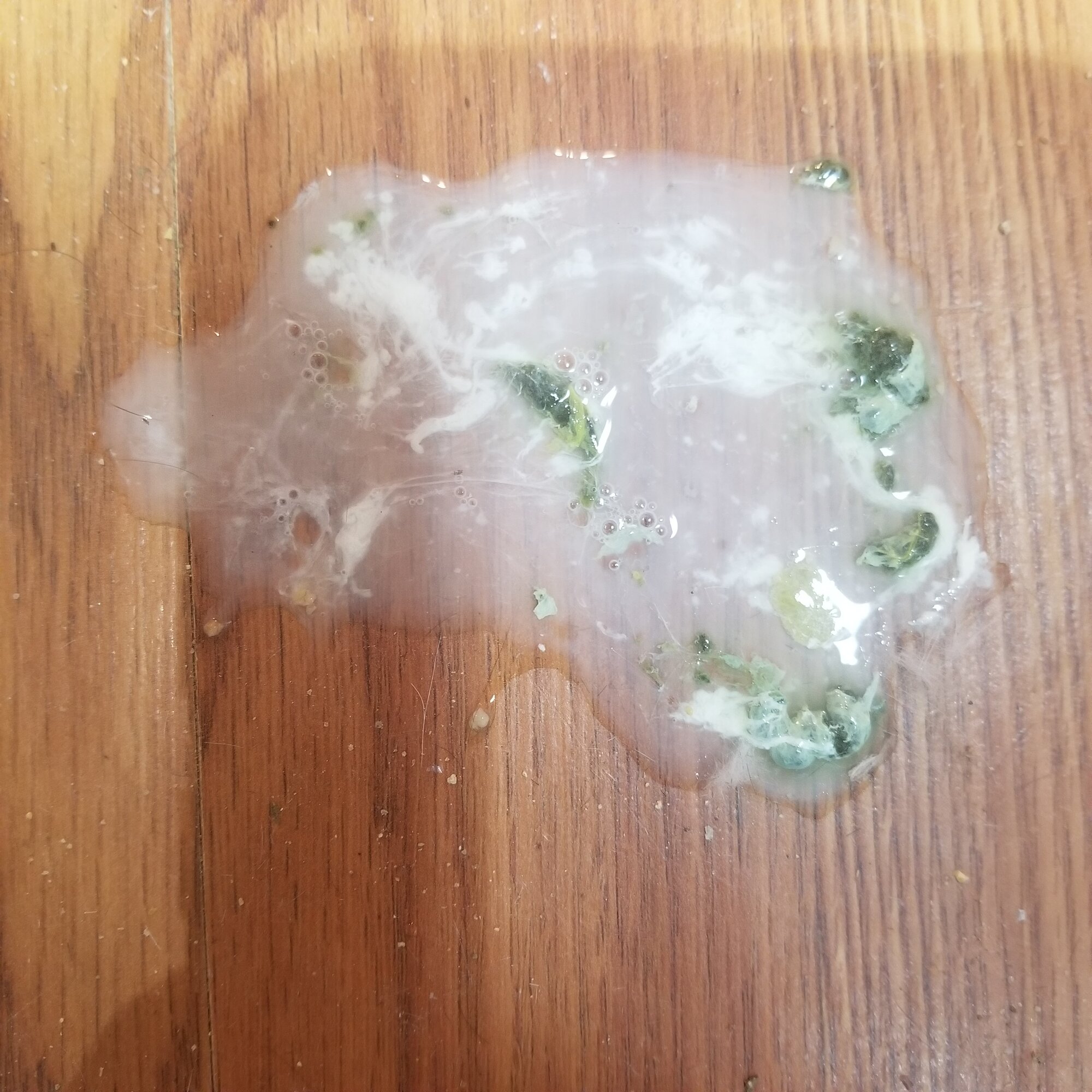 Same dropping wiped up and spread out a bit 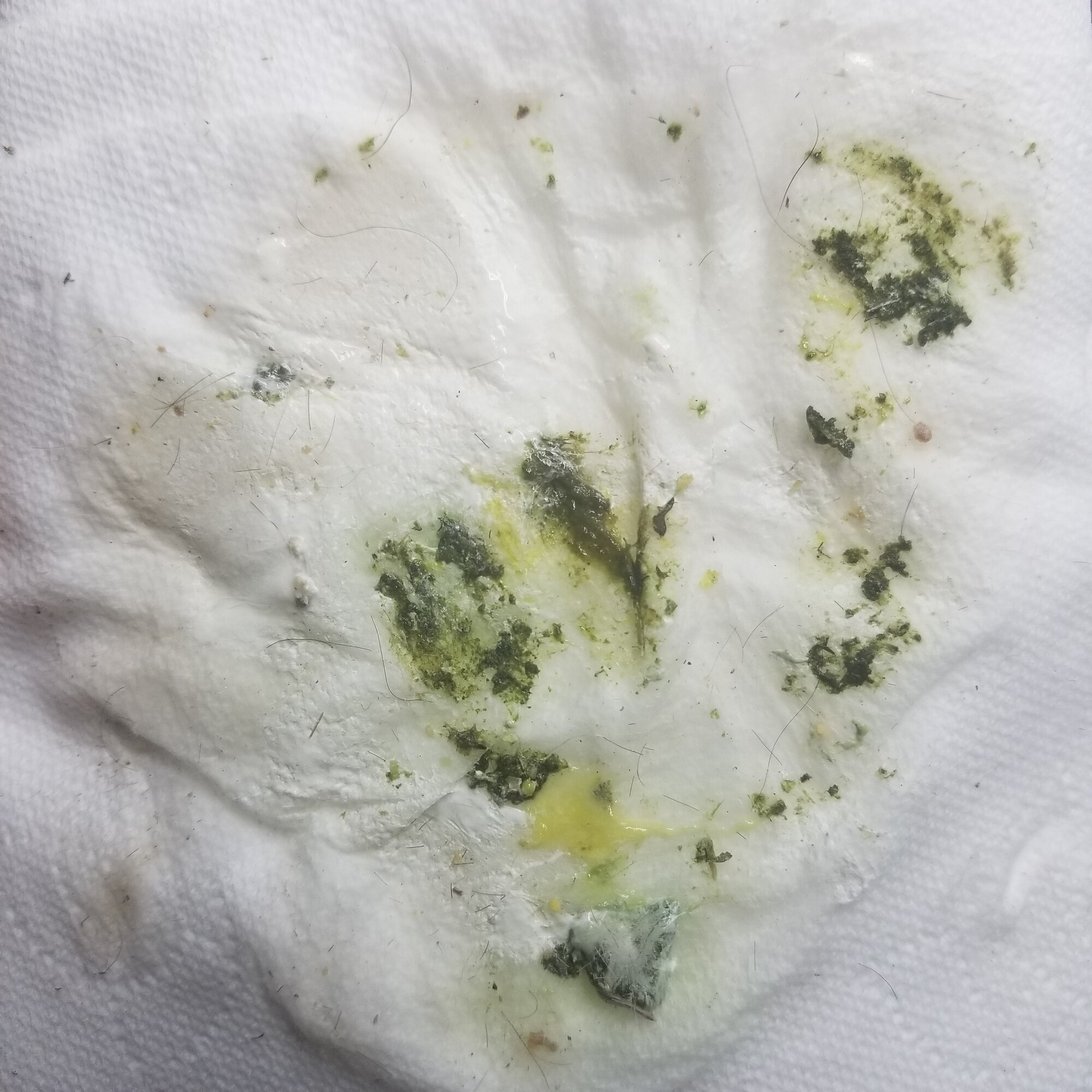 @RebeccaS2010 I apologize. I'll start another thread if necessary. I'm not trying to take over your thread. I did a search for what was concerning me and ended up posting on this one for reassurance.