I've heard one of them doing a little chirp chirp, but it's quiet again now.

No further progress yet on Vanilla Bean. It seriously takes all my strength not to interfere immediately. I'm home alone and no one's here to stop me, so I have to stop myself. Self control is not my strongest trait.

Demonwolf37 said:
Self control is not my strongest trait.
Click to expand...

Last update before I go to bed (very early for me, bit long day).

It's been over 24 since Vanilla Bean first pipped, and it hasn't changed appearance in any way. I'm trying not to panic until at least 36 hours (sometimes chicks will just magically pop out overnight like that), but I do worry.

However, SOMEONE has been talking literally all day. I've been sitting next to the incubator for around 10 hours straight, and heard a fair amount of chirps - some pretty vocal ones at times.

So at the very least someone is doing alright. No other pips yet, but I'm used to chicks not keeping to a hatch day schedule.

I've been playing chirping noises intermittently in case it's just one little chirper so they don't think they're all alone.

The chirping has really kept me going here. Otherwise I'd be in a complete panic.

Classical music always speeds up a hatch. Works for me! Best of luck!
edited for spelling

I'm hoping they all hatch... But mainly pistachio!!!

Okay, so morning update. Still no change on the pip, and it has been over 36 hours now.

I've added a hot wet washcloth to boost humidity again, but I could still hear chirping, so I'm resisting the urge to interfere just a bit longer.

I also clearly saw Pistachio wiggle, so I wonder if it's them that's been chirping!

It's only day 21, so I'm not going to worry too much that Pistachio or Wasabi haven't pipped. It's mainly Vanilla Bean that I'm panicking over because they pipped so long ago.

PippinTheChicken said:
Classical music always speeds up a hatch. Works for me! Best of luck!
edited for spelling
Click to expand...

Ooh, I'll have to try that!

So I went out for a few hours to run some errands, and I came back to a huge pip from Pistachio! Little overachiever here!

The pip is really low down though, but since they pipped such a huge hole, I was able to shine a light in there and see them breathing! And while writing this, I've heard a few cheeps, so they're alright for now.

My main worry is how far down they pipped and that they might be malpositioned. I'm going to read up again on assisting malpositioned chicks, because that's not something I've ever done before.

I promise I won't interfere until I'm sure it's needed. Pistachio seems super strong!

(I was just about to hit send, and then I saw them moving around the pip hole!

They have light colored feathers! Oh I'm so excited!!!) 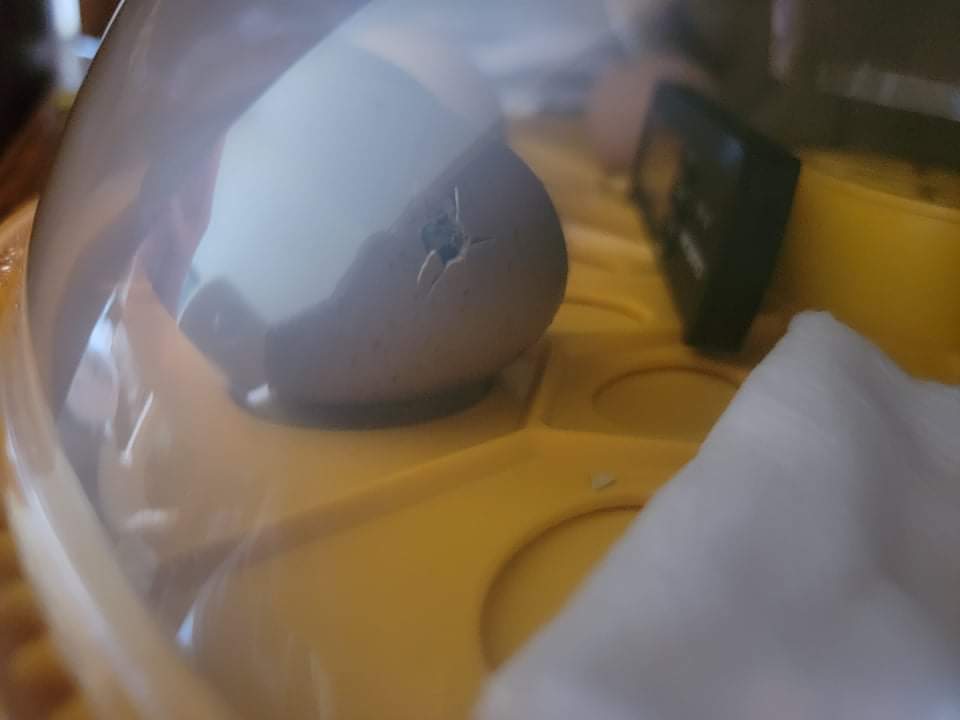 Forgot to attach the picture, how could I be so cruel?