When you breed 2 hatchery NNs with bow ties; are they all naked necked the 2nd generation? Subseqent generations? My hens are buff, there are several other NN colors and when the hatcheries describe their NNs they say they are a mixed flock. Do they mean mixed for sending only?, or are the breeding flocks always mixed and I could get white or black chicks from my buff hens? Or if I got eggs from a one color flock the chicks would be just that color? Are the NN traits such as good egg layers fairly well set or are the NNs a somewhat new breed and anything could happen?

Their breeding stock is mixed color. Buff or orangish with black tails seem to be by far the most common color though. You don't have to select a rooster to match them in color.. unless you want to.

It can be hard to predict what colors yours will throw due to the mixed ancestry. Unless you have a black rooster, there will be no blacks as black is dominant. There is a recessive white so it is possible it may show up if they were carrying it. A flock of just one color is far more likely to be 'stable' for that color, yes. (especially if it's a color such as recessive white).

NN have a good reputation for being reliable egg producers(also by many comments here regarding them on this forum). There's a "but" though- in backyard flocks, it's extremely common for the hatchery stock to be mixed with various breeds with any naked necked chick being sold basically as a pure "Naked Neck/Turken".. I often see "Naked Necks" with tell tale signs such as small crests or leg feathering- signs they've been crossed/mixed.. there's the chance some of those may not be such good producers.

It's very commonly stated that any naked necks with any sort of neck patch are not pure however that is not true. There are many pure for the naked neck gene but the visual difference is these have a very small neck patch with just a few feathers on each side of the neck with the lower neck and crop area being naked and visible. Birds with large neck patch with the feathers covering the lower neck and crop area are not pure for the naked neck gene.

Birds with totally bare necks are not common.. they're around just don't see them that often. 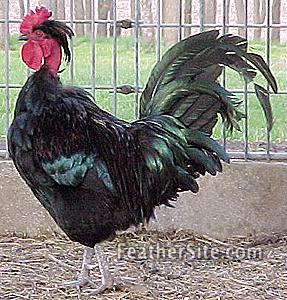 This hen is homozygous. Note the lower neck is very visible and so is her crop area: 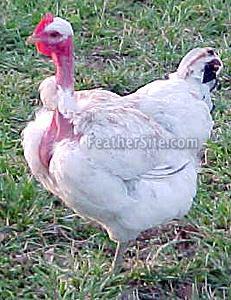 If you breed birds like the bird in second picture and none like the first, you will have a flock of birds pure breeding for the naked neck.

kev; Wow, Thank you for such a knowledgeable answer!!
I really, really like my NN's. A lady up the road and I shared a chick order, she has all buff hens also, and has a black rooster, (without crest) I'm thinking of hatching some of her eggs and just don't know what to expect, hopefully more of the same of what we've got!!

Glad to help and to see you're enjoying this neat breed!

If the rooster was also from hatchery, I'd say he's good to use over these hens, at least for 'dual-purpose' reasons. Since he's black, you're sure to get at least half black offspring(or all black if he happens to be pure for the black gene).

If he shows white areas on wings or saddles, this means he probably has the silver gene, in that case you may possibly expect black tailed white hens similar to that one above. If he shows red in those areas, it means he doesn't have the silver gene so his "not-black" babies probably would be buff like your hens. This is also assuming he is not pure for black though.

It'll be a neat lesson in genetics and observation to note the bow tie sizes of the parents and to see how the chicks come out in the genetic ratios. Also, the bowtie size can be seen on day olds.. in the picture below, the chick in middle and right side both are pure for the naked neck gene and the one on left is not. Notice also that in these two, they also have the naked spots behind their eye and also in between the eye and beak. 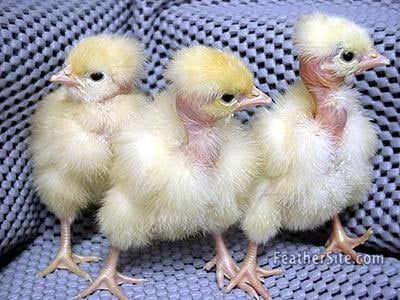 Just to show off a little bit, here's a picture of my own bue chicks- these are full siblings out of a rooster with large neck patch(not pure..) with a hen with a very small neck patch. Just as expected, all chicks hatched with naked necks with half having large bowties and other half with small ones. Hi! 'Naked Neck' in the subject line always gets my attention!

Here are 2 of my own from 'bow-tied' parents: This little blue guy just cracks me up: I always forget which is homozygous and which is heterozygous.
Homo' = 2 copies of?

Have fun with your Naked Necks!

Lol, 'Naked Neck' gets my attention every time also.

That guy sure doesn't have much in the way of wattles. Did he have bearded parent(s) or come out of stock with beards present? Just wondering if he may be possibly genetically bearded(beards often reduce wattle size).
Last edited: Mar 19, 2009

I am learning a lot here! Thank you guys!

Some of the het NN's from the cross have beards, but I think him being homozygous NN left him 'clean-shaven' and small-wattled. I kept waiting for his wattles to grow but they never have.

Maybe that explains something else I'd been wondering about the NN x Ameraucana crosses being almost 'wattle-less'.

I have two heterozygous NN hens that are completely wattle-less. One shows "mutton chops" on the cheeks.. she is also rose combed. The other is single combed and does not have any beard or muff fuzz at all(she is out of a line that does have muff/beards on some birds).

I am just learning about NN's so just to clarify for my pea brain.
If I cross a NN rooster (I don't know his lineage) over Rhode Island red hens, what percent of the chicks will have naked necks?
Thanks
Buckguy