Below is Spotted Head, she has been brooding continuously since the middle of June. 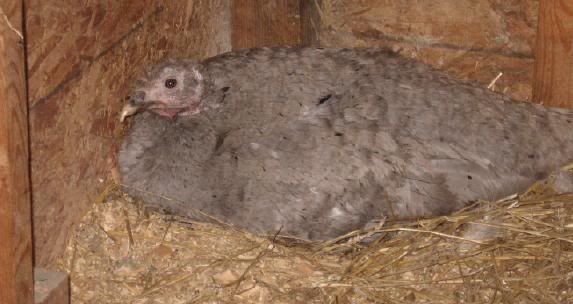 We had the RP and Slate hens in their predator proof dog run where both were working on clutches (would return to the main run in the evening to roost). Before they had enough eggs to flip the brooding switch, the RP was killed during the late afternoon by a raccoon while protecting a second nest just inside the woodline (didn't know it because she had eggs in the dog pen and was coming back to roost every evening!).

We moved all of the eggs into the back corner of the turkey shed and the slate hen continued to lay. We added the RP eggs to the clutch and the last count (before the Slate became `untouchable') was 22.

As of this afternoon there were still 5 eggs (stood up to give me the hiss) and she remains insistent.

She comes out to drink in the mornings, beat up on the low tom in the pecking order (1RP/2Slates), grab a few bites of food and get back to setting. None of the toms have had anything to do with her in over four and a half months (totally ignore her) even though they share the same run and shed.

Just how to break this cycle without kicking turkey butt? Is there a better method than forcing the issue? Or should we just wait until she either consumes the rest of the eggs as they go bad (has only carried two out), or just grab `em and go?

We'd like her to get out and about before the really cold weather sets in. Last year the hens gave up by late August. Has anyone else had a similar experience?

This seems to be instinct eroding into compulsion...

You have to take the eggs away....

DO you really think she's been eating the eggs? I would think they were rotten by now.

Thanks for responding! I suspected that removing the rest by hook or by crook would be the recommended method (we were really hoping she'd hatch out some of the RP's

), but that hope faded to black back in Aug.

Yes, she eats them (saw the same behavior last summer-both hens). We rake the run daily and two, squashed, dried out, eggs are all that have turned up. No smell of rotting eggs at all.

Here she is last summer dropping a `bad' egg about 30 yd.s from their brooding pen (I'd never seen this before - if I didn't know better I'd think she was depressed about it - `body language' `slinking' off slowly...) 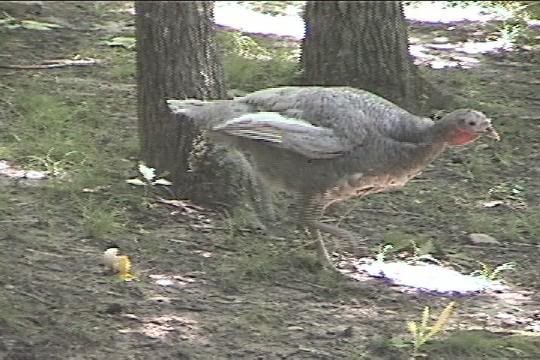 Guess I'll swipe `em when the sun comes up in the morning. I feel for the omega tom - she's a pretty aggressive girl...

I love the term you made up - "broodacious"! It should become part of the BYC chicken dictionary! And maybe the Henderson chart could use it for their assessment of broodiness tendancies of some breeds.

Buff Hooligans: Well this hen is definitely afflicted with the power of positive thinking. Her RP companion was a crazed flyer that could have avoided the raccoon with a single leap into the trees, but she contested the issue to the death.