Has anyone had any experiance with non game breeds crossing with pit games? I have a game hen (given to use as a broody) that lives wild) If she appears in the spring with a clutch of half BO's in tow what can I expect out of them? I do not mind cross bred birds but I wonder if the hens would be worth keeping? Would the roos be way too game to keep to butchering age?

I mean I dont want to tie out all the roosters lol.

i now got him 4 gf's and instead of a "leash" he can walk and jump lol, and when i come into the pen,, he just wants AWAY from me

and if i get him in a corner, i can grab him and scratch his head without any flesh releasing from my body

but he doesnt try to go towards people, just away,, so i bet if i had him from chick,, he would be a cuddle, my leghorn is more [email protected]@@ then he is

EDIT ta put a pic in,, hehe < sometimes i like ta brag,, hehe 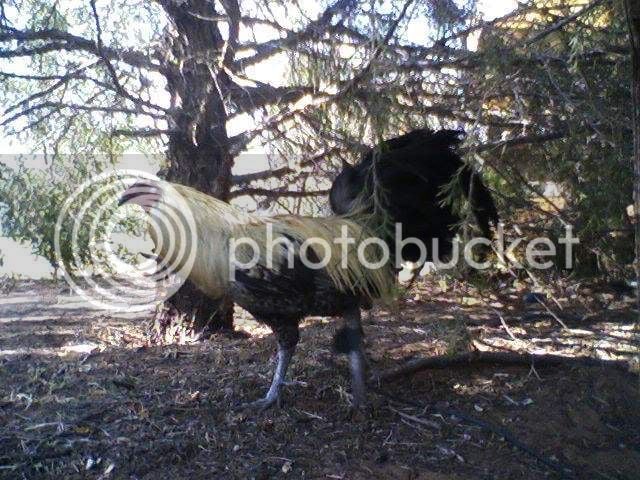 Very nice one. I guess if all else fails I will start my own line of buff games

hand em out on halloween ,, they'll be surprised ,, hehe

Your excess roos from the chicks she hatches will probably try to kill each other, at least once they get a few weeks old. You might try isolating the boys until they get big enough to eat. They'll be scrawny birds as far as the meat goes, but if you crock pot them they'll be tender and tasty.

Catching them is another story. If mom's wild, the babies are likely to be hard to capture, unless she takes them inside at night, and you can close them up.

There are some guys around here that raise fighting chickens, I think it's a barbaric practice, myself. They like to point out that these birds like to fight, which is true, but they've been bred to exaggerate that trait. They also claim to love their birds, but how loving is it to put a creature in a ring to fight to the death? Bah! Humbug!

i'd like to know who they are.... bet they would jus luvvvvv me,

Your right Dancingbear. She stays in a tree at night so They would be impossible to catch. But at least now I know where she lays so I can keep her from hatching any.

...until she selects a new nest site because her eggs keep disappearing.

You might need to trap that girl, some how. Do you have a live trap, or know somebody who might lend you one? If you just put it out where she hangs around, but don't bait or set it, just leave it a few days, until she is used to it and ignores it, then open it, set it, and bait with something chickens love, (do you toss treats to her? If not, maybe if you start, she'll get used to getting goodies, it may help you catch her later) like bread or tomatoes or some fresh corn, maybe cut off the cob so she'll smell it...maybe you could capture her. Unless you just want her wild offspring all over, the ones that don't kill each other, anyway.

If you can keep her in a fair sized pen for awhile, where she has a coop to go into at night, maybe she'd calm down and become somewhat tame. Probably never let you touch her or pick her up, but maybe go in at night, lay eggs in a nestbox. (maybe)

Chickens who don't know about treats sometimes won't eat them at first, but when you're not looking they'll come back to see what it is, they're very curious. When they peck it and find out it's food, they'll eat it up. Eventually, they begin to respond, even come running when they see you toss something out.