This is just a broad question to try and see what others experiences have been. Have you ever had a bully chicken (not a rooster)? If so, what did she do to make you feel she was a bully? Did she injure others in the flock? How did you handle it? Do you wish you’d done anything differently?

She constantly picked at other birds and the corrupted the enetire flock making them just as mean.

TheTwoRoos said:
She constantly picked at other birds and the corrupted the enetire flock making them just as mean.
Click to expand...

When you say picked, was it as if she always have to peck at one, like she’d see them and ‘oh hey, what’s up *peck*’ and then repeat for every other bird?

When my chickens started to lay eggs from being young pullets, I’ve seen a few bullying almost fierce battle over nesting boxes, I’ve seen it with the Wyandottes and my RIRs. So they wore these for a few. 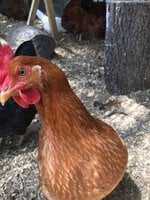 No she cause bleeding and usually picked on the softer birds,

I had a nasty hen my first year. Plucked and broke feathers on 2 other hens, and then pecked at the bloody spots. She also terrorized the Barred Rocks I tried to integrate. I tried to discipline her by putting her in chicken jail a few times. I even put little jackets I made out of the legs of jeans on the injured hens, but she just went for their tail feathers. I ended up rehoming her, because I did not feel capable of fixing the issue due to lack of experience.

The guy who took her and her same breed bullied sisters (I let him know the problem before giving her over) was able to rehabilitate her rather quickly, I was surprised and a little sheepish. Her sisters grew all their feathers back, and all was good. Turns out, she just needed more space and free range environment. From what I understand, some aggressive hens are easier to break than others, and it's a matter of figuring out what they need. And if all else fails, there's always chicken dinner.