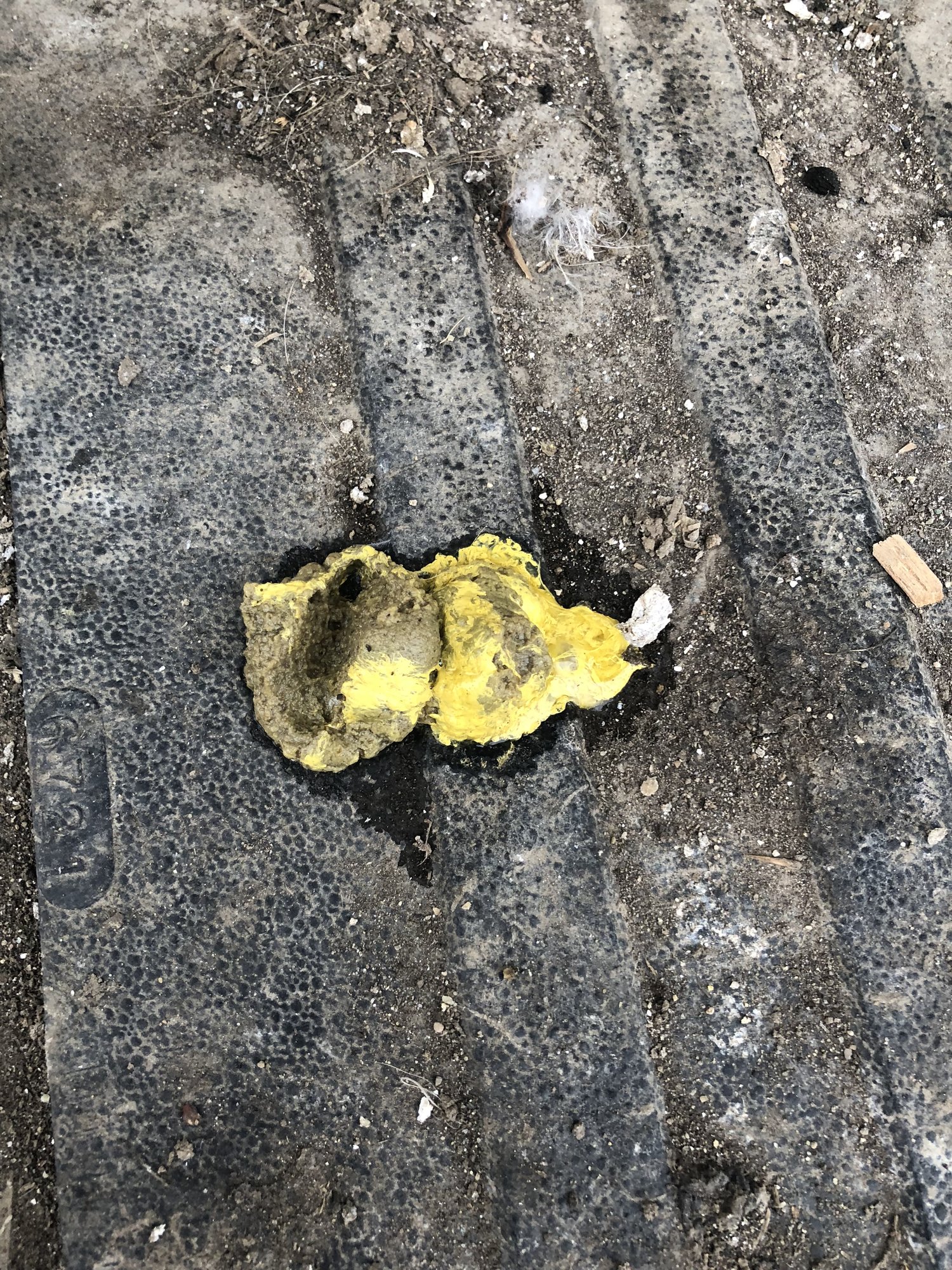 I have a hen that I am concerned about. She is about a year old. She was sold as a Buff Orpington at Rural King. But I have always suspected that she was really a red sexlink. If she is a BO, she is certainly Hatchery Stock. I noticed about a week ago she had a bit of a saggy bum. She would waddle a slight bit. I equated it to a baby walking around in a poopy diaper. But otherwise she acted normal. She would try to steal the food I give to a couple of my special needs birds. (I sit out on my porch with these little girls and feed them a special mash I make out of their food because they are the youngest and at the bottom of the pecking order.) I chalked her saggy bum up to being a little chubby but also looked up symptoms for EYP and ascites. I caught her the other night. And the area did feel pretty squishy. Most of my birds are at normal weight or a bit thin. Nearly everyone is molting, and some are having a harder time than others. She is getting ready to fully molt too. I do not know if she is currently laying. I have a lot of girls that lay the same colored egg in the same area. Anyhow the last few days I have noticed some yellow poop stuck to her bum, and her bum isn’t as saggy as it was. Plus she has stopped harassing me for the special food. Sure I have shooed her away several times because she’s chunky and didn’t need it. But it’s definitely a personality change for her. Yesterday I saw some of the girls peck a bit at her face, and she didn’t really react. Today when I was out, she was a little more antisocial. She stood by herself slightly fluffed. But she didn’t run away from being a part of the group either. She’s just not quite like herself. I wouldn’t call her lethargic really just not quite right. And then I saw this poop. And she had another poop like this too. I am concerned that she’s starting to go downhill. As an important side note, I have Marek’s in my flock. I do not know if there is a vet I can take her to in my area. And I don’t really like the idea of taking a Marek’s positive bird out in public and risk spreading the disease more. I have lost too many girls to direct Marek’s symptoms or secondary illness. And I am hyper sensitive to my flock’s behavior as a result. Two weeks ago I lost my first duck (mixed flock) in a year. She just stopped acting like herself and was gone within a few days.

Am I being paranoid?

That looks like it's possible an egg broke in her, can't recall the proper terminology. Try searching in the forums for "Egg broke in hen" or egg bound. Sorry I can't be of more help. Lets see if we can get some ... @Wyorp Rock @Eggcessive @azygous

Yellow like that can be a sign of infection and or liver disease. Can you get a baseline weight on her?

I can try tomorrow. I gave her a dropper of Nutri-Drench last night with no real improvement. 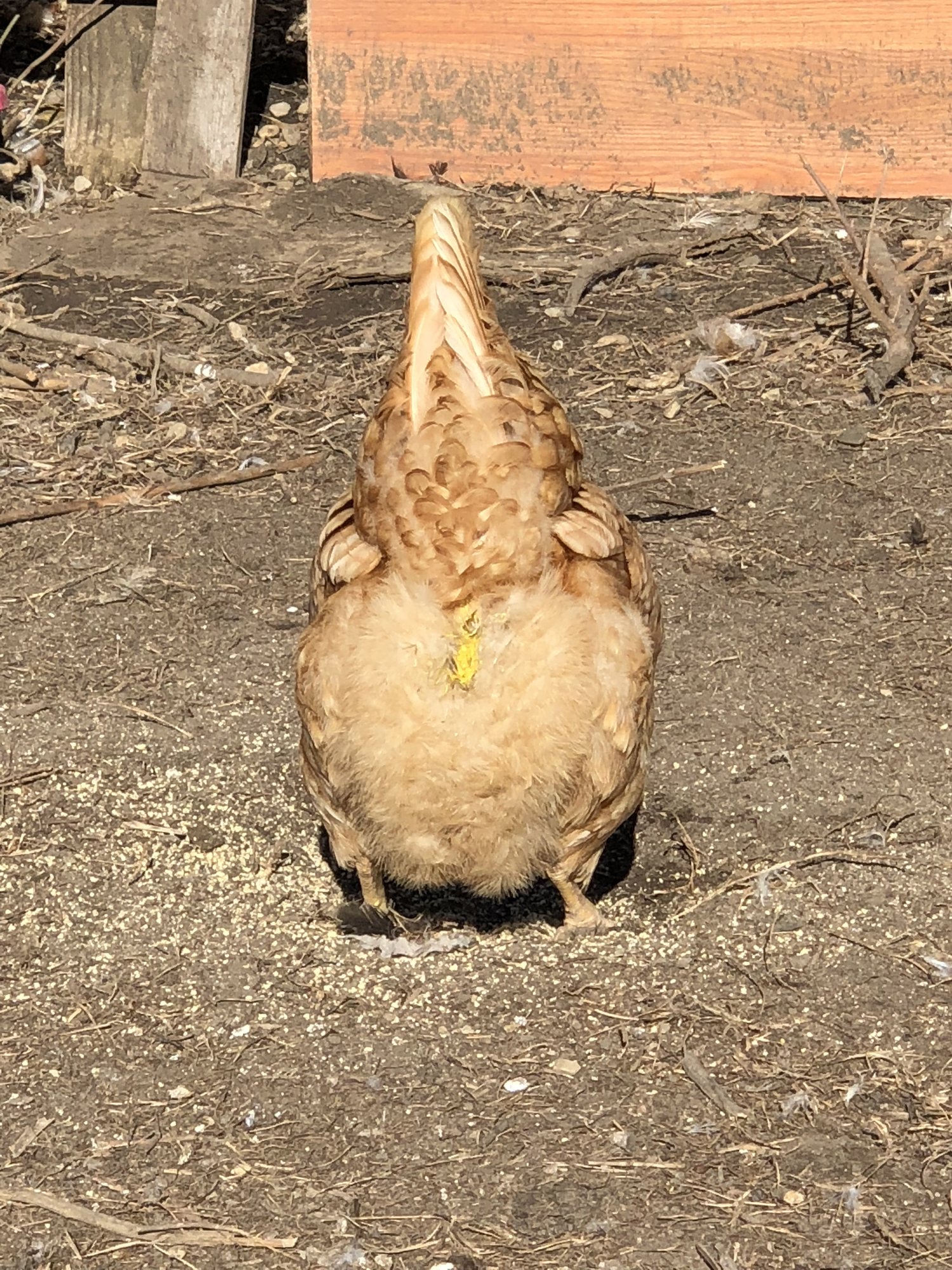 She seems perkier this morning. I wanted to post a bum and side view picture. She was in the middle of scratching for some food when I took this and looks like more hunched than how she has been carrying herself.

She drinks and eats but will not get pushy for the food. Her bum looks a tiny bit saggier this morning. Is there anything I should start doing for her? Antibiotic? Bathe her?

She keeps giving me side eye because she knows I’m watching her intensely!

Suspected Marek’s, anything I can do?
2

Pls help! Does my hen have vent gleet? egg bound?