Hello, I'm new to the forum. Been reading a while, but this is my first post. I've owned chickens for about 2 years. I recently purchased some chicks from a local farm and thought I was getting some kind of Wyandotte, but they were mixed in with some other chicks including, but not limited to, Easter Eggers. After looking at various photos of wyandotte's, I realized mine look somewhat, but not terribly similar.

I was wondering if you kind folks could help me ID these two chicks.
Thank you! 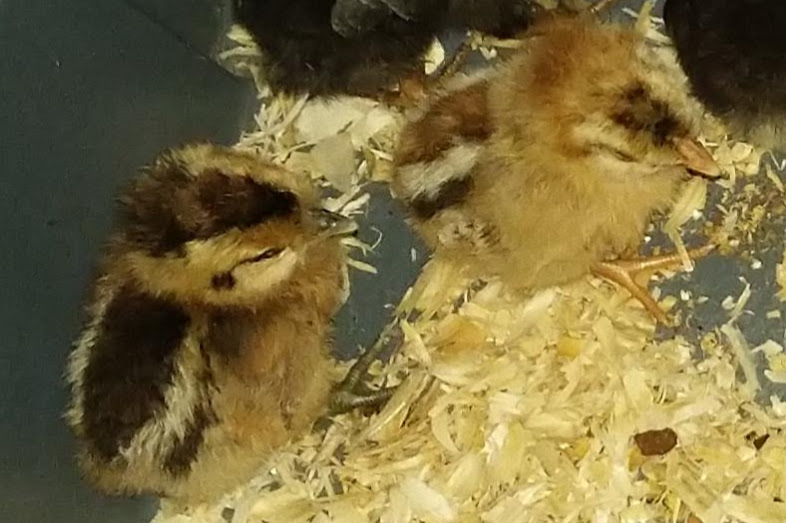 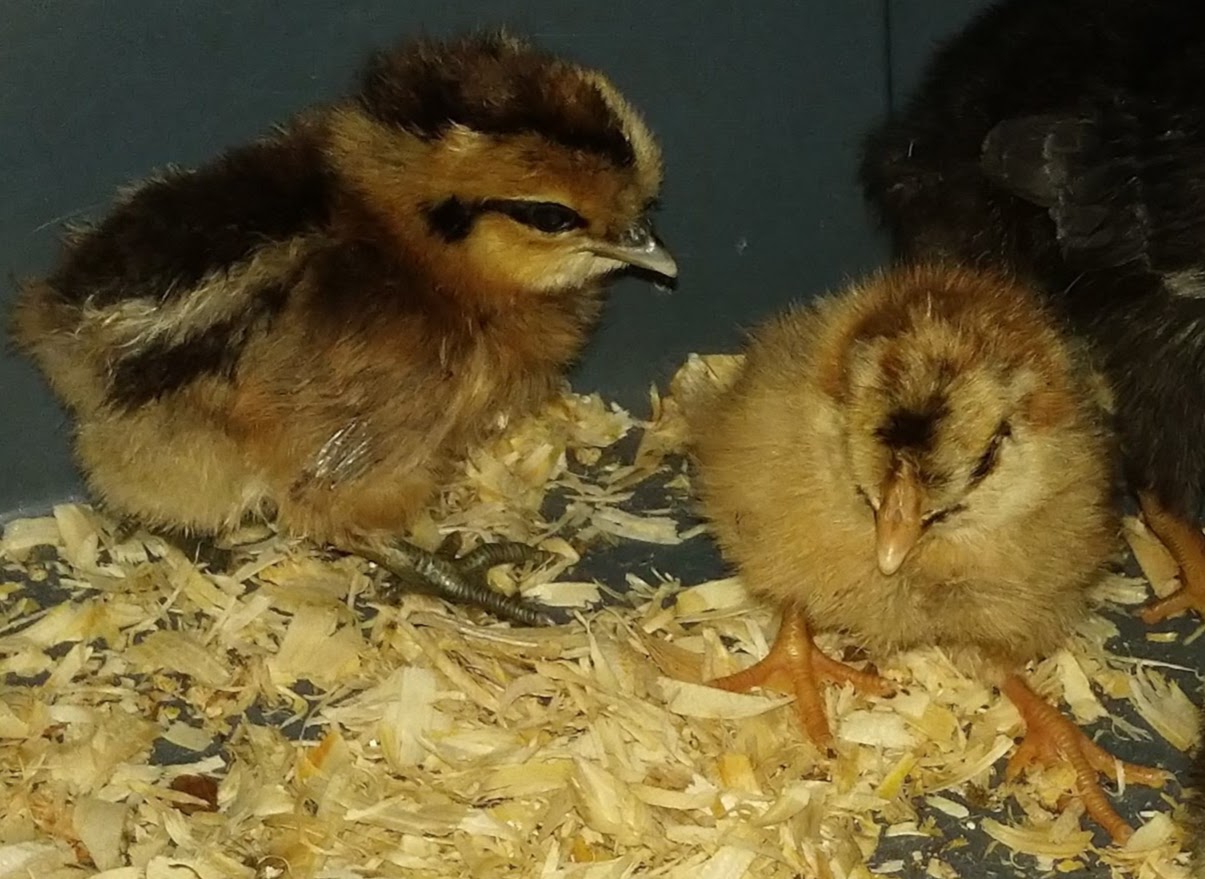 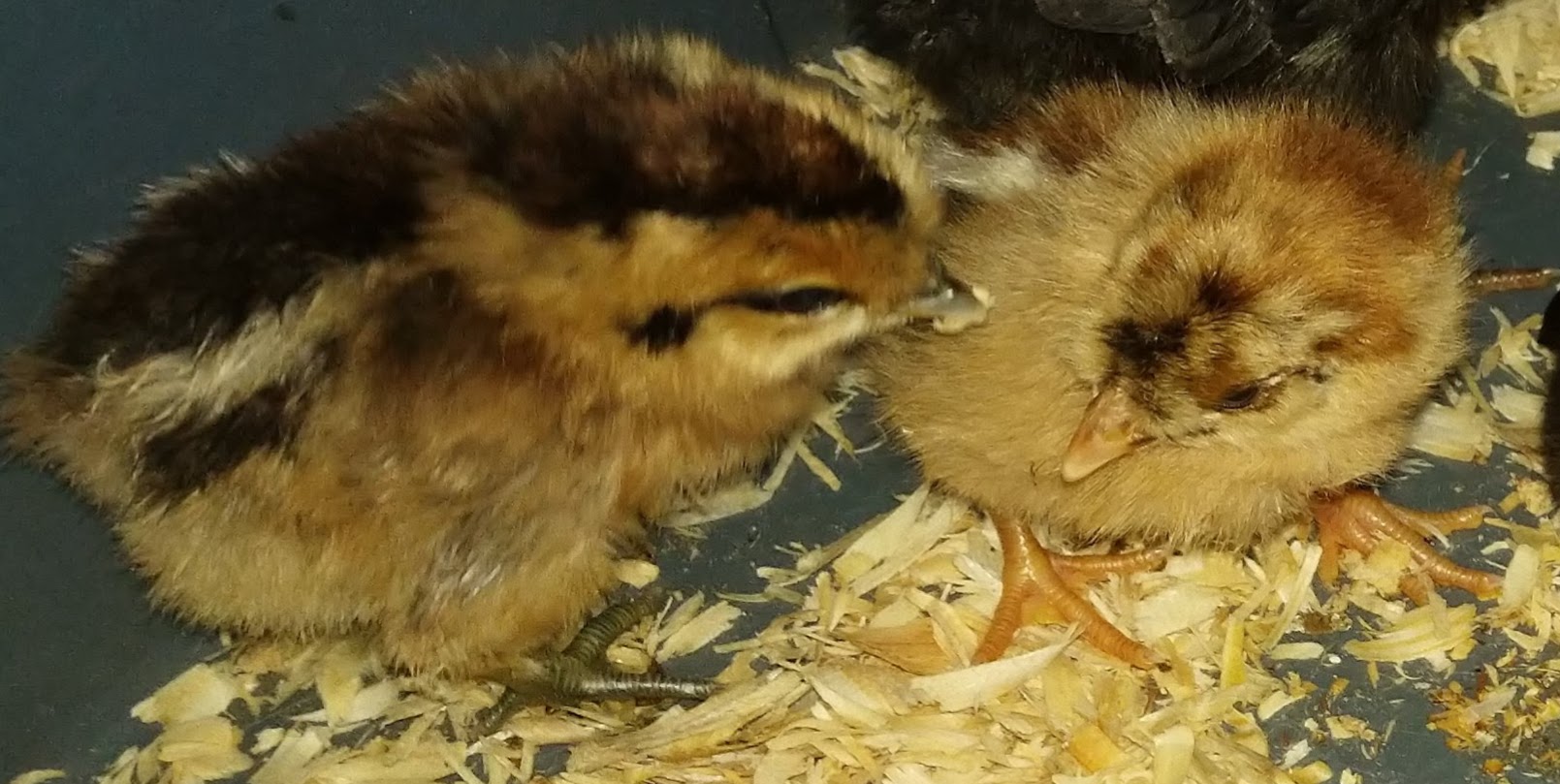 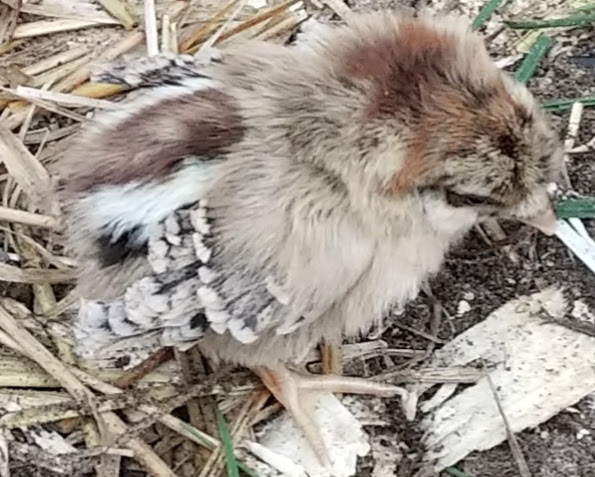 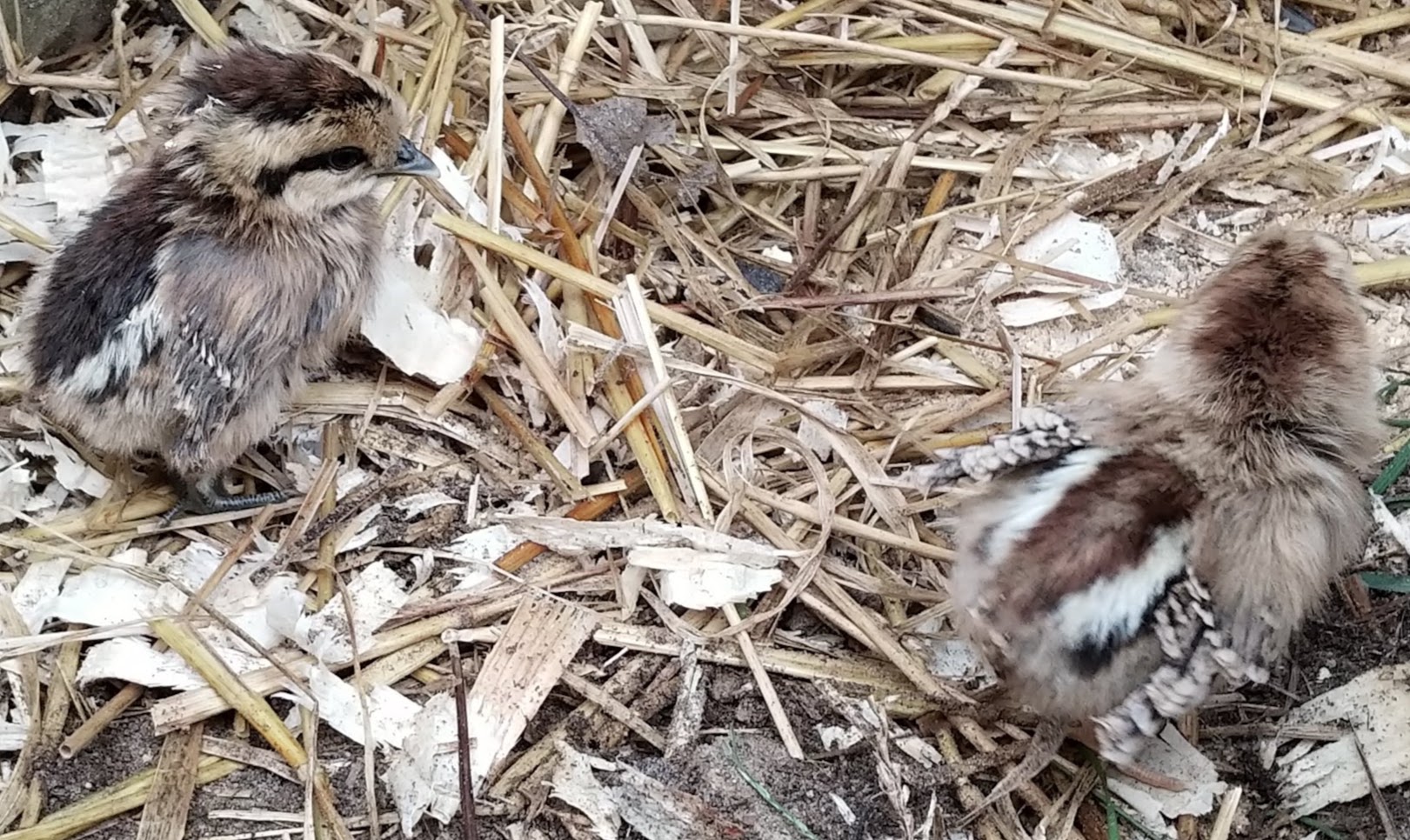 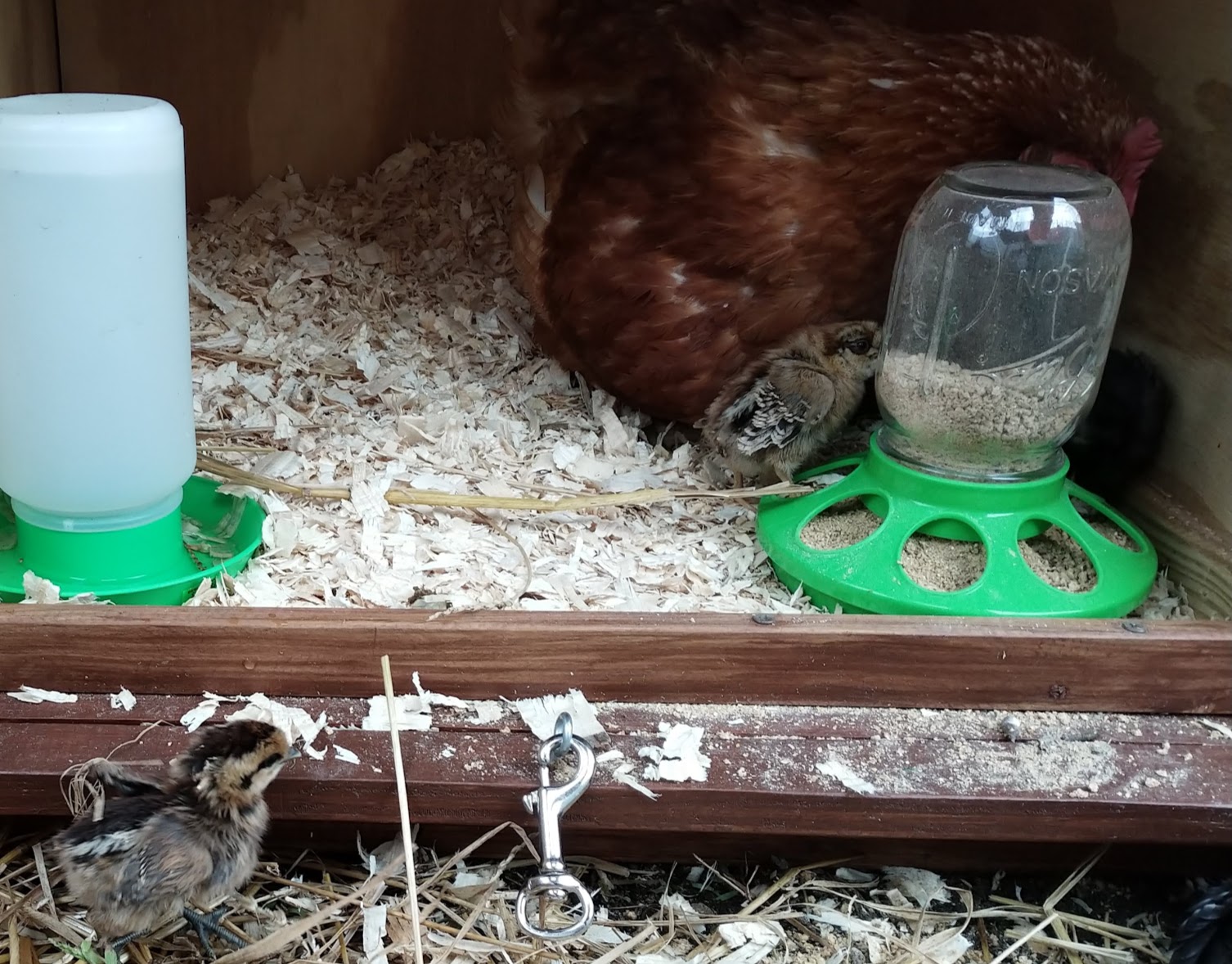 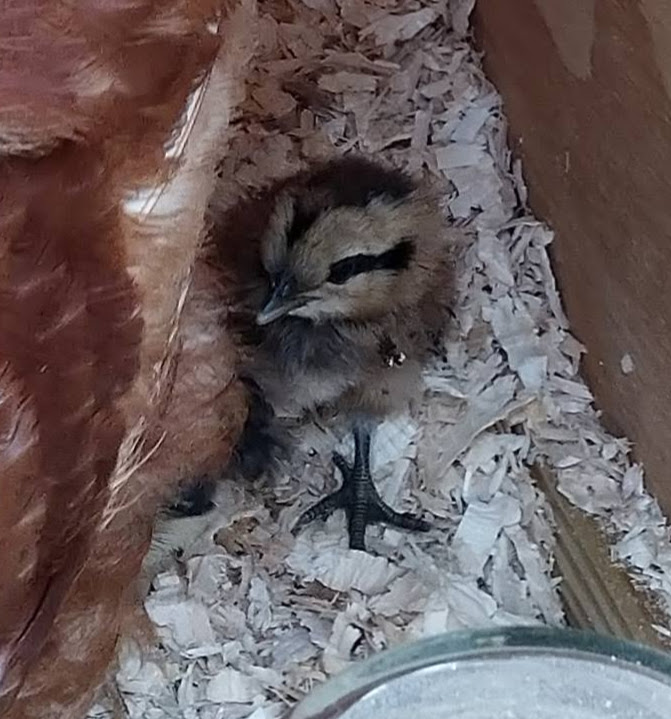 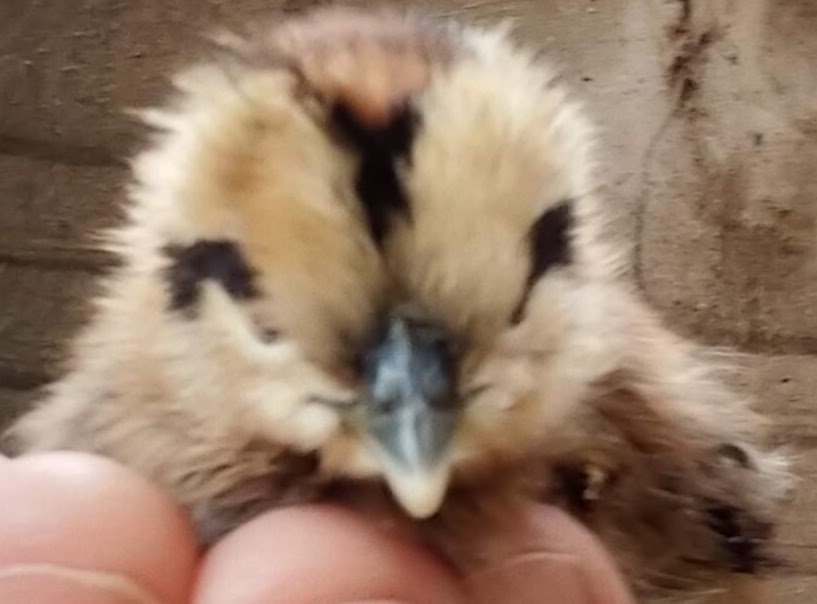 OK thanks, that is what I was thinking as well. I'm kind of bummed but my girlfriend is happy, so its all good.

You'll have to wait until they fully feather out to see what breed they are. Especially if they could be crossbreds.

The chick in photos 1 and 2 on the right has a rose comb, so it is at least a Wyandotte mix. It also has the yellow to light yellow legs. (Your first 2 photos are overly warm in tones as compared to more natural lighting).

The chick on the left in photos 1 and 2 is not Wyandotte, nor do I think EE. In subsequent photos its legs look very dark, black even, with a very dark/black beak. It doesn't have a beard/muff, so it can't be Ameraucana. It doesn't appear to have Wyandotte as it does not have a rosecomb (which is dominant over single).

Did the farm have some Silkies? Or Sumatras? It is a mix of something.

At any rate, EE should be giving pea comb, and hopefully some beard/muff and green leg, but we've gotten so far away from any kind of normality in EE's even for early generation hybrids.

With that black face and black legs, what other breeds did she have running around? (My guess are some Silkies somewhere?)

Definitely had some silkies running around, and after looking at some other pics of silkie chicks it seems to be a definite possibility. Here are some more pics of the dark skinned chick. 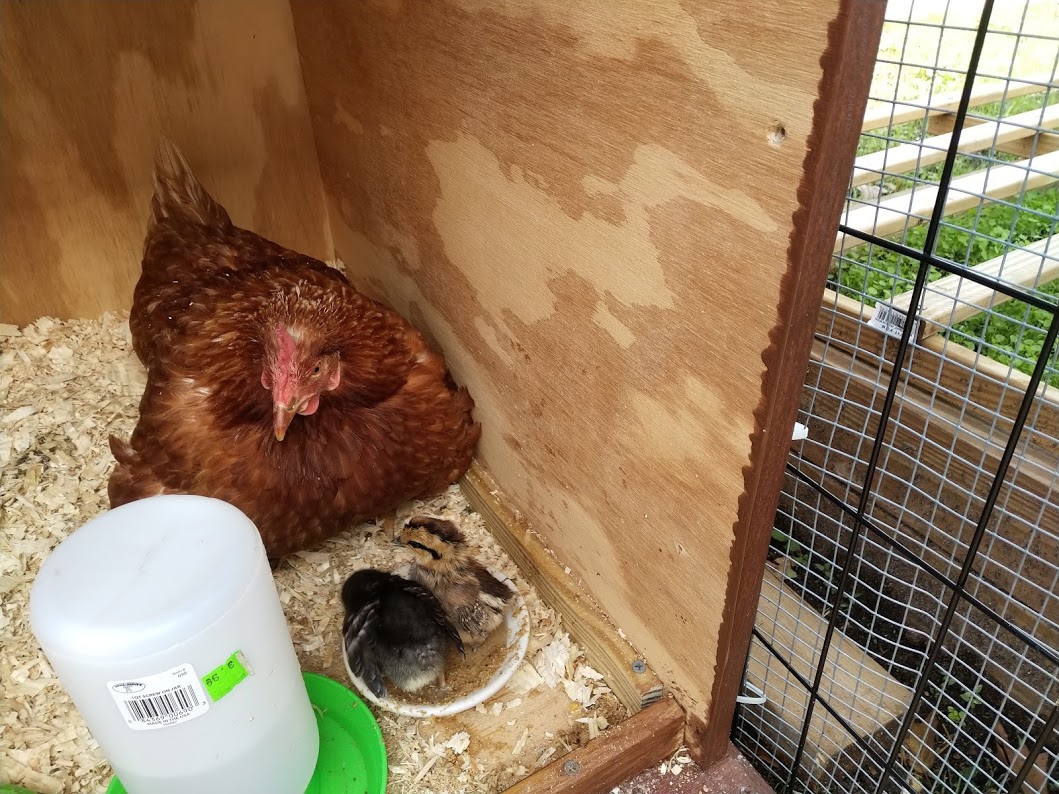 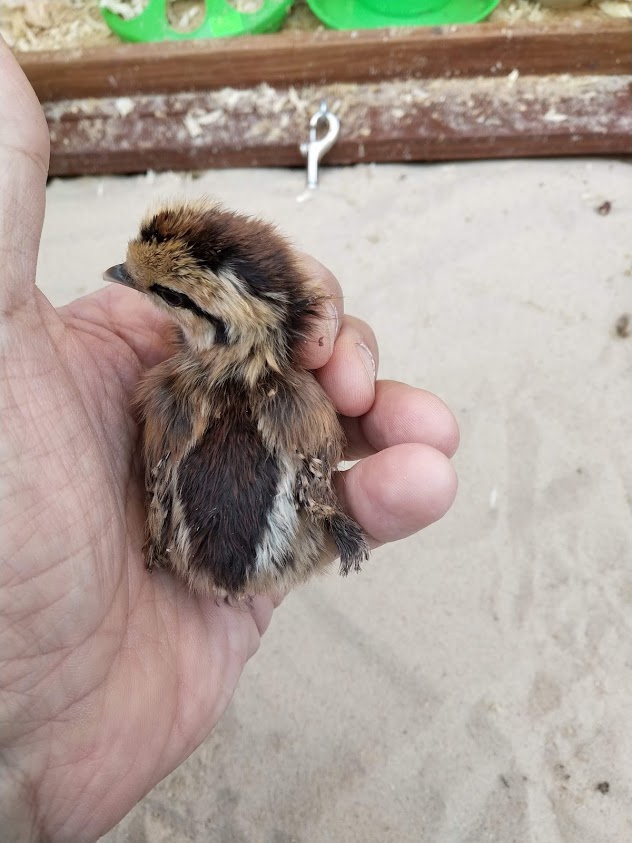 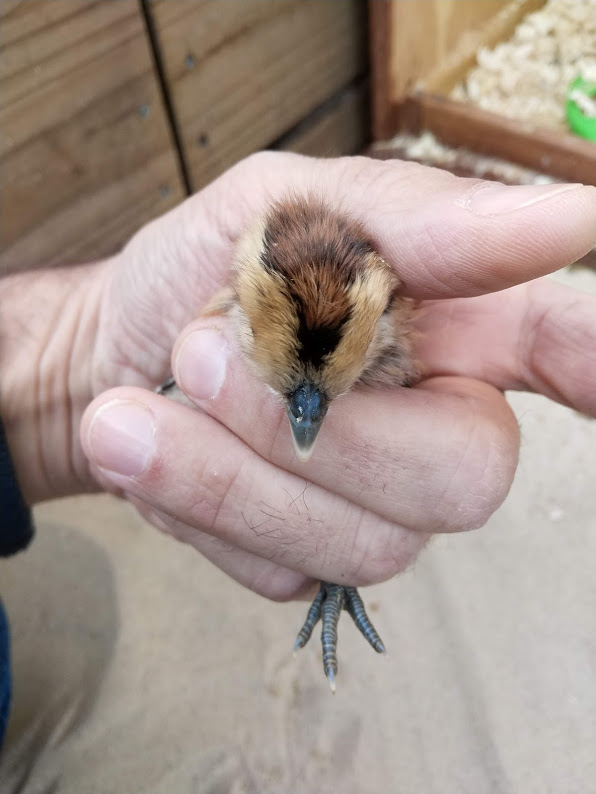 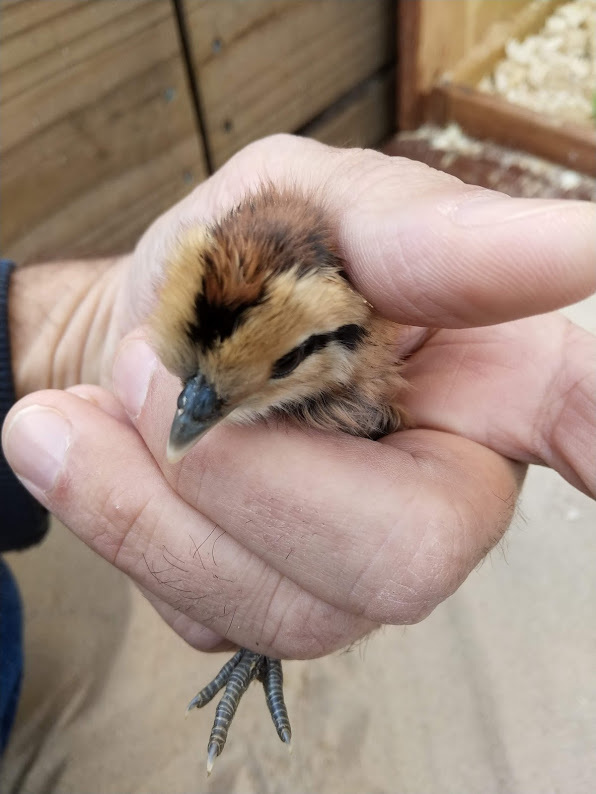 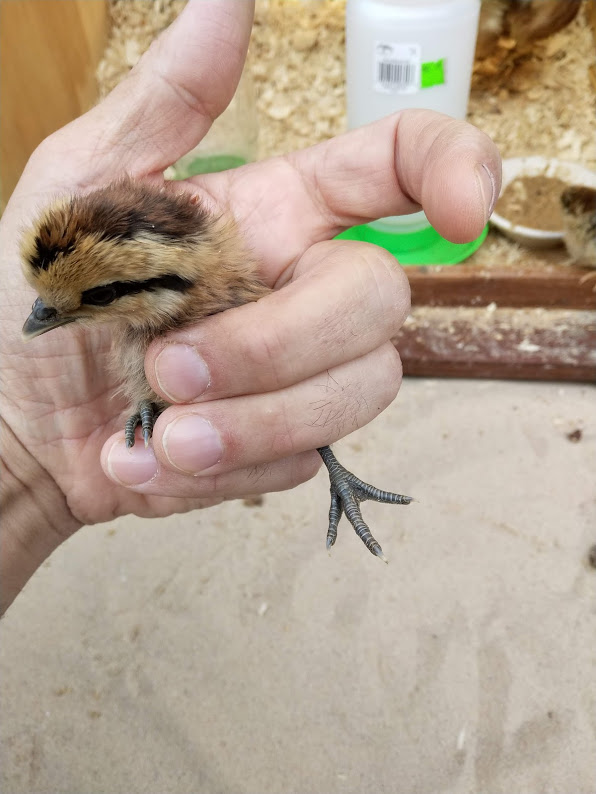 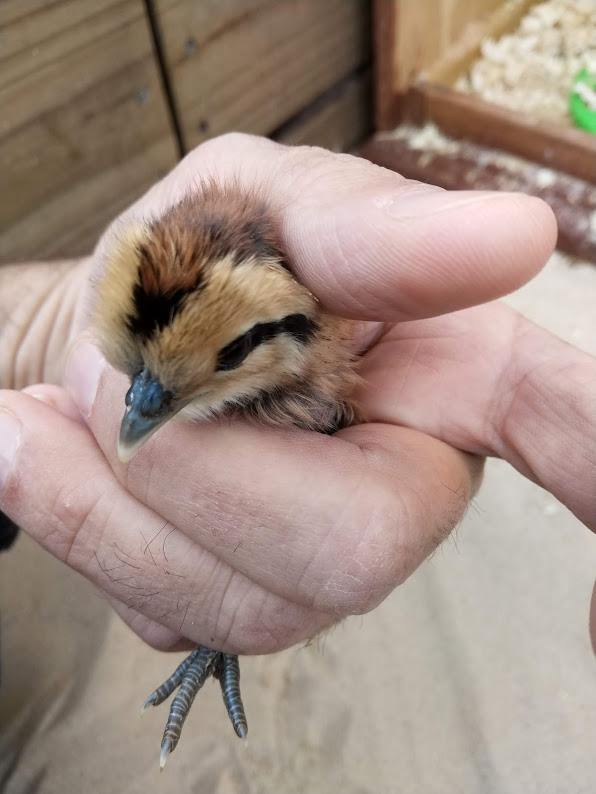 And here are some more of the light skinned chick in case someone else wants to chime in. This one is supposed to be a Blue Laced Red Wyandotte. Thanks! 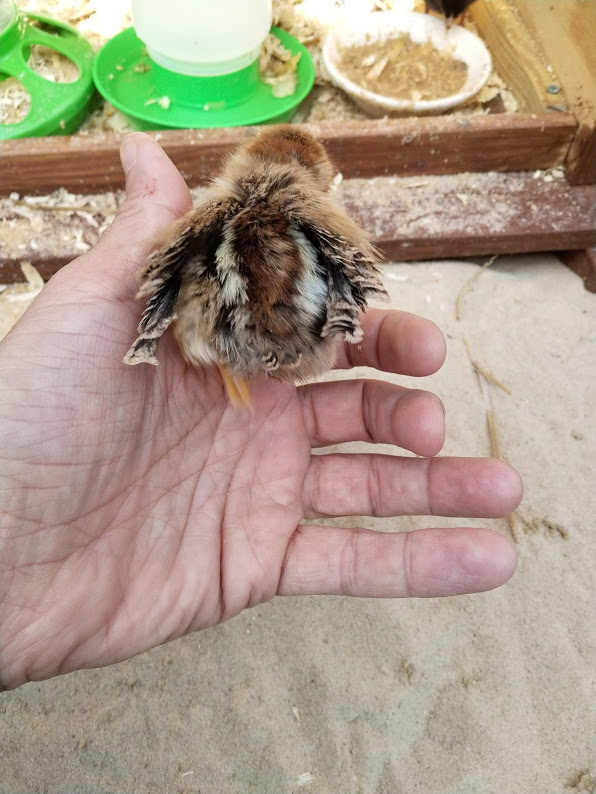 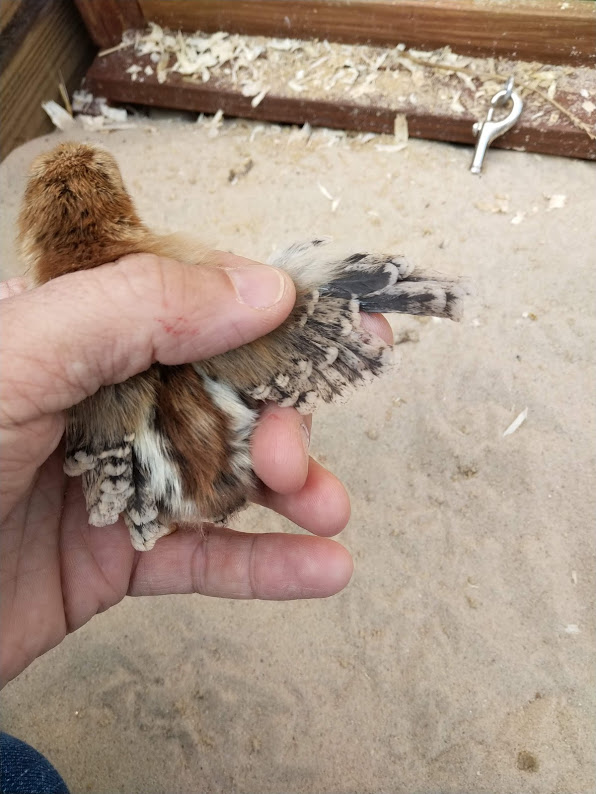 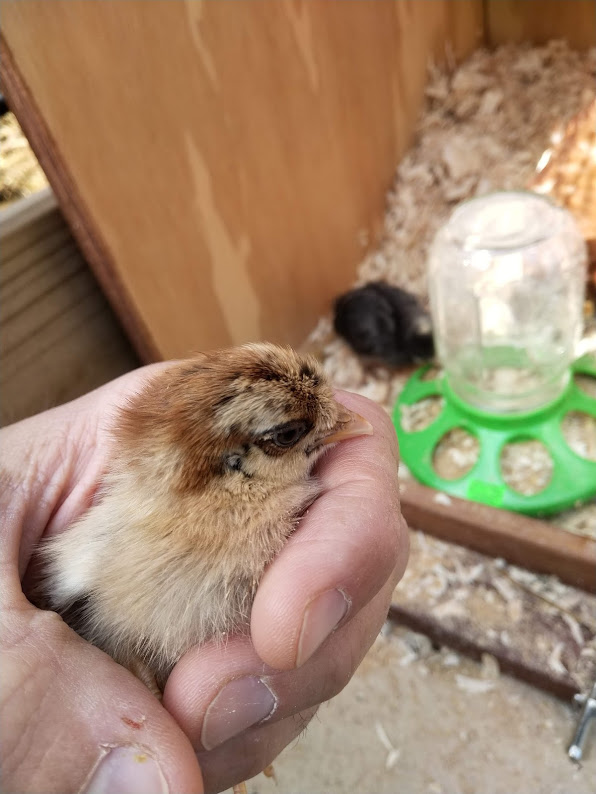 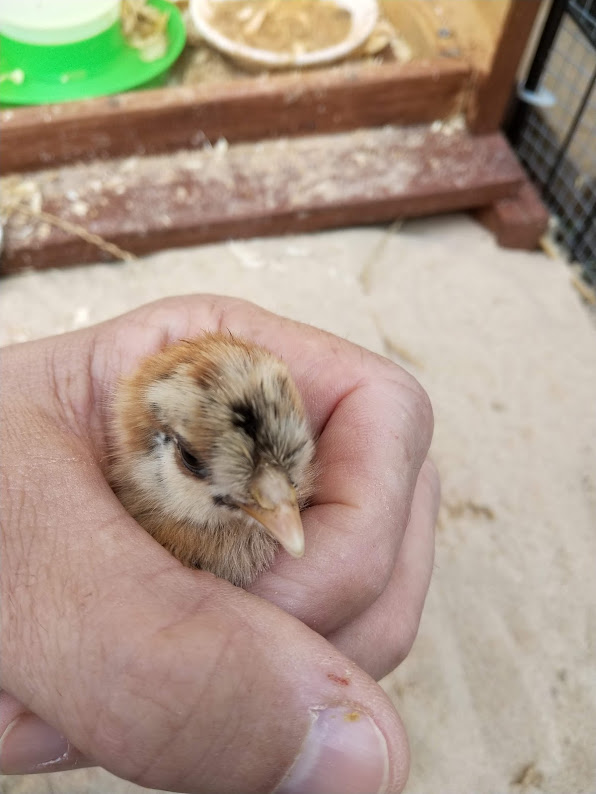 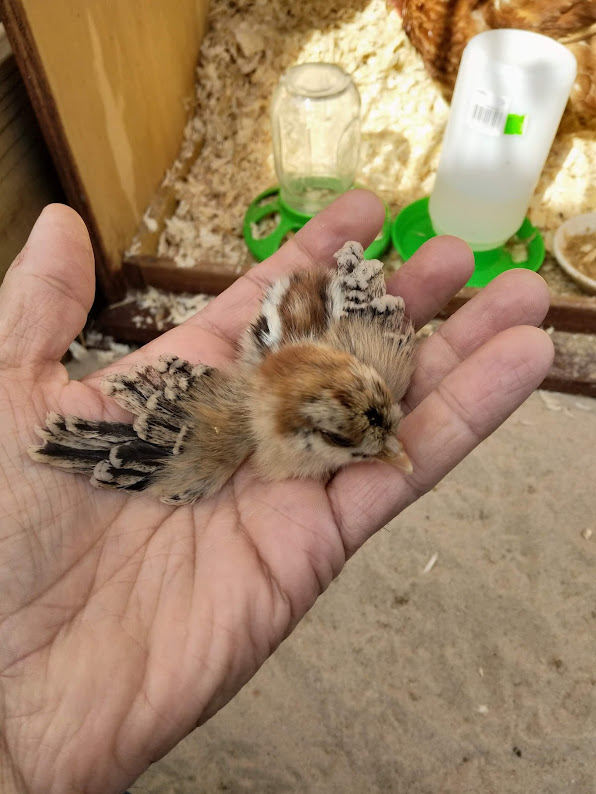 Yes, light skinned chick could be a Wyandotte. As to coloring, not really seeing BLR, but there can be quite a bit of variation in those. You'll have to wait for feathering.

I am leaning heavily towards Silkie mix with the black skinned chick. It is not uncommon for hybrid Silkie, even first hybrid, to not have 5 toes and not have Silkie feathers. With that dark of face and skin, I really think it is a Silkie hybrid. Can't tell comb type fully other than not rosecomb. Silkies have walnut (pea gene with rose comb gene produces walnut), so depending upon the mix, your chick could go more pea comb or even walnut, though it looks like it might be single, which would throw this to being a mix of a mix with Silkie blood somewhat further back but enough mixes being bred to bring out the black skin.

Welcome to BYC @sotchicken! I hope you stick around and come back with updates! I have no idea what you have for that lighter chick but ima guessin you'll get a built in alarm clock. Roos are awesome! Please come back and tell me what I win if I'm right

post pics as updates? Will help the natives pinpoint breed (and give me the option to change my mind but...)

Is this an Olive Egger?

E
Is Creampuff a Hen or a Rooster?
2

C
Supposed to be a Silkie? Hmmmm..