I had a hen incubating 4 turkey eggs and 4 chicken eggs (I put the chicken eggs under her a week or so later so they'd hatch at the same time). The first chick to hatch was a chicken, and seemed healthy. Later on I found it dead.
The second chick to hatch had a small hernia. I patched it up and he's doing fine now. The next egg died in the shell, and I opened it to find a huge hernia. The fourth chick was born with a small hernia and was doing alright but died from a suspected infection.
The turkey eggs began to hatch now, and one was also dead in the shell with a huge hernia (the one in the photo below). Another was born alive, with a fairly large hernia, and I patched it up like I did with the chick that's still alive, but it passed away a short time after.
There are still two turkeys hatching and a few eggs under another broody due later. I'm wondering what causes hernias, and what should I do so the chicks survive? My mum read somewhere you should leave it and it'll fix itself, but I read that if you don't put the hernia back in place it'll kill the chick.
Please help me, I don't want anymore chicks to die. 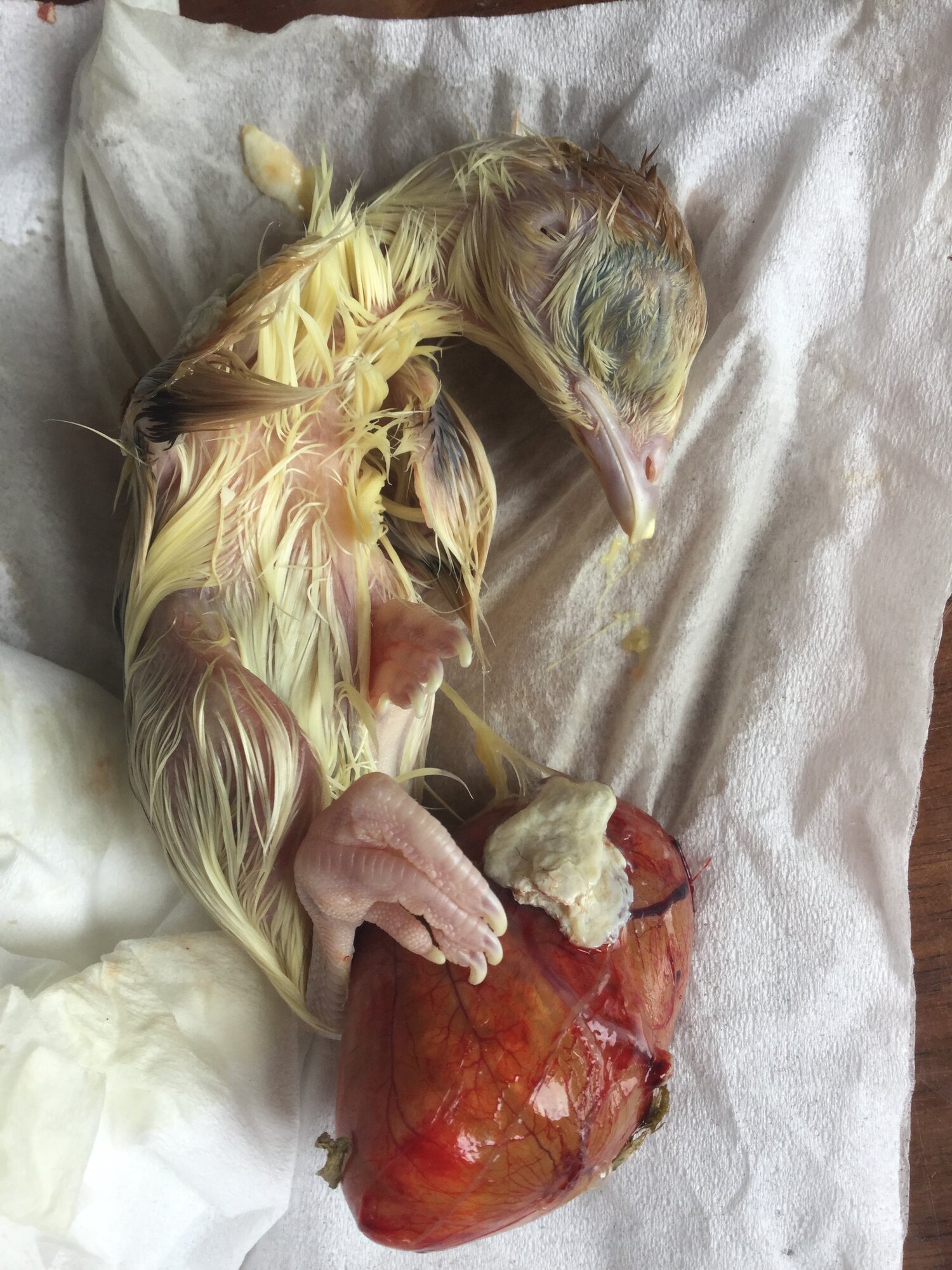 Those are unabsorbed yolk sacs.

Something must've went wrong during incubation.

Are you assisting the chicks out of the shell yourself? Chicks, usually do not need assistance, and the ones in the photo have been assisted way too early. The large mass you see is not a hernia, but their yolk sac.

Chicks that hatch with an unabsorbed yolk sac often fair a grim prognosis, as the exposed tissue does a good job at inviting bacteria in, and yolk material is an excellent growing material, so these chicks often die of bacterial infections (Omphallitis). If they do survive, they oftentimes succumb to other conditions, and diseases due to their weakened immune sytem.

Any chick that you have where the yolk is similar in size to the photo, I would personally euthanize as it's very unlikely they'll make it. If you have some with smaller sac, you could set the chick in a cup, lined with dry towels. Keep it in a humid incubator moistening the sac with sterile coconut oil, or ointment as needed to keep the tissue moist.

You would not want to try to push the tissue back in or touch it much or the sac may rupture, and bacterial contamination may occur.

I wasn't assisting them, except the one in the photo, as it had died in its shell. I'll set the others up as you've said and hopefully they'll be alright

maybe having different sized eggs (I assume turkeys are bigger) confused the broody?

I should also add that there werena few times when I went to candle the eggs and found some of them had been accidentally left out of the nest. I hadn't thought it was a problem, as I had a hen once get trapped away from her eggs for a whole day and they hatched completely fine, but I guess they weren't fine in the end

Chick just hatched, has a hernia size of pencil eraser