Well, this started on Tuesday. She was acting funky and when I went to examine her for injury, immediately noticed that her crop was HUGE. She was lethargic and it scared me, so I took her to our vet. They agreed that she had an impacted crop, and gave her IV fluids, and then tried to gavage her crop out. Basically this involves flushing her crop with saline while holding her upside down, in a effort to get her to regurgitate the mass. (I know it sounds bad, but this is the suggested treatment that 2 other vets have agreed is the typical first course of action according to vets).

After they had her for 6 hours, they called and said that there had been no change, they had not been able to get the mass out, but they gave her an injection of antibiotics and were sending her home on antibiotics and an antifungal, because whatever was in her crop was rotting to high heaven. (cost= $200)

I brought her home, and for the last 3 days (Tues, Wed, Thurs) have given her the meds, have syringe fed her pedialyte, and mineral oil, and have massaged the crop for 2-3 times a day, for 30 minutes or so each time. NOTHING. No change. But she is starving, and is wasting away. Vet continued to suggest this whole time that I continue doing this, that sometimes it takes a couple of days.

So this morning I call another vet, who agrees with that course of treatment, but also agrees that it is not working. I bring her in. She is not well, and starting to be "gaggy". I basically tell the vet we need to do surgery or euthanize her. The vet feels that this may be more than just an impacted crop, due to his exam, and the fact that she has always been much smaller than her same age/breed "sisters". She gives her slim odds of making it. They do the estimate for surgery, that comes back at $300-400. I sadly tell them that they should probably euthanize her.

I hate that! I hate making the decision to end a life. It sucks. If we had millions I would have said, well do the surgery. I hate that it comes down to money or a life. Unfortunantly, we spend so much money on my children's medical care (a son with 12 specialists and major medical issues after 2 open heart surgeries, and a daughter with Crohn's disease now in remission) that we just can't do whatever we want to do with our pets. (Though this is why our dog has health insurance! He has major allergies and I give him antigen injections at home- sigh- even our animals can't be healthy! They won't insure chickens-- I checked

Anyway, the vet comes back in and says, go ahead and sign the euthanasia papers, and pay the money ($70 exam and euthanasia) and that she is doing the surgery anyway. She wants to see why her crop is so huge. She says if it is something obvious like a big peach pit or whole mouse (!!) or something then she should recover. But if it is just normal chicken stuff (feed, bits of grass, bugs, etc) then it is a whole digestive system problem and she will euthanize her during the surgery. The vet has very slim hopes that she will come out of this alive.

I left in tears, feeling horrible, and mostly feeling so sad for my 5 year old who will be devastated. I went to my parent's house and dug a whole in the "pet cemetery" part of the property, then picked up my daughter from school and we made a headstone out of a rock that she wrote her name on and drew hearts on. DD is doing better than I thought she would, but she knows the hen has been sick and I have tried to prepare her that this may not have a great outcome.

Anyway, we are just waiting for the word from the vet as to what they found, and what the final outcome is. Just wanted to share with you guys who understand. My friends, family and DH think I am crazy.

Here is a pic of her-- she's the one on my daughter's lap-- she's my daughters FAVORITE, and though they all are ridiculously gentle and sweet, she is the MOST and the most tolerant of being wrapped up like a baby for hours on end. 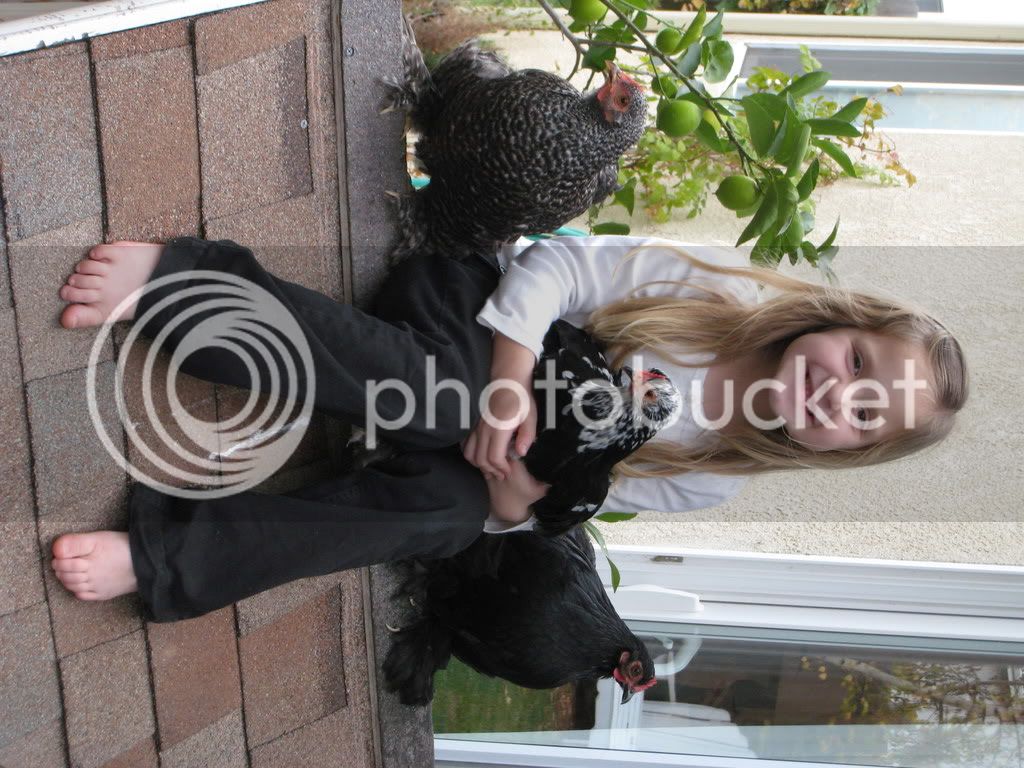 I am so sorry. It is a heart breaking story but I am praying for a happy ending. Maybe the vet will find something that can be removed and the chicken can recover. Keep us posted. I feel for you - it's always a hard decision to make.

Oh Leanna I'm feeling your sadness but I'm hoping things do turn out okay. I feel the same way you do about animals and my family thinks I'm crazy although DH understands and knows how much it all means to me soo...

And I also have my special needs little man who is 8 years old. I don't work so money is very tight and yes it STINKS that it comes down to money or a life. Not fair. You and I both know all about life bot being fair. Let us know what happens :aww

Cara
ps my Bassett has allergies too, but we've finally found the only dog food that he doesn't rub his chest raw dragging it on the carpet, Nutro Natural Choice-chicken, rice and oatmeal.

I am hoping/praying for a happy ending

!'m so sorry! She is so beautiful!

What a heartbreaker! She is beautiful, and I hope she pulls through in spite of the odds that seem to be stacked against her.

Oh dear, I hope she makes it through. Such a beautiful bird

I am so sorry. I hope and pray she pulls through. Your daughter looks like a very nice young lady.
Last edited: Mar 14, 2008

I had a very sick hen - Betty - who had a hysterectomy (internal laying issues with increasingly bad infections) and died 2 hours after waking - the vet said she was all alone when she died. Before the surgery, I had asked the vets office if her best friend BJ roo could be in a cage next to her when she woke up (and I was willing to pay for this)- they said NO. Betty was terrified of vets and I feared the combination of being ill, fear of strange places and the stress of the surgery would kill her. Even if she wasn't ultimately going to make it I wanted her to be with her best friend when it mattered most.

When I went to pick up her body - devastated that she died alone - I told the vet that medicine will not really have advanced until the medical community looks at the emotional as well as physical aspects of healing. I believe Betty may have lived if she had woken to BJ roo's comforting purring sounds (he was such a huge comfort to her and they were deeply bonded) instead of waking all alone in a strange place and possibly panicking during the 2 waking hours before she died. I relive this terrific sadness to let you know about it in case your hen makes it through surgery, is terrified of strange places, has a best buddy and might benefit from the company of this buddy. This combination of things may not be your/her situation but just in case it is...

When I think back, I wish I had been more insistent - bribing if I had to - to get them to accept BJ being near Betty during he most difficult time of her life.
JJ

The vet just called and said she is alive!

She is normally about 2 pounds in weight and they pulled 12 ounces of sand out of her crop!

We have a sandbox in the backyard that she must have gorged on.... I am so surprised, as they have grown up with it there! Anyway, I will be covering the sandbox! I am picking her up at 5 pm my time and they say she should be OK!

So, we will see how she does during the recovery period.

I am so surprised that the sand would have been THIS MUCH of a problem. How do they go through the grit like crazy, but have problems with SAND? And here, I thought I was super careful with them........sigh........it is always like this at our house!

super happy! Thanks for all your thoughts and prayers!

Persistent Diarrhea - No Parasites or Lethargy