Chickens will not leave coop

Anyone else have chickens that do not want to leave the coop?
I have a few chickens and a rooster that are just over a year old. I have opened the coop door to an unfenced yard but all they do is look outside. It has still been cool here, I am hoping they will come out on their own. Maybe they are just chicken.
K

I live in Michigan. We get very cold winters. I have always kept the food and water in my chicken run, and my chickens free range 365 days a year (even in snow!). They absolutely love to be outside rather than in the coop. In the mornings, as soon as they see my daughter through their window walking to the coop to open the pop door, they all start jumping off the roosts and line up at the door to come out. The only time my girls go into their coop is to lay an egg or sleep. They LOVE being outside and are very unhappy when I have to confine them to their run on days when it's storming or the snow is too deep. Do you keep your chickens locked up in the "coop" all winter?? 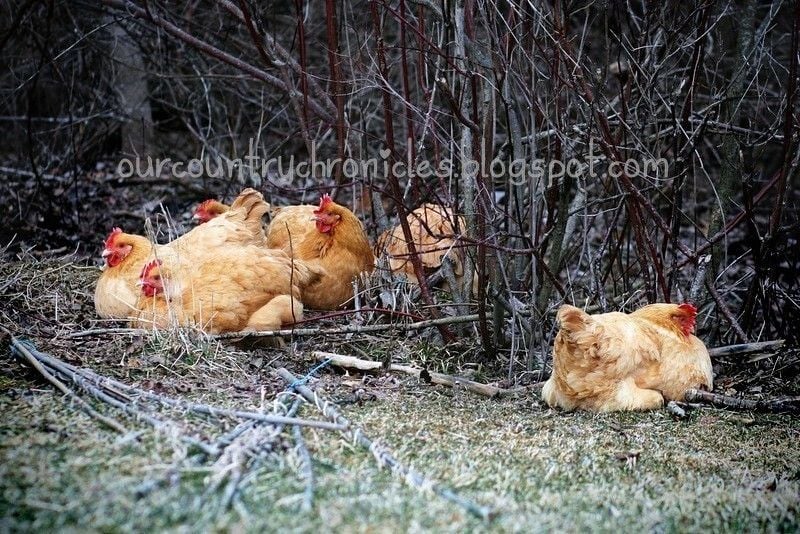 These chickens have just turned 1 year old. I will have no problem letting them out in the winter (if they will go). My problem is they don't seem to want to go out. perhaps they don't know what they are missing, it is a few steps from their coop to the grass across a set of wooden stairs so they may not see any reason to go out yet.Maybe I can bribe them out by leaving something at the doorway until they get used to coming out.
K

So your chickens have never been out of their coop??

Never! They were raised in a brooder inside and have never seen the sun (other than thru a window). They just peek their head out, if they don't venture out in a month I am going to throw them out and lock the door for the day. I think they just don't know what they are missing.
K

Awwww....those poor things. Why don't you just open your coop up and take each chicken out so they can get the feel of grass between their toes and some fresh air?? Don't you have a fenced in run for them?

Wow! I can't believe they were inside for a whole year! Usually by the time they're feathered out, as long as the weather is warm, they start going outside at least for the afternoons. Our 8-week-olds are already big to be indoors, but the evenings have been cool and we need to add an extra roost to the coop so they're room for them with the year-olds.

Were they closed in this coop the whole time? Or did you have a big space inside for them? Or did you get them from somewhere else? They're probably a little afraid of the wide open space. Our chicks always are the first couple times they're out.

Our year-olds have been in the coop since they were about 3.5 months old. They have the coop with an enclosed (hardware cloth/chicken wire) run so they come in and out from early morning to evening. When we can be outside, they also get to free range in our unfenced

Do they have an enclosed outside run? Or is it just the coop in an unfenced yard? If you can do even a simple run (2x4s or PVC covered in hardware cloth or small chicken wire), it will give them a safe outside space.

Obviously it's unusual to hear of chickens a full year old who've never been out. As suggested above, I'd carry them out and put them in the grass. They may take a while to get used to it. But they need to scratch and explore!

Let us know how it goes getting them used to it.

We let our girls go out whenever they like. I lock them in when they're all in the coop sleeping, and let them out first thing in the morning. They don't always go out. When it's snowing, raining, or just cold they stay in the coop.

The chickens were raised in a very large indoor coop until mid winter. Then I split the them by breed so I could try hatching a few. So now the RIR are downstairs with access to outside. Last week I finally had enough so I got the rooster and placed him outside. He just stood there for quite a while with the chickens inside calling to him. Eventually the two chickens joined him. They have come outside every day since for about 20 minuets at a time then head back inside. At this time it is totally open and I let them out all day and close it at night.

We have 3 barred rock hens we inherited with the coop from my inlaws. They are 3-4 years old and went out at their place. When we got a run set up at our place, they never went out. It was 5 months before we figured out the problem There are multiple places we can put a ramp to the outside in our coop and it turns out they didn't like the ramp position we used. Once we switched it, out they went and they are out from sun up to sun down now. I think they're just quirky.

How do I start free-ranging my chickens?
2

Leaving the chicks with a pet sitter

P
Would they be okay
2