I got the call at 7am that my chicks were at the PO finally!!! They shipped Monday from MPC and I couldn't be happier right now!!! Not only are they all alive, but they're running around and very social! It's Christmas morning for me right now!!!

Oh, and on top of that, we're in the middle of a snow/rain/ice storm and not one was DOA! They separated the 30 chicks in the box onto two sides. Both sides were heavily packed with straw with a couple of vents on the sides and top. Plus, they sent me 2 extras! As I was taking them out of the box, they were jumping out at me! They're all pooping, drinking, and eating... with a couple that randomly pass out on the stuffed bear I put in there!

Now, I just need to figure out how to put pictures on here and I'll show everyone my new babies!!!

Wonderful! Congratulations! What kind of chicks did you get?

Yeah! Congratulations! I'm thrilled. I'm about to place my first order with MPC and I'm just wringing my hands not sure how many to order because I don't want too many, but I do want a certain number of each breed I'm getting, and then I have 3 young kids that would just be heart broken (and me!) over any deaths.....

I can't wait to see pictures! I agree, what breeds did you get? 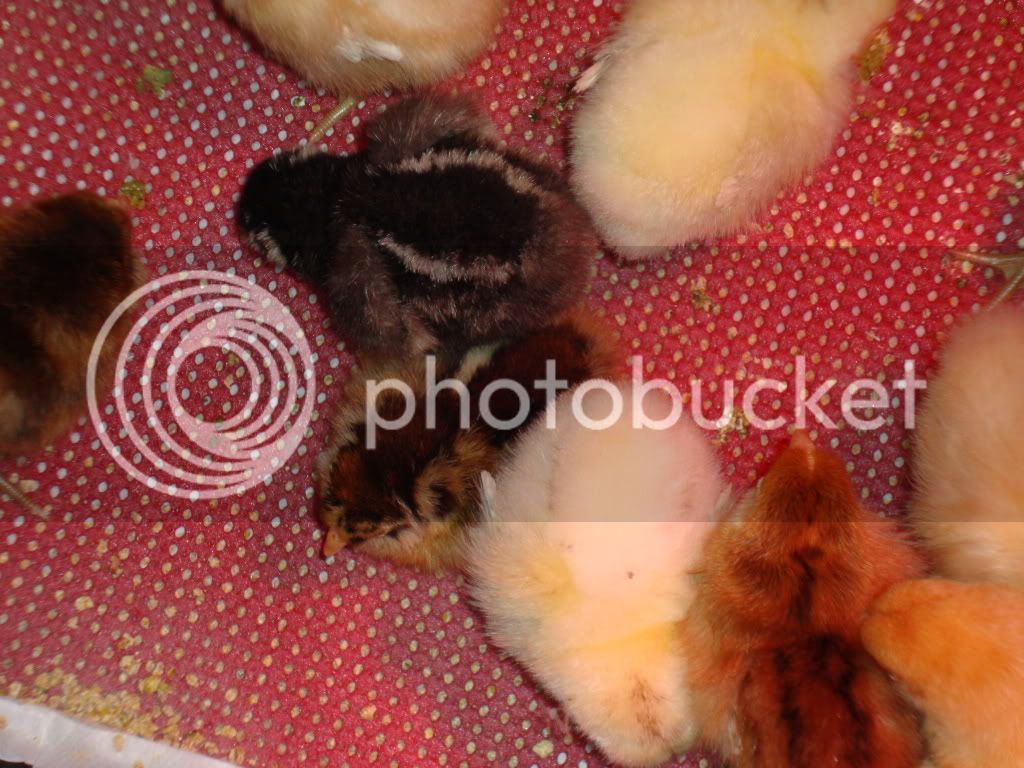 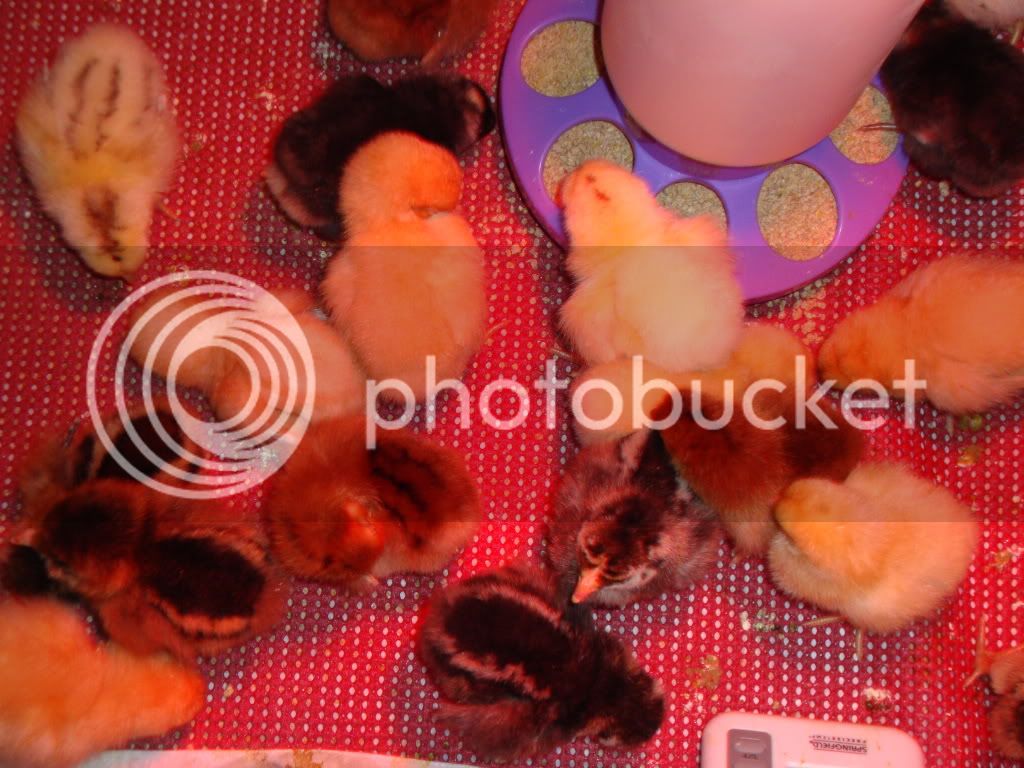 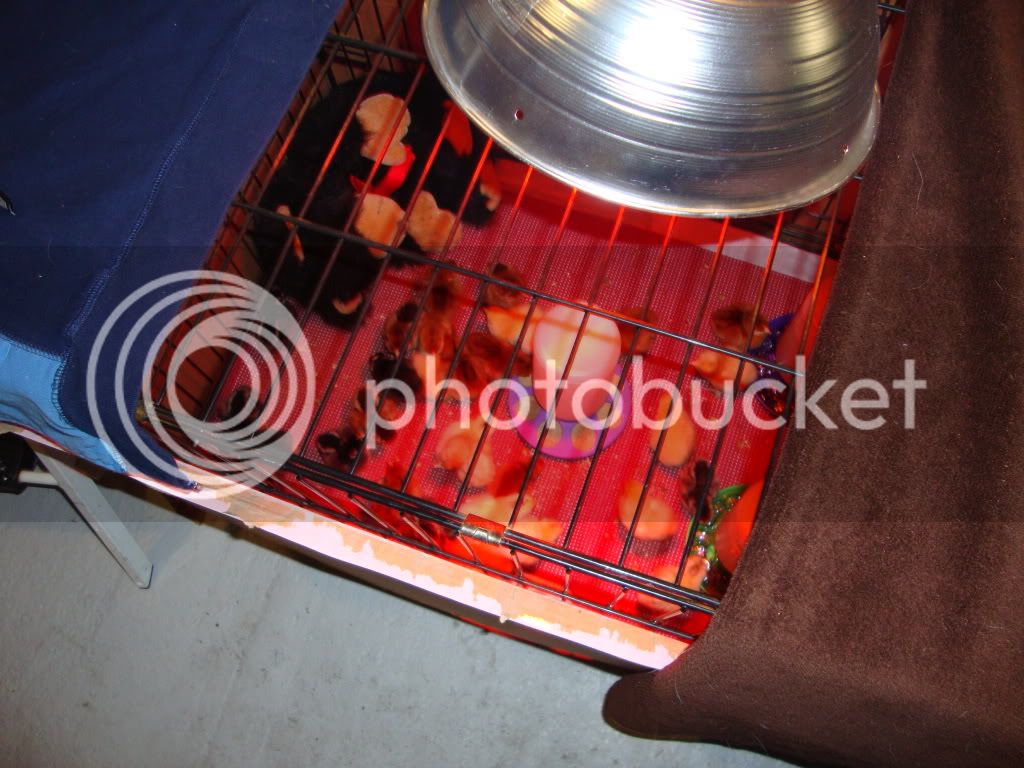 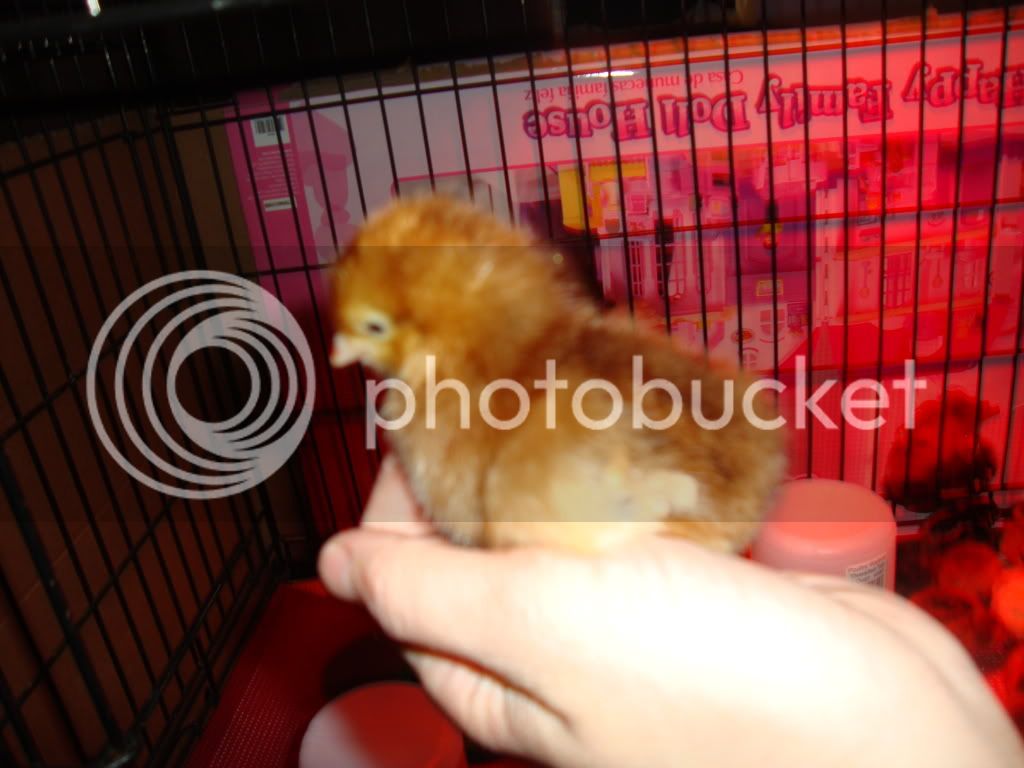 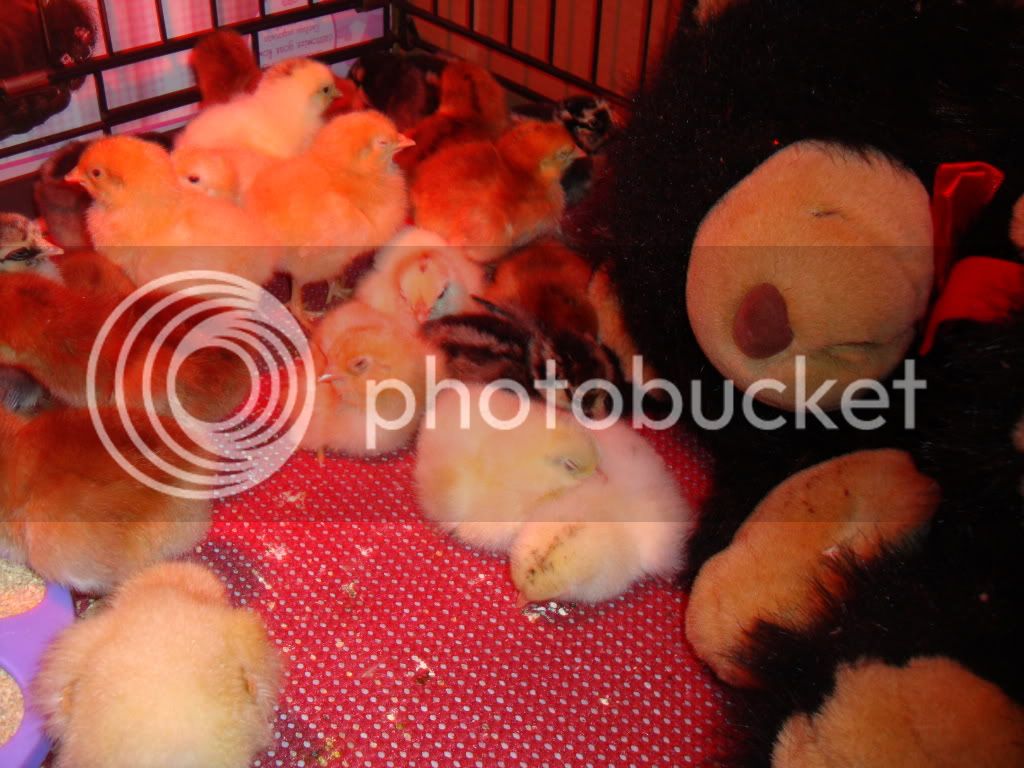 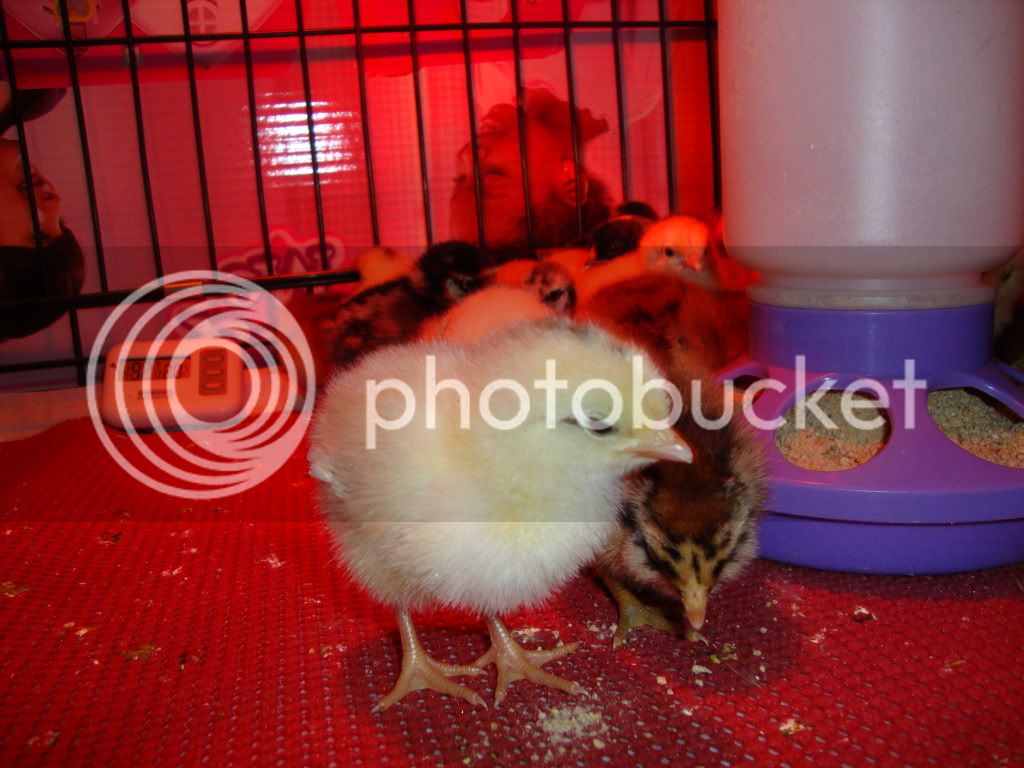 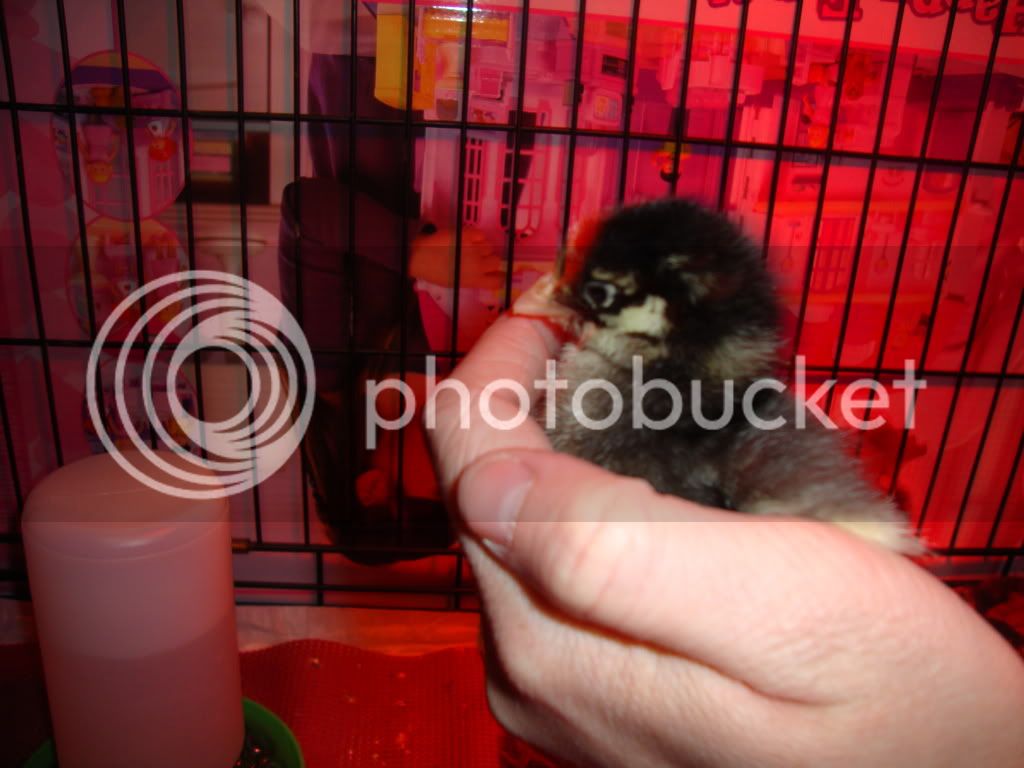 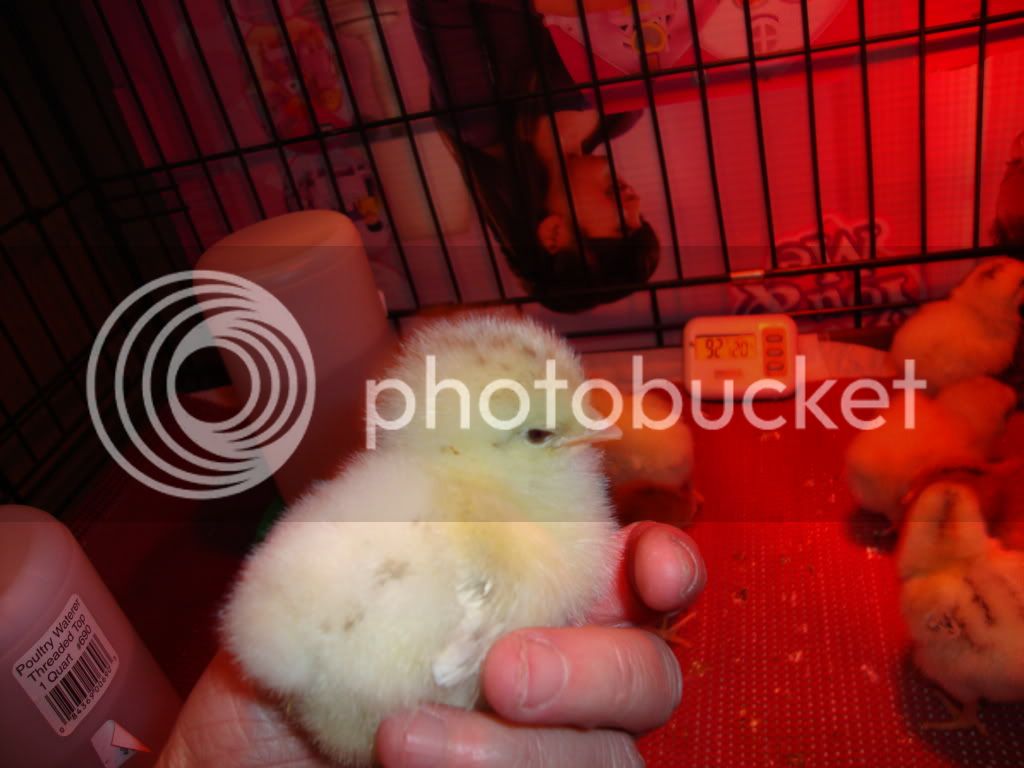 The funniest part of having them is how they run around like crazy and then just stop to poop... which is much noisier than I would expect from something so little! Don't care though... I'm SO in love!

Oh my gosh, I'm SO jealous...they are so cute! I want to come visit them, but I bet I would try to leave with some in my pockets

So glad they were all alive for you! It is only raining here so far today, but it's so yucky and cold out. Keep them warm with lots of snuggling

It was all snow this morning when my hubby left to plow (1:30am ish), turned to a lovely snow/ice mess, and now it's pouring!

So this might be a stupid question, but is it normal for the chicks to already peck at each other? I know that it'll happen, but there's one little peanut that is just making her way through the crowd pecking everyone she comes near! Also, is there a trick to holding them to clean their little pasty butts? I only have one so far that has had a little stuck, but I just don't want to hurt her while I clean everything off!

Also, there's typically a few that are sleeping off to the side until one meanie jumps all over them like a little chick pile! (obviously it's not a pig pile!!!) I've been just watching them all day now! They're so funny!!!

About the whole "stealing my chicks" thing.... I think I have a little OCD because I keep doing head counts to make sure everyone's there, not like they can get out anyways!
W

They are super cute!

I put some of my bantams in a dog crate like that and they could squeeze through at 6 weeks of age so maybe get some hardware cloth to put around it so prevent escapes or some card board will work too!

I've got cardboard around the sides, but have a slice on one side so I can open the door. I just duct tape it closed when I'm done playing with them. Figured it was the cheapest route to take since my dog outgrew that cage. Plus, I don't have to worry about the light falling on them...

Quote:
CrazyMom - what is that you are using as the bedding/floor material...... it looks kinda like a rubber mat - is it rubber or cloth?

I got some brooder boxes today!

I Bit the Bullet and Ordered Chicks
5 6 7