I was expecting peeps to hatch on Tuesday, but one of the two eggs was already pipped Sunday night. Monday morning, I woke up to the sound of appliances suddenly turning on. Looked at the clock, which was flashing 12:00. C*@P!!! There was a blackout! My first thought was whether the kids were late for school. When the cable box clock showed the correct time, I saw that it was still early. But then it hit me like a ton of bricks... The incubator!!! I rushed to the bator and my heart sank when I saw that the temperature on the digital thermometer read 76F. Then I felt even worse when I saw that the second egg was pipped. Well, I figured I might as well wait a bit to make sure they were thoroughly dead before tossing the eggs. After a few minutes, the temp jumped right back up to 100F. My daughter got up and asked about the eggs. I said they probably didn't survive the blackout. She went over and shined a flashlight into the bator. She said that one of the eggs shook. I went in and heard peeping! YAY!!!!! I guess the power hadn't been out for very long.

Early afternoon, out of the smaller of the two eggs popped a beautiful little perfect chickie. As the day progressed, I was losing hope for the second egg. It wasn't progressing at all and the first chick was body-slamming the heck out of it. I eventually moved the first chick into the brooder and checked the egg to see if there were any signs of life. There were! I quickly put it back and soon after the kids had gone to bed, second chickie hatched no problem.

I took these photos last night: 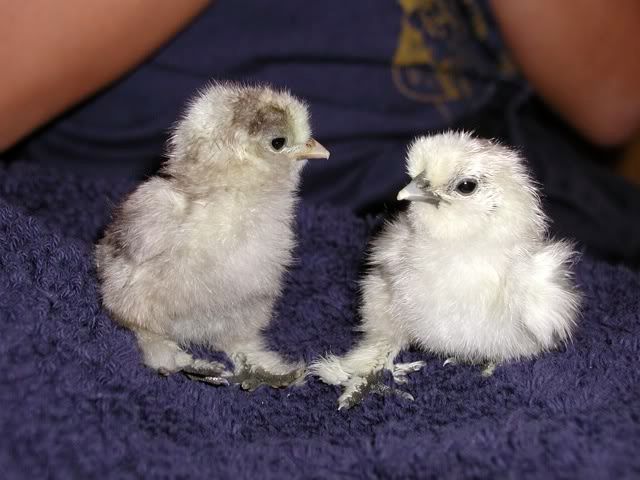 Here, they're napping in my daughter's hands: 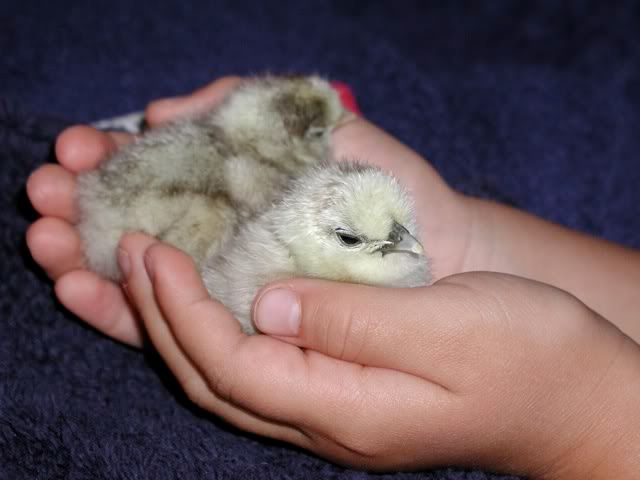 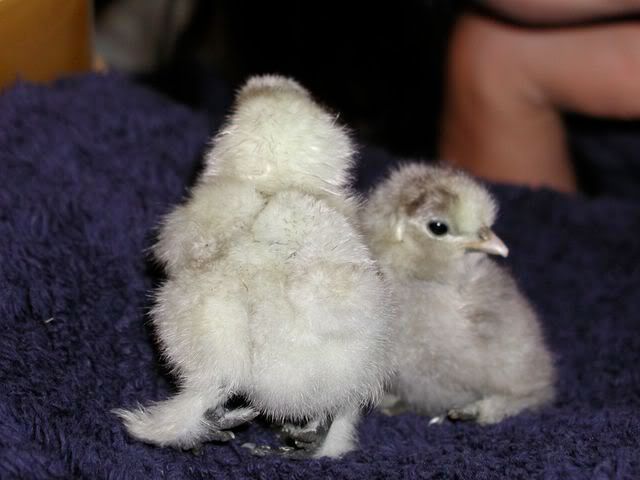 They are SOOOOOOOOO cuddly!!! And I hatched them out of a fellow BYC member's eggs. I was sent a dozen from clear across the country, but clearly they were mishandled by postal workers, seeing as how one egg broke and a lot of air cells were ruptured. They were packed extremely well, too. Still, two is my record for shipped eggs. Never broken that number yet, even with in-state shipped eggs. Maybe I'm just really-really bad at this. It's sort of a good thing, though, seeing as how we have a tiny yard and no coop

Beautiful chickies! They are actually tougher than you would think. I had a duck that seemed to lose interest in a nest. Later, I checked and all of the eggs felt stone cold (temp dropped to about 40 degrees that night, mom was off of the nest for a few hours). I decided to candle the eggs to see if there was any development before she abandoned them, and was shocked to see movement in the eggs! Put them in the incubator, two days later six of the seven hatched out. Them temps dropping like you had was probably no worse than when mom gets off of the nest for a little bit to go eat.

I've never been much of a silkie person, but these two have won me over. Probably also helped that they weren't vaulted

. Vaulted skulls have always freaked me out, and my kids would call them "brain-heads."

Yes, it's shocking what mishaps eggs can take. I guess it shouldn't surprise me that much, considering that eggs can take shipping at all. It'll be so much fun when I can incubate eggs from my own chickens and get a better hatch than two out of a dozen

. Hopefully, I'll have a coop set up by then

L
So many dead in egg

My two from the weekend