We are in the process of finishing up our coop and need ideas for latches that are easy for kids to open and close, but difficult for raccoons and other predators. We need a latch for the chicken door, the main door, and the nest box lid. Ideas or pictures of your that you can share?

i just use padlocks

In a word, "Carabiners."

Get the cheap ones that have spring closures. The raccoons can't figure them out and they are easy enough for children to use. There are different size ones that fit most latches. Several of my sons do rock climbing and have the load certified types that lock closed, you don't want those. They are too expensive and too cumbersome to open. The non-locking type, which have a spring loaded gate, are inexpensive and easy to use. After removing one from the latch, they are easy to attach to the door handle so they don't get lost. These can be found at any sports store, Walmarts, Target, and anywhere camping equipment is sold.

Of note, while carabiners are effective in keeping out four legged predators, they are not so good at restricting the two legged predators. That level of protection is best handled following Mohillbilly's advice, above.

I realized I did not answer your question. Here are the latches on my coop and on the run. The latch on the run is actually a gate latch, but they work so nice, are easy to secure, and are somewhat forgiving on the alignment. Note there is a wire off the top of the latch going into the run. Had to wait 20 minutes one evening when the door blew shut behind me before the DW came out to see what was taking me so long. It is embarrassing being caught as a dumb cluck. Anywho, here are the picts of the latches I use, complete with the carabiners: This is Libby, one of our two Easter Eggers. Libby seems to be special needs, as it doesn't appear her elevator goes all the way to the top. Still a good hen, just on the strange side, as chickens go. She was watching me take the latch photos. Tweakster or anyone else with gate latches, do you have any tips on getting the gate latch to latch behind you automatically, when the door shuts? My door shuts completely on its own due to a strong spring but the latch rarely drops down to lock it. I keep fiddling with the wire I've got on it as it seems that is preventing it but can't seem to fix it. I have to pull it down manually.

Me thinks you're stuck manually closing the latch. If you take the wire off it will work again, but you will get locked in the run. My gate latch also has a wire into the run, as you probably saw on the photo, and it will not automatically close with the wire. Without the wire gravity does its job well in dropping the latch when it closes (which locked me in the run once!!), but that doggone wire counters that action and it doesn't work automatically.

There are a few work-arounds I have considered, but not tried:
1. I have wondered if replacing the wire with fishing line might reduce the friction enough that gravity would, once again, take over. Fishing line is slick, light, and flexible.
2. Cut a small, angled block to mount under the gate latch that would tip it forward just a bit, increasing the pull of gravity on the latch in the open position.
3. Drilling the hole out some more in the door frame so the wire doesn't rub. I am considering a 5/16ths hole in combination with fishing line.
4. Putting a very small loop in the wire, an inch back off the latch, and attaching a small spring to the loop and again to the front of the latch body (drilling a small hole). This would pull the wire forward, but there is a balancing point. The spring would have to be strong enough to pull the wire and latch closed but not strong enough to limit the door arm from lifting the latch as it closes.

With my gate latch the wire drags through the hole in the wood and prevents the latch from dropping on it's own. Like you, I have played with the wire, bending it this way and that, but to no avail. One jerk on the pull wire from inside the run and all the fiddling with the wire is for naught. The pivoting latch piece cannot be modified easily to add weight in the right place. Can't drill a hole and bolt on more weight as it would block the action of the latch. Can't hang a weight on the pivoting latch piece because it would block the door arm from entering the latch. I considered using a heavy soldering iron to add solder (weight) to the pivoting latch plate but deemed this as borderline obsessive-compulsive. Besides, it would ruin the finish and I'd have to repaint the latch, which would no doubt gum up the whole shooting match and I'd have to replace the latch.

The more I hash this one out in my mind the more I'm thinking drill out the hole through the door frame and try fishing line instead of wire. Everything else looks too borderline OCD.

I'm looking for a latching system for my coop...I like this one: 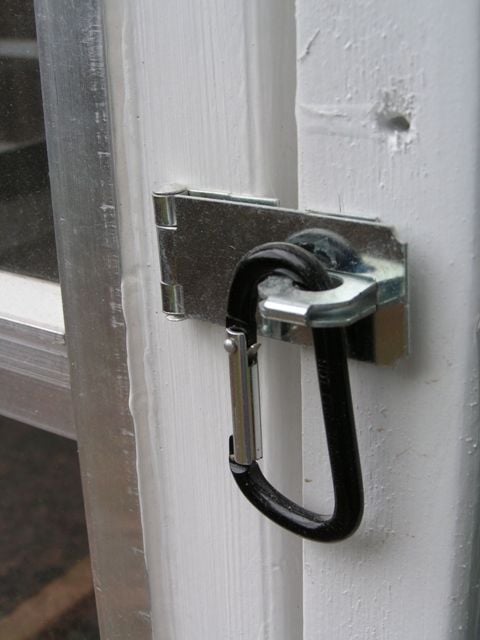 After a lot of reading and research I decided on this type of lock and latch system.


Closed and locked with a carabiner. Unlatched with the carabiner hanging on the built-in door handle. I used aircraft cable so I could unlatch the catch from the inside.

I have no issues with the wire keeping the latch from catching.. I did a lot of testing before I drilled the final hole for the cable..
In the end it took a larger loop and a hole drilled much higher than I originally thought. Everything runs super smooth. View from inside of the run. This is the second latch I added to the outside of the run so I could hold the door open for the kids when they free range. You got it right! Because you used aircraft cable and located it high above the latch, the spring of the cable holds the latch closed. The longer hole through a 4x4 post adds support to the aircraft cable and helps provide extra spring. Very well done!! From the interior attachment point, to the connection with the latch, to the second latch to hold the run door open, I luv it all! It appears you got the KISS principle down very well. I am convinced there is a special beauty in simplicity, and you nailed it! I may not be bright enough to come up with all the right answers, but I CAN recognize them when I see them.

These are the kind that I use.